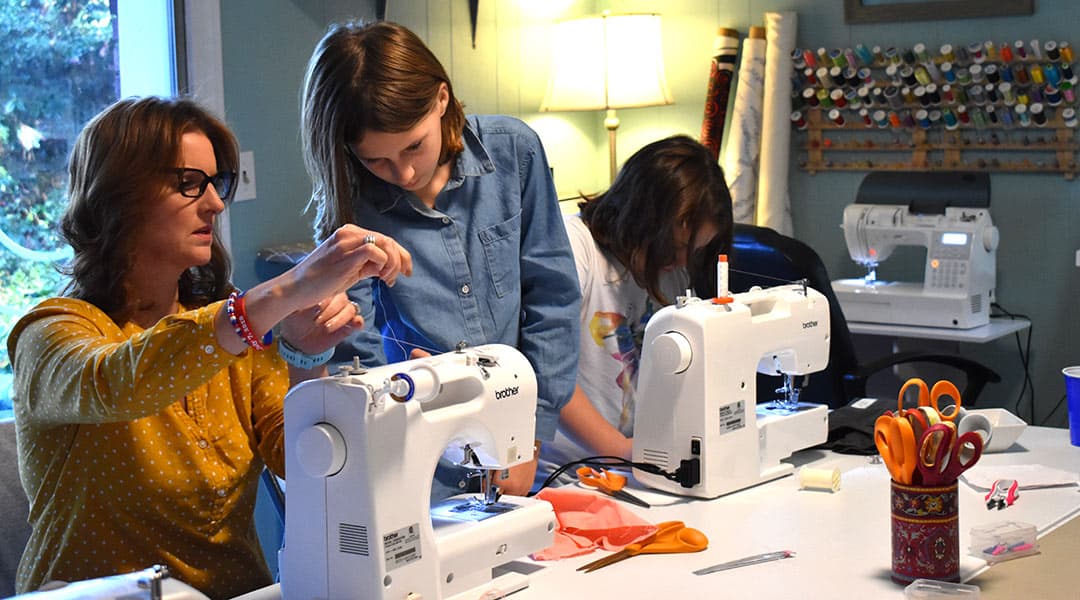 Growing up, Victoria Fleischer loved visiting the fabric store with her mom and grandmother and watching them sew clothes, but she didn’t learn the craft until she was an adult.

Today, Fleischer teaches the next generation of young sewers at her in-home Columbia studio, Bella Lucca.

After Fleischer got married 20 years ago, her mother shipped her old sewing machine 3,000 miles across the country as a wedding gift. Fleischer started teaching herself how to sew, a process she characterized as “a lot of learning, messing up and trying again.” It wasn’t until 10 years ago that she began sewing professionally.

The art of sewing often skips a generation and Fleischer sees that in her own life and in the mothers of her 24 young students.

“The students’ grandmothers sewed and then the mother, kind of my generation, never learned,” Fleischer said.

Jenifer White, manager at the Creative Sewing Machine Center in West Columbia, has noticed the same generational gap with her customers and students. Throughout her 15 years of working at the store, White has recently seen a growing interest in sewing and considers it a growing industry.

“I think for a lot of years people kind of steered away from sort of those creative outlets,” White said. “We’re seeing a whole new generation coming back finding it again.”

Fleischer said one reason for this change is that sewing has shifted from a necessity to a creative hobby. She said her mom sewed clothes because it was the most affordable way to clothe her kids, which isn’t the case today.

“When we became adults, it was also the influx of Target and big department [stores] where you could get clothes a whole lot cheaper,” Fleischer said.

With an increase of fast fashion, or the rapid production of clothing for mass-marketed retailers, it has become more convenient and cheaper to purchase clothing at stores. The term fast fashion was coined in 1990 when Zara, a Spanish clothing company, opened its first store in America and promoted their 15-day clothing production process from idea generation to creation. Today, Zara remains a leader among fast fashion retailers.

With an increase in online shopping, consumers’ shopping habits are characterized by quick, convenient and inexpensive, qualities that are not equivalent to sewing a dress or pair of pants with detailed McCall’s or Butterick patterns of decades past. Since the need to sew clothing is a thing of the past, Fleischer and White have noticed that students seem less interested in making clothes. Instead, students are seeking more creative projects, like creating quilts or handbags.

“The grandmother generation might have enjoyed it and were good at it, but they were doing it out of necessity,” Fleischer said. “That’s what you did [then], rather than I think now it’s fun and fashionable.”

Sewing is typically considered a women’s craft, but White has recently seen men coming into the store who are interested in sewing projects.

“That’s something that we’re seeing a big change in because 15 years ago when a man would come in, we knew he had a ‘honey-do’ list,” White said.

Instead of the wives sending their husbands to the stores to pick up supplies, White said she has noticed wives tagging along to pick out fabrics while the husband is the one sewing the items. She said recently one man took a sewing class to make a blouse for his wife and came in later with his daughters so they could pick out fabrics for him to make blouses for them too. She has another regular customer whose wife picks out the fabric while he sews clothes for their baby.

However, White said male customers aren’t always making clothes for their families. More often, they are buying sewing machines or supplies for a start-up business or home projects.

White thinks sewing is becoming more popular because people enjoy being their own designers and having the freedom to customize an item that they can use in their daily lives whether it’s a decoration or accessory.

“I have people come in all the time and say, ‘I didn’t even know people still sewed,’ and I’m like, ‘Well, I don’t know where you’ve been because it’s a huge business,’” White said.

Fleischer’s Thursday afternoon class of five second graders snacked on gummy bears and goldfish as Fleischer explained the project of the day. The students bring their own sewing machines and Fleischer provides the fabric. In this class, they were eager to sew a decorative pocket onto a T-shirt and scattered around the room to pick out fabrics and thread.

While they wanted to finish the project in time to take it home, Fleischer kept reminding them of the motto that hangs in her shop, “Don’t worry, we’re not in a hurry.” 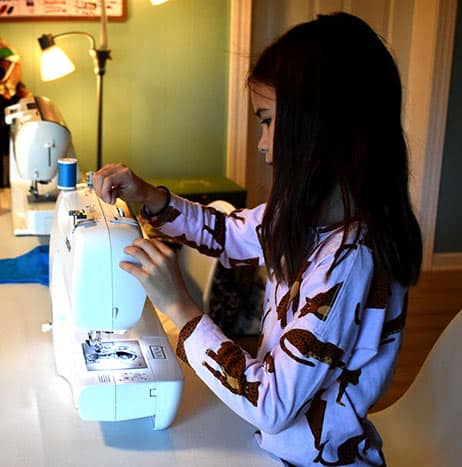 The students bring their own sewing machines, but all other materials are provided by Fleischer. They get to “shop” through her selection of fabrics that she’s collected from donations and local stores. 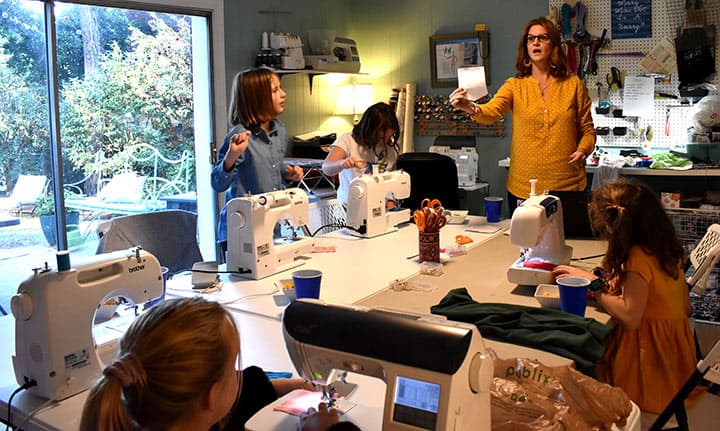 Fleischer teaches the same basic sewing lessons to all beginners, no matter their age. 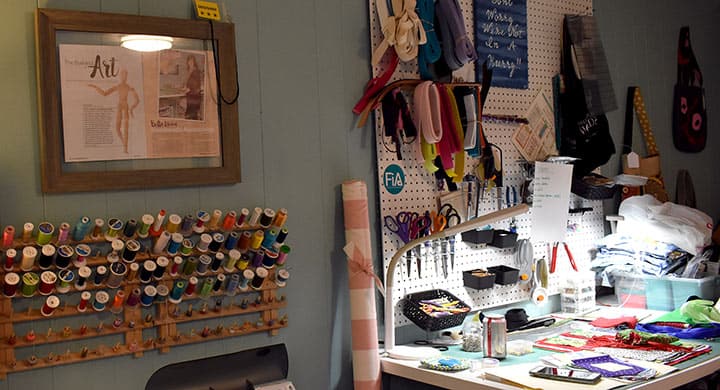 Fleischer’s in-home studio provides a workspace for her to host sewing classes and work on her own sewing projects.