Staley’s Gamecocks control “own destiny,” secure No. 1 seed in the Women’s NCAA Tournament 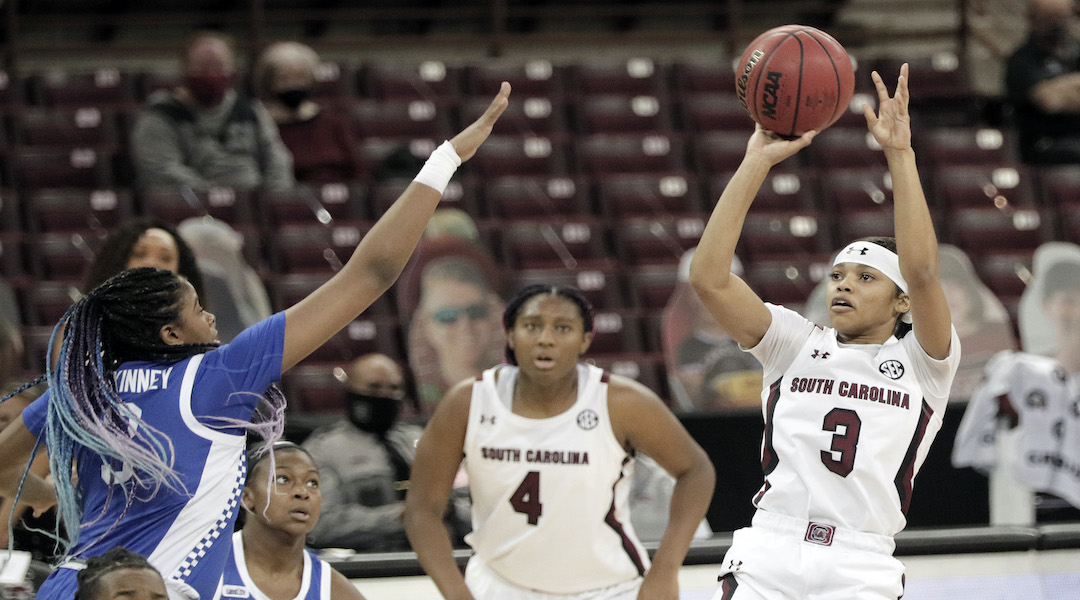 A year ago, the women’s basketball team at the University of South Carolina was an overwhelming favorite to win the NCAA Tournament. On Monday, the team got one step closer to avenging the lost season.

The Gamecocks secured the No. 1 seed in the Hemisfair Region and will take on Mercer, the No. 16 seed, in the first round of the tournament Sunday at 6 p.m.

Coming off of a SEC Tournament title and a regular season schedule that was the toughest in the nation based off opponent winning percentage, head coach Dawn Staley feels confident about the team’s chances.

“We got an uphill battle that we feel real good about, and we control our own destiny,” Staley said. “If we don’t beat ourselves up, I like what we’re doing out there on the floor.”

Destanni Henderson is the only player on the current roster from South Carolina’s last NCAA Tournament appearance who played more than 10 minutes per game.

Staley expects there to be a bit of a learning curve for the younger players but thinks they’ll be able to adjust quickly.

“This is their first time going through an NCAA Tournament game, so I’m sure they’ll have some jitters,” Staley said. “Hopefully it won’t be for long, and we can jolt them back into being who we were when we won the SEC Tournament championship.”

Some players, like star sophomore forward Aliyah Boston, have found some positives in the inexperience by enjoying the tournament seed selection process.

“I was so excited,” Boston said. “I had my phone ready to record everybody’s reaction. I was like, ‘This is the best time of my life.'”

It’s not just the lack of experience in the big dance either; this Gamecock team is much different from the one-loss team of a year prior, according to Staley.

“I think this team’s identity is a lot different than last year’s team. This team is just continuing trying to figure it out. Last year’s team really knew what our potential was and how to cater to that,” Staley said. “This year, we’re just trying to figure it out, and they’re just trying to find their way, just play their best basketball on each day and not look ahead and just be in the moment… They have no idea about how to win a national championship, and we just have to bring them on along.”

Something that all 64 teams in the tournament will be adjusting to, not just the Gamecocks, is the “bubble” atmosphere of the site in San Antonio, Texas in response to the coronavirus.

Attendance will be limited to team guests for the first two rounds, but the NCAA will allow a capacity of up to 17% from the Sweet Sixteen on. Masks will be required.

To make the quarantining part a little more bearable, Staley said the team is bringing basketballs for everyone and she plans on conducting informational and exercise Zooms to keep all the players in shape.

“We don’t want them lying in bed for 16 hours, we want them active and doing things and getting their minds right for what we’re facing,” Staley said. “Bottom line, this team wants to play, so they’re going to do what we’re asking them to do to play the game that they love and during their most exciting times of their college careers.”

The team left for San Antonio early Tuesday morning, and everyone on the team has negative COVID-19 tests as of Monday. 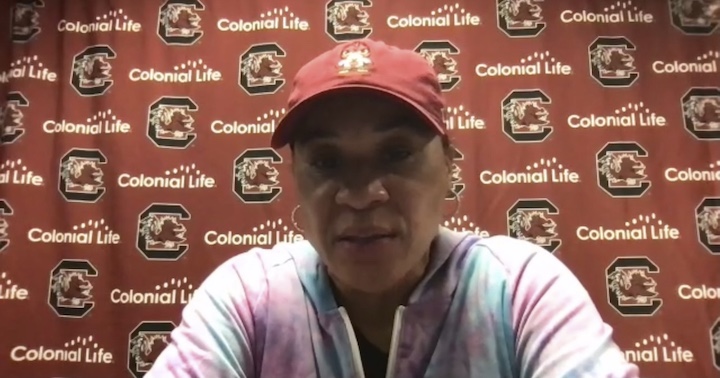 Dawn Staley is getting ready for her 9th NCAA Tournament as head coach of South Carolina women’s basketball. Photos by: Matt Tantillo 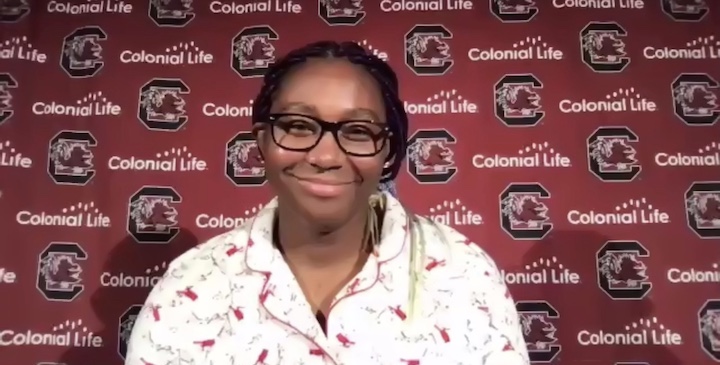 Sophomore forward Aliyah Boston is “really excited about the tournament” and what this team is capable of with hopes of bouncing back after a cancelled tournament in 2020. 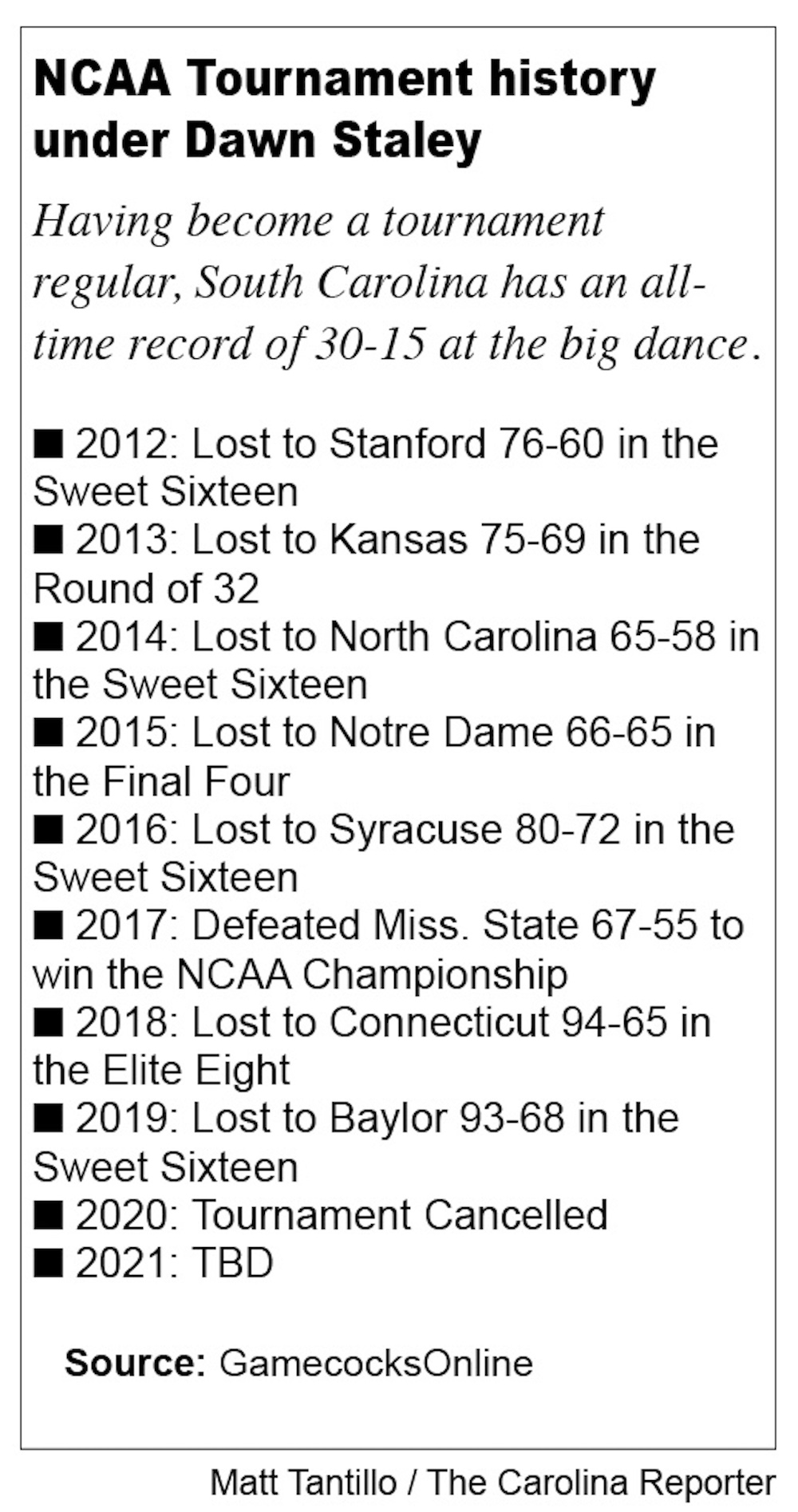