Students say university is “dragging its feet” over renaming buildings 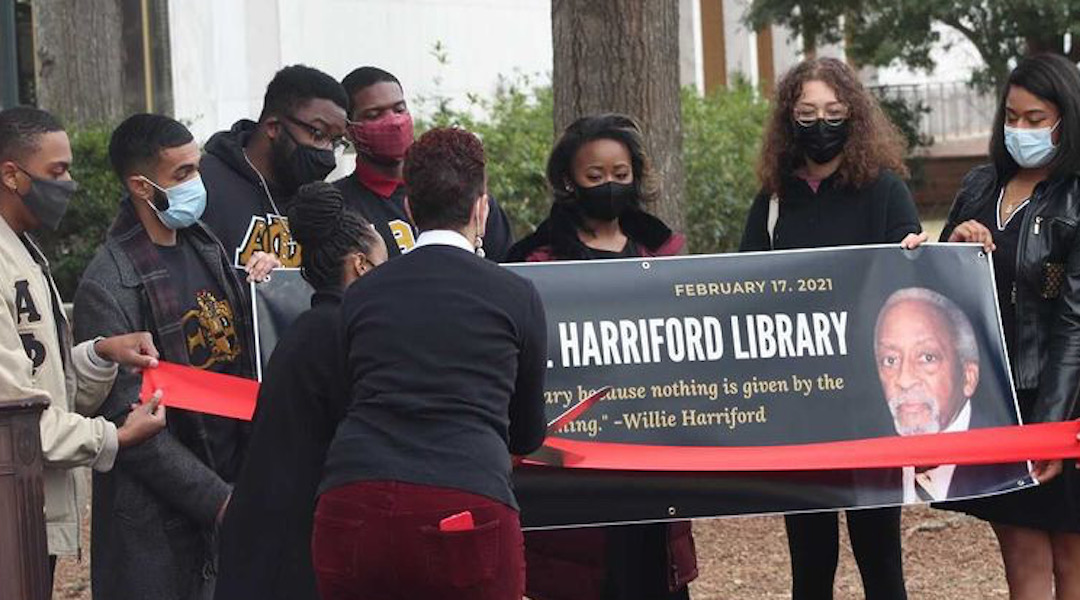 The newly reinstated student chapter of the NAACP is calling on the University of South Carolina to strip the names of racist South Carolina figures off key campus buildings, including the Thomas Cooper Library and the Strom Thurmond Fitness Center.

The organization’s “Aim to Rename” campaign included a mock ribbon-cutting ceremony Feb. 17 to honor the late Dean William L. Harriford Jr. The organization believes Harriford’s name should be on the library rather than Thomas Cooper, who served as the second president of the University of South Carolina.

Before immigrating to the U.S., Cooper was vocal about his opposition to the slave trade in Europe, publishing writings about the damage slavery had caused and the need for equality. Upon his arrival in South Carolina in 1794, Cooper purchased two slave families and went on to write about the necessity of the institution of slavery in the South.

Harriford Jr. was UofSC’s first black administrator, a prominent civil rights activist in South Carolina, a U.S. Army veteran, and the founder of the Alpha Phi Alpha chapter on UofSC’s campus. He died in November 2018.

“It is vital that the names of the buildings reflect the current state of our school and these names simply don’t,” said Dy’rek Hamilton, vice president of Alpha Phi Alpha. “Scholarship and education were [Harriford’s] top priority. There isn’t a name that comes to mind that I feel is more deserving.”

Caley Bright, NAACP chapter president, also spoke highly of Harriford and his legacy. “When speaking about Dean Harriford, there were no bad things to talk about in his past. It is honestly sad that he was not thought of before,” Bright said.

Bright said the club decided to plan the event after they “realized that this was an issue designed for the NAACP to take on.”

UofSC President Bob Caslen formed the Presidential Commission on University History in 2019 and tasked it with investigating existing building names. However, none of the buildings in question have been renamed, despite public scrutiny.

Much attention has centered on the fitness center named for Strom Thurmond, 103rd governor of South Carolina from 1947-1951 and South Carolina senator from 1954-2003. Thurmond was well-known for supporting racial segregation and conducted the longest speaking filibuster in opposition to the Civil Rights Act of 1957.

“I feel as if people like the Commission of University History are dragging their feet,” Bright said. “They have created a committee, and we see at least a little progress, which means a lot. Now we just want them to make a statement saying they hear us, and they are working on our side as well.”

The event drew a crowd of about 50, including student government officials, members of Greek life, faculty and students.

“It felt great being able to make some noise on campus,” Bright said. “Obviously, I know there are people that disagree with our movement, but I know the right side of history to be on, and that is all I am focused on.”

The Theta Nu chapter of Alpha Phi Alpha, a Divine Nine fraternity, partnered with the NAACP for the “Aim to Rename” event.

“I felt confident and proud to stand and defend our cause,” Hamilton said. “As I stated [in the speech], the goal is not for sympathy, but a demand for change.”

Hamilton echoed Bright’s disappointment in the university commission’s progress, saying it is sad the school has not made any changes.

“The decision to rename the buildings happened over eight months ago with no progress,” Hamilton said. “The discussion seems a bit symbolic to me, which is unacceptable.”

South Carolina’s Heritage Act is another hurdle in the renaming of campus buildings. The act requires a two-thirds vote in both the House and Senate in order to rename historical monuments, streets and buildings.

“It is frustrating to me that there is legislation stopping us from renaming these buildings,” Bright said.

She plans on working with legislators to get the needed votes.

“I want to sit down with legislators that can be on our side in the voting rooms,” Bright said. “While it does take being loud, it also takes a lot of behind the scenes work. I am ready to sit down with people that make these decisions to talk strategy.” 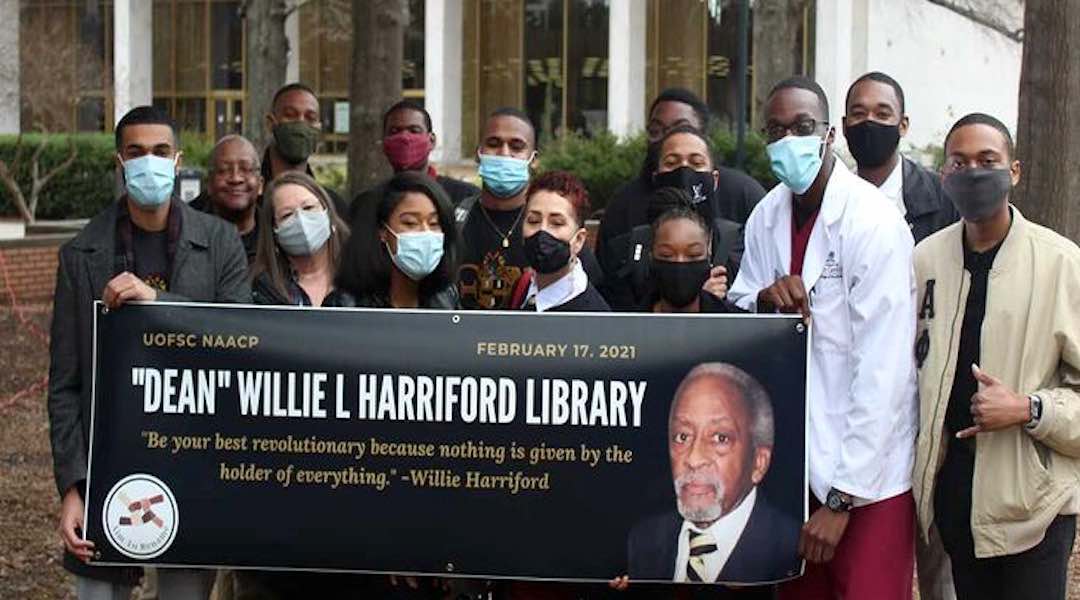 Organizers of the “Aim to Rename” event hold a poster of Dean William L. Harriford Jr. on the steps of the Thomas Cooper Library, which they would like to be renamed honoring Harriford. 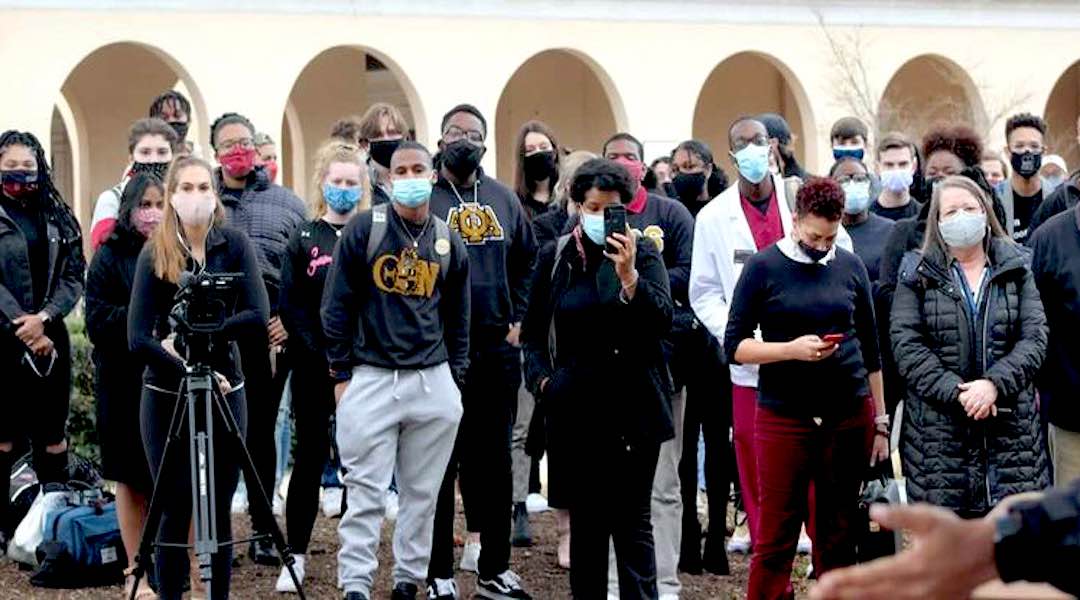 The crowd watched as students presented speeches at the event. 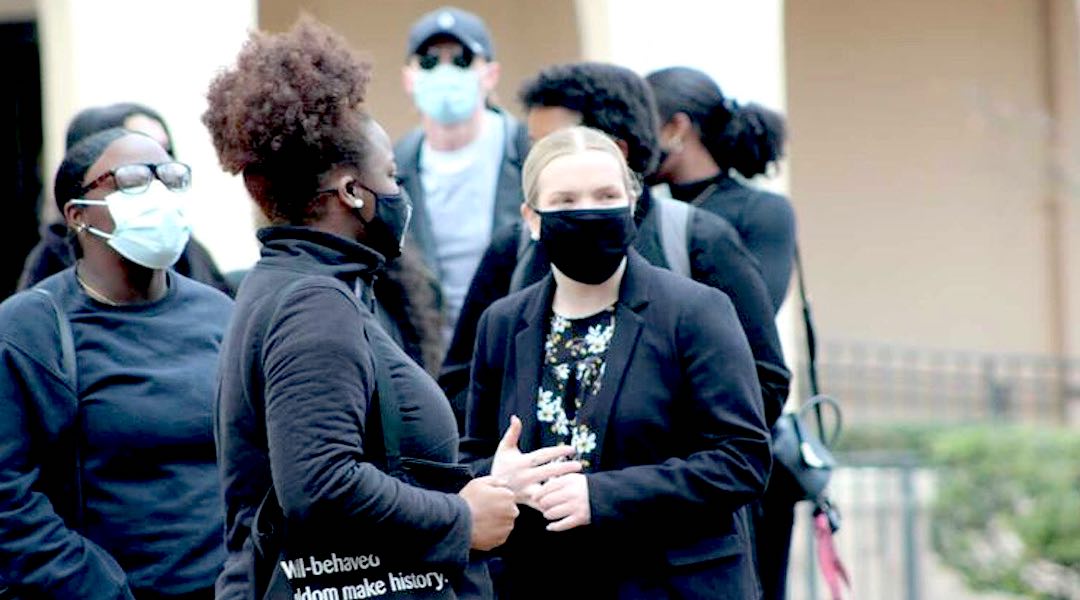 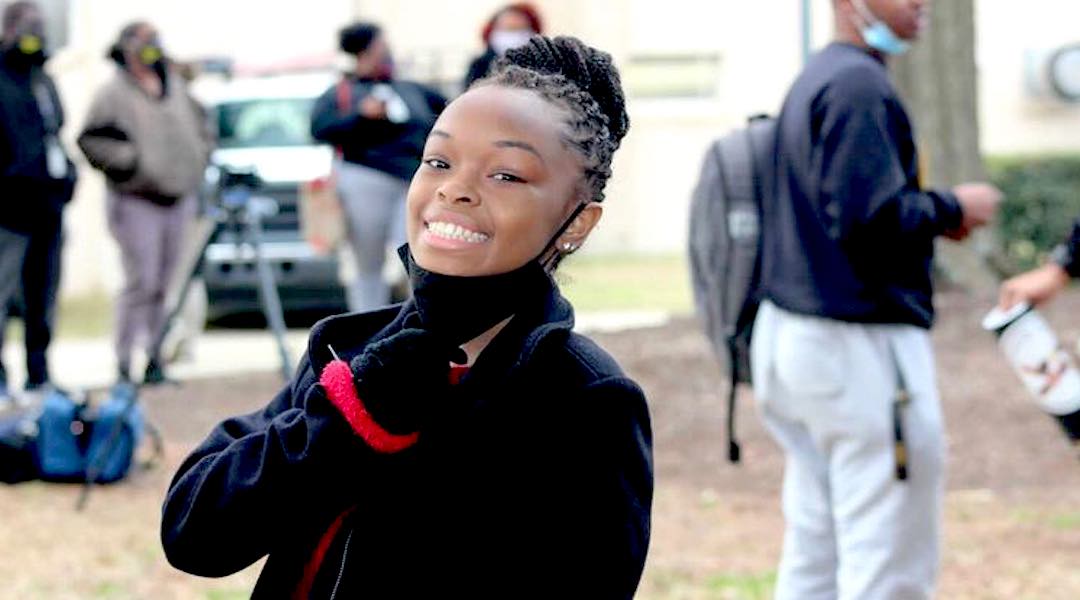 UofSC NAACP Chapter President, Caley Bright, spoke at the “Aim to Rename” event. Reylan Cook, secretary of inclusion and equity for student government, tasked Bright with reviving UofSC’s chapter of the NAACP at the end of the Fall 2020 semester.