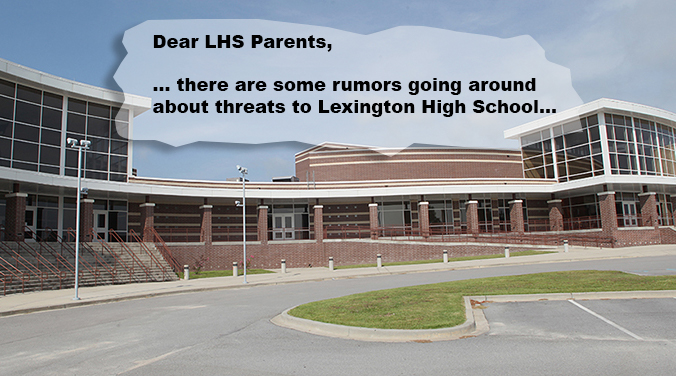 Police stepped up their presence at Lexington High School Tuesday after rumors circulated about an online incident involving at least one student, among other concerns. Classes proceeded normally and Principal Melissa Rawl urged parents to report unsubstantiated rumors to the district’s tip line.

Lexington High School increased security Tuesday in response to a series of incidents, including some on social media, that are now being investigated by the Lexington County Sheriff’s Department.

Melissa Rawl, principal at the Lexington One school, sent out multiple emails and a phone call to parents Tuesday that assured them that the additional police were there as a precaution.

According to the email, the school “experienced a surge in rumors circulating through social media and messaging apps about threats.”

The first incident occurred last week when one student sent a note to other students. After investigation by the Lexington County Sheriff’s Department, investigators determined no threat was made. Monday night, a different student posted on social media about his intentions to harm himself and others. Another student reported those comments to the district’s tip line.

According to the Lexington County Sheriff’s Department, authorities went to the student’s house, talked with his parents, and transported him by EMS for further examination after interviewing him. In her email, Rawl asks parents to refrain from passing along rumors and, instead, call the district’s tip line.

A number of Lexington County sheriff’s cars were seen on the campus, blocking one side of the entryway so only one lane could be used on Tuesday.   Parents were also seen signing their children out from school before lunch, and some were expressing concerns on social media.