“Rocket Fizz,” which opened its doors on Gervais Street in Columbia’s popular vista district, is an old-fashioned joint, priding itself on an arsenal of candies and soda flavors ranging from classic to bizarre.

The retro soda pop and candy store came to Columbia in August, and it boasts over 300 soda flavors.

“Rocket Fizz,” which opened its doors on Gervais Street in Columbia’s popular vista district, is an old-fashioned joint, priding itself on an arsenal countless candies and taffies and soda flavors ranging from classic to bizarre.

The retail chain has shops located all over the United States, but Columbia is now home to South Carolina’s only one.

Some of the soda flavors have a gourmet feel, like chocolate with strawberry or pumpkin pie. Others may be for the more adventurous, like mustard, or “barf,” which Jackson actually says is her favorite.

The sodas and candies line the shelves and coolers, while vintage tin signs and old concert posters—also for sale—cover the walls.

Ivan Brunson came into the store for his second time ever on Monday, and said the atmosphere evokes a feeling of nostalgia for him.

“It’s like the type of place my grandparents would take me to,” he said. “It feels like I’m back in the ‘90s.”

Jackson says the store is unique in that it can be enjoyed by people of any age—a child who has just tried orange crème soda for the first time, or an elderly resident who used to enjoy candy cigarettes.

To try sodas from chocolate to pickle juice, residents can check out “Rocket Fizz” seven days a week. 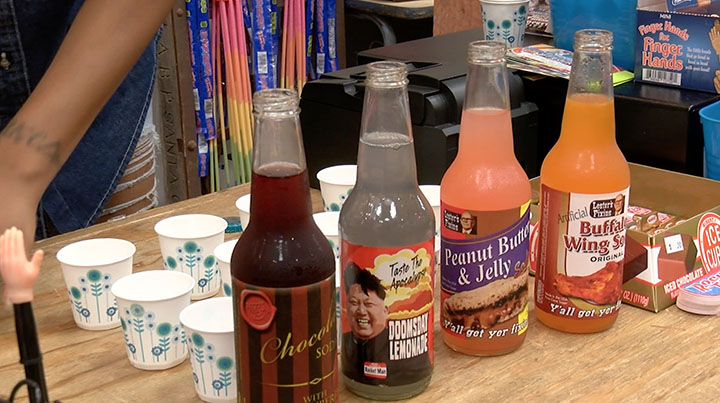 Soda flavors at “Rocket Fizz” soda and candy shop in Columbia can range from classic to bizarre, including “peanut butter and jelly” and the North Korea-inspired “doomsday lemonade.”