The quiet force behind the Gamecocks new rushing attack 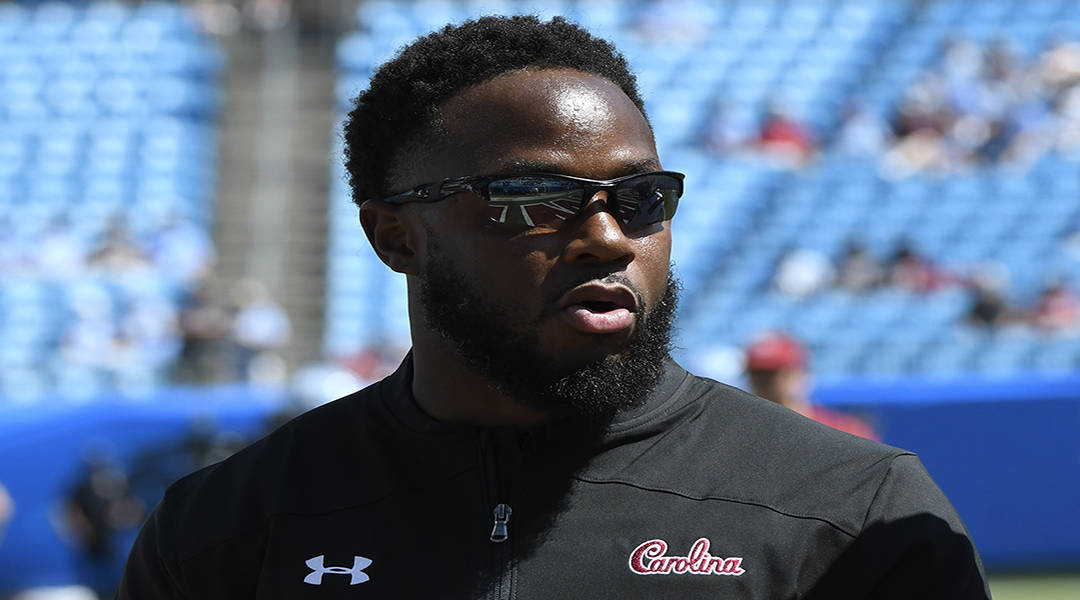 Thomas Brown was hired as the South Carolina running backs coach in Jan. and has the Gamecocks ranked second in the SEC in yards per carry. Credit: South Carolina Athletics

While some fans will point to improved offensive line play and experience at the running back position for the Gamecocks sudden success in running the ball, one reason may be a key off-season acquisition to Will Muschamp’s coaching staff – running backs coach Thomas Brown.

“You can put Thomas Brown’s resume up against any running backs coach in the country and I think it compares favorably,” said Tim Hill, radio host of 107.5 The Game’s “The All New Early Game.”

Brown was announced as the new running backs coach in January and joined the South Carolina program with an impressive resume. Most recently the offensive coordinator and running backs coach at the University of Miami, Brown started his college career when he committed to Georgia in 2003 as a running back himself. His first coaching gig was at Georgia in 2011 as an assistant strength and conditioning coach after a short stint in the NFL.

From there, Brown got a job as the running backs coach at UT Chattanooga in 2012 and Marshall in 2013. Brown’s big break came the following year when he joined the Wisconsin staff and coached Heisman runner-up and current NFL starting running back Melvin Gordon. Gordon and teammate Corey Clement, also in the NFL, combined to break the NCAA single-season record for rushing yards by teammates with 3,536 yards in 2014.

Following that season, Brown returned to his alma mater, becoming the running backs coach for the Georgia Bulldogs. There, Brown coached Sony Michel to a 1,000-yard season. Michel was later nabbed in the first round of the NFL draft by the New England Patriots. Brown then went on to Miami, where he produced two all-conference running backs in his three years there. Wherever Brown has coached in recent years, running back success has followed.

Thus far at South Carolina, that trend has continued. Running backs Rico Dowdle and Tavien Feaster have both had improved success this season. Feaster is averaging six yards a carry while Dowdle is right behind him at 5.9 yards a carry. The Gamecocks, as a team, have the fourth most rushing yards in the SEC, averaging 5.58 yards per carry. They are currently the only duo in the SEC that have more than 400 yards.

“He’s an outstanding young football coach, having been a coordinator at Miami, and is an outstanding recruiter,” said head coach Will Muschamp after Brown was announced to the coaching staff in January. “We are excited to have him as part of the Gamecock family.”

Brown also played a huge role in convincing Feaster to spend his final year of eligibility at South Carolina after winning two national championships with the rival Clemson Tigers. Brown made an immediate impact, getting a commitment from the current eighth best high school running back in the country, per 247Sports, in MarShawn Lloyd when no one expected him to look the Gamecock’s way.

In his first season as the running backs coach, Brown has all of his running backs producing at their highest levels. Because of this, the Gamecocks have established a new identity on offense, a run-heavy, ball control style of play that has proven to be effective through 7 games.

“It’s a results-based business and he’s got results at his position,” said Hill, who has followed and analyzed the Gamecocks for years. “Add to that the prized recruit in the upcoming recruiting class in MarShawn Lloyd coming down from some random place in Delaware, you’ve got to give him credit for that. Gamecock fans have a lot of complaints right now. Thomas Brown isn’t one of them.”

Brown has said his coaching style is based off two things, “being able to have a great energy and attitude every day.”

“I coach from my own personal experience and what I had success with, but also from what I’ve learned in the other places I’ve been. Every player is different, but they all get coached the same. We want to recruit guys that have the ability to make a guy miss one-on-one. I can’t tell a guy how to make (another) guy miss one-on-one.”

“Coach Brown, he’s hard on us,” senior running back Mon Denson said Tuesday. “He wants us to be a physical runner and just run angry, so that’s something we all try to do.”

Denson also points out the one thing that has stuck with him since Brown arrived on the coaching staff. 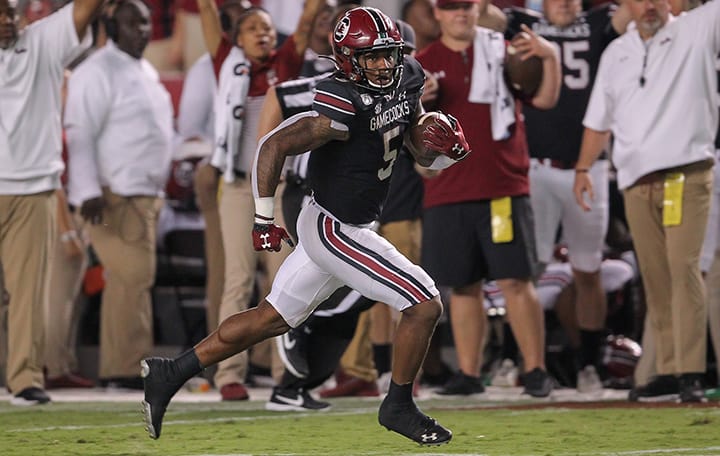 Senior running back Rico Dowdle has thrived under Brown as the new position coach. Dowdle has 457 yards on 78 carries this season and is on pace for his best statistical season as a Gamecock. Credit: South Carolina Athletics 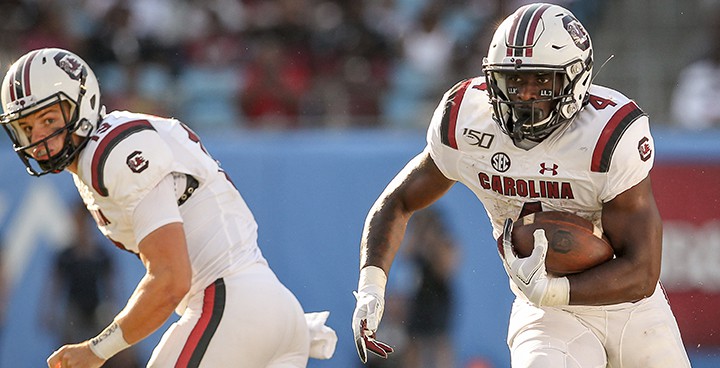 Clemson transfer Tavien Feaster (right) currently leads the Gamecocks in rushing and has more attempts (82) and rushing yards (492) through seven games this season than he did all of last year at Clemson. Credit: South Carolina Athletics 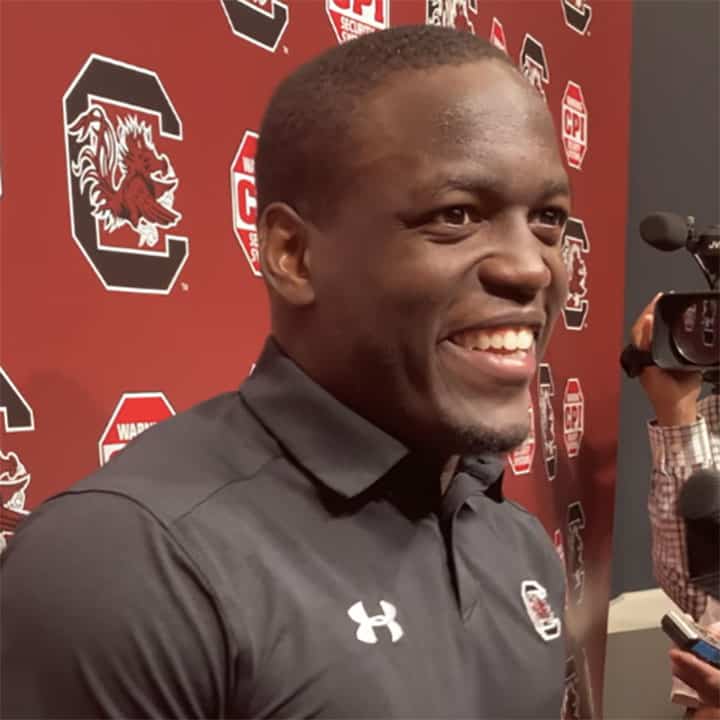 Senior Mon Denson has seen success even as the third string running back for the Gamecocks. Denson is currently at a career best seven yards a carry and has already matched his career high for touchdowns in a season with two. 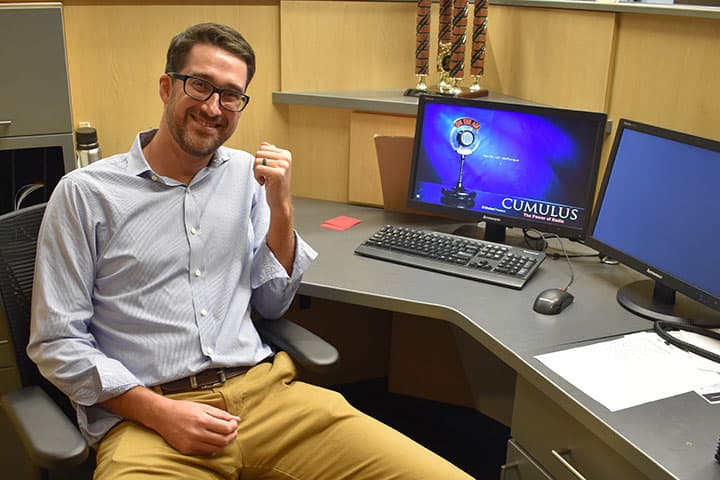 ‘The All New Early Game’ radio show host Tim Hill has followed Gamecocks football since the Lou Holtz years and believes Thomas Brown has been a great addition to the coaching staff.