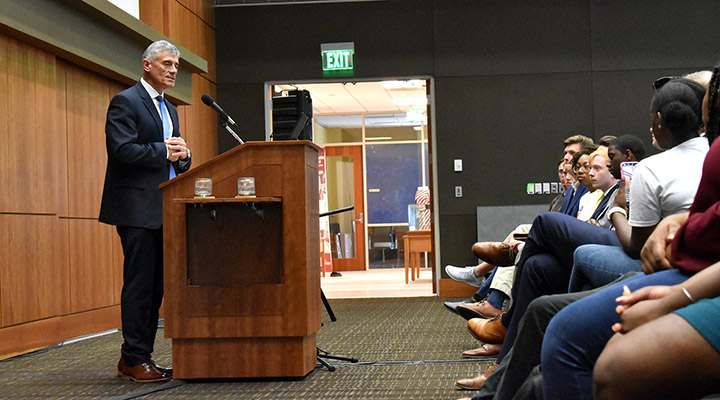 Robert L. Caslen Jr. spoke to students Wednesday morning about his experience, accomplishments and priorities as a leader in administration.

As the search for the next University of South Carolina president continues, the third candidate, General Robert L. Caslen Jr., spoke to the USC community Wednesday about his experience at West Point and his focus on developing character in young people.

Students were given the opportunity to listen to the presidential candidate speak about his background, experience and intentions should he become USC’s next president. Caslen was given a half hour to speak to students and students asked him questions at the end of the forum.

Caslen told students he was born in Connecticut as a third generation Italian and graduated from a Newport regional high school in Vermont. He received his bachelor of science degree at the U.S. Military Academy in West Point, N.Y.

“I decided that I would graduate, and I would go in the infantry in the Army for five years,” Caslen said.

While in the Army, he received two master’s degrees, an MBA in finance from Long Island University and a master of science degree in industrial engineering. His time spent working with students made him evaluate his career passions, he said.

“When I got to that particular point about getting out, I said, ‘I really like what I’m doing. My heart is actually drawn towards these young men and women and to be able to lead them and to work with them,'” Caslen said, so he continued his career in the U.S. Army.

Caslen retired from the Army in 2013. At the forum Caslen described his extensive military career, from being at the Pentagon in Washington D.C. during 9/11 to being senior commander in Iraq in 2011.

In 2013, Caslen said he was assigned as a superintendent at West Point’s Military Academy.

“When I got to West Point and got back with young men and women like yourself, who really wanted to be part of something bigger than themselves, and the opportunity to be with them inspired me,” Caslen said. “I never realized how much I was attracted to you and your generation and what you stand for and the fact that you are here making yourself better through continuing education.”

Caslen also spoke about his successes at West Point, including collaborating with a board of senators and representatives on funding the academy and strengthening academics.

Caslen wants to make diversity a top priority, along with sexual assault awareness and leadership. He cited binge drinking as a problem related to sexual assault.

“Excellence is performing to the upper level of your potential,” Caslen said.

Joseph T. Walsh Jr. and William F. Tate spoke at separate forums earlier this week and the fourth candidate, John S. Applegate, will be speaking at his forum on Thursday. USC students, faculty and staff are encouraged to attend the final forum and give feedback through a form. 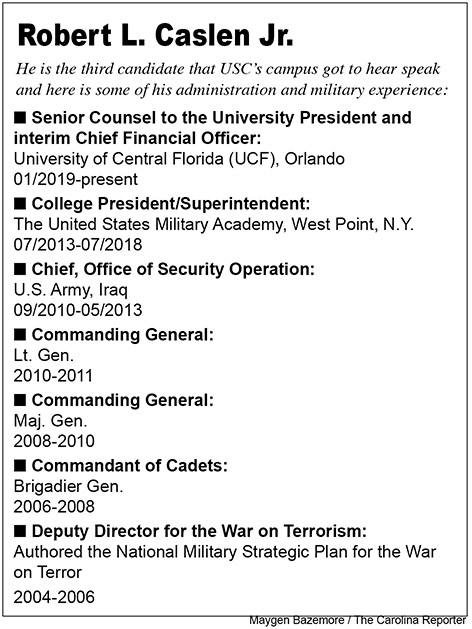