This is a moment: ‘Now you see them everywhere’ 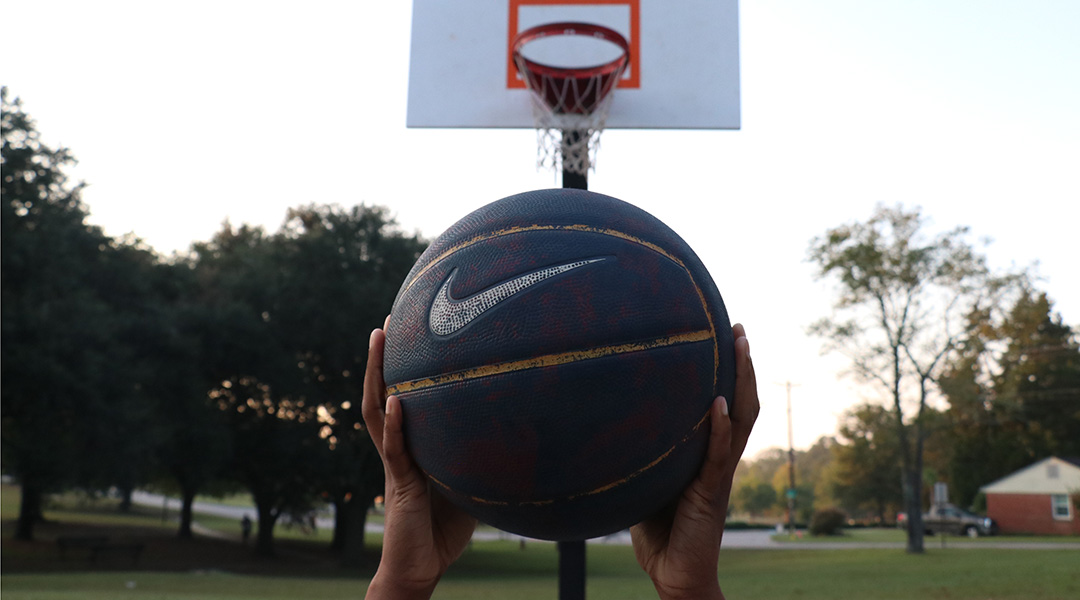 The WNBA and women’s collegiate basketball are clearing a path for American sports fans to embrace and support high-achieving female athletes.

This is a moment in sports. Female athletes are setting and breaking records in their fields. They are demanding to be compensated the same as male players. They are using their voices to fight against systemic racism.

Remembering George Floyd and Breonna Taylor is at the forefront of players’ minds. Sports Illustrated unveiled its daily online October issue highlighting powerful and influential women in sports—one of many covers for women.

“People realize it’s not much different than what you see from the guys,” Alyssa Lang, ESPN reporter and host, said. “It’s just as exciting – they just have ponytails or they have their hair in a braid.”

Blowing it out of the water

The University of Connecticut, Mississippi State, Notre Dame and the University of South Carolina are all powerhouses for women’s college basketball. In the past decade, these players have found their moment in American sports.

UConn has won 11 national championships under the leadership of head coach Geno Auriemma, who is arguably the greatest all-time coach. Auriemma is entering his 36th season with the Huskies. UConn routinely battles Mississippi State, Notre Dame and the University of South Carolina at the highest level of their seasons and college tournaments.

“South Carolina has blown it out of the water when it comes to attendance for the past four or five years,” Lang said.

Former South Carolina women’s basketball player A’ja Wilson earned the WNBA MVP after soaring with an average of 20.5 points and 8.5 rebounds per game for the Las Vegas Aces.

LeBron James, the first NBA player ever to lead three different teams to a national title, tweeted at Wilson when she won WNBA MVP. Men’s basketball players in the NBA wore orange hoodies to support the start of the WNBA season.

“This is going to be probably one of many MVPs for her,” Hannah Whitten, senior social media specialist at ESPN, said. “She’s one of those that is very well-respected among NBA players and athletes as a whole.”

Lang said the shift in the atmosphere in Colonial Life Arena was groundbreaking when Wilson, the nation’s top high school recruit, came to South Carolina in 2014.

“What Dawn and A’ja have done is incredible,” Lang said. “I still remember covering A’ja’s commitment when she was at Heathwood Hall and she decided to go to South Carolina. It was just this feeling of okay this is a superstar and she is about to bring a superstar mentality to South Carolina.”

Staley recently was featured in a Netflix series called The Playbook, highlighting her childhood, life as a player and now a coach.

The focus of this film and her career goes beyond a gender role. Staley has an active social media presence on both Twitter and Instagram. Whitten said her outspokenness on these outlets really helps her.

She’s not afraid to respond to people on Twitter and give her raw emotions. “Black People Are Tired” in The Players’ Tribune shows Staley’s first-person perspective on how “people are mad because nothing has changed.” The feedback from Staley’s fans and other people in the public, have mixed feelings about Staley’s outspokenness. But it doesn’t change Staley’s voice on these issues. 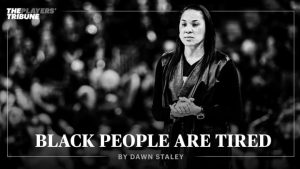 Influencing on and off the court

For college players who ascend to the professional level, gamedays in the WNBA are expanding beyond the game itself, using halftime as a way to honor black females who have lost their lives. The Black Lives Matter movement is a milestone for collegiate and WNBA players.

“I think that they are setting the tone in a sense of like players will know that once they get to college and to the WNBA, their voices are going to be heard,” Whitten said.

“I think players who are super active on social media are influencers already — that has helped coverage overall,” Whitten said.

Players like Sue Bird of the WNBA Seattle Storm, with her wife, U.S. women’s professional soccer player Megan Rapinoe, have attracted huge social media followings partially attacking President Trump on Twitter and generally lambasting the sports world for lack of equal pay. Rapinoe filed for women’s equal pay with her team and supports the Black Lives Matter movement, kneeling during the national anthem with Colin Kaepernick. Natasha Cloud, who plays for Washington Mystics, decided to sit out this season because of the nation’s focus on systemic racism.

Cloud said in an Instagram post, “This has been one of the toughest decisions of my career… I will instead, continue the fight on the front lines for social reform, because until black lives matter, all lives can’t matter.”

Converse, the apparel and shoe company, has a partnership with Cloud and covered her salary this season. Cloud is the first women’s basketball player to sign a shoe deal with Converse. Converse also made a $25,000 donation to a racial justice organization in Philadelphia.

“She’s a great role model all around,” Whitten said. “I always put her in the same category as Sue Bird and Megan Rapinoe. All of that stuff is going to come first and basketball just takes a back seat.”

“You can do this”

The WNBA and other women’s sports haven’t always been the darlings of ESPN.

Andraya Carter, who went on to play for Tennessee and is now an analyst for SEC women’s basketball, searched as a young girl to find female athletic role models to follow. She sought out professional women players like Tamika Catchings, Maya Moore and Christi Thomas.

Carter said she had to watch the stream of the Tennessee women’s basketball game on their athletics website. Now, fans have access to channels like SEC Network and ESPN to watch female sports. The WNBA’s 2020 season streamed 10 live games on Twitter accessible to the public for free.

But Carter said there is a battle still to be fought for women.

The Vols women’s basketball program was highly respected, but Carter said the men’s games at the arena were consistently packed.

“So for us it still kind of felt like ‘gah, you know, in order for people to support us we have to win,’” Carter said. 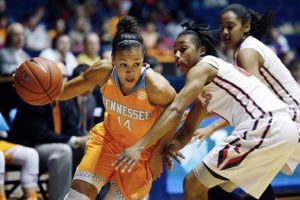 Carter posted this image on Instagram in 2018 after getting the opportunity to report with SEC Network on the Final Four. Photo credit: Andraya Carter

She missed the opportunity to play for Tennesse basketball legend Pat Summit, who has the most basketball wins in history as a coach. Summit is a name that continues to make a path for women in sports.

“For Pat, just not afraid to grit her teeth and stare you down and scream and be frustrated, but excited—I think that for a long time it wasn’t normal for women to be like that,” Carter said.

Summit began her career driving the team and washing their uniforms. Carter said her fire and passion are inspirational for anyone, but especially for women.

Carter read Summit’s books as a young female as she craved inspiration from women. The evolution of accessibility for women has made the inspiration for women in sports more effortless.

Carter said the pressure for women to stay in the kitchen has been broken. And now women have even broken into sports.

The females working in sports like Carter are decreasing the gap. Carter said her life as an analyst now is much easier than the women that came before her at ESPN like Maria Taylor and LaChina Robinson.

“Some of the women that had to really work to get their foot in the door to get opportunities, now you see them everywhere, Carter said. “That makes it easier for me because people see them so when they see me trying to do this, it’s not like ‘wait you’re trying to be in sports?’ It’s like ‘oh yeah, there are a lot of women in sports. Yeah you can do this.'”

The rise for recruits and future players

Women’s college and professional basketball players want to seize the moment for young players who come behind them.

“The more eyes get on these games and get to know the players, and really pay attention to the sport, the more that snowball continues to grow,” Lang said.

The WNBA is creating its own emphasis on empowering females and speaking on political movements. These women are not afraid. These women want to be known as fearless in the public eye. 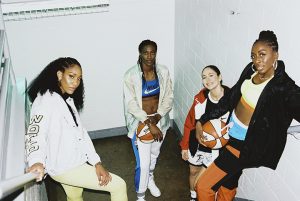 “The WNBA is a great example especially for college teams, NFL, NBA, MLB for just how a league should back its players,” Whitten said.

The female athletes are slowly bridging the gaps culturally, ethnically and racially… Women will not stop this fight and it is evident in the game.