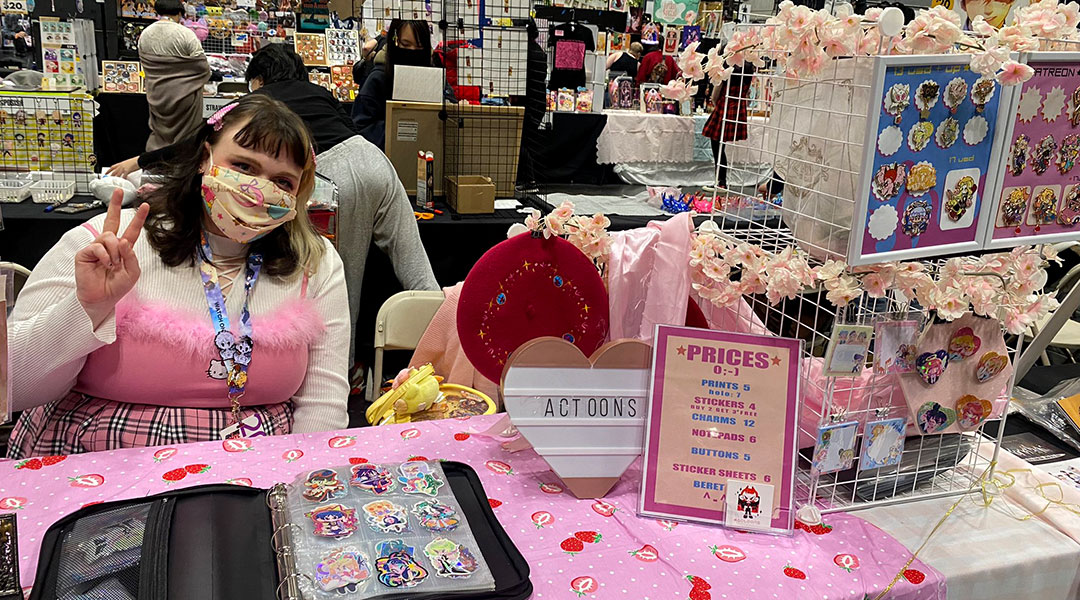 It was a cold, windy weekend as lines of bundled up con-goers wrapped around the outside of the towering Javits Convention Center eagerly awaiting the opening of Anime NYC.

The hundreds who lined the building wore costumes ranging from casual to elaborate, some sporting giant bird wings or tucked inside big mascot suits. The halls were often filled with upbeat music as some brought portable speakers with them to play their favorite anime songs.

Artists from South Carolina were represented last weekend at Anime NYC, one of the largest anime conventions in the country with about 53,000 in attendance this year.

“I love meeting like, the diversity of people as well. You know, I’m usually used to like, the small, close-knit community from South [Carolina], North Carolina. And here… I’m rooming with someone from California,” Broach said.

Although COVID-19 forced Broach to take a hiatus from selling art in person, they’re eager to be back now. Most comic and anime conventions across the country have Artist Alley, which is a section of the exhibition hall where artists set up shop.

Artists usually have to go through an application process and pay a table fee, and at large cons such as Anime NYC, it can be very competitive. In Anime NYC’s massive Artist Alley, patrons were lined shoulder-to-shoulder or crowded around certain booths to try to scope out colorful prints, charms, enamel pins and other merchandise of their favorite characters.

Broach has attended about 20 cons while doing Artist Alley, and it’s become a way to stay inspired to keep creating.

“It’s really lovely when people respond to my stuff online or buy from my shop online. But it’s better when you see who it’s going to. And when they’re like, ‘Oh, I love this.’ It’s like it really touches you,” Broach said. “It really encourages you and like, gives you motivation to keep doing what you’re doing and to improve.”

Another artist, Wen Zhang, is a 21-year-old illustration student at the School of Visual Arts in New York City. He also greatly values the social aspect of Artist Alley.

Zhang lived in Greenville his whole life before he moved to New York City to attend art school. Although he still enjoys going back home, the bustling city life inspires him. This is his second time tabling at Anime NYC, and he’s glad to be back. His vibrant art style fluctuates from round and simple for lighthearted pieces, to more detailed and hard-edged for more serious ones.

“It’s always great because this is a great time of year. Lots of people, lots of great artists. It’s nice to like, be around other people who are doing the same thing,” Zhang said.

Artist Alley is not for the faint of heart; it requires artists to work long hours, sometimes preventing some artists from being able to eat. Anime NYC’s Artist Alley was open from 11 a.m. to 7 p.m. Friday, 10 a.m. to 7 p.m. Saturday and 10 a.m. to 5 p.m. Sunday. With so many attendees this year, it was hard for artists to take breaks from helping customers. Despite this, it’s all worth it to Broach.

“You have to be kind of crazy to do this,” Broach said. “I wouldn’t discourage anyone from getting into it by any means, because it’s really rewarding, but like, definitely think about it.” 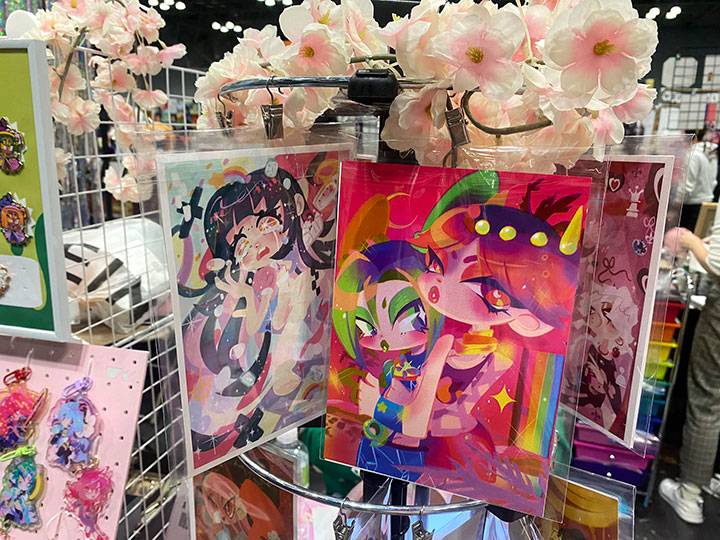 Broach has a spinning display of prints of popular anime and video game characters. This was their first year attending Anime NYC, and they said it surpassed all their expectations. 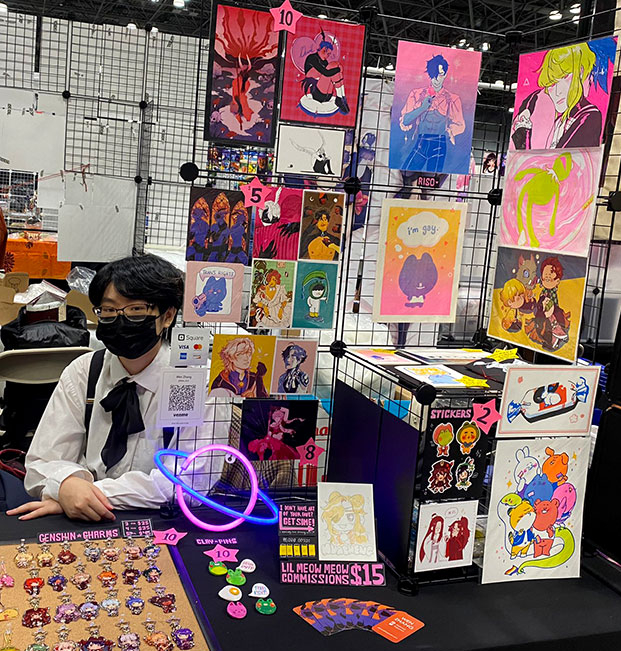 Wen Zhang, a 21-year-old from Greenville, sells prints, stickers, clay pins and charms. It’s his second year returning to the event as an artist. 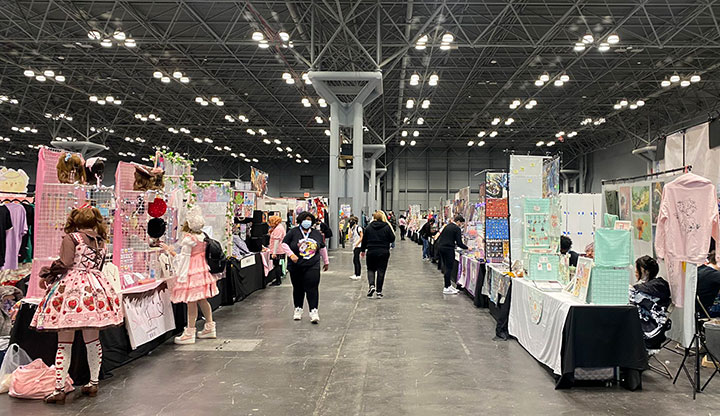 Convention artists prepare their booths during the calm before the con floor opens to regular attendees. With an estimated 53,000 attendees this year, the Artist Alley was jam-packed. 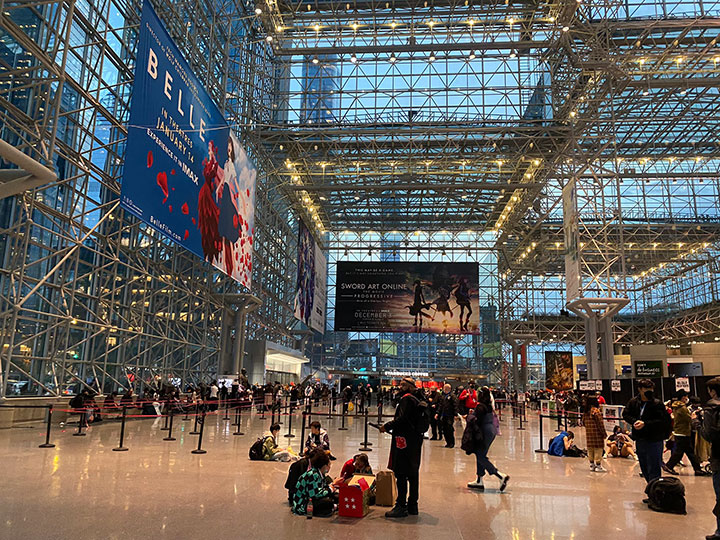 Even with 850,000 square feet of exhibition space and four floors, the Javits Convention Center was packed to the brim with attendees eager to return after the con took a break in 2020 due to COVID-19.