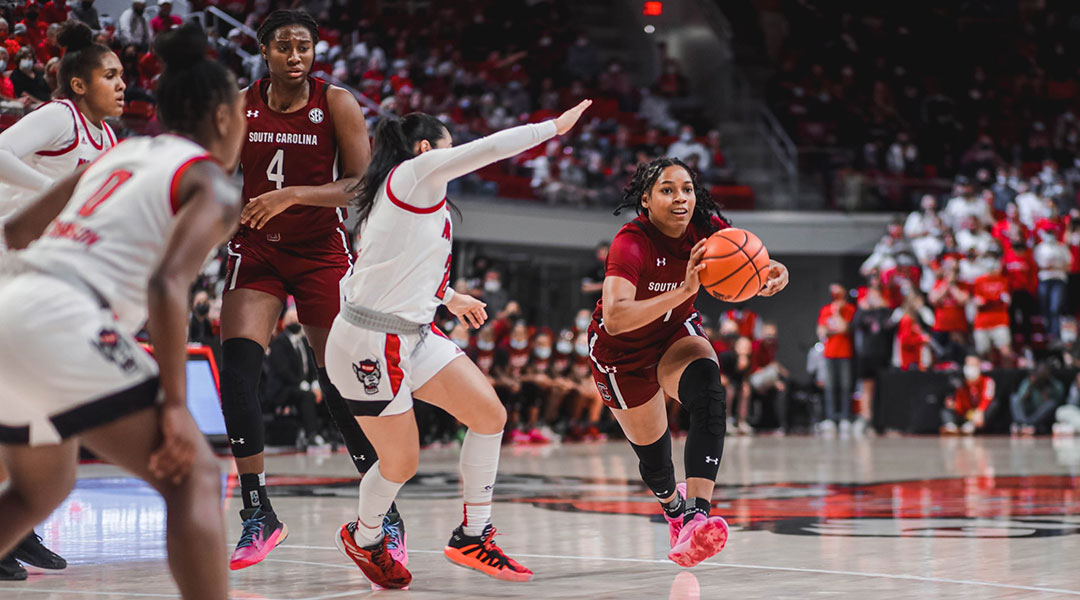 The top-ranked Gamecock women’s basketball team opened up their season with a road test, traveling to face the fifth-ranked NC State Wolfpack. The Gamecocks defended their first overall preseason ranking by defeating the Wolfpack 66-57.

The Gamecocks started out quickly, beginning the game with a 6-0 scoring run. Rebounding was the story early on, as the Gamecocks dominated this aspect of the game early. The first half ended with the Gamecocks out rebounding the Wolfpack 19-9.

The dominance on the boards helped the Gamecocks gained control early; however turnovers hurt the Gamecocks in the second quarter allowing NC State to stick around.

NC State brought it within one point midway through the third quarter, however the Gamecocks took back control led by junior guard Zia Cooke. She made multiple shots during that stretch, including a three to put the Gamecocks up by 10 early in the fourth quarter.

This was the largest lead of the game at the time and essentially put away the Wolfpack.

The win avenges their most recent matchup, when they fell 54-46 at the beginning of the 2020 season.

In an interview before the game, Staley said the top-five matchup “forces you to get right quickly.” After the game, she reinforced this statement. She said the matchup helps the team to “measure ourselves,”  which is a valuable opportunity this early in the season.

The Gamecocks scoring production came primarily from the backcourt. Cooke led the team with 17 points, followed by senior point guard Destanni Henderson who had 14.

Staley said after the game “offense has to continue to progress and grow.” While they did enough to get the win, the team did struggle with turnovers and three point shooting.

“We just got out of sync,” Staley said, of their first half turnover issues. However, they tightened up in the second half, only turning the ball over twice.

Junior center Aliyah Boston had an overall quiet day offensively, scoring 8 points while shooting 3-8. She made her presence felt both rebounding and defensively and led the team with six rebounds and five blocks.

She also was tasked with a difficult matchup, having to guard NC State’s senior center Ellissa Cunane. Cunane, along with Boston, enters the year as one of the nation’s top players.

She averaged 16 points and 8 rebounds last season, however the Gamecocks held her to 8 points and 4 rebounds in the contest. Center Kamilla Cardoso also played a significant role in shutting down their star center.

Staley said after the game, “We wanted her to work as hard as she could,” and her centers delivered. They successfully limited Cunane’s impact overall and kept her from getting any offensive rebounds.

Next up for the Gamecocks is another away matchup this Friday against South Dakota.

The home opener for the Gamecocks is set for Wednesday, Nov. 17 as the rival Clemson Tigers visit Colonial Life Arena. Tipoff of the home opener is scheduled for 7:00 P.M. 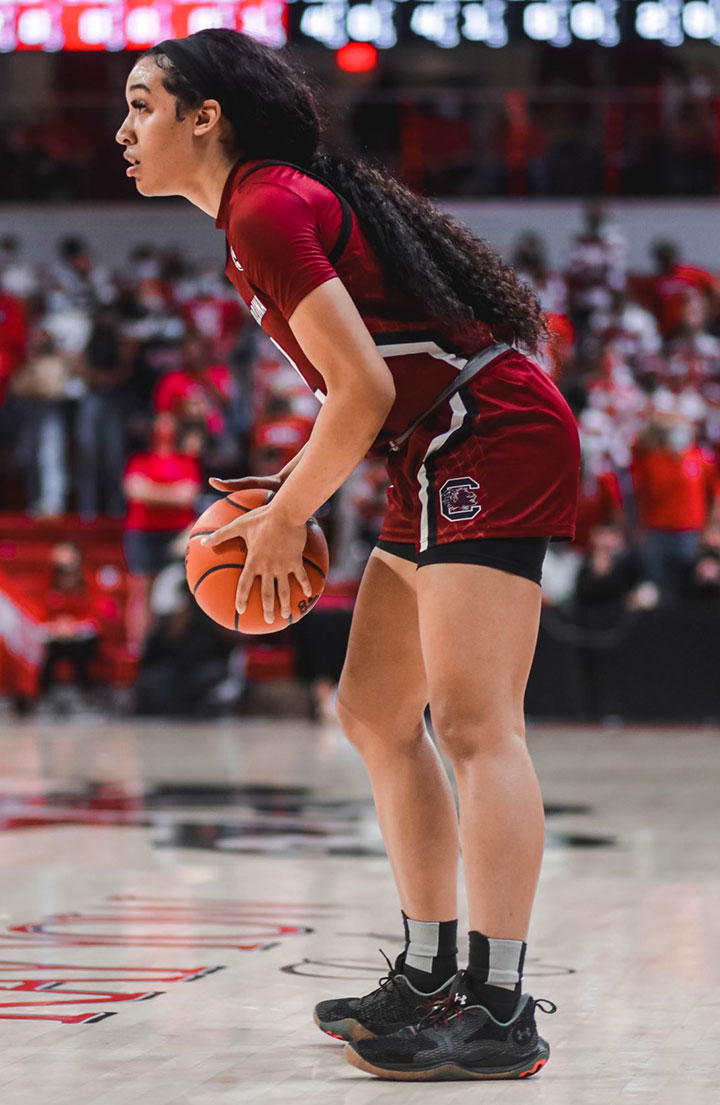 Junior guard Brea Beal impacted the game in a variety of ways. She shot the ball efficiently, scoring 7 points at a 60 percent clip, and recorded 2 blocks and a steal defensively. 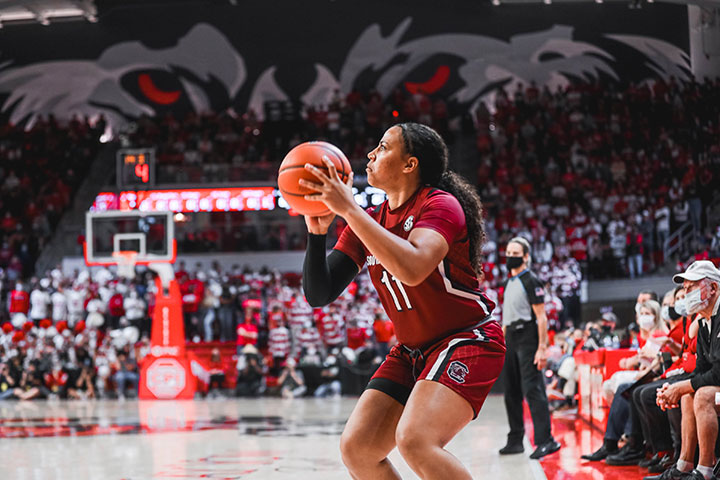 Senior guard Destiny Littleton made one of five three pointers during the game, finishing with 7 points and 4 rebounds. 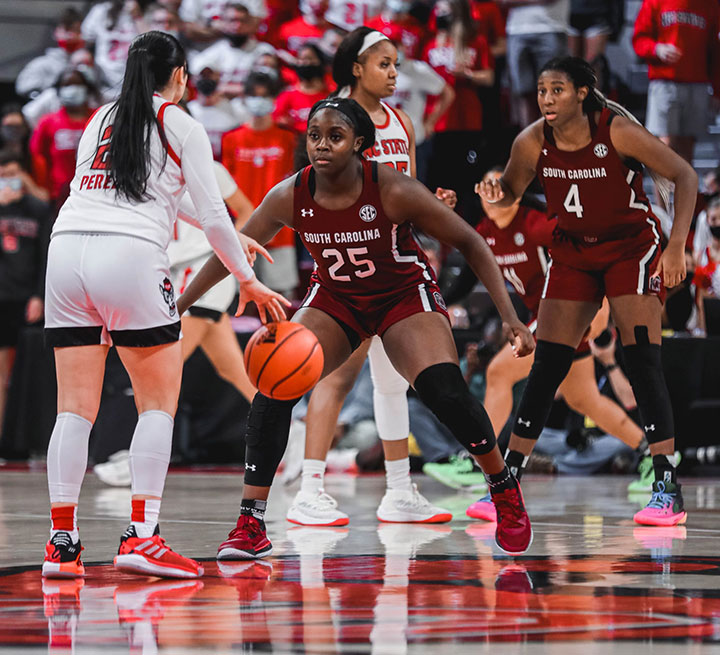 Freshman guard Raven Johnson (25) saw her first action as a Gamecock, logging 8 minutes on the court. She and fellow freshman guard Bree Hall were the only two freshman to play against NC State, as Staley relied heavily on her veterans. 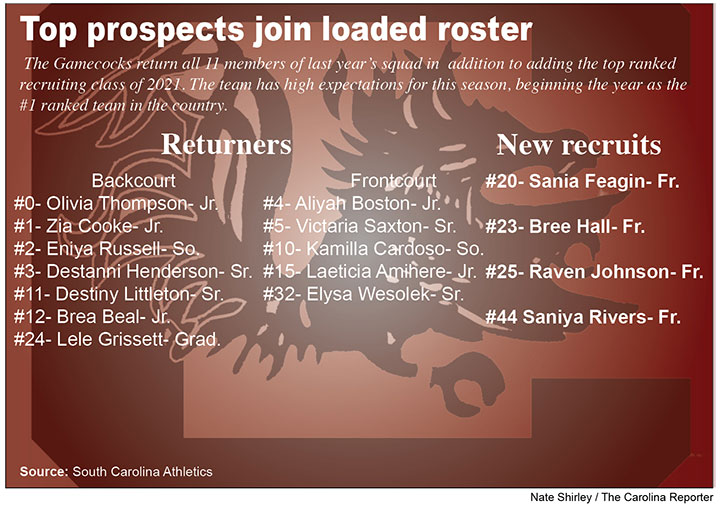 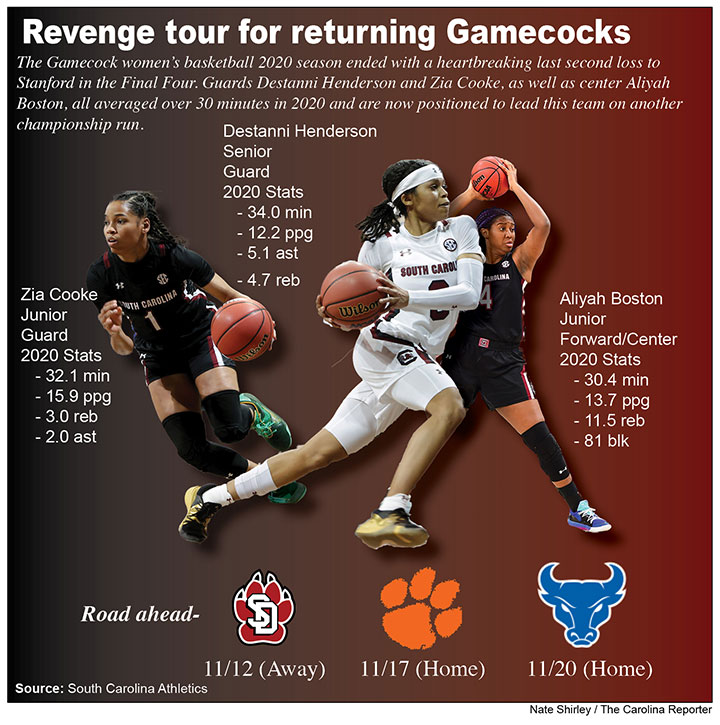