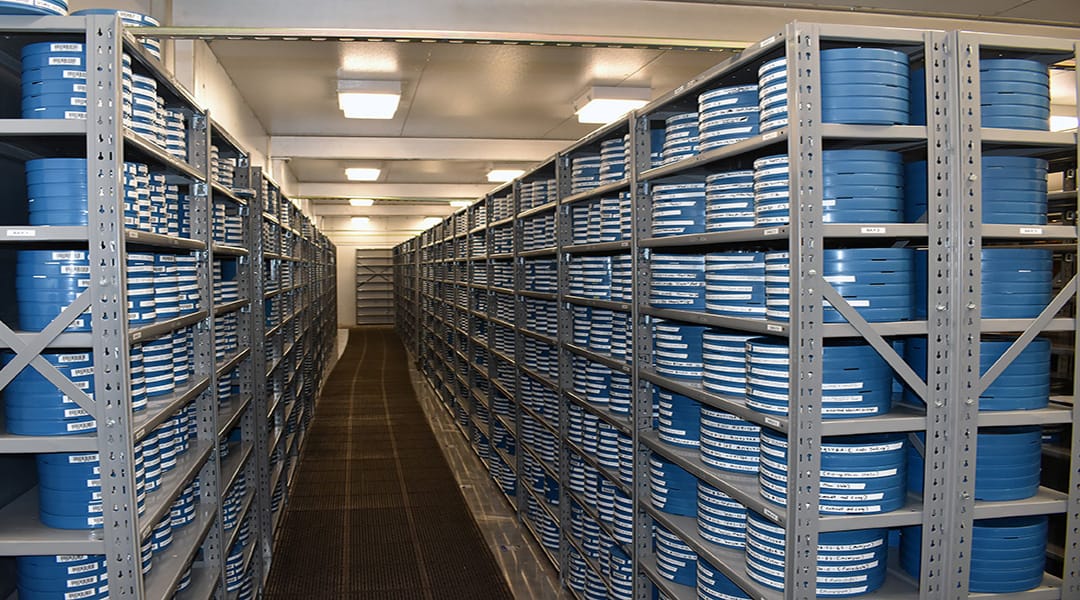 The University of South Carolina Libraries is unveiling more than 80 reels of Marine Corps film shot from the 36-day battle on Iwo Jima, one of the most famous World War II battles. These films have been digitized as the country marks Wednesday’s 75-year anniversary of the beginning of the battle.

“Societies go through great transitions where they have to allow big seismic events to slip permanently and irretrievably into the past,” said Greg Wilsbacher, the curator of newsfilm and military collections at UofSC’s Moving Image Research Collection, “where first person accounts are no longer possible and the memories of anyone that lived through it are gone. We’re at that stage at a global level for World War II.”

The United States Navy and Marine Corps landed on Iwo Jima on Feb. 19, 1945 and eventually captured the island off the coast of Japan from the Imperial Japanese Army. While most Americans recognize the iconic image of the flag being raised on Iwo Jima, Wilsbacher said the digitization process revealed images that had never been seen before.

The films are part of a larger collection of reels shot by Marines between World War II and the 1970s, which are stored in the university’s U.S. Marine Corps Film Repository.

The MIRC stores Marine films, given to them by officials at the Marine base at Quantico, Virginia, in a temperature-controlled vault.

“We actually built this vault especially for the Marine Corps collection because when we knew we were taking the collection in, which is about 18,000 cans of film, obviously we didn’t have room in our old vault,” said Lydia Pappas, interim director of the MIRC.

The process to preserve and digitize these films is time intensive, but UofSC has the resources to power through the grueling process.

“We have student interns who come every semester to work on these films. They have contributed hundreds of hours to this project and that’s a big part of the story is the work that USC students are doing to help us move forward on this,” Wilsbacher said.

Time is crucial in the digitization process because the film won’t last forever.

“Film’s kind of like people; eventually it’s going to go away. It’s a lot of temperature control stuff, checking the film every once in a while. A lot of the film, you can tell if it’s going because it gets a really strong vinegar smell,” said Tanner Klessens, a senior media arts major at UofSC and an intern at MRIC.

Making these films from Iwo Jima accessible connects people from the past to their modern-day counterparts.

“It is important for us to look carefully at this documentation to see the Marines as individuals a lot like us, Americans, a lot like us,” Wilsbacher said. That includes black Marines who may have been overlooked in photo histories of Iwo Jima.

“The Montford Point Marines were black Marines, segregated units, trained in Montford Point, North Carolina. We have a surprising quantity of footage of African American Marines on Iwo Jima taking part in the battle. I think that is some of the most important material that is in some of this footage,” Wilsbacher said.

“A lot of this material is straight out of the camera, this is exactly what was shot,” Pappas said. “If you watch any of the Marine Corps footage, it is stunning. Some of it is beautiful color, but at the same time you’re seeing all kinds of carnage. It is the raw stuff.” 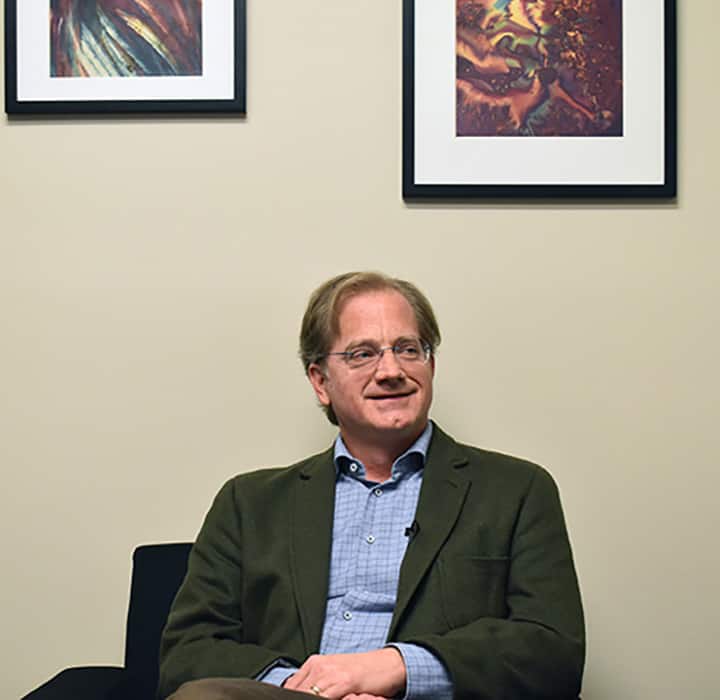 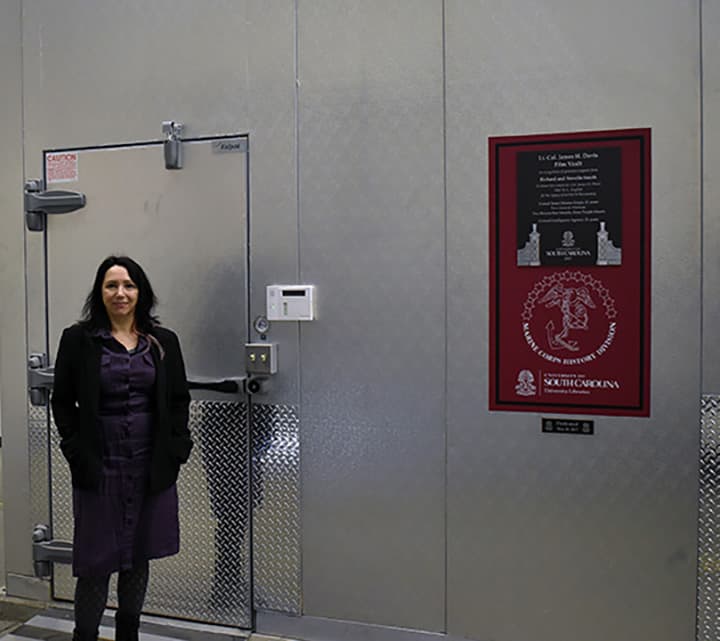 Lydia Pappas, interim director of the MIRC, stands in front of the temperature-controlled vault containing many old film reels. 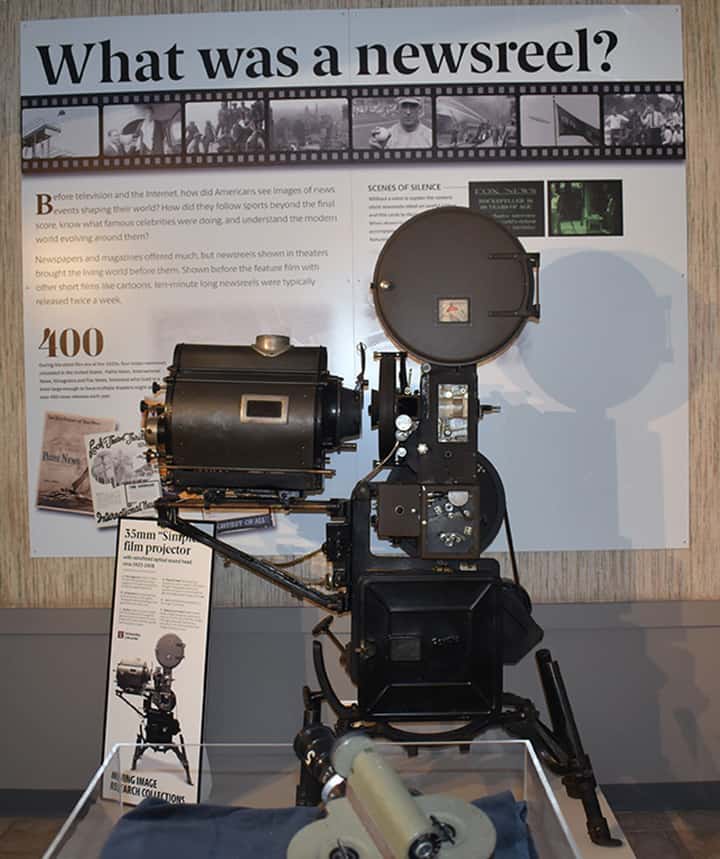 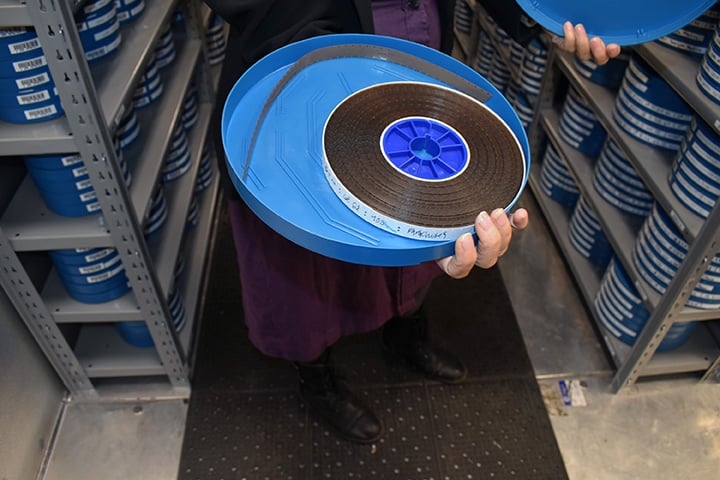 An old newsreel from the Marine Corps collection at the MIRC contains thousands of still images that will eventually be digitized into one video.