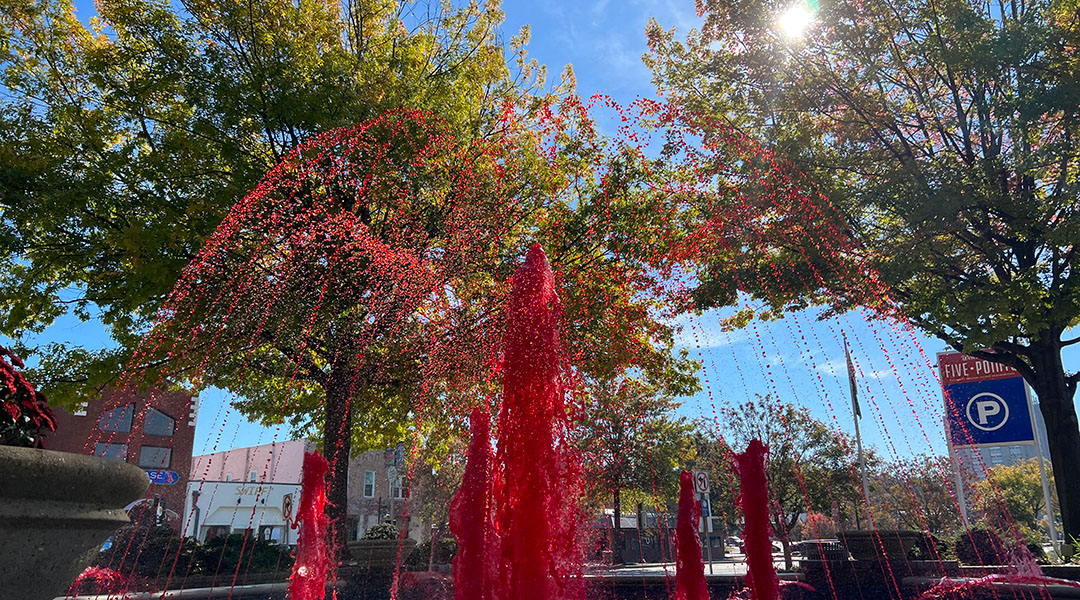 A homecoming block party, Paint the Town Garnet & Black, is coming to Five Points on Friday, Oct. 28, at the large fountain.

Gamecock Athletics, the Five Points Association and the University of South Carolina held a press conference Monday to announce the outdoor party that will be held from 5 p.m. to 10 p.m. at Harden Street and Saluda Avenue.

“This might be the best scene I’ve seen all day,” Mayor Daniel Rickenmann said. “We got Cocky here, we got (the) garnet-colored fountain in Five Points — two of my favorite things.”

The atmosphere in Columbia is still buzzing with energy and excitement coming off the Gamecocks’ major 30-24 win against Texas A&M on Saturday. USC made No. 25 in the Associated Press’ Top 25 College Football Poll — a list they haven’t made since 2018.

Paint the Town Garnet & Black is open to all members of the Gamecock family. It will be free to the public and feature the band The Root Doctors. People also will be able to enjoy games and merchant sidewalk sales, according to Gamecocks Online.

“Five Points is about our young people of the city of Columbia,” said Ray Tanner, USC athletics director. “But we also have an opportunity for our alumni, our adults — even the visitors if they want to come down — and enjoy a little Friday night with us.”

The Gamecocks’ recent win has created a sense of electricity throughout USC and Columbia.

Rickenmann is particularly excited about Saturday’s game against the University of Missouri. The game involves the Mayor’s Cup, a trophy that travels between Columbia, Missouri, and Columbia, South Carolina, depending on who wins when they play.

“We plan to bring that cup back home,” Rickenmann told the crowd.

The game starts at 4 p.m. in Williams Brice Stadium.

“The Mayor’s Cup is on the line,” Tanner said. “And Mayor Rickenmann’s going to get a hold of that, I got a good feeling, on Saturday night.”

“The purpose of homecoming is to bring people together to celebrate the university we all love,” said Juliana Tyndall, a USC senior who is the school’s homecoming commission president. “I cannot think of a better way to do that than to host a pep rally meets block party.”

Most businesses in Five Points will operate as normal, according to Gamecocks Online. Tanner said Friday’s party will extend the excitement from last week’s game into this week.

“For many years, my kids have told me ‘You can’t go to Five Points,’” Tanner said. “Well, now I have permission to be here. We’re having a block party.” 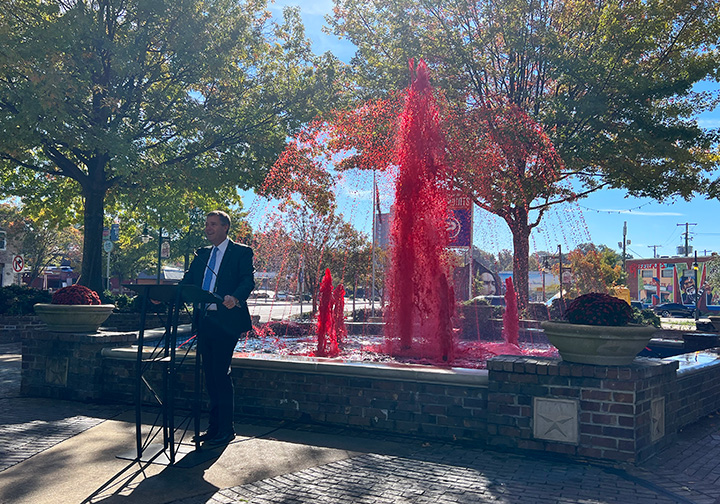 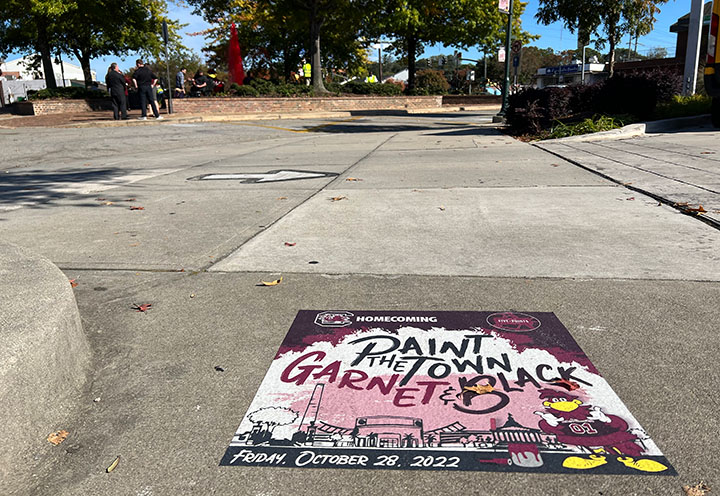 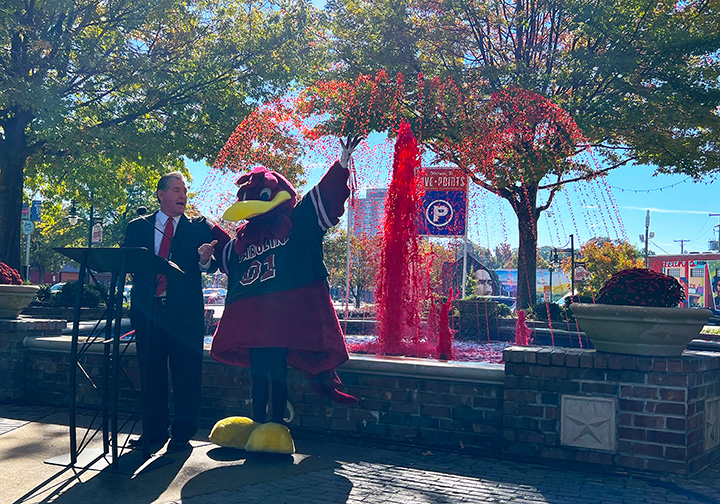 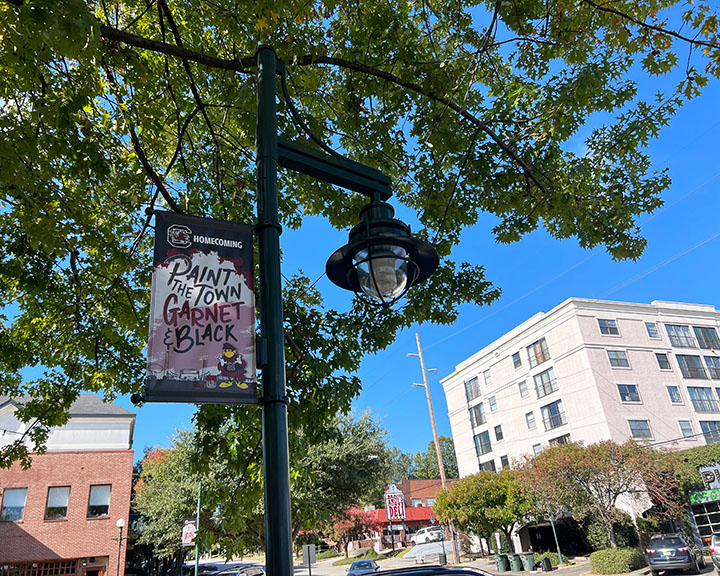 Paint the Town Garnet & Black will be at the corner of Harden Street and Saluda Avenue. 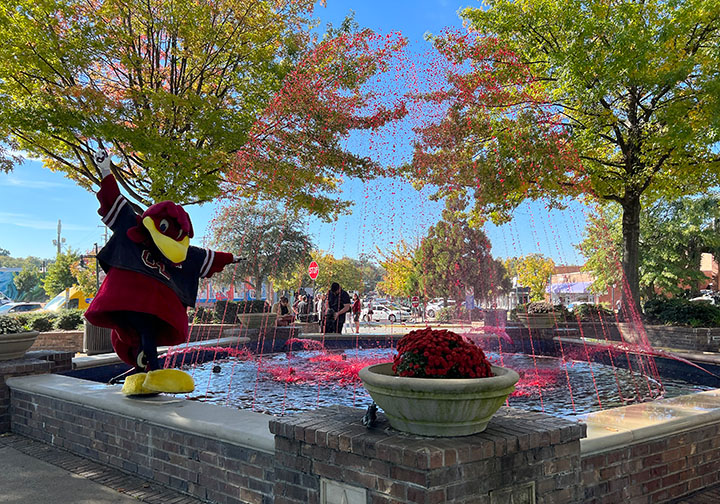 USC mascot Cocky waddles across the edge of the fountain while waving to passersby.