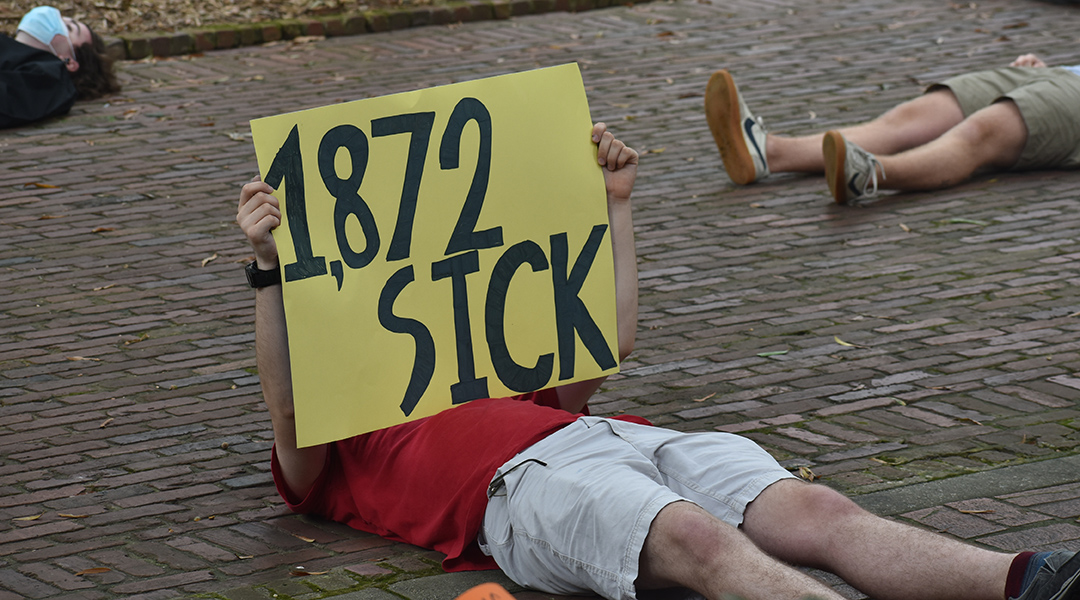 A student takes part in the protest’s die-in in front of the President’s House on the horseshoe.

About 15 students gathered Wednesday near the center of the University of South Carolina’s historic Horseshoe to protest President Robert Caslen and the university’s handling of the coronavirus.

The protest was orchestrated by the Carolina Socialists, a campus organization that posted twice on Twitter the night before, detailing the plan for the protest.

It was a crowd small in numbers, but large in demands. The demands, as listed in their Twitter post, include: moving all classes to fully online, increasing testing to original capacity and having an option to move off-campus with a full housing refund.

According to the university’s COVID-19 dashboard, 42% of undergraduate classes are fully online, while testing was recently reduced from four hours to two, suspended for three days and only the first 200 students to show up are allowed to test using the saliva test.

Jeff Stensland, the university’s director of public relations, said, “It should be noted that the university has administered more than 15,000 COVID-19 tests to our students, faculty and staff since Aug. 1, and we continue to do more than 500 per day – even at a reduced testing capacity.”

The protest began with the students forming a large circle. Each person shared his or her thoughts on President Caslen’s handling of the pandemic on campus. They posed questions such as, “Do we not care about those with underlying conditions?” and “What about the community?”

Many of the students hoisted signs directed toward President Caslen: “1,872 SICK,” “how many caskets?” and “it’s all Bob’s fault,” were among the signs.

For five minutes, the protestors laid across the bricks of the Horseshoe, keeping their signs draped across their chests.

After the five minutes concluded, the protestors began a short march toward the Osborne Administrative Building, where they believed President Caslen to be. Along the way, they chanted, “What do we want? More testing. When do we want it? Now.”

The protest lasted about an hour and after it concluded, Carolina Socialists president Jake Sawyer reiterated his club’s demands from the university.

“The USC COVID policy is atrocious and it is just a matter of time before some students start dying, and that means that there’s blood on the hands of the administration, because they have actively worked to keep the university open despite uncontrollable rising cases over the past few weeks,” Sawyer said.

Stensland says that students have the option to attend classes virtually if they choose.

“We continue to focus and work tirelessly on our top priority – the health and safety of our students, faculty and staff – as we provide the best educational and research experience for our students,” he said. 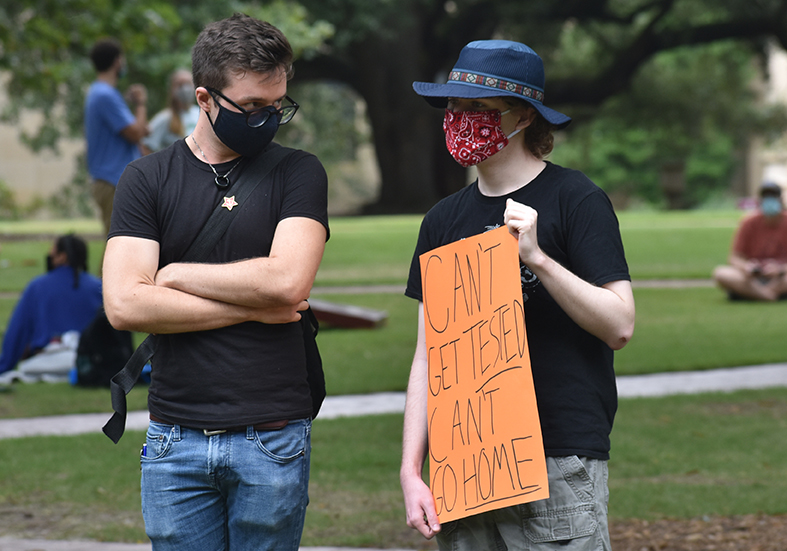 Two protestors talk amongst themselves. One protestor holds a sign that reads, “Can’t get tested, can’t go home.” 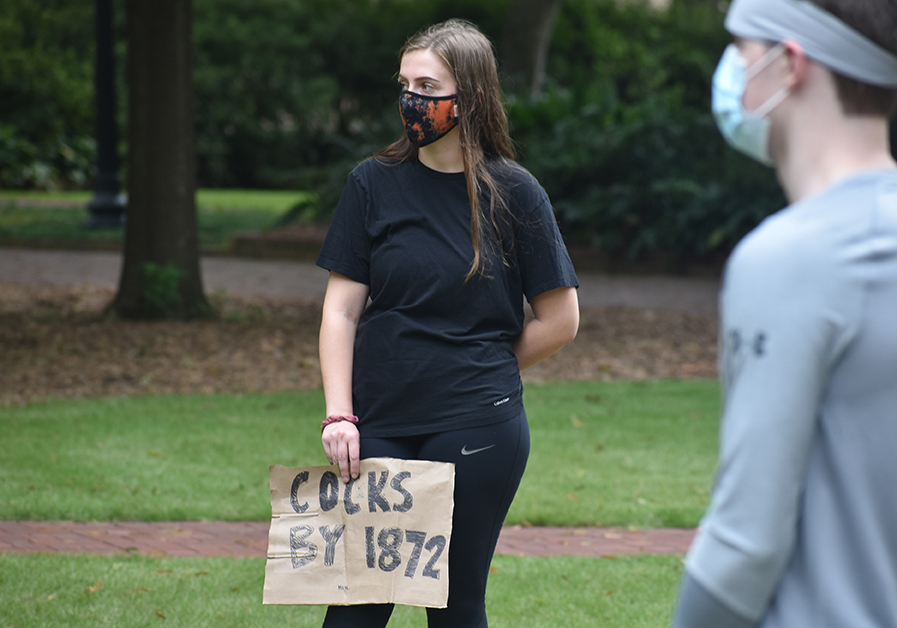 One protestor holds a sign that reads, “Cocks by 1,872,” in reference to a popular phrase said by students in regards to sports, “Cocks by 90.” 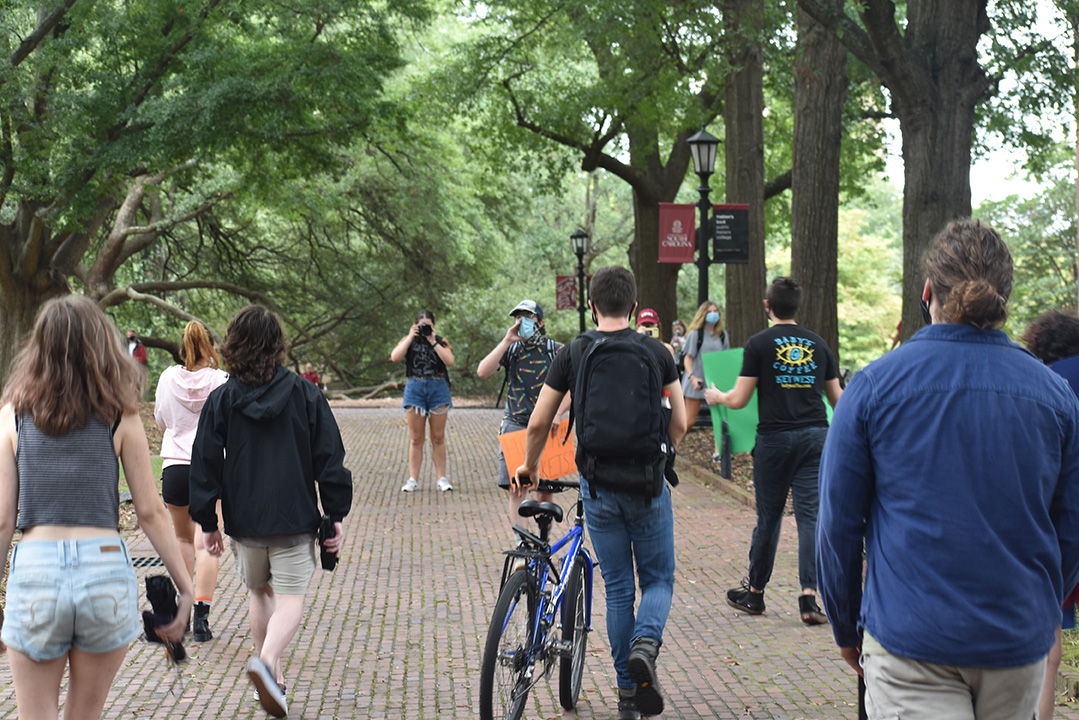 Protestors march across the horseshoe chanting, “What do we want? More testing. When do we want it? Now.” 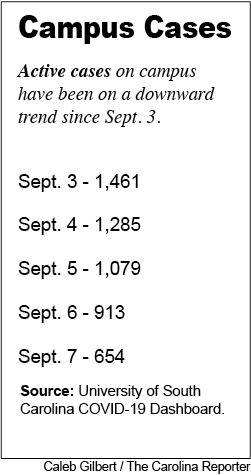