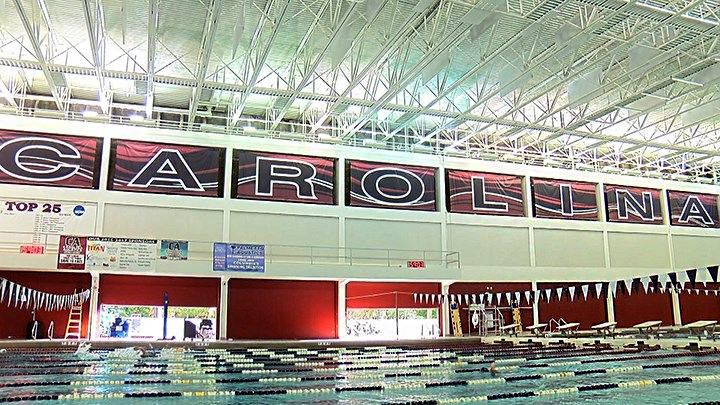 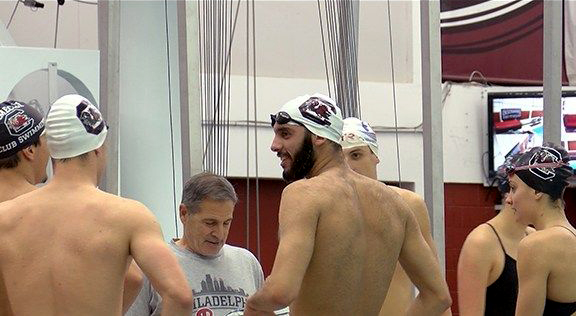 Distance swimmer Akram Mahmoud who is a rising star talks with USC teammates during a practice. 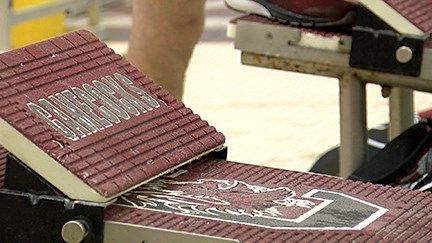 South Carolina has earned a reputation as a top distance swimming program.

Out of all the obstacles distance swimmer Akram Mahmoud had to overcome when he traveled 6,000 miles to the University of South Carolina, from his home in Cairo, Egypt, culture shock was not one of them.

“I felt like it’s home here, and I was really blessed,” Mahmoud said.

Mahmoud, one of the world’s top performing distance swimmers, and head coach McGee Moody attributed Mahmoud’s ease of transition to his international teammates.

“Having other people on our team that have made that adjustment, that have walked through that process, it definitely has a big impact,” Moody said.

Mahmoud, who began swimming at age 5 and winning international competitions by 15, knew that he wanted to go to swim at a U.S. college. in the United States. The University of South Carolina’s reputation as a top program for distance swimming and international athletes helped him make the decision to head to Columbia.

“We’ve kind of become known worldwide as a program that can develop international students and then provide them the opportunity to go back and compete for their country,” Head Coach McGee Moody said. But there were athletic and academic hurdles to overcome.

He did not join the team until January of his freshman year, which meant he was forced to adapt to a team that had been training for months with one of the most volume-based programs in the nation. Mahmoud also had to adjust to from the long course yards used internationally to the short course yards used only in American swimming.

“It was a little bit hard for me because I have to do a lot of turns since I’m a distance swimmer so it took a long time to make my turns better and adjust for the short course yards,” Mahmoud said.

Many people also doubted the student-athlete’s ability to perform well outside the pool.

Mahmoud has earned All-American honors eight times. He has also proved skeptics of his academic performance wrong by getting his name on the list of multiple honor rolls.

Moody believes that Mahmoud is one of the top distance swimmers in the world, but he finds the mindset that inspires this success nearly as impressive.

“He has a huge heart and loves his teammates,” Moody said. “And at the same time, what’s awesome about Akram is he is one of the most fierce competitors that I’ve ever met.”

During last year’s NCAA tournament, Mahmoud was one of four swimmers who broke the American 1650 freestyle record.

“It was an epic race that to this day has never been repeated and probably won’t be for a long time, you walk over to Akram and in that moment the first thing he said to me was ‘I’m sorry coach,’” Moody said. “And I’m sitting there thinking ‘Akram, there’s only two people on the face of this planet that have swam faster than you in the 1650.’ I was like ‘What are you sorry for?’ and he was like ‘Yeah,’ but he goes ‘Those two people swam faster than me in this heat.’”

Mahmoud does not feel satisfied with what he has accomplished so far. Before his time as a Gamecock is over, he hopes to become the only swimmer at the university to win an NCAA title.

Another “first” also motivates Mahmoud. He wants to become the first Egyptian to medal in swimming. The pressure to do well for his family, country and coaches played a large role in Mahmoud’s performance in Rio. Mahmoud qualified for the Rio Olympics in 2016, but did not reach the finals. He did, however, meet his hero Michael Phelps.

“That was something I will never forget for the rest of my life,” Mahmoud said.

Over the last year and a half, Mahmoud has worked to become more confident and more experienced before Tokyo. Following graduation this spring, Mahmoud plans to stay in Columbia to train for the Olympic Games in 2020. He also plans to pursue sponsors. .