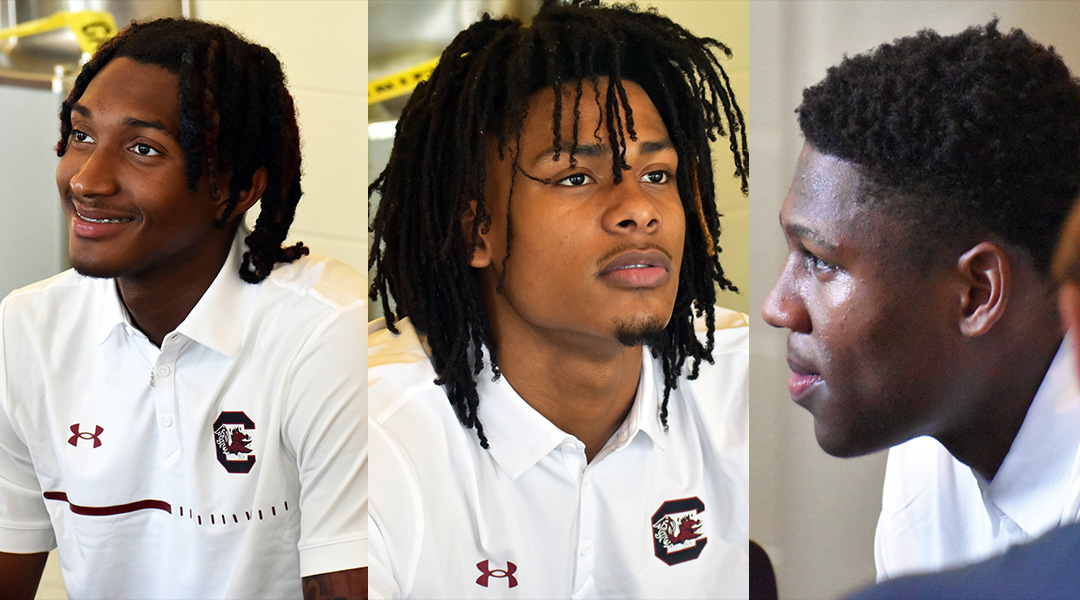 South Carolina men’s basketball team entered its first season with Lamont Paris as head coach with a hodgepodge roster made up of transfers, holdovers and a few star freshmen.

The comparison to the famous comedy group doesn’t extend past the fact that there are three of them and they spend time together. But the freshmen have formed a bond that has helped them adjust to college basketball.

“Me, Zach and Daniel, we’re always around each other,” Jackson said. “I basically live in their room. I’m never in my room. I’m always falling asleep on the couch. Those guys — I feel like I’m probably going to be the closest with them on the team.”

The three first met at a high school basketball camp held at USC.

“So after that day, all of us met and we came together,” Davis said. “After that we talked, we exchanged numbers. Since we’ve been here, all of us have been with each other every day, working out, going to get food, riding, talking to girls — doing all that type of stuff.”

“We stick together,” Hankins-Sanford said. “We hang out every day, whether it’s going to (the) Dodie (Anderson Academic Enrichment Center) to do study hall. We’re together. We move in a trio, whether we’re going to get some food from the Russell House, anything. You name it, we are moving together.”

And now that the season has started, the three plan to test their chemistry on the court.  Here is a deeper look at the “Stooges.”

Yerrick Stoneman remembers the first time he ever spoke with Jackson.

At the time, Stoneman was head coach for the varsity men’s basketball team at Ridge View High School, and Jackson was an eighth-grader sitting in the stands behind the team bench.

During the first play of the game, Stoneman called for an alley-oop to be thrown to Ja’Von Benson, a Ridge View alum and now a junior with the Gamecocks.

Flash forward to 2022, and you’ll find Jackson has stayed true to his giggly self. Stoneman commended him for his “unbelievable personality” and the way he is able to connect with others.

“A unique ability about him is he’s able to touch many people’s lives,” Stoneman said. “Within our school we had about 1,500 kids, but he was able to relate with every one of those kids. It wasn’t like he was in one certain clique. He was friends with everybody within the school.”

That larger-than-life personality transferred to USC.

Though he’s enjoying being — at 6-foot-9 — a literal and figurative big man on campus, he said campus stardom isn’t distracting.

“I don’t really get stopped as much, as far as people wanting to have conversations with me,” Jackson said. “But as I’m walking, I’ll hear my name, and I’ll give them a wave and stuff like that. … I’m all for it. If you want something, like an autograph or whatever, I got you.”

On the court, the five-star athlete is still adjusting. Jackson has only one game under his belt, but he put up a double-double in the matchup with S.C. State University.

He hasn’t had an in-game, welcome-to-college moment yet, but he said during a pre-season practice he had the next best thing.

“The first time I tried to go up and grab a rebound, I came down and I had it over my head looking for an outlet,” Jackson said. “Benjamin (Bosmans-Verdonk), he came behind me, snatched it from me and went up and laid it up. I fell on the ground, and when Ja’Von (Benson) helped me up, he was like, ‘Dang. … Welcome to college basketball.’”

He was almost welcomed to college basketball at the University of North Carolina.

The Columbia native had the attention of college coaches during his freshman year of high school. At 6-foot-6, he was one of the taller players on the team and was able to play in the post and the perimeter, Stoneman said.

During the recruiting process, Stoneman said he became close with Jackson and his father, talking upwards of four times a week.

“I think as a coach, you should never tell a kid where he should go — it should always be his decision,” Stoneman said. “But throughout the process, for every school that he brought up, I give positives and negatives, and he would have to weigh each one and make his decision.”

Jackson committed to the Tar Heels in April but decommitted three months later  – becoming the first recruit in the modern era to decommit from UNC. Shortly after, he reclassified from the 2023 class to the 2022 class and enrolled at USC.

Paris said he knew the potential Jackson had coming in but has been surprised with certain facets of his game.

“For a guy that has all the acclaim and accolades and attention that he’s had, he’s an extremely willing passer,” Paris said. “… He didn’t come in here the first day saying ‘I’m GG Jackson. I gotta shoot 27 times.’”

Zachary Davis’ college adjustment had less to do with hype and headlines, and more to do with food.

Davis joked that the coaching staff said they “just want me to eat,” caring more about his caloric intake than his assists or points. Davis came to USC thin, standing 6-foot, 8-inches tall but weighing just 175 pounds.

Hercules Davis, Zachary’s father and high school coach, said eating shouldn’t be a problem for Davis. His dad joked he would have no problem “killing” food from restaurants like Zaxby’s, IHOP or Olive Garden.

If the amount of food has been an easy adjust, time in the weight room has been more difficult.

“I really wasn’t lifting weights before practice, and lifting weights every day like how we are here,” Zachary Davis said, referring to high school. “Just that your body is sore — just gotta keep working hard — but that was really the biggest adjustment because nobody really wants to lift every day and practice every day. But it’s something you gotta do.”

“Zach’s shown the most improvement possibly of anyone on the team from the day that we got here,” Paris said. “Physically, he’s got a long ways to go. But he’s improved that way. But even his basketball game, it’s coming along, so I’m really excited to see what he’s gonna look like in late January.”

Under his father’s tutelage at Denmark-Olar High School, about an hour from Columbia, Davis became a three-star prospect and the fourth-highest rated recruit in the Palmetto State, according to 247Sports.com, a key recruiting data outlet.

“Because I’m a much taller guard. I can create space, get to the bucket. I can dump it off,” Zachary Davis said. “If it’s a small guard on me, I can either post up or make reads off the post up. I just feel like if I get bigger I can defend all four positions.”

South Carolina has been Davis’ dream school from the jump, according to his father.

“I took him to a game here one night, him and his classmate, and we watched them play,” Hercules Davis said. “On our way back home, he said, ‘Dad, this is where I want to go.’ So I said, ‘OK, so you got to make it happen. Got to stay in school, work on your game, be humble.’ And that’s what he did.”

Daniel Hankins-Sanford had similar feelings when he visited Columbia, or at least his brother did.

“Right then and there, I knew if they gave him an offer, if they give him a chance, he was going to take it,” said Shy Sanford.

The two brothers still text every day — or rather, Facetime.

Hankins-Sanford is known for these random Facetime calls, something his high school coach Brian Frasier said he prefers over texts.

Frasier said the two stayed connected through FaceTime during high school and continue to do so.

Frasier said Hankins-Sanford values the facial expressions he can see on a video call versus a text or regular phone call.

Shy Sanford added that when he gets Facetime calls from his brother, Jackson and Davis are “always” in the background.

Hankins-Sanford grew up in Charlotte as the youngest of eight children and was nicknamed “Ducky” by his grandmother.

“He was the youngest sibling, so he just always swore he could do everything we do,” Shy Sanford said. “… He was known for always sneaking away from the house, trying to come with us with his Pampers on and go to the pool.”

Hankins-Sanford played multiple sports growing up. His brother said he thought football would be his sport of choice after he led his middle school team to an undefeated season in seventh grade.

Frasier joked that Hankins-Sanford quit playing football because he didn’t have enough time to play video games after practice.

Averaging 16.5 points and 7.9 rebounds a game during his senior year, Hankins-Sanford earned a three-star rating from 247Sports.com.  He was rated the fifth-best prospect in the state of North Carolina.

Paris has been impressed with Hankins-Sanford’s tenacity and strength on the court.

“He’s aggressive and explosive,” Paris said. “I keep talking to him about ‘don’t ever change that.’ No matter what I say, ‘don’t ever stop being aggressive.’”

The aggressiveness has caught the attention of his more highly rated teammate.

“He’s one of the most intimidating players I’ve ever played against,” Jackson said. “Even in practice, sometimes, I can’t get by him. I tell him before every practice to guard me every possession so I can get used to a physical defender.” 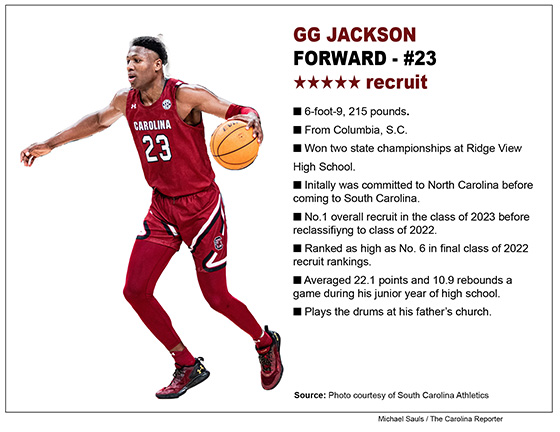 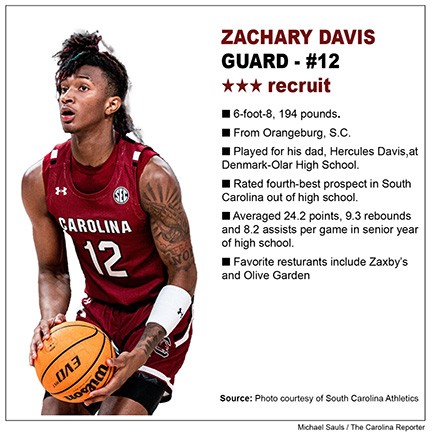 Freshman guard Zachary Davis, from Orangeburg, is one of six South Carolina natives on the Gamecocks’ roster this year. (Photo courtesy of South Carolina Athletics, graphic by Michael Sauls) 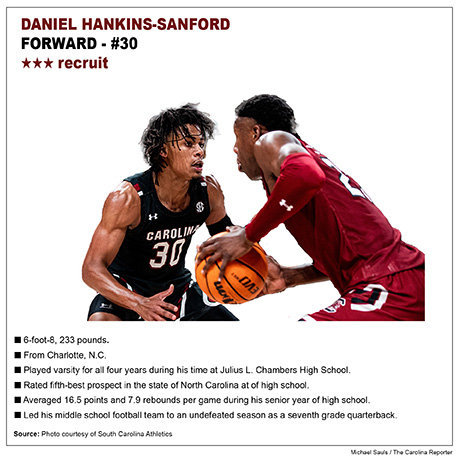