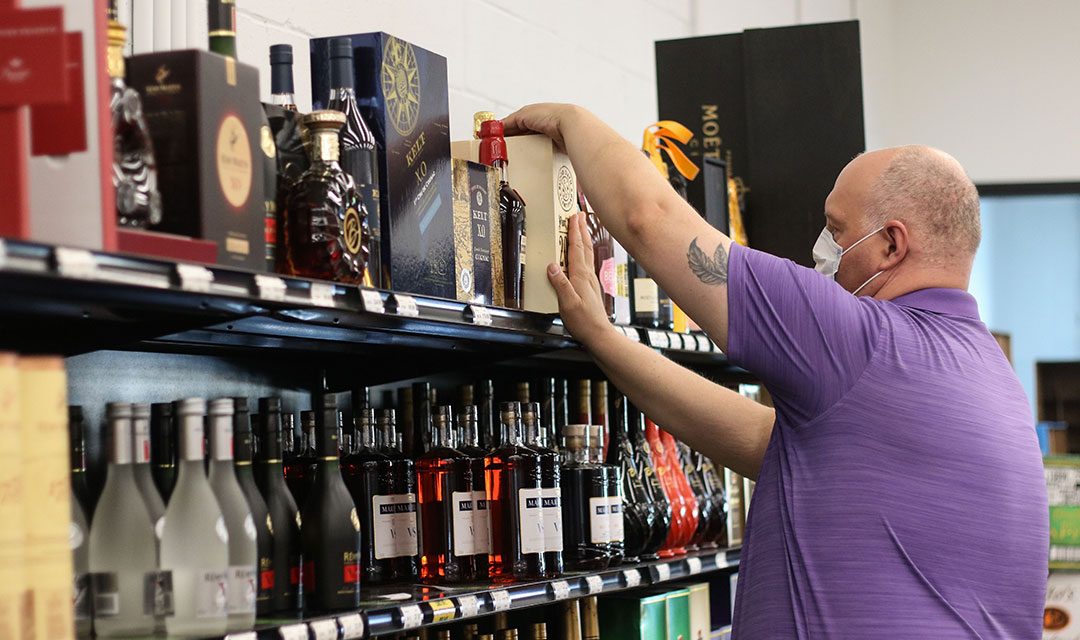 Gary Kangas, area manager for Green’s Beverages, stocks shelves at the Garner’s Ferry store on Wednesday. The store has had to limit what customers can purchase in order to keep their shelves stocked. Photos by Hannah Wade

Chicken tacos this week, but none next week.

Buffalo Trace is in stock but Casamigos is unavailable.

Nationwide, restaurants and businesses are out of luck when it comes to purchasing goods to run their business. The months-long battle for supplies, disruptions in the global supply chain, and pent-up consumer demand during the pandemic affect every aspect of life for business owners.

How are businesses being affected?

“Horrible. It’s stressful because you want to provide everything to the customers,” said Brandi Beaulieu, general manager at Cantina76 on Devine Street.

What Cantina76 has been able to offer guests fluctuates regularly, with beef and chicken being on a constant rotation of whether or not it will be available to order.

“We’ve been really, really good about being scrappy,” Beaulieu said. The cooks there have found ways to substitute certain items but it becomes a day-to-day challenge since everything there is kept fresh, she said.

Hampton Street Vineyard chefs, like Christopher Holme, find themselves in a similar spot. Holme said the increase in price of things like beef tenderloin have forced the restaurant to take items off the menu, a tough decision for many restaurants.

“Its not that it might not be available, it might also be that the price surged. It might be available, but at three times what you were paying before,” said Hernan Martinez, a managing partner at Hampton Street Vineyard.

The lack of supply is caused, in part, by labor shortages happening in the production and distribution industry, according to Carrie Queenan, a management science professor at the University of South Carolina.

“As the demand is going up, whoever’s trying to supply has fewer people to meet it,” Queenan said. The truck driving industry was short 60,000 drivers in 2019 and that number could grow to 100,000 by 2023, according to the American Trucking Associations.

Even though top shelf liquors are out of stock, Beaulieu said this has not affected the customer’s attitudes due to the wide variety of liquors that Cantina carries. This hasn’t been the case for all places – including liquor stores, which are also experiencing supply shortages.

In the beginning of the pandemic, customers at Green’s Beverages didn’t understand the purchasing limits that the store placed on certain liquors, until they started visiting other liquor stores in the Columbia area only to be turned down repeatedly when something was out of stock.

“People used to think we were the only ones doing it ‘cause they could go anywhere else and they could buy whatever they wanted to buy. But some of your smaller retailers and your mom and pop retailers and some of the big ones like us finally had to start putting a limit on what people could get,” said Gary Kangas, area manager for Green’s Beverages.

The store averages between 50 and 75 out of stock items weekly, according to Kangas.

Casamigos is one tequila brand that has been difficult for stores to restock in the past six months, but other brands have been affected periodically throughout the pandemic.

Kangas is having to put limits mainly on tequilas such as Patron, Don Julio, Teremana, and Jose Cuervo.

These shortages started taking place during quarantine but it was not just liquors, “Corona had enough bottles at one point but not enough bottle caps,” Kangas said.

Why so many shortages now?

The shortage of supplies across the country is yet another complication of the COVID-19 pandemic, which began in March 2020 and is still rampaging across communities as Americans deal with the rise of the Delta variant and battle over vaccinations.

“What happened was a lot of countries stopped producing for a significant amount of time, but, especially in the U.S., the consumption didn’t drop,” said Giuliano Marodin, continental professor of operations and supply chain at the University of South Carolina.

The lack of supply paired with a constant demand for certain items throughout the pandemic caused shortages in products that could take months or years to replenish.

“Demand changes happen immediately, but as you go further up the supply chain we make decisions months and years in advance so we can’t react to that, that quickly,” Queenan said.

Queenan and Marodin alike said the current shortages are like nothing they’ve seen in their multi-decade careers. 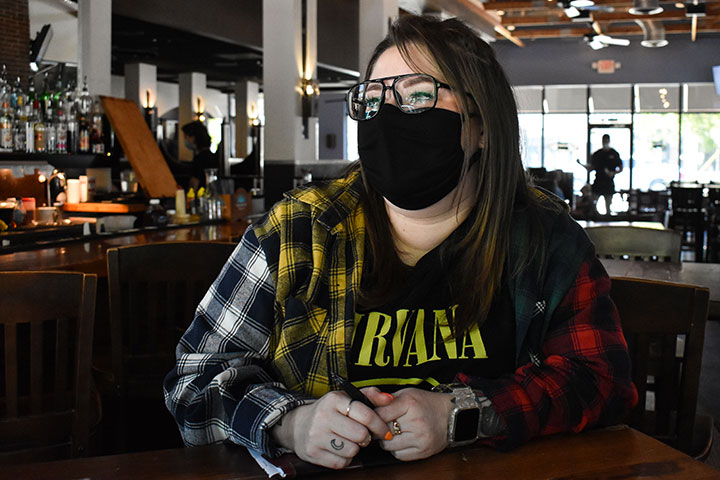 Brandi Beaulieu, general manager at Cantina76, has run into issues with keeping liquor and some food products in stock at the restaurant. 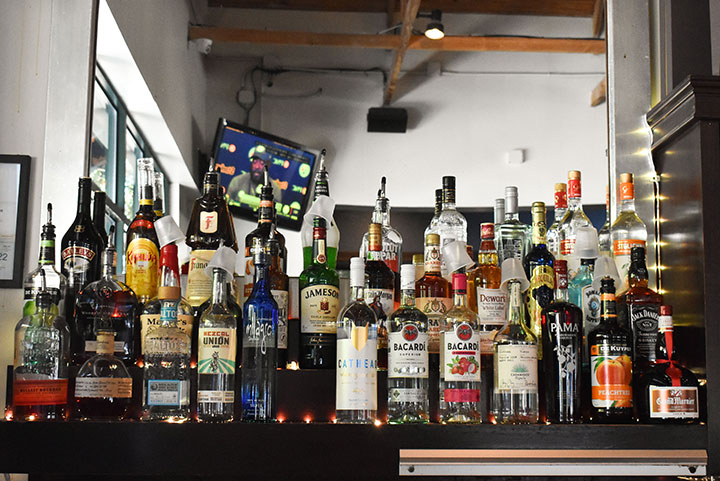 Liquor sits on the bar at Cantina76 on Devine Street. Some liquors, like Casamigos, are hard to keep in stock due to the shortages caused by COVID-19. 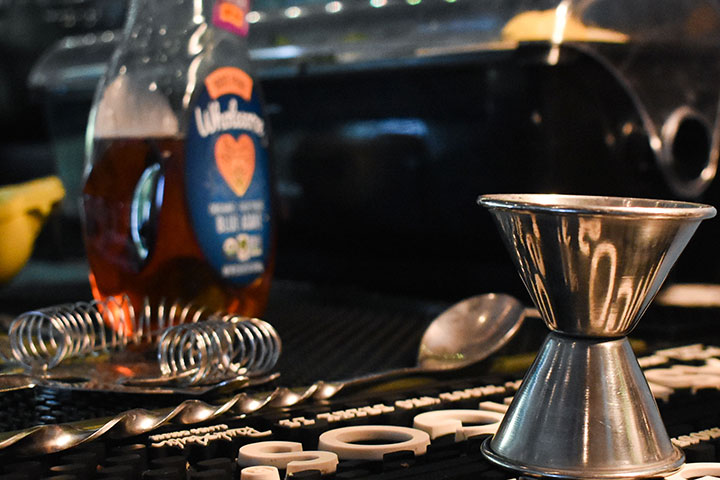 Restaurants and liquor stores have been hit hard by supply shortages in their businesses. Demand continues to go up as more Americans continue to spend money, but the supply remains strained by the effects of the pandemic. 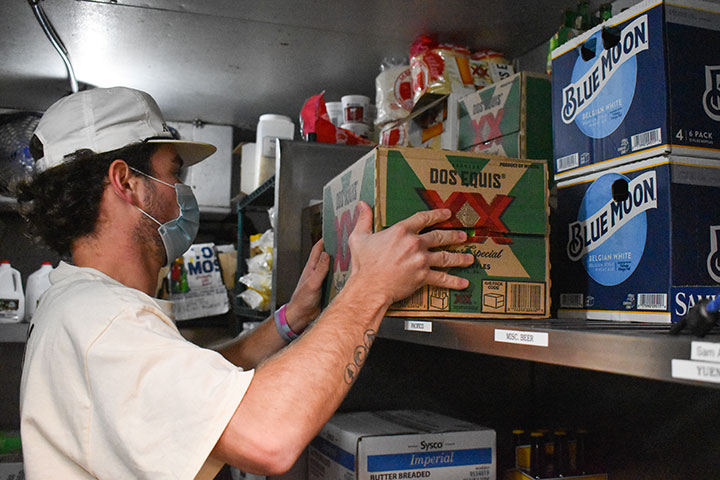 Ryan Chafe stocks the freezer at Cantina76 where getting certain items like chicken, beef, and liquors is a challenge in the wake of COVID-19.