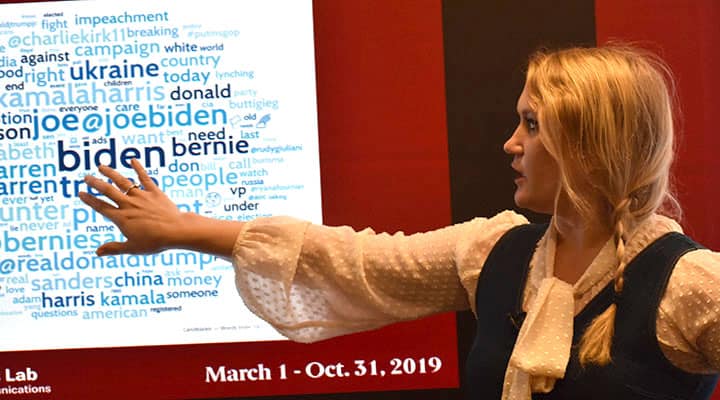 By NICK PAPADIMAS and LEE WARDLAW

Kaitlyn Park, manager of the University of South Carolina’s Social Media Insights Lab, analyzed social media trends of Democratic candidates across South Carolina. The lab located in the School of Journalism and Mass Communications is part of the College of Information and Communications.

In Park’s most recently published report from last month, she found the Massachusetts senator is on the minds of South Carolinians.

“Essentially, what we saw last month was that Elizabeth Warren was the candidate that had the most steady increase, not only in positive sentiment but also in share of voice. Unfortunately, October was not as good of a month for her as (California) Senator Kamala Harris,” Park said.

She said Harris hasn’t performed well on social media on a national stage.

“In the media, in particular, a lot of people are quick to count her out,” she said.

Harris is having successful social media engagement in South Carolina after her decision to visit Benedict College on Oct. 26, according to Park. Harris was among 10 Democratic candidates who came to the historically black college at the invitation of the 20/20 Bipartisan Justice Center to talk about criminal justice reform.

After Harris attended Benedict, “we actually saw an increased share of voice as well as positive sentiment,” Park said.

Harris abruptly pulled out of the forum because President Donald Trump was also invited to Benedict by the 20/20 Bipartisan Justice Center. Trump delivered an address on Oct. 25 and accepted the center’s Bipartisan Justice Award. Harris reconsidered and spoke on Oct. 26.

“She just had more visibility which improved her name recognition,” Park said.

Park’s analytics don’t take negative posts into consideration because in South Carolina, a historically conservative state, Democratic opinions don’t take up most of the dialogue.

If social media analytics are a measuring stick for success, then former Vice President and Democratic presidential candidate Joe Biden could be in trouble, said Park.

“People on social media actually cannot dissociate him from Ukraine,” Park said.  “What we’ve seen is a decline in positive sentiment over the past few months and he’s really struggling to get what was already low positive sentiment back. Now it’s plummeted just a little bit further than it did in September.”

Female candidates could be trending in a positive direction, said Park.

“I do think the female candidates are truly the ones to watch,” Park said.

According to Park, what intrigued her was the fluctuation between the female candidates.

A crucial factor for the women being the candidates to watch includes Warren’s engagement with the public at events.

“Elizabeth Warren usually makes a concerted effort to stay afterward and takes a selfie with every person that wants one, and she answers all questions, and participates in the media gaggle,” Park said.

After the Kamala Harris incident, Warren and the other candidates didn’t show up as much on social media.

“I can’t necessarily prove that’s what caused a decline in popularity, but I do think it did affect them to some extent because Kamala Harris was the face that was consistently there and answering questions,” Park said. “Social media listening is not a poll, but it is a barometer. It is a good way to assess and measure excitement, and excitement does matter in local and national elections.”

With plenty of time remaining until the February Democratic primary, the race is still up in the air for the Democratic Party in South Carolina.