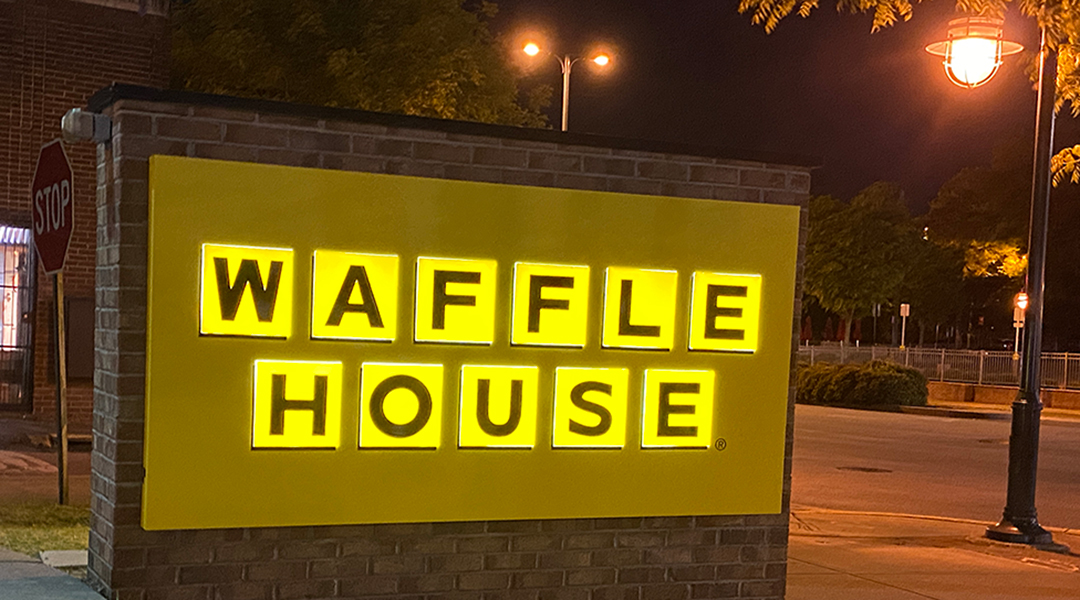 The Waffle House in Five Points had to order a custom sign because patrons would steal letters off their old one. Photos by: Harrison Belk

The capital city’s Five Points entertainment district is known for its nightlife as the hub for college students. Through the years, students have found any occasion to go out with friends and drink, leaving them starving for a late night snack.

Employees of these establishments have to serve these students, many of whom are inebriated. That’s given them a lot of memorable encounters to talk about.

The Village Idiot pizza has been a Columbia late night food staple for over 30 years.

Known for pumping out New York style pizza and drinks, the Five Points location, reminiscent of an adult treehouse, holds many memories from over the years.

Owner Brian Glynn met his wife working at the Village Idiot when he was a cook and later went on to purchase the location in 2003.

When Glynn was asked to share a story from the late night crowd, one stuck out to him above all others.

“That night there was a bit of a fracas, maybe even a ruckus if you will, out in the street. Me, the bar manager and the door guys had to go outside and make sure everything was fine,” Glynn recalled.

While the restaurant’s management was outside handling the situation, one patron took it upon himself to go behind the bar and start serving drinks to the crowd.

However, the most decorated Olympian of all time, Michael Phelps, quickly ran into an issue. He could not figure out how to run the register.

But getting some late night food in Five Points is not always fun and games.

While Waffle House is known for its jovial mood, the people who work behind the counter usually aren’t laughing. Employees at Waffle House in Five Points said the late night antics of drunk college students make their jobs challenging.

“When you’re intoxicated a lot of people like to put on the show,” Waffle House cook Messiah Hales said.

Hales has been working at Waffle House in Five Points for only a year and has had to break up fights, answer unfunny prank calls and watch students steal letters from the Waffle House sign. The letters are frequently stolen by members of fraternities and sororities who have been forced into doing challenges, Hales said.

A few weeks earlier, the restaurant was forced to order a new sign with non-removable letters to help curb theft.

Hales believes college students have a tendency to act disrespectful at Waffle House because the restaurant chain has a reputation for being rowdy. Then again, he knows these same students are less likely to act up when they go out to eat with their parents.

“When you come in here, act like you do with your mama,” Hales said. “If you was at Applebees, if you was at Outback, you wouldn’t act like that.”

While working the late night shift has its share of ups and downs, Hales said his paycheck is almost enough to make up for everything he is forced to endure during his shift.

“My favorite part is that I get to take their money. It’s like a reward, the longer I deal with you, the more money I can take from you,” Hales said

Another popular option is Cookout. With a closing time of 5 a.m. students always rely on this fast-food chain. Cookout has been in Five Points since 2011.

Students get everything from a milkshake to a Cookout tray which includes a sandwich, two sides and a drink for $4.99. This deal alone makes it a place that students can get the most bang for their buck.

Employee Amarae S. said that she has to deal with a lot of drunk students. She said employees have to go outside and pick students up because they fall over and cannot order.

She said one Sunday a woman visited and went “ballistic” because she wanted a chicken sandwich. Amarae said she could not hear her over the intercom and the woman proceeded to continue screaming and ask for a manager.

“We let her speak to the manager and she told us if we work here, this is the wrong job if we don’t want to be yelled at,” said Amarae.

She said the restaurant has the most problems with customers who visit on Sundays.

Other areas in Columbia, like Main Street and the Vista, have developed significantly over the last decade, but the future of Five Points is more uncertain. The cultural district that is primarily for college students has seen stricter liquor licensing rules enacted and an increased presence of the South Carolina Law Enforcement Division.

In an interview with The Carolina Reporter, Columbia Mayor Steve Benjamin reflected on the development he has seen in the city throughout his tenure. The outgoing mayor placed emphasis on the growth of Main Street and the new Bull Street District, but said that Five Points remains a challenge.

“It’s been a real tug over the years, trying to make sure we have a good vibrant nightlife for young people,” Benjamin said.

Benjamin said he would like for UofSC students to stay in Columbia after graduation and understands that maintaining an entertainment district will help his wish become a reality. However, only time will tell if the late-night Five Points scene can transform from a college playground into a hub for young adults. 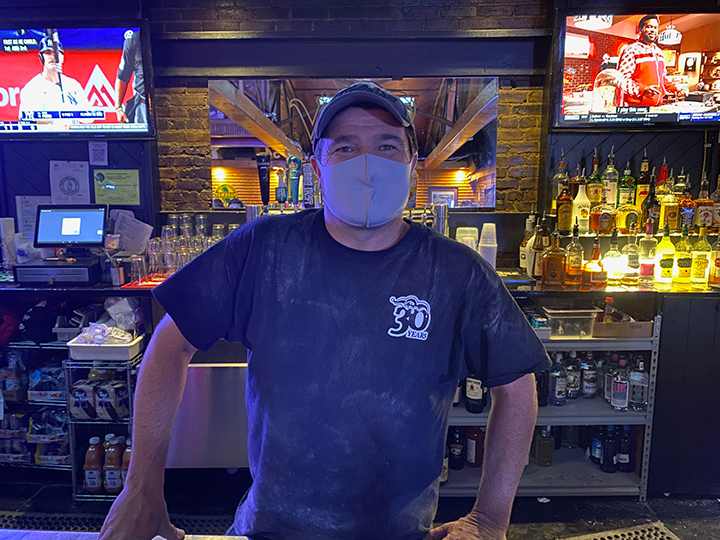 Brian Glynn, now the owner, met his wife working at Village Idiot Pizza when she was a host and he was a cook. 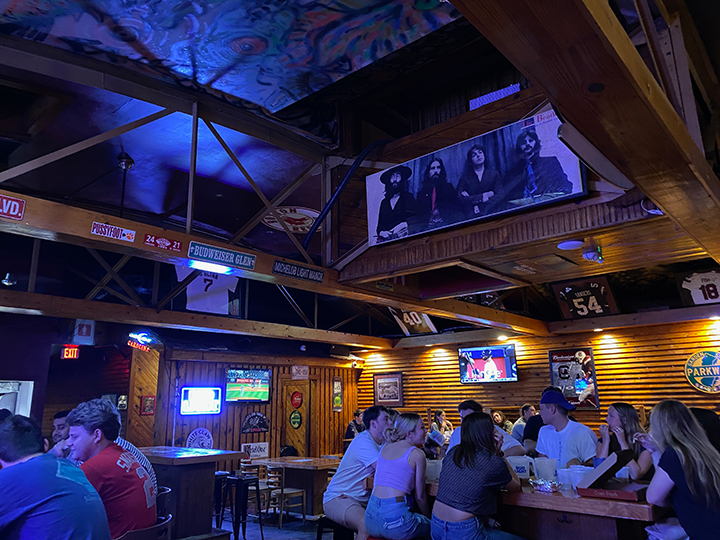 Village Idiot Pizza has a consistent late night crowd most nights of the week. 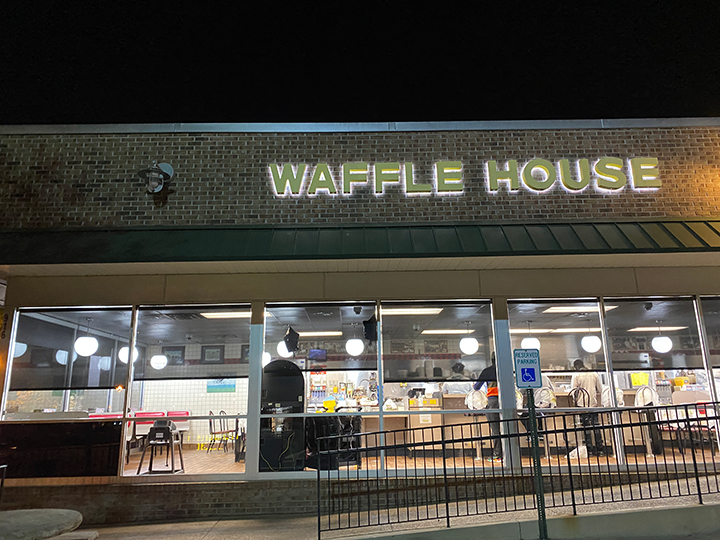 The Waffle House in Five Points is a short walk from the bars which makes it a popular destination of college students. 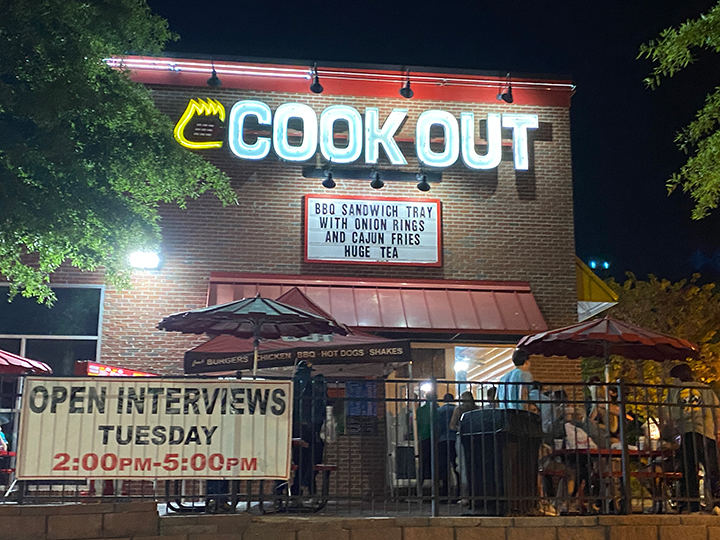 The Cookout in Five Points has opted to use a walk up window rather than opening their dining room due to some customers shenanigans.