What is body image resiliency? 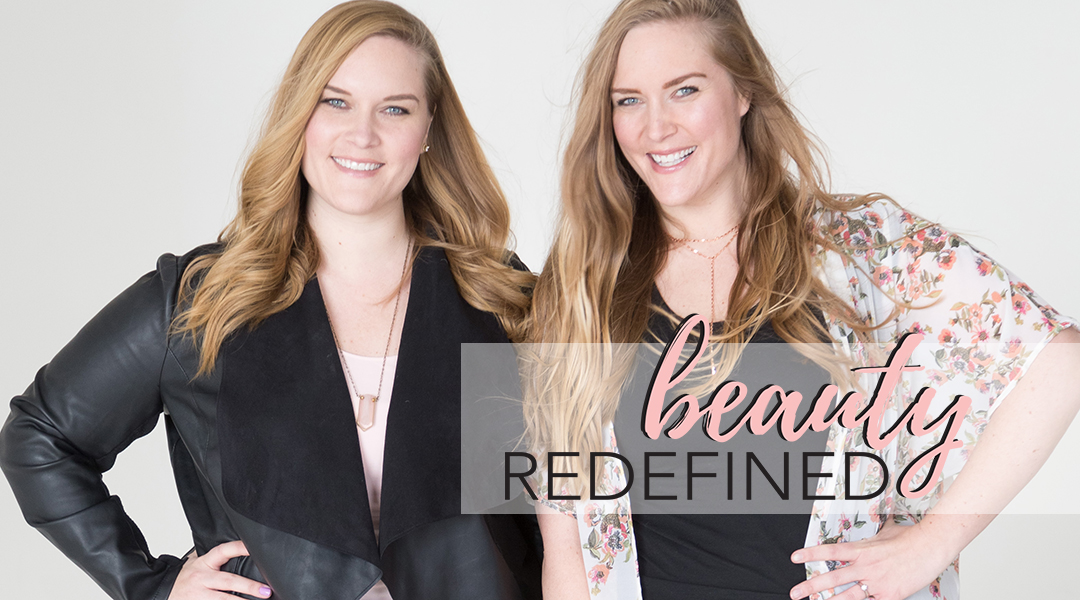 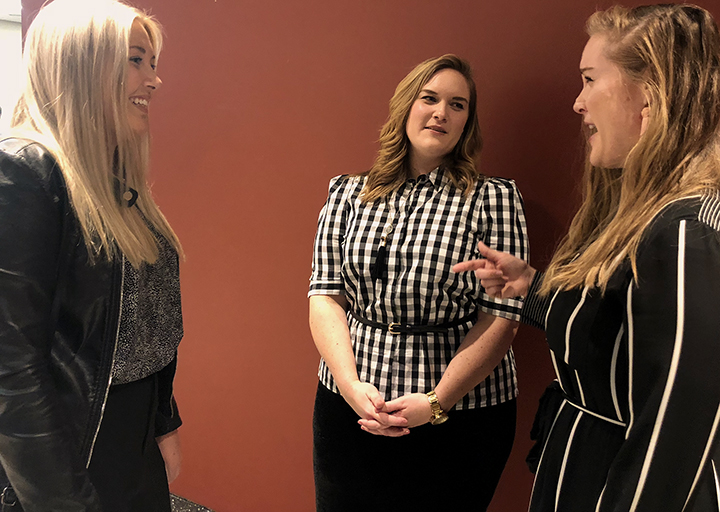 Communications experts Lexie and Lindsay Kite discuss body image resilience theory in hopes that women and girls will learn to appreciate their whole self. 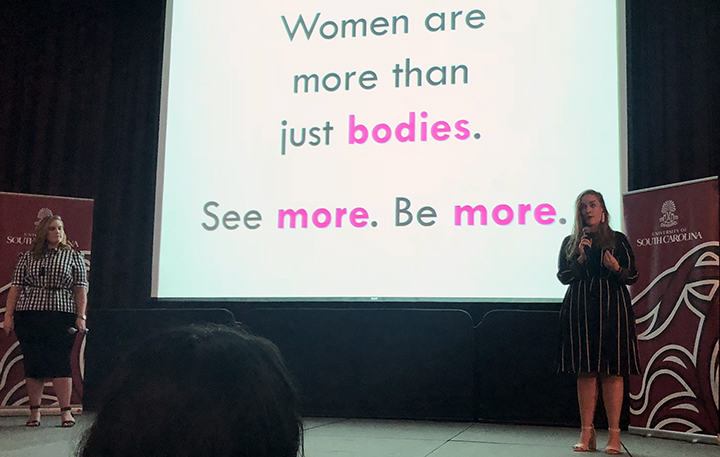 Lexie Kite developed body image resilience theory while doing her masters dissertation research at the University of Utah. She co-founded the non-profit organization Beauty Redefined with her twin sister Lindsay to share the message. 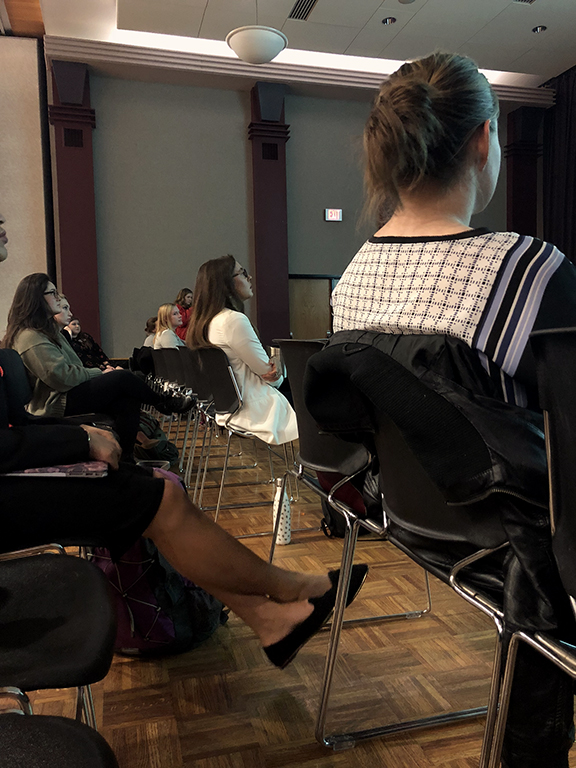 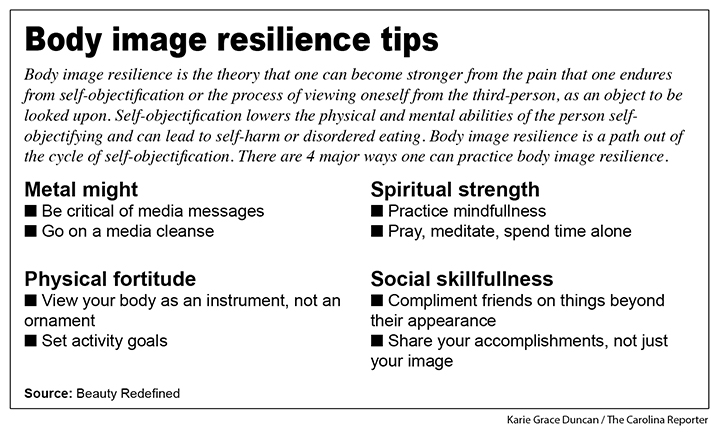 Have you ever had the feeling that you suddenly needed to fix everything about your appearance before you started an activity?

Viewing yourself from the outside looking in is called self-objectification, and according to communications experts Lexie and Lindsay Kite it can be very dangerous.

“It’s something that girls and women do throughout their lives from age 3 to 103. It gets in the way of our progress and our happiness in a million different ways,” Lexie Kite said before a March 26 USC lecture.

Lexie Kite said she learned about the harmful impacts of self-objectification while doing her masters dissertation research at the University of Utah.

In studies, girls who are self-objectifying perform worse on standardized tests and athletically.

“While doing that research, I was realizing that there’s no pathway out. That theory just describes the negative spiral of living in a state of self-objectification,” Lexie Kite said. “I needed hope that there was something different.”

So, Lexie Kite developed body image resilience theory by combining self-objectification theory with resilience theory, which says people can become stronger because of the pain they experience instead of despite of it.

Then, along with her identical twin sister Lindsay, she founded Beauty Redefined, a nonprofit dedicated to teaching body image resilience online and at speaking events. They earned their doctoral degrees in communications from the University of Utah in 2013 after earning their master’s degrees from the same department in 2009.

“You must first recognize the pain that you’re going through, because for most of us living in a state of objectification where our looks are the most important thing about us is something we’re used to,” Lindsay Kite said.

People who face self-objectification without realizing there is a problem often turn to disordered eating, which has the highest mortality rate of all mental illnesses.

“By shining a light on it, that’s helping people identify when they are self-objectifying and when they do feel defined by their appearance. Then, giving them the tools to come out of it and choose a better path in the model of body image resilience,” Lindsay Kite said.

About 20 people attended the Momentum Series lecture in Russell House. According to the university, the series is designed to create dialogue on issues of local, national and global importance.

When Lexie and Lindsay Kite first began sharing their message of body image resilience nine years ago, no one was talking about body image.

“So many people try to fix body image issues by telling girls and women how beautiful they are,” Lexie Kite said.

But that method won’t work, she said, because compliments are fleeting and there are more negative body messages lurking around the corner.

“Enough messages try to keep you fixated on your looks as the source of your power, your happiness and your value. If you keep fixating on your looks, you’re not going to get to resilience.”

Four major ways to strengthen body image resilience include: being critical of media messages, setting activity goals that have nothing to do with appearance, practicing mindfulness or meditation, and discussing or complimenting others on things beyond their appearance.

Lindsay and Lexie Kite said women need to be wary of harmful media messages that come from beauty products.

“All the product industry leaders create flaws, but they also create the products and services that will supposedly give you the solution,” Lindsay Kite said.

Other media messages are masquerading as progress. Lexie Kite sites the introduction of plus-sized models on the cover of the last two Sports Illustrated swimsuit issues as one of these pseudo-positive messages.

“It is not progress to qualify to be objectified,” Lexie Kite said. “That’s the same old objectification, packaged up with a different bow.”

However, being resilient about your body image doesn’t mean you have to give up makeup or shopping for fun.

“One way to know if you’re doing something out of love for it or out of shame is by removing it from your life for a minute,” Lexie Kite said. “I pledge regularly to leave the house without mascara on to prove to myself that I don’t have to have it on just to feel normal.”