Who cleans up USC’s stadium after gameday? Future military officers, that’s who 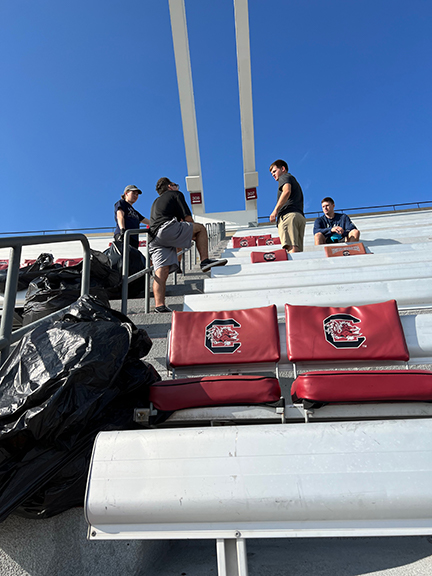 ROTC Cadets bag up trash in the upper levels of Williams-Brice Stadium after a gameday. (Photos courtesy of Capt. Steve Head)

After fans finish tailgating, students stop Sandstorm-ing and the teams head home, there is one thing that remains in and around Williams-Brice Stadium. Trash — and lots of it.

It’s the duty of ROTC cadets from the University of South Carolina to clean up the trash from Williams-Brice and Gamecock Park.

So what do people leave behind? The obvious things are beer cans, popcorn buckets, mini-bottles, unopened bags of snacks and plastic nacho cheese cups.

Capt. Steve Head, an assistant professor of military science, works with the Reserve Officer Training Corps cadets for the cleanups.

“They’re soon to be officers, and they’ll be ordering soldiers to do not so fun things,” Head said. “So it’s kind of a good lesson point for them to, you know, experience kind of like that hardship and labor.”

All ROTC cadets are required to do stadium cleanup. Each branch – Army, Navy and Air Force — cleans up after two home games each season, with the seventh home game falling to all cadets if needed.

Junior cadet Marco Hallbrook said despite how hard the cleanup can be, “It’s nice to be out there with friends you kind of just like goof around and have fun.”

The day after each home game, 70 to 80 cadets arrive at Willy-B bright and early at 6 a.m., according to the cadets. They’re given a section to clean based on their companies, then handed gloves and trash bags and get to work. Some cadets even bring their own trash grabbers to make it easier.

For the next five or six hours, they empty and re-line trash cans and fill bags with every piece of trash fans abandoned. Once bags are full, they’re placed in piles for stadium employees to load onto utility golf carts.

“But there are ways to make it fun,” he said. “Sometimes we split the work up, so you end up with your buddies in the region that you picked.”

Finding unique or unusual trash also makes things interesting. Raymo once found a TV “smashed to pieces” in the middle of Gamecock Park.

Hallbrook said he has found a pair of Vans shoes and various clothing items – most of which were spotted in the student section.

The hard work they do doesn’t go unrewarded, however. USC pays the The Corps around $7,000 per game they clean up, Head said. The money goes to the Cadet Fund, which helps sponsor activities, such as trips to historical battlefields, activities for the companies and smaller, break-out groups.

Cadets recently held a Halloween movie and pumpkin-carving event, where they were able to cater with Chick-fil-A, Raymo said.

“I understand that it’s for our community here at ROTC, for us to fund our events,” Raymo said. “It’s something that’s necessary for us to continue to be a cohesive unit.”

Head also said the cleanups have given him a greater appreciation for how he conducts himself at sporting events.

“It’s real humbling to pick up all that trash,” Head said.

Raymo, too, hopes tailgaters and football fans become more mindful of the trash they create so cleanups are less taxing in the future.

“There’s a way to enjoy the game and also be responsible with your items around you,” Raymo said.

The cadets only have one more home game to clean up after, when the Gamecocks take on Tennessee on Nov. 19. 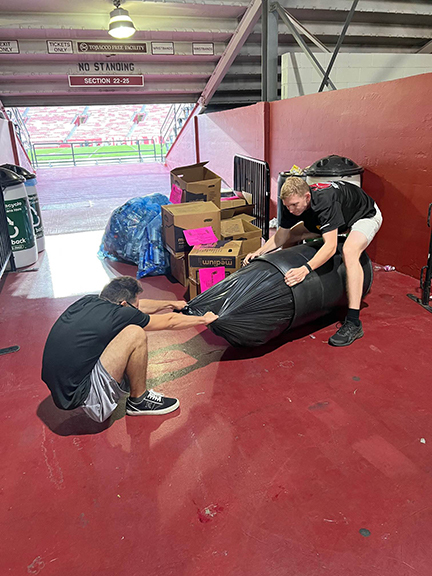 Each branch of cadets clean up after at least two home football games each season. 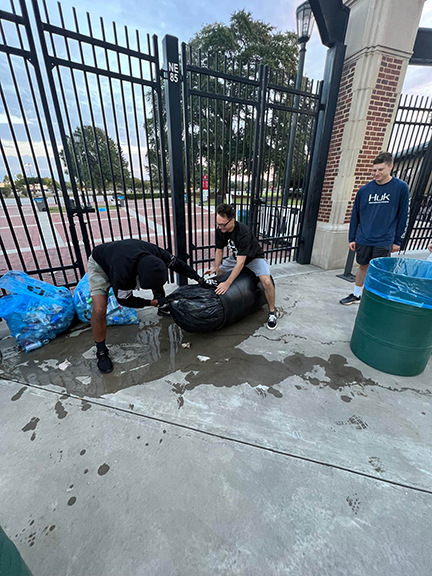 Beyond just picking up trash, cadets also empty every trash can in Williams-Brice and Gamecock Park.