Women take a seat at the S.C. legislative table 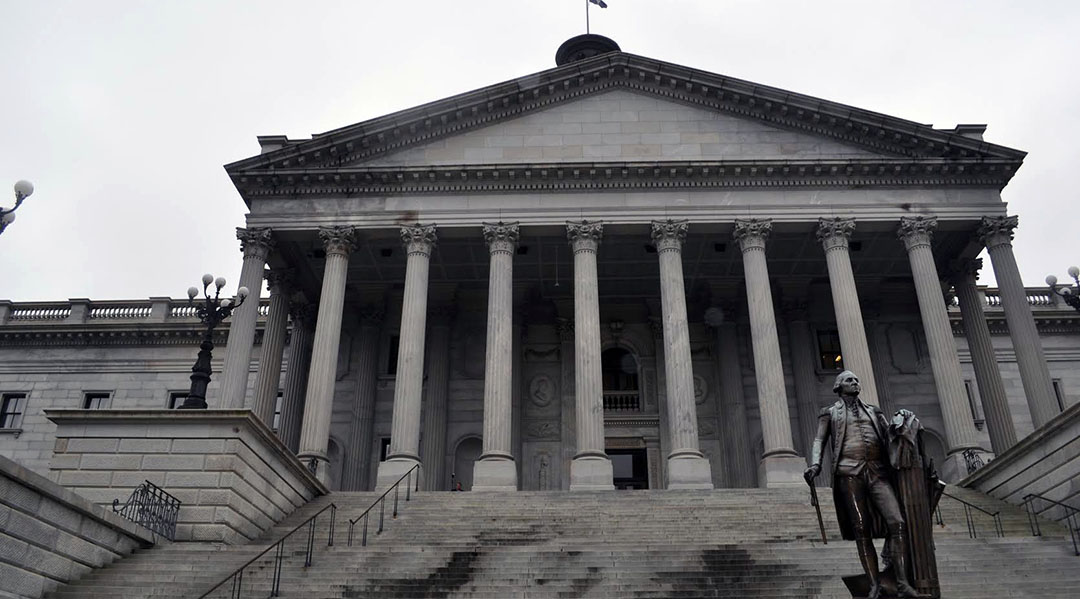 Sixteen percent of seats in the South Carolina Legislature are occupied by women, 23 in the House and four in the Senate. The New York Times ranked South Carolina’s percentage of women in state legislature 44th out of 50 states in the nation.

Out of 170 total seats in the South Carolina State House, only 27 are occupied by women, even though they represent a little over half of the population in South Carolina.

Women hold 16 percent of legislative seats, 23 out of 124 seats in the House and four out of 46 seats in the Senate. The New York Times ranked South Carolina’s percentage of women in state legislatures 44th out of 50 states, among the lowest in the nation.

“You are a minority, the number of men grossly outweigh the number of women,” Rep. J. Anne Parks, D-Greenwood, said as she described what it was like to be a woman in government. “But we do have more women now than ever.”

Though female state legislators say that, overall, they have had no issues when working alongside their male counterparts, some share instances of being forgotten or having to endure derogatory remarks. The women have had to support each other as they witnessed South Carolina government change to accommodate women getting involved in government.

The delegation of women, Republican and Democrat, say they set their sights on the State House to make a difference, to challenge the male status quo and to make sure women are acknowledged in the state’s most powerful, male-dominated bastion of government.

“If you’re going to have a voice, you’ve got to have a seat at the table,” said Rep. Rita Allison, R-Spartanburg. She says it is important that more women step up on both the local and national level to see results.

“As we progress over the years and get more women involved, we will see a different attitude in a variety of equity,” Allison said.

Former Gov. Nikki Haley, the first female governor of South Carolina who went on to be UN ambassador in the Trump administration, has been the most potent symbol of female power in the 21st century.

Haley, a Republican, worked her way up through the ranks quickly, beating the longest-serving legislator, former Rep. Larry Koon, for a seat to represent District 87 in 2004. She became governor in 2010 and was reelected in 2014. Haley left statewide office to become the United States Ambassador to the United Nations in 2017.

As governor, Haley argued for lower taxes and conservative economic policies and was outspoken in her opposition to abortion. As ambassador, she was relentless in calling out dictators and refused to back down when a Trump administration official said she had been “confused” when announcing sanctions against Russia.

“It’s not that men don’t care about those issues. I think it’s that women bring that more to the forefront,” Shealy said.

Haley has been a successful voice for female Republicans, but her peers say it wasn’t easy. Shealy says she was encouraged to run for Senate because of the hatred towards a woman of Indian descent running for governor.

“This person that I had run against for Senate (former Sen. Jake Knotts) was the same person that was adamant that Nikki Haley did not need to be governor because women did not need to run for office and especially a woman who was not white,” Shealy said. “I said, ‘you know what, that just angers me more,’” so I was definitely gonna run again… So that’s when I really got to work.”

Shealy lost her first election in 2008 but defeated Knotts in 2012, even after a primary glitch that required her to get 5,000 signatures as a petition candidate.

“Nobody ever wins as a petition candidate, but I worked really hard and knocked on over 20,000 doors over the last six weeks of my campaign,” Shealy said. “I beat him by over ten percent to become the only woman in the Senate at the time.”

Shealy explained that even the act of making the decision to run wasn’t easy. “They told me when I got kicked off the ballot, ‘Well just wait ‘till next year, you can run against him next year.’” But Shealy said she thought she could still win, so she told them “No, I don’t wanna wait.”

Rep. Ashley B. Trantham, R-Greenville, was another woman who was doubted when running for a House seat. She ran against three competitors, two male and one female, in 2017 for a vacant seat in the House. Everyone involved in her campaign expected there would be a runoff.

“When the numbers started coming in, and I had pretty much been told by the people running my campaign that I was the opposite of anything they’d ever experienced with a candidate,” Trantham said. “I had almost 58 percent of the votes.”

Her determination is something that she picked up at a young age.

“If I wanted something, I went for it. I didn’t even consider that there would be obstacles because I’m a female,” Trantham said. She explained that when she would help her dad at Happy Cow Creamery, a family-owned dairy farm in Pelzer, there would be physically demanding situations that her dad didn’t want her to do.

“That made me more determined to do it… I’m gonna do it and I’m gonna prove that it can be done and there are not limitations on me,” she said

Even though these women hold less than a quarter of legislative seats, they’re already seeing differences in government.

“We are strong-minded, we are tough,” Trantham said in describing the women in South Carolina’s Legislature.

According to Shealy, since women have come into the Senate, more legislation has passed that takes care of children affected by the S.C. Department of Social Services, in foster care and in group homes as well as people in domestic violence situations.

“We will continue to see progress if women continue to run,” said Dillard, who encourages women to get involved. “Women voting as well, we have to ask candidates what they will do about issues.”

Dillard, along with Allison, Parks, Shealy, Tranthum and the rest of the female legislators, hope to see more women get involved in government and sit at the table.

“When you aren’t offered a seat at the table, you pull up a folding chair and take your seat,” Shealy said. 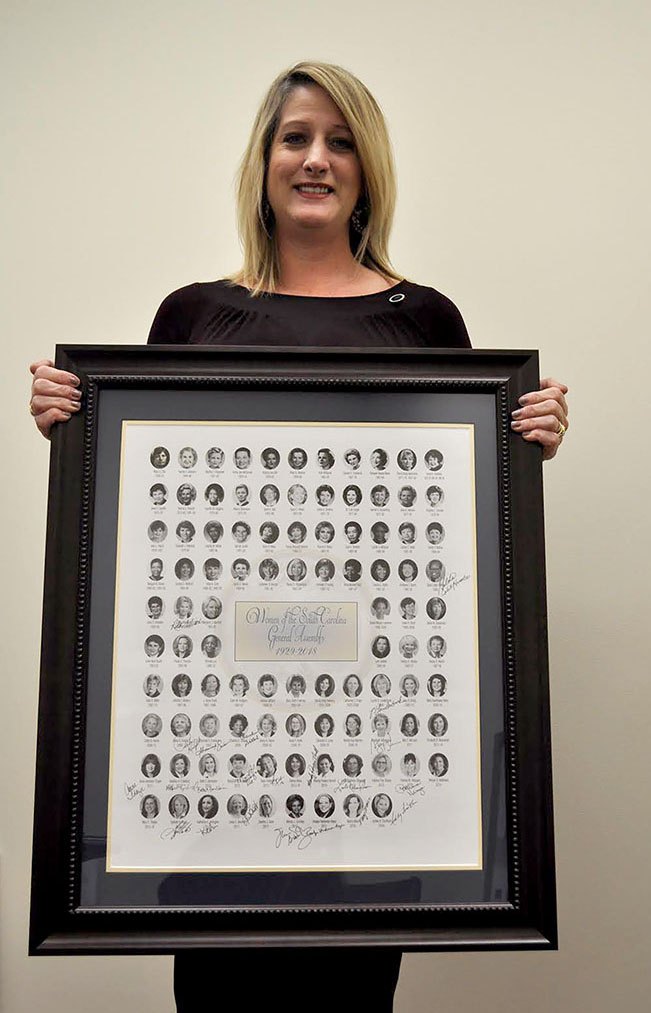 Rep. Ashley B. Trantham, R-Greenville, holds a photo titled “Women of the South Carolina General Assembly 1929-2018.” Trantham is getting everyone currently serving to sign the photo because she believes they all have taken part in making history. 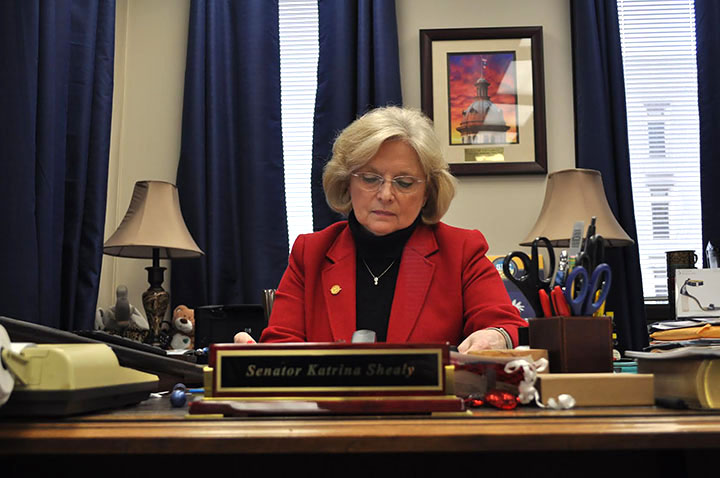 Sen. Katrina Frye Shealy, R-Lexington, was the first of four female senators in the South Carolina legislature. She said that senators had to adjust to saying “members of the Senate” instead of “gentlemen of the Senate” when she joined the Senate. 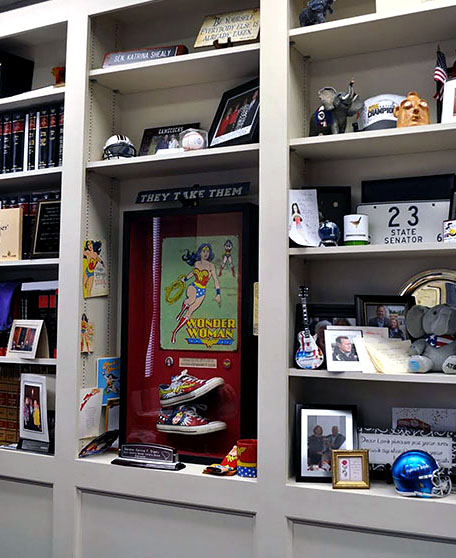 Sen. Shealy walked in these Wonder Woman tennis shoes to go knock on over 20,000 doors in the last six weeks of her campaign as a petition candidate against former Sen. Jake Knotts in 2012. She beat Knotts by over ten percent and became the only woman in the Senate at the time. 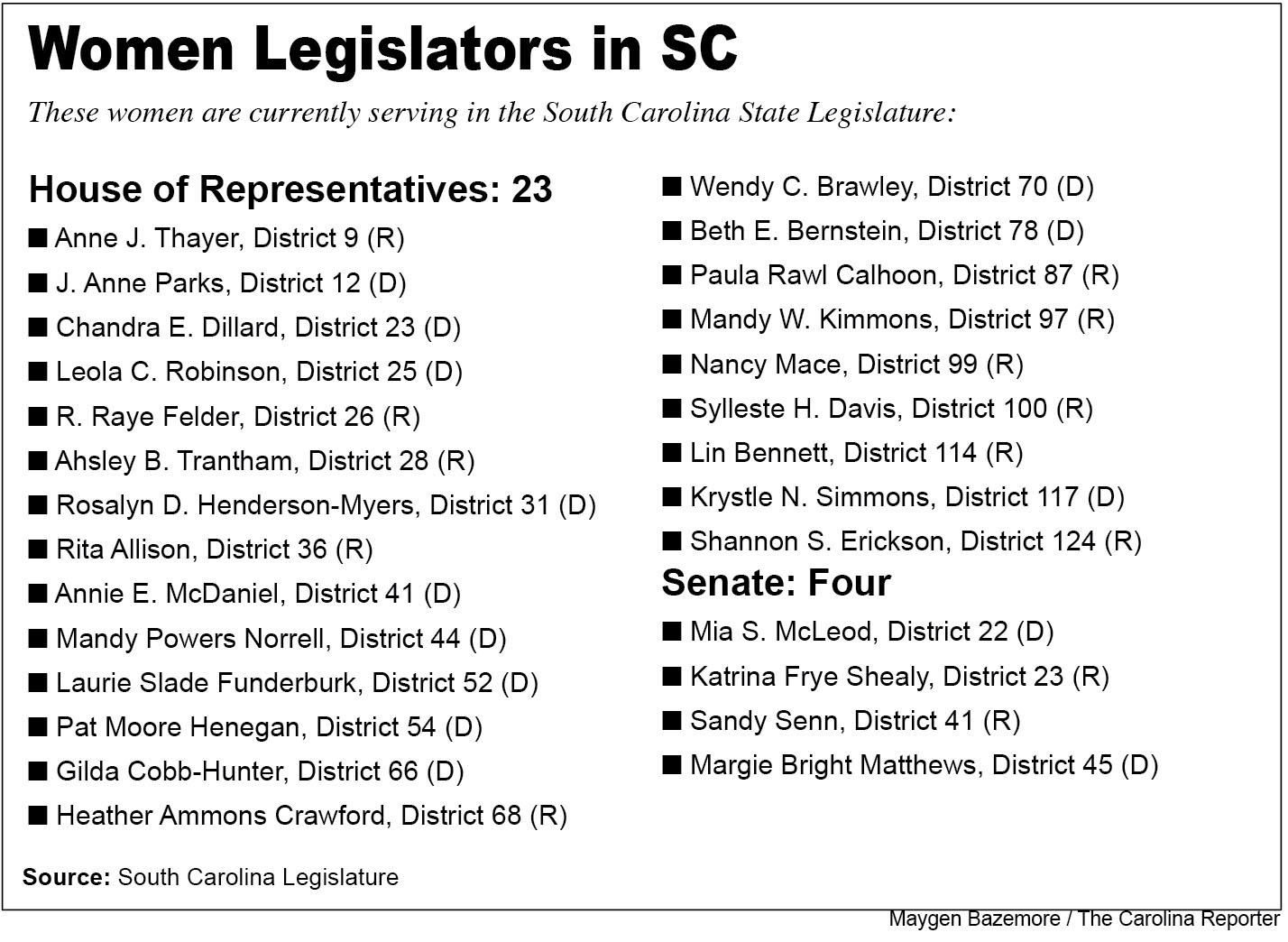