You may be training your dog the wrong way

The way you train your dog may be detrimental to their health.

Negative training methods have proven to have bad effects on a dog’s well-being.

A new research study from Ana Catarina Vieira de Castro, Ph.D, at the University of Porto in Portugal and published by bioRxiv, notes that punishment-based training will lead to stress for dogs. Aversive training is also considered a punishment-method in which the dog doesn’t receive a reward for doing a certain task.

Kelly Hobbs, a dog owner from Fort Mill, thinks negative training should be used rarely, if at all.

“I will use some what I call negative reinforcement; like if I put a bowl of dog food down and I put my hand over it and they growl, I will correct that (but) it’s a matter of making them sit.” Hobbs said, “It’s not (a) terrible negative. (I) just make them sit, make them wait, (and I) put my hand there, and then I’ll do it again.”

Researchers also found that dogs trained in the punishment-method were more likely to be pessimistic, according to Castro. Researchers working with Castro also found that aversive training can cause dogs stress immediately and long term.

Alan Wooten, the owner and trainer for Queen City Canine in Charlotte, believes that positive training is not as effective.

“Yes, negative training causes stress, but I don’t think there’s a problem with that,” Wooten said. “I think that where we’ve gotten with that training is that we’ve gotten into this realm where we can’t ever bother the dog.”

According to the study, dogs that were reward-trained didn’t show signs of stress like licking and yawning.

Some reward-based methods are giving out treats, praising the dog and playing with them. 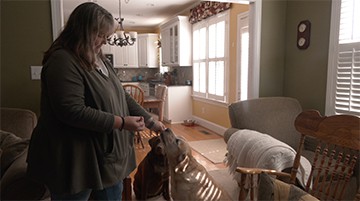 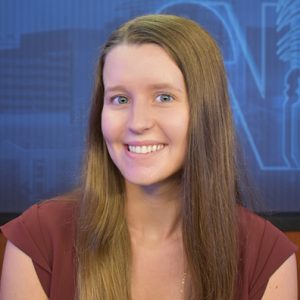 Caroline Wolfe is an aspiring newscast producer from Fort Mill, South Carolina. She has loved video production since high school and always wanted to produce shows. Wolfe interned at WCCB-TV in Charlotte, North Carolina, where she wrote stories for air and boothed morning newscasts. She also does freelance videography for a real estate company. Her goal is to become a producer for a local television station. When she’s not behind the camera, she spends her time playing with her dog, Millie and reading.