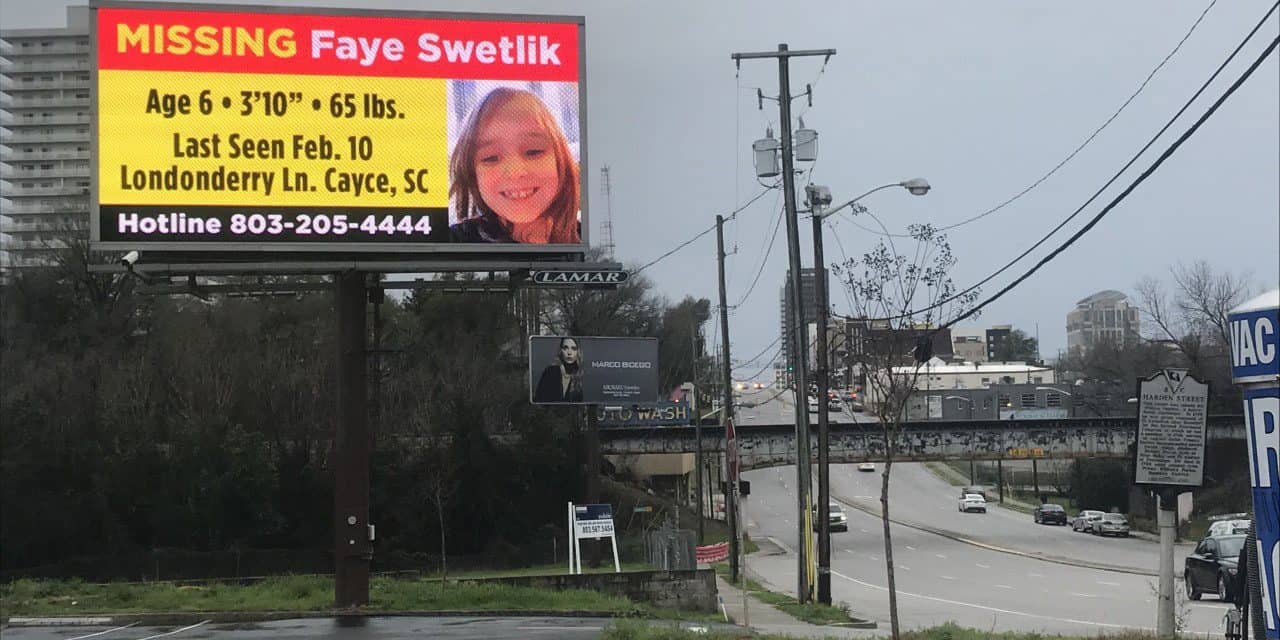 Billboards dotted the Midlands as police searched for 6-year-old Faye Marie Swetlik, whose body was found Thursday. Police consider her death a homicide and continue to seek information from the public through a hotline 803-205-4444.

The body of 6-year-old Faye Marie Swetlik was found Thursday, three days after the first grader disappeared while playing in her yard, Cayce Police said.

Byron Snellgrove, Cayce department of public safety director, held back tears as he announced the intensive multi-jurisdictional search had turned into a homicide investigation. He said the body of an unidentified male was found in the same vicinity as the body of the young girl, although he offered no details about the discovery of the second body. Police said the investigation was ongoing and declined to comment if the body was related to Faye’s investigation.

“It is with extremely heavy hearts that we are announcing that we have found the body that the coroner has identified as Faye Marie Swetlik,” said Snellgrove as he addressed a room of media organizations that had followed the investigation for days. Lexington County Coroner Margaret Fisher positively identified the body.

Snellgrove said he had no more information to report on the homicide investigation and declined to take any questions.

Faye was last seen around 3:45 p.m. Monday and was reported missing around 5 p.m. Police circulated a video of the child getting off of the school bus where she was met by her mother. She was last seen playing in her yard.

Authorities had worked tirelessly since Monday night to find Faye before discovering her body. SLED, the State Law Enforcement Division, and the FBI were called in to assist the investigation.

“Our investigation is the largest-scale investigation I’ve ever been a part of. Something that we rarely see in this area,” said Sgt. Evan Antley, a Cayce public information officer.

No information has been released about the body of the deceased male also found in the Churchill Heights neighborhood where Faye lived.

“At this time, we feel that there is no danger to the community. We will continue to provide more information as it becomes available,” Snellgrove said.

The police asked the public to continue giving any information to law enforcement. This includes information related to a silver sedan that was photographed near where Faye was last seen.