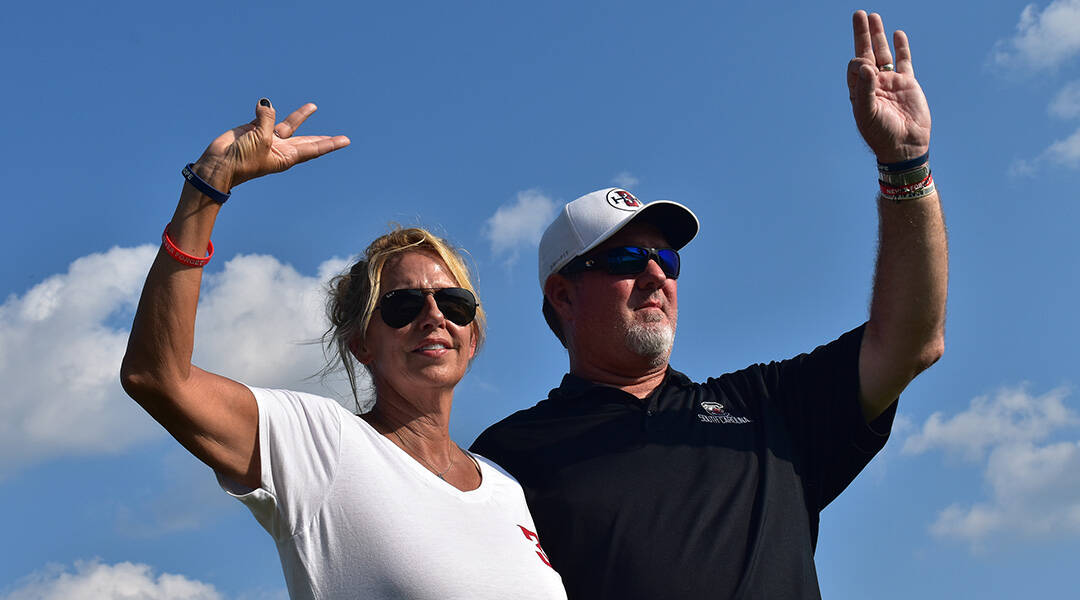 On a recent Tuesday, the family of Gamecock starting quarterback Ryan Hilinski was enduring the typical travails of a home remodel – walls were torn down, carpet was pulled up and there was no furniture in sight.

But after a cross-country move from California to be close to their son, one upstairs room in the house was already prepared. It was a room dedicated to their late son Tyler, whom they lost to suicide on Jan. 16, 2018. An autopsy revealed that Tyler, who suffered from depression,  had Stage 1 chronic traumatic encephalopathy, or CTE,  a brain disease caused by repeated blows to the head.  He was 21 and the starting quarterback at Washington State University.

The walls in this room of their new Lake Murray home are covered with posters of Tyler that were signed by friends, former teammates and opponents. Tyler’s parents, Kym and Mark Hilinski, take every opportunity available to talk about their late son.

“There was something about Tyler that was so likable,” said Kym Hilinski. “He always had a smile on his face and always wanted to make sure that everybody else had a smile on their face too. He was very giving, very generous with his heart and with his time. You couldn’t help but love him.”

With the loss of their son and brother, Kym, Mark, Kelly and Ryan became activists in suicide prevention and ending the stigma of suicide, founding “Hilinski’s Hope,” a non-profit organization that aims to remove the stigma of mental illness and aid those who need help.

A group of Washington State students started the “3 for 3 burpee challenge,” as a way to show support for Tyler, who wore No. 3 for Washington State, his family and their cause. Now, South Carolina students want to share their support, too, encouraging fans to hold up three fingers at the start of the third quarter of each game.

Ryan took the field for the Gamecocks for his first colligate start on Saturday against Charleston Southern. While he impressed fans with his throws and athletic ability between the whistles, Ryan took every opportunity to show support for his late brother.

Before the game, Ryan led the charge out of the tunnel and through the smoke. He sprinted onto the field holding up three fingers. After Ryan threw his second touchdown, a 60-yard strike to Bryan Edwards, he pointed to the sky and again held up three fingers to honor Tyler.

Seeing this, a South Carolina fan came up with the “3’s in the third” idea and it eventually made its way to Twitter. As a way to support Ryan and his family, the idea is to have everyone in attendance for Saturday’s game against Alabama stand and hold up three fingers at the start of the third quarter.

The ideas has gained traction among South Carolina fans and Alabama fans, circulating on Twitter since Sunday night. South Carolina Athletics Director Ray Tanner even contributed with a retweet.

“This might be the best idea,” Mark Hilinski said. “It’s a silent salute to each other and says ‘Hey, I got you.’ Think about it, we hate each other on the field for hours, but to see two groups come together on the field… I get choked up just thinking about it. It’s a beautiful display of care and support.”

“It goes back to raising awareness,” Kym Hilinski said. “It comes at a perfect time because it’s suicide awareness and prevention month. It sounds like the administration is on board and it’s really going to happen. We are grateful to whoever’s idea it was.”

While the display has yet to be seen, Kym is looking at the bigger picture.

“Wouldn’t it be amazing if it grew,” she said with a smile. “If it went to every stadium across the country? Wow.”

“What this would mean for us is that they are helping us remember Tyler and honor Tyler by supporting suicide prevention and mental health awareness,” she said.

The start of the third quarter in Williams-Brice this Saturday will be special. The Hilinski family and South Carolina students and administration are encouraging everyone to take part of this emotional moment in the stadium. The gesture has the potential to reach hundreds of thousands of people, both in attendance and watching at home, that could potentially need to see this message.

“To me it means one thing. It means ‘We are not alone’,” Mark said. “You talk about generational change? This is it right in front of us. Students with bright minds, compassion and love in their heart could do more than we’ve done in 18 months in terms of bringing the stigma down.” 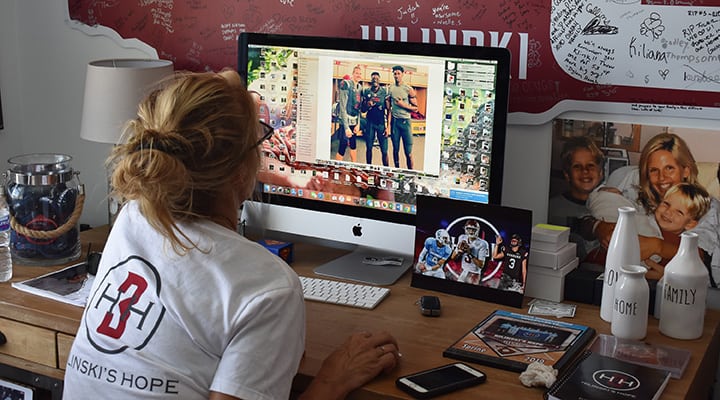 Kym Hilinski looks through photos of her late son Tyler when he played quarterback at Washington State. 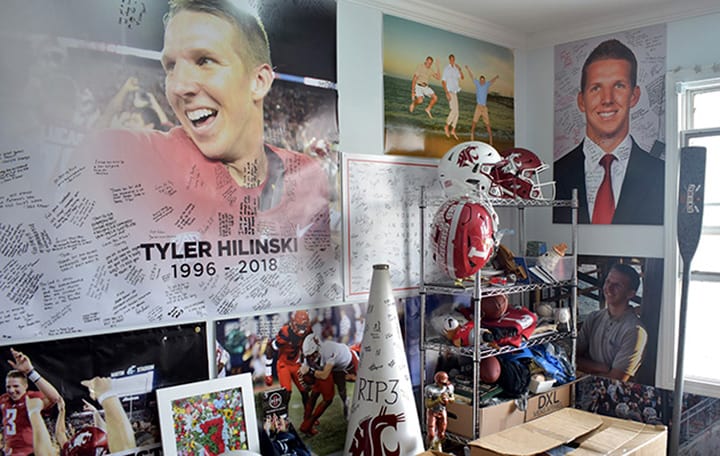 Tyler’s room in the Hilinski’s new home in Lexington is filled with his football memorabilia from his playing days. Tyler Hilinski suffered from depression and committed suicide in 2018. 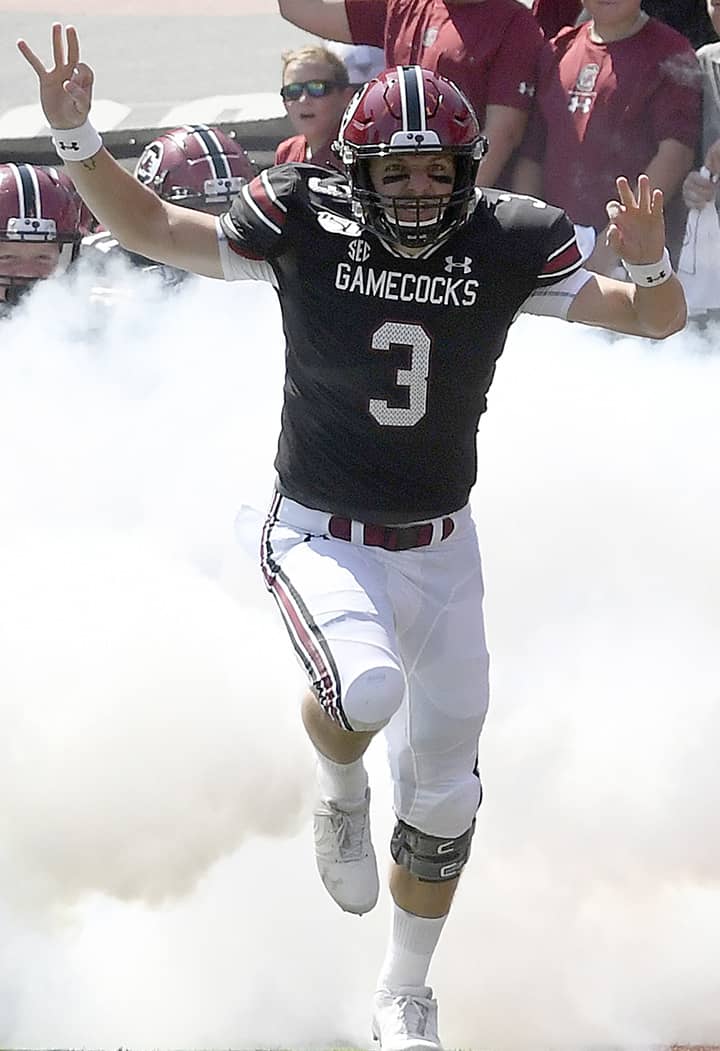 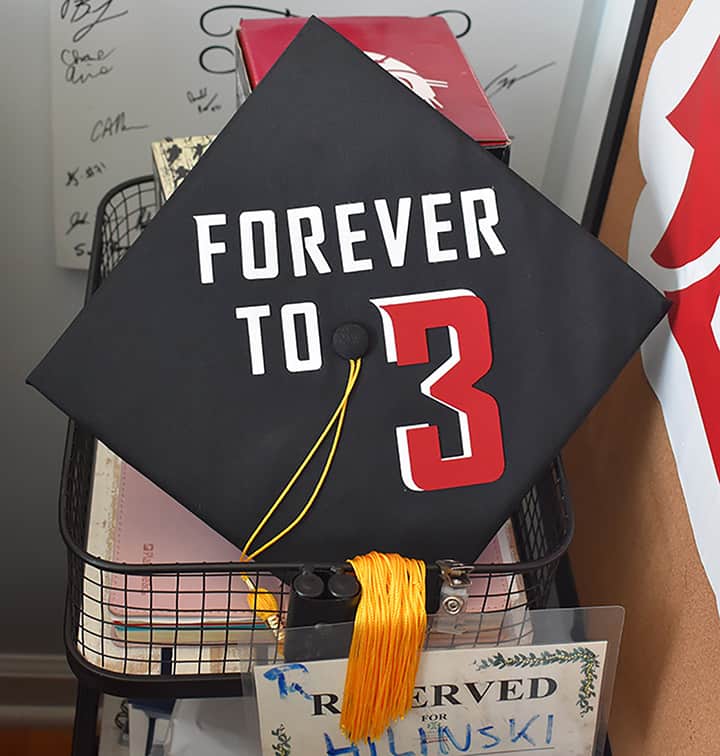 The graduation cap that Kelly Hilinski, the oldest Hilinski brother, wore in remembrance of Tyler Hilinski at his college graduation.