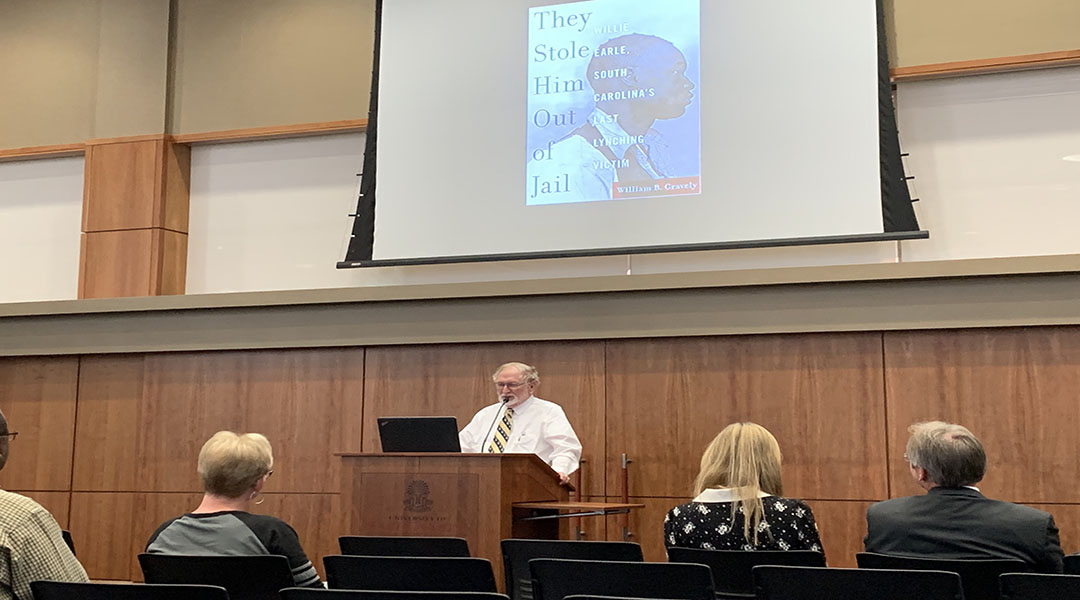 Author and historian Will Gravely talks about his book, “They Stole Him Out of Jail” based on South Carolina lynching victim Willie Earle. The talk took place at on campus at UofSC’s Thomas Cooper Library.

Willie Earle stepped into a cab in Greenville on the night of Feb. 15, 1947 not knowing his planned visit to see his mother would be his last. Earle, an African-American man, and white cabdriver, Thomas W. Brown, were apparently involved in an altercation that left Brown mortally wounded from a stab from Earle.

Earle was arrested near Liberty a day later, although he denied stabbing Earle, and was held in the Pickens County Jail. The following morning, Feb. 17,  a white mob of mostly cab drivers took Earle from the jail, drove him to Greenville where they beat, stabbed and shot him. He was left unconscious on Bramlett Road.

Earle died that Monday, a day after the brutal attack. Brown, the cab driver,  also died that day.

The lynching became national news, with 31 men on trial for Earle’s murder. Even though 26 of the men confessed they were a part of the mob, an all-white jury acquitted all defendants. This was the final lynching in the state of South Carolina.

Author and historian Will Gravely was in second grade when the lynching occurred but has spent the last 40 years trying to put the pieces together. His book, “They Stole Him Out of Jail” tells the story and facts surrounding the lynching case.

“I didn’t have any grand scheme for this thing early on,” said Gravely. “I was following nothing.”

Gravely, a Wofford alumnus, became invested in the Earle lynching when he traveled to Greenville and talked to a prosecutor about the history surrounding Earle.

He has written newspaper articles, conducted interviews and studied the FBI account of the events after 16 years but the twist and turns would never end.

“I have people calling me who tell me, ‘I know people who may have been a part of this’,” said Gravely.

Racism was a part of Gravley’s upbringing. He spoke of a time he was eating in a restaurant in Easley when a black couple walked in and his first thought was, “They don’t belong here.”

He eventually corrected himself after realizing he could not think like that. Gravley realized that his experiences in segregated schools and with racial divides rooted this thought for him.

Gravely also said that an unidentified third party was in the taxi cab with Earle before Brown was stabbed. This is one of many unclear pieces of information involved in this case.

Gravely was stunned by some of his findings. He talked to a friend of Earle’s whose outlook on the incident was more sympathetic toward the slain cab driver than his friend.

“He said to me, ‘Don’t you think that cab driver wanted to live just as bad’,” said Gravely.

“She often wondered what it felt like to be Willie Earle’s mother.”

Gravely told the crowd that he sees similar issues from this time period in today’s society. His main goal in writing the book was to show readers the various roads he went down. He wants readers to experience what it was like for him to compile information, dismiss rumors and meaningless pieces of information and figure out interviews. 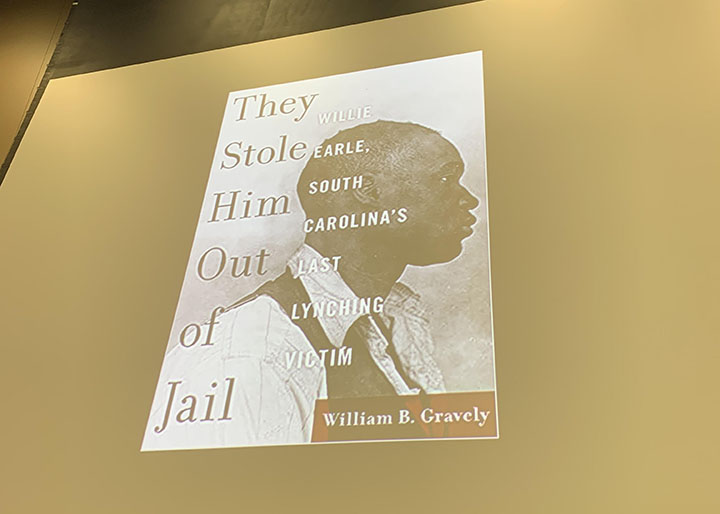 The book details the events that led to the lynching of Willie Earle in 1947 and includes interviews with family members.