A look at the future for “personhood” in South Carolina 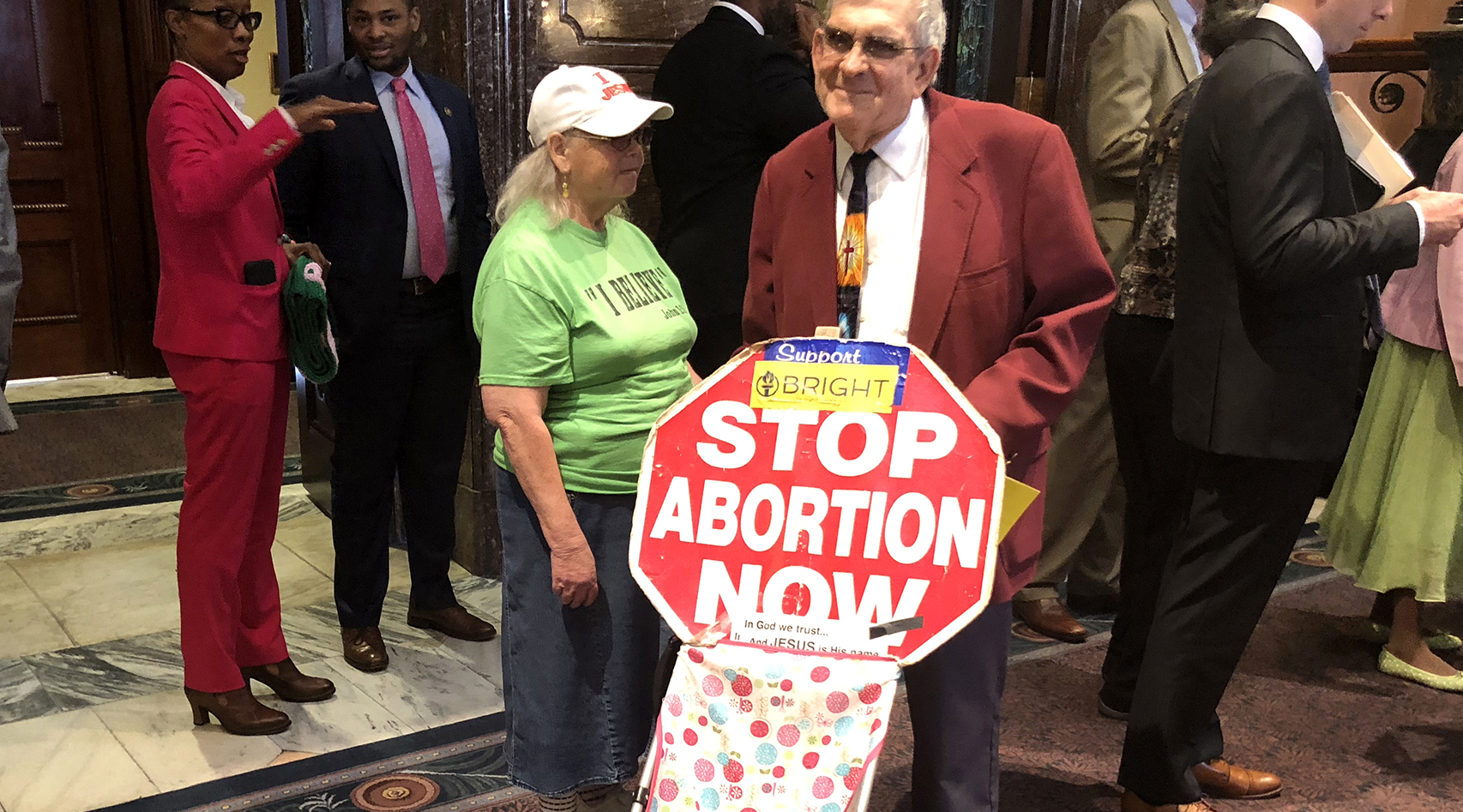 Johnny Gardener has been lobbying for pro-life bills at the State House for 27 years. He says the concept of personhood has growing support. 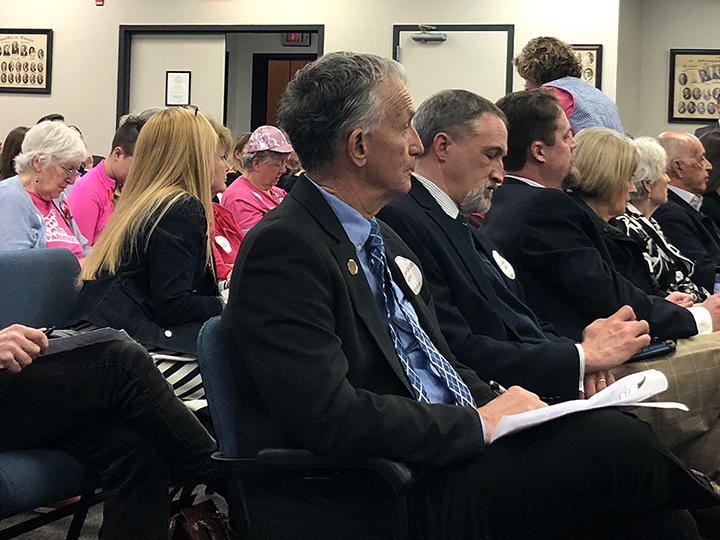 A crowd of spectators wearing pink or “personhood now” buttons to show their opinions on the bill attend a Senate committee meeting to discuss the rights of the unborn in South Carolina. 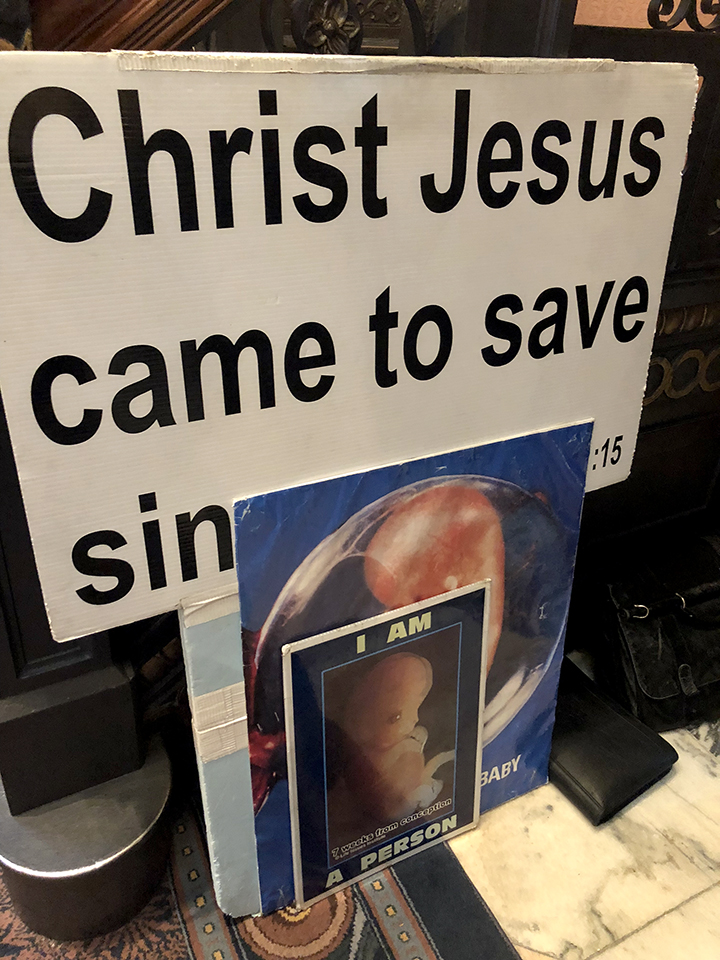 The Personhood Act of South Carolina would define the human life as beginning at the moment of fertilization, effectively outlawing abortion in the state.

The Personhood Act of South Carolina could give legal rights to human life from the moment of fertilization, effectively banning abortion in South Carolina.

But even those who strongly oppose abortion believe the measure is flawed and won’t likely survive scrutiny in the state Senate.

Senn abstained from voting to send the bill to the full Senate because she did not want to vote against a pro-life bill yet felt the personhood concept is unconstitutional.

“I’m in favor of incremental changes that could help the pro-life movement,” Senn said. “but not anything that just totally eviscerates Roe v. Wade and that we know we’re going to lose in court.”

Personhood is defined as the state of being a person, and as having human rights as defined by the law. The personhood bill currently before the legislature would give those rights  to an unborn fetus from the time of fertilization of the egg, a step before implantation.

The Republican-backed bill is headed to the South Carolina Senate after hours of debate and adoption of an amendment during a Senate Judiciary Committee meeting February 20.

The judiciary committee voted 12-9, along party lines, with one abstention, to send the bill to the full Senate.

The amendment added during the meeting gave exceptions to the bill including life threatening situations for the mother, contraception, and in vitro fertilization.  However, the amendment makes no concessions for victims of rape or incest.

Sen. Richard Cash, R-Anderson, a co-sponsor, made that clear when he answered a hypothetical question posed by Sen. Margie Bright Matthew, D-Colleton, about a 10- or 11-year-old child that has incest committed against her and gets pregnant.

“If a child is raped, yes, that’s a horrible act,” Cash said, referring to the 11-year-old in the hypothetical scenario. “But two wrongs don’t make a right.”

“You cannot erase the rape by killing the child, and the child is an innocent person,” Cash said, referring to the fetus which the personhood bill would give full Fifth and 14th Amendment rights.

The Fifth Amendment gives people the right to due process of law when accused of crimes. It also prevents self-incrimination and double jeopardy. The 14th Amendment secures those rights for people on the state level as well, meaning that no state can violate a person’s Fifth Amendment rights.

Cash said the bill would not outlaw hormonal birth control pills unless such a form of contraception were proven to prevent implantation of an already fertilized egg.

“I’ve had a Christian ob-gyn state that he doesn’t believe that ever happens,” Cash said.

Cash further explained the controversy in the medical community over the several ways in which the pill works, such as the thickening the uterine mucus so that sperm never reaches the egg. That method, Cash says, is not one which would be outlawed by the personhood bill.

“If something is proven to affect the human life after it has begun at the moment of fertilization, I think the state would have to take a look at that,” Cash said.

Ceren Farr, a pro-choice advocate who came to the hearing, says she still opposes the bill because it would outlaw certain types of birth control that do prevent implantation.

“I’m against making a fertilized egg a person because then I wouldn’t be able to use an IUD as birth control,” said Farr.

Johnny Gardner, director of a pro-life advocacy group, the Voice of the Unborn, has been lobbying for personhood in South Carolina for 27 years, and he says the bill’s progress makes it more palatable to those who are  opposed.

“I don’t like the idea of in vitro fertilization,” Gardner said. “but the bill has nothing to do with that.”

Senn,  the Charleston Republican, questioned how the bill affects doctors who provide in vitro fertilization services. If fertilization is considered the legal life threshold, what would happen to parents who no later wanted leftover fertilized eggs in storage?

“I think the result of this bill would be that there would have to be some legislation on in vitro,” Cash said after a line of questioning about the bill.

Cash used the example of the birth of a baby from an embryo frozen for 24 years.

“If it was not a human being, then how did it become a baby 25 years later?” Cash said.

Gardner also values that the amendment allows for pregnant women to seek medical help if their life is at risk.

“A few years ago, my pastor’s daughter was not able to go to full term,” Gardner said. “She might have been six months along when they had to remove the baby from her. This baby lived three days outside of the womb and they tried to save the baby, but the baby did die.”

“We don’t consider that murder. That was not an abortion,” Gardner said, referring to why the amendment adds an exception for women in life-threatening situations during pregnancy. Cash says that the main purpose of his personhood bill is to overturn the U.S. Supreme Court’s decision in Roe v. Wade, which made abortion legal in all 50 states.

“We are trying to challenge the Supreme Court on their fundamental error that the unborn human being is not a person,” said Cash.

Cash is not the first state legislator  to challenge Roe v. Wade. Just a week after the Supreme Court decision in 1973, a Maryland senator introduced a Human Life Amendment. The amendment was knocked down, but since then more than 330 versions have been proposed.

In 2013, North Dakota became the first state to pass a personhood amendment.  However, that amendment was not ratified by North Dakota voters in the 2014 election. Kansas and Missouri have passed personhood laws, but they do not supersede federal abortion laws in the manner that the SC personhood bill is meant to.

Sen. Kevin L. Johnson, D-Clarendon, said his concern with this bill is that it interferes with the private matters of families, like health and affordability, when it comes to children.

“I don’t know who we are to tell parents what they can and cannot do especially when the law of the land says that it’s legal,” said Johnson.

The personhood bill is headed to the Senate floor after being voted out of committee.

“Representative Greg Delleney told us that if we can get the Senate to pass the bill and send it to the House, he said ‘we’ll get it out of the house,’” said Gardner. Delleney, a Chester Republican, is chairman of the House Judiciary Committee.

“Meanwhile we’ve got other important business of the state.”