A prayer for rain and free trade in Holly Hill 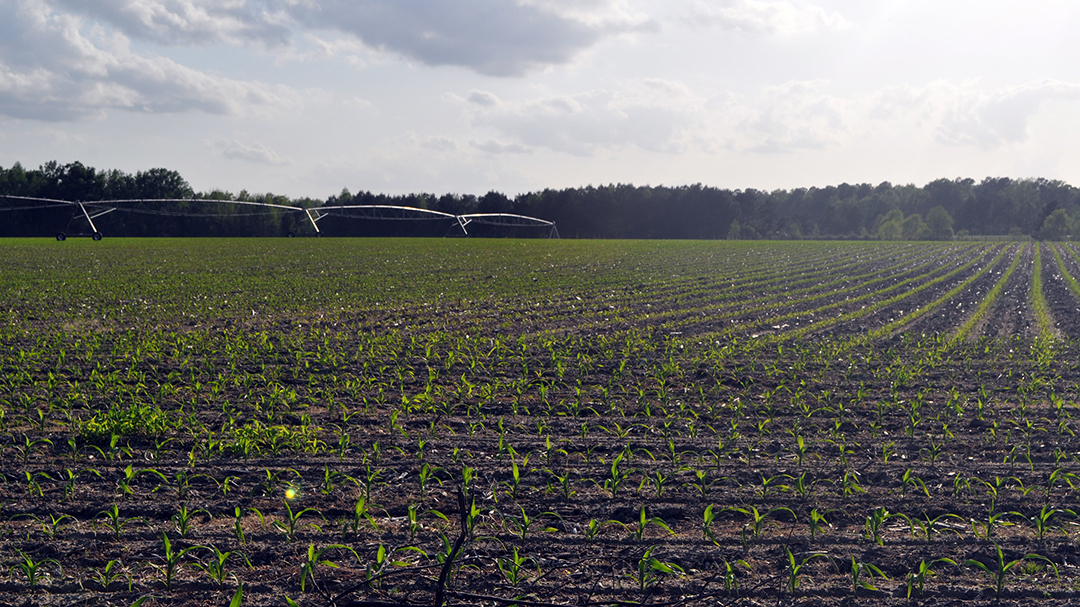 Corn, usually the most profitable crop grown at the Hutto family farm, takes up 1,300 to 1,400 of the farm’s 3,500 acres.  Despite recent tariffs raised by China, a key importer of American soybeans, Dean Hutto plans to go through with planting a full soybean crop as well. 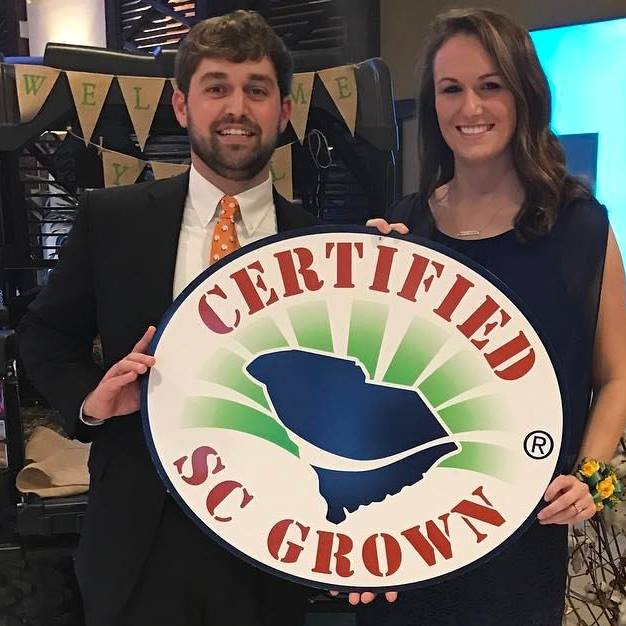 Pictured here with wife Sara, Dean Hutto is a member of the S.C. Department of Agriculture’s Soybean Board and vice president of the Orangeburg County Farm Bureau. Hutto represents the fifth generation in his family’s long line of farmers. 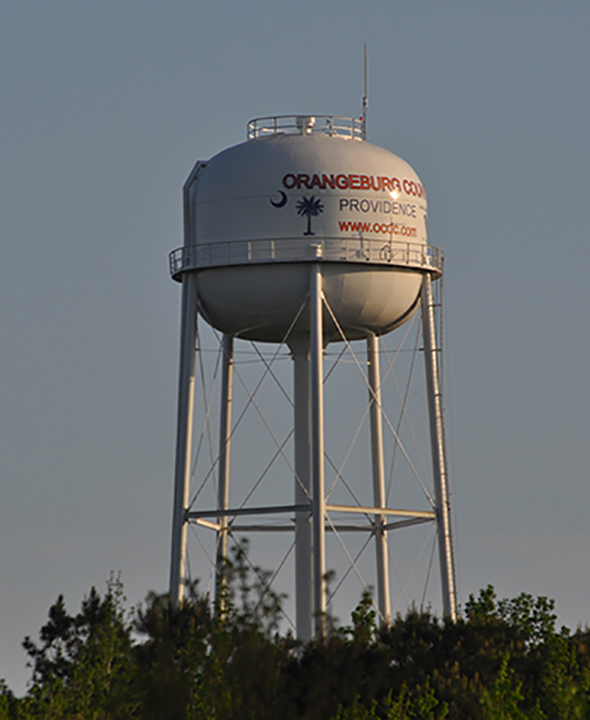 Hutto worries about the impact of tariffs on American crops and rural communities, including Providence, a crossroads community situated just north of the Hutto family farm in eastern Orangeburg County. 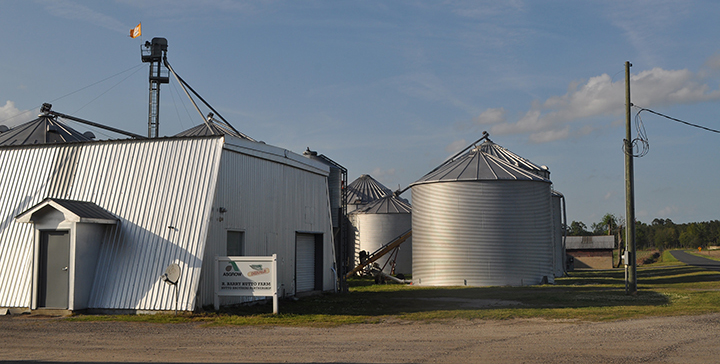 Hutto and his family raise Holstein steers for shipment to Midwestern feed lots, although their farm does not maintain a slaughterhouse. Beef was among the 128 American products on for which the Chinese government increased tariffs in early April. 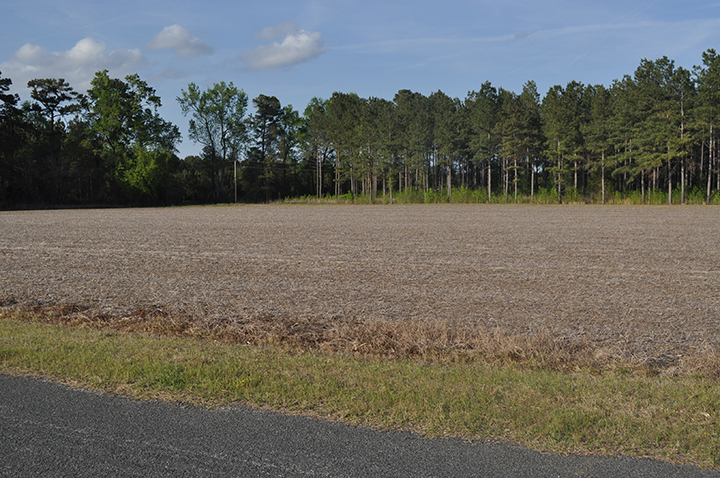 Hutto plans to seed this field for soybean production in late April. He plans to plant 900 to 1,000 acres despite Beijing’s tariffs. 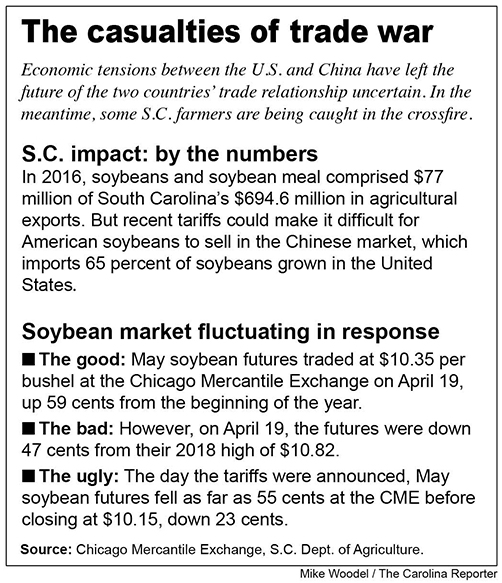 HOLLY HILL, S.C. – Outside the Exxon station a corncob’s throw from the R. Barry Hutto farm, a sign notes that the station and store sold a winning S.C. Education Lottery ticket sometime in the near past.

Just down Old State Road 20 miles southeast of Orangeburg, Dean Hutto – Barry’s son, and a fifth-generation farmer – worries he has lost the D.C. lottery without buying a ticket.

Because of Beijing’s recently-imposed tariffs on American exports and a budding trade war sparked by the Trump administration, two of Hutto’s crops could be acutely affected come harvest time this fall: cotton, which takes up 700 of the farm’s approximately 3,500 acres, and soybeans, which take 900 to 1,000, by Hutto’s count.

“I read a really good quote the other day that said, ‘There’s no winners in trade wars, only casualties,’” Hutto said, “’and the American farmer is the first casualty.'”

While the most profitable crop depends on weather and commodity prices, Hutto said year in and year out corn brings in the most income for the farm. But soybeans still comprise a decent chunk – about 20 to 25 percent.

“People don’t understand how something like that can affect farmers in a state like South Carolina,” Hutto said. “People just watch the news, read the headlines and see there’s a 25 percent tariff on, I think, it was 133 goods or whatever.”

“People take for granted, in my opinion, that farms make up 1 percent of the population, feed 100 percent of the world, basically. And when somebody takes 25 percent out of my pocket, in these rural communities that are all over South Carolina… that’s 25 percent less I have to spend at the hardware store or the parts store or the grocery store or whatever.”

Hutton, a Newberry graduate and lifelong family farm hand, says the farm has been in the family’s name since 1781. Holstein steers chomp from troughs, preparing to be shipped to Midwestern feed lots when they tip the scales at a half-ton. The corn fields are just beginning to show leaves as semis scream past them on I-95, which intersects with U.S. 176 between the Exxon station and the mouth of Hutto Market Road.

In the past, Hutto says, his family employed milk cows and owned a stockyard, but currently the farm produces mainly corn, soybeans, cotton and peanuts. This year, Hutto plans to plant 40 acres of bell peppers for the first time.

“People, in my opinion, society in general, the general public, go get a meal and they don’t ever think about where it came from,” Hutto said. “They don’t think about the fact that somebody’s livelihood depends on how much that was worth at market.”

South Carolina’s rural population has rapidly vanished, leaving a majority of the population well out of sight of farmland. Just 12.8 percent of residents lived in cities at the turn of the 20th century, but rural citizens comprised a minority of the state population by the end of the 1970s. The 2010 U.S. Census found that South Carolina was only the 34th most urbanized state in the nation, but barely one-third of the population remained outside urban areas.

South Carolina exported $77 million of soybeans and soybean meal in 2016, constituting just over 11 percent of state agricultural exports for that year, said Sally McKay, communications director for the S.C. Department of Agriculture.

China consumes more soybeans than any other nation and imports 65 percent of all soybeans exported from the United States. Hutto doesn’t know what countries his soybeans end up in, but he does know 100 percent of the soybeans he drives down to the port of Charleston each year go to East Asia.

Soybeans are traded at prices per bushel – in layman’s terms, 8 dry gallons or about 9.3 fluid. At the level of 13 percent moisture by weight prescribed for harvest by researchers at the University of Nebraska, each bushel of soybeans comes to 60 pounds.

In the 2016-17 market year, 3,113 containers containing 850 bushels of soybeans each left the state. About 3,100 containers have already been shipped this year, and McKay says the department expects 600 more to go out in the months ahead, bringing the state soybean export to about 3.15 million bushels in 2017-18.

“Any disruption to that market would negatively impact the [soybean] industry as a whole,” McKay said.

It stands probable that a disruption has already occurred. After opening the year at $9.78 per bushel, May soybean futures sold at the Chicago Mercantile Exchange rose steadily through January and February before peaking at a year-high $10.82 on March 2. Prices then fell modestly before dropping 24 cents on March 9, a day after President Trump signed tariffs on imported Chinese aluminum and steel.

On April 2, the day tariffs on soybeans and 127 other U.S. exports took effect, May soybean futures fell 10 cents to $10.35 in Chicago. The White House unveiled tariffs on 1,300 further Chinese products the following day, on which the market closed up at $10.38.

Though his soybean crop is not yet in the ground, Hutto is going forward with planting it in the last week of April regardless of market conditions. The timing of the tariff announcement leaves him and his family with little choice.

Every year, the type and amount of crops the farm will grow is planned in January or February. With over 1,000 acres of corn already sprouting and just weeks away from planting his other crops, Hutto is going through with the farm’s original plan for 2018.

“When something happens that late, it’s hard to adjust because I’ve already lined up my finances and stuff like that,” Hutto said. “For this year we’re gonna stick with the plan we made, see how it shakes out.”

Asked if the plan would have been changed had the tariffs been announced in the fall of 2017, Hutto says it’s certainly possible.

“It could’ve very well changed our plan,” said Hutto. “If we knew then it was definitely going to be 25 percent right out of my pocket… we’re talking about miniscule margins at where the prices were when we made the plan.

“I can’t say we wouldn’t have planted any,” said Hutto, adding that the logistics of harvesting so much of another crop would have made eliminating soybeans difficult. “But we’d have looked at it for sure. I might’ve planted more corn.”

But crop farmers like Hutto and his family are far from the only ones affected. Pork was among the 128 products on which China placed a tariff on this month –  in this case, a whopping 25 percent.

McKay said numbers for the state pork industry are difficult to compile as most S.C. pork farmers work on a contract basis. According to the U.S. Meat Export Federation (USMEF), China imported over $1 billion of U.S.-produced pork and pork variety meat in 2017, totaling nearly half a million metric tons.

Dan Halstrom, president and CEO of USMEF, expressed concern about the tariff in an April 2 news release, saying the federation hoped for a speedy reversal but also called for diversification of destinations for pork exports.

For now, the USMEF is hopeful that the industry might be buoyed by demand in Argentina, where American pork became eligible for trade for the first time in a quarter-century on April 13.

Hutto said he also sees the potential for a trickle-down effect if fewer crops are grown in expectation of continued tariffs in 2019. He hauls his own grain to Charleston, but trucking firms around the state haul the bulk of agricultural exports each year, which were valued at nearly $700 million in 2016.

“Just say there’s no soybeans grown in the state of South Carolina; that’s no soybeans that get hauled to whatever destination. So there’s a trucker that’s affected right there,” he said.

As far as the farm’s growing schedule for 2019, Hutto doesn’t know how next year’s plan will be affected if the tariff is still in place come January.

“Off the cuff, obviously whatever plan we make is dependent upon the market,” said Hutto, pointing to the large amount of American soybeans China imports each year.

“They’ve got to have that from somewhere. However many tons that is, they have to have that…. I feel like somebody, some country will fill the void. Well, whatever country fills the void, there’ll be another void created,” he said, “so hopefully our U.S. soybeans can fall into that market, wherever it is.

“So I hope it’s not affected at all, but it’s just like I hope it rains tomorrow. You never know.”