“A sign of the times:” S.C. experts weigh in on effects of this week’s pipe bomb threats 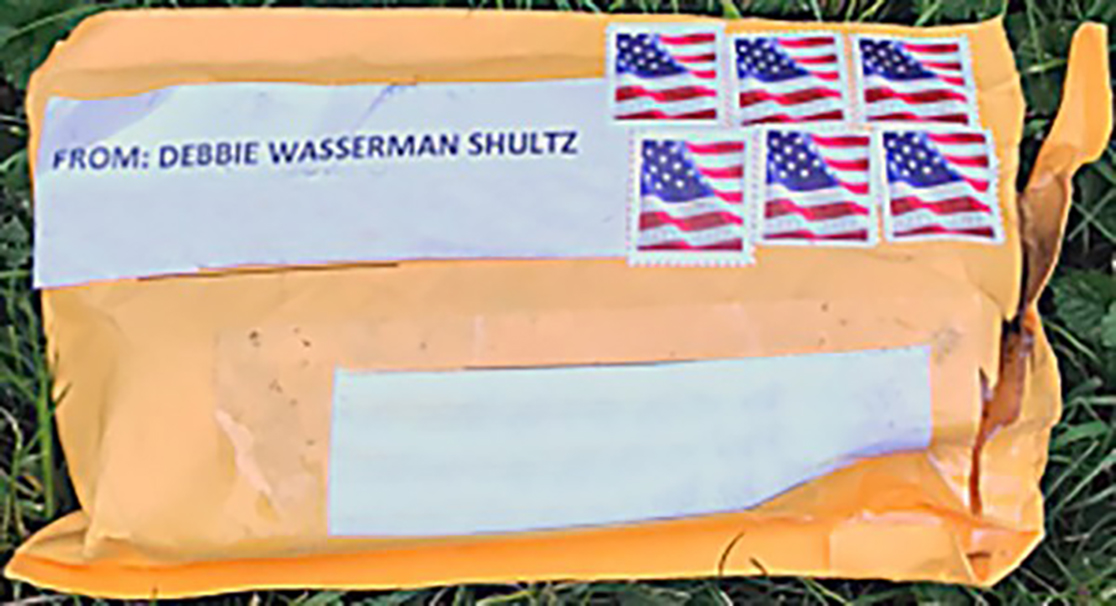 Just days until the midterm elections, several high-profile Democratic politicians, critics of President Trump and the CNN headquarters were the recipients of packages containing suspected pipe bombs. But for American voters, it’s just another day in the current tense political climate.

“Given where we are in the country, sending potentially threatening bombs — unless one of them goes off — isn’t really enough to move the election,” Shickre Sabbagha, director of student retention and political science instructor at Midlands Technical College, said. “It certainly is a sign of the times and it certainly can be used to point towards the incivility that is common in American culture.”

Beginning Monday, former Presidents Barack Obama and Bill Clinton, former Secretary of State Hillary Clinton, former Vice President Joe Biden, actor Robert De Niro, CIA Director John Brennan and others have been targeted with suspicious packages containing homemade bombs mailed by an unknown sender. As the list of recipients grows, it is clear that those under attack are rivals and critics of President Trump — a fact that’s putting Democratic politicians in all states on alert.

“The FBI has put out a general statement that everyone should be aware and examine mail that comes to them a little bit more closely, see if there’s anything suspicious about it and respond accordingly,” Don Wood, a supervisory special agent, chief division counsel and public affairs officer for the FBI in Columbia, said.

“If there is a package that is identified as suspicious in nature, number one, you don’t want to handle it anymore, you want to leave it where it is. You want to isolate and evacuate the area where the package is and then you want to call 911 and let first responders respond.”

Extra security measures aside, the immediate effects of the attacks so far are few. With the current state of politics in the U.S., voters are used to this kind of turmoil.

According to University of South Carolina political science professor Robert Oldendick, constituents are likely to see this incident as further motivation to stand by their parties. The likelihood of voters changing their minds due to an incident like this is slim, he said.

“The general response from politicians on both sides has been a call for unity, but people who are already opposed to the Republicans and the President are going to view it as the right’s fault, and that’s not going to change their vote,” Oldendick said. “The Republicans and the people that are supportive of the President are going to say that it’s a terrible thing but that the Right isn’t directly responsible, and it’s not going to change their votes.”

At a rally in Wisconsin following the first of the attacks on Wednesday, Trump broke from his usual habit of delivering inflammatory statements, encouraging “all sides to come together in peace and harmony” and condemning the threats. While an impact on the outcome of the midterm elections is improbable, this rare civility on the part of the President could demonstrate a different effect that the bomb threats could have on the American people — one of eventual unity between the right and left.

“We’ve been getting more and more divisive for a very long time and within the electorate we’ve reached an extreme level of polarization and at some point…there has to be a recognition that this is really broken,” Oldendick said.

“People don’t like the other side but when it comes to these physical types of attacks and potentially harming or even killing somebody, there’s a general recognition among a very large percentage of the population that the way our politics have become today — it’s just gone too far.” 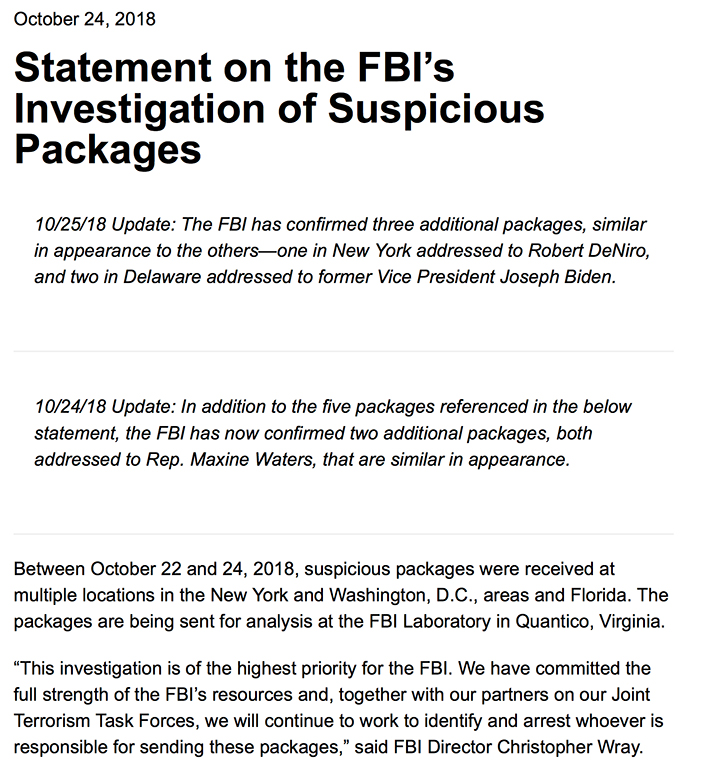 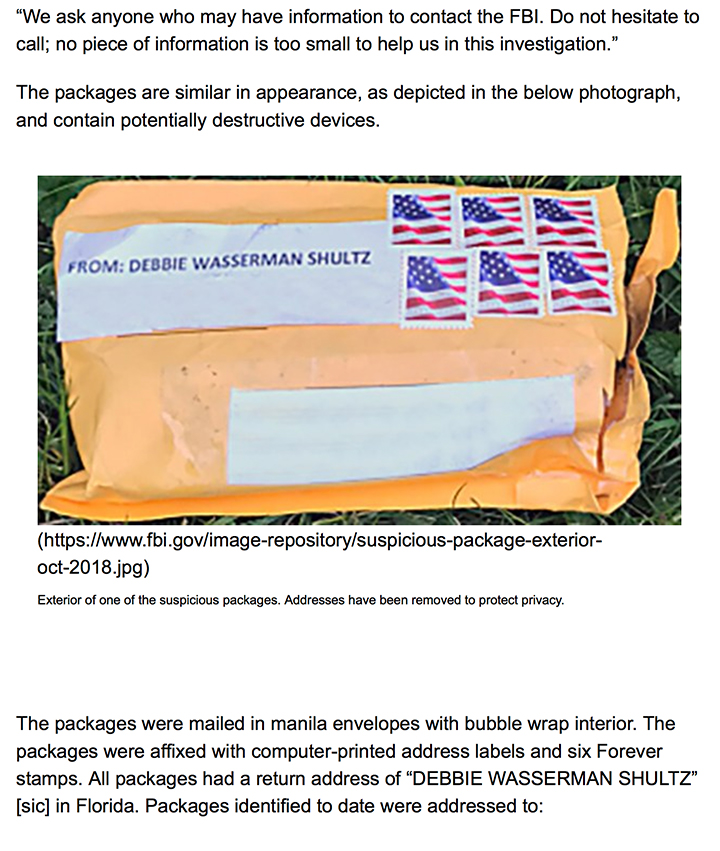 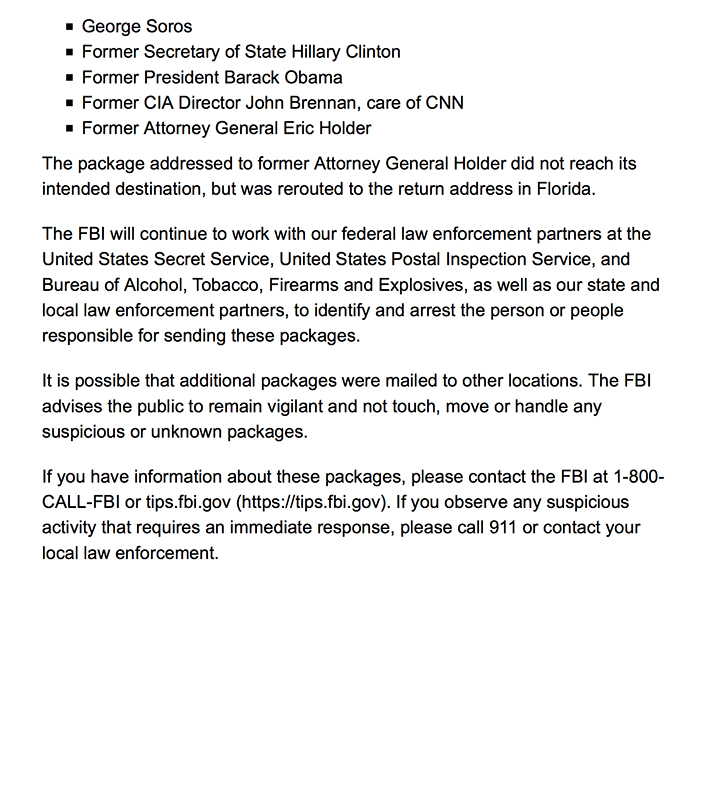 The FBI has issued a statement on their investigation of the suspicious packages as well as instructions to deal with any other potentially threatening packages.