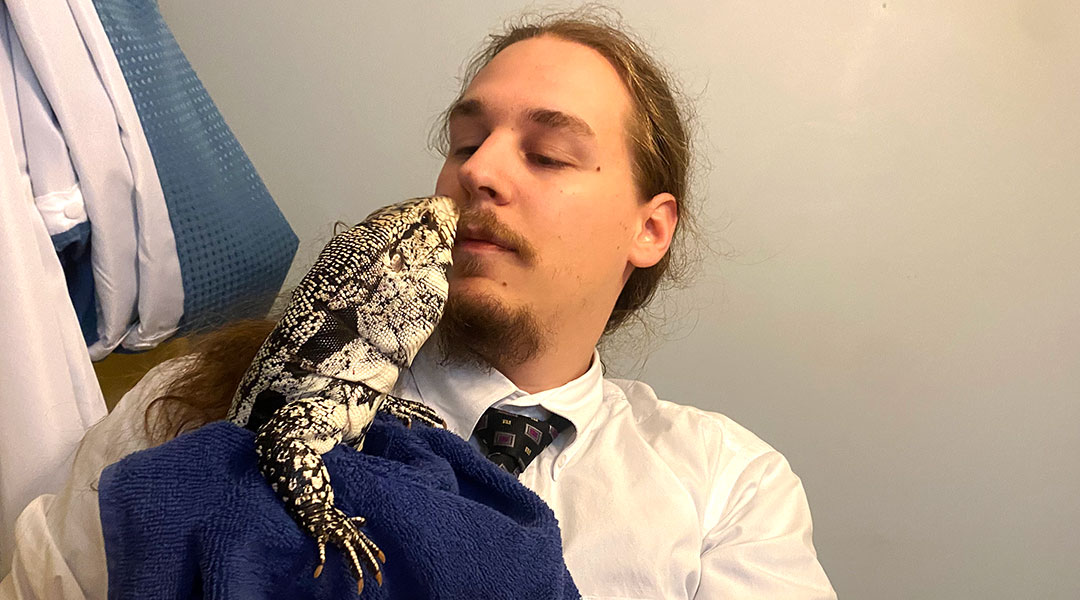 William Rish swaddles the tegu lizard he is fostering in a towel after giving him a bath. Tegu lizards are currently banned in the state. Photos by Anna Mock

A 3-foot long tegu lizard paddled in circles through a bathtub in Columbia one recent evening. William Rish, the lizard’s “foster dad,” offered the lizard a grape, and he nibbled on it. Rish rejoiced — this was the first time in about two weeks that the reptile had eaten.

Rish, a lizard enthusiast, got the call about a month ago from animal rescue organization Carolina Wildlife that there was a tegu lizard in need of a foster home. Since then, the tegu had taken up residence in Rish’s small upstairs bathroom, the only place in the house that could maintain the proper level of heat and humidity for the animal.

The reptile’s bathtub habitat was never intended to be permanent. But because the South Carolina Department of Natural Resources announced a ban on non-native Argentine black and white tegus in May, Rish had a hard time finding the lizard a new home. The ban states that no tegus can be brought across state lines, bred, sold or transferred.

“One of the reasons that I never moved anywhere was because South Carolina, you know, allowed for legal, proper ownership of a lot of species that I was interested in,” said Rish, a 24-year-old employee at a condo building. “But now I guess we’re deciding that we’re not going to do that.”

According to Andrew Grosse, herpetologist for SCDNR, 15 tegus have been reported in the state so far, many of them gaining attention through social media posts. Since the lizards have appeared, SCDNR announced that all current tegu owners must register their pets by Sept. 25.

Black and white tegu lizards (scientific name Tupinambis merianae) are local to South America and Argentina, but have become popular pets in the United States. They’re intelligent animals and can be very affectionate, which was true in Rish’s case. Males can exceed 4 feet in length while females average about 3 feet. When fed a healthy diet, they can live for around 20 years.

Grosse doesn’t see a problem with keeping tegus as pets, but takes issue with careless owners releasing them.

“All of these tegus that got out were either released or they escaped some enclosure that they were in. And so, being responsible with a pet that you have, whether it’s native or not, is really important,” Grosse said.

Rish also says that poor keepers are the problem, but doesn’t think that the ban is the right approach.

“I know tons of people who’ve called lawmakers to be like, ‘Hey, what you’re penalizing is not the issue.’ The issue is crappy keepers. And this is not how you stop them — this is just how you drive them further into being crappy keepers,” Rish said.

Wild tegus are a relatively new problem in South Carolina, with the first confirmed sighting being in August 2020. Tegus have already established themselves in other Southeastern areas such as Central and South Florida.

“I don’t really know what the impact of tegus is yet; I don’t think anybody knows yet, but they don’t want it to be what has become like Florida,” said Sean Foley, the curator of herpetology at Riverbanks Zoo.

After about a month of care, Rish was able to find a home last week for the tegu with a trusted friend from Georgia, where tegus are legal to own. He feels confident that the lizard is in good hands now, but his opposition to the ban remains.

“I think that the way that these laws are going, it’s not pushing you to do the right thing. If anything, it’s encouraging you to be very secretive and not find proper information, not put the effort in to make sure that your animal is living the best life it can,” Rish said. 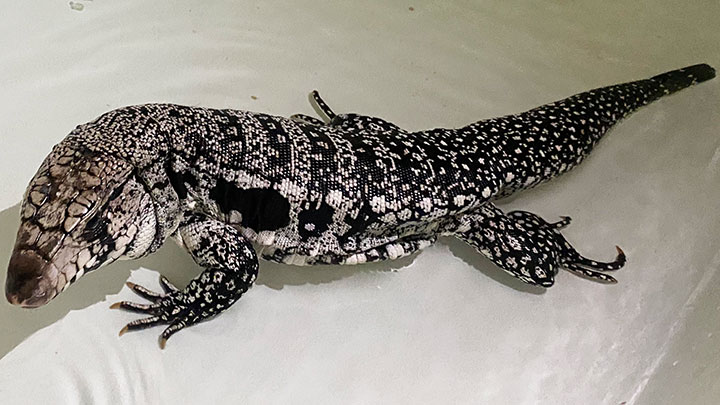 Rish’s tegu lizard swims in circles through the bathtub. He finds them to be great pets with lots of personality. 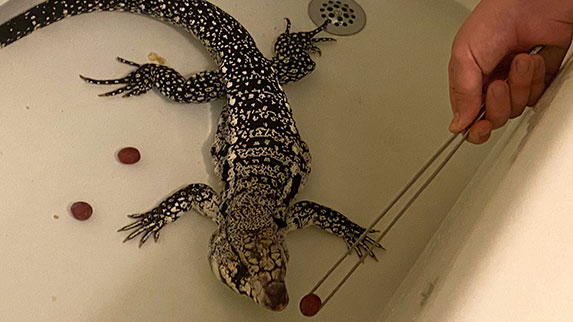 Rish holds out a grape for the tegu to eat. Fruits are a supplemental part of a tegu’s diet. 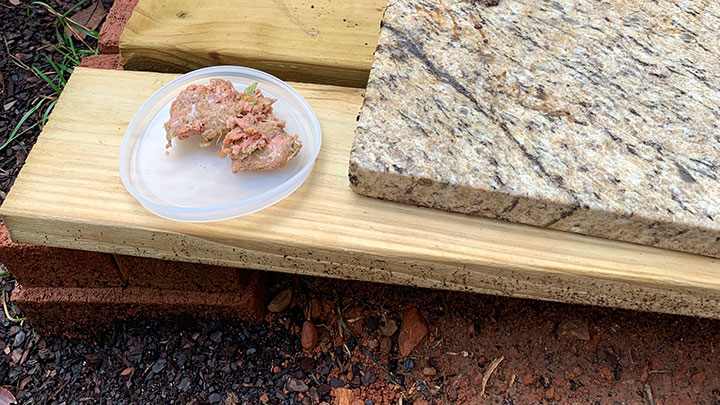 A plate of tegu food sits in an outdoor enclosure. According to Rish, this is a homemade blend that attempts to replicate the variety they’d find in nature. Photo courtesy of William Rish 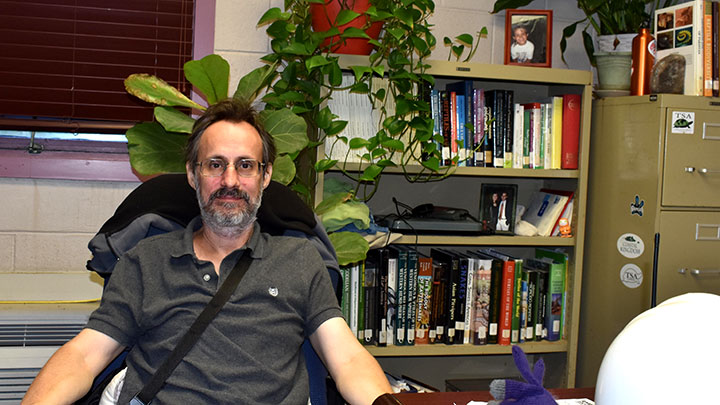 Sean Foley, curator of herpetology at Riverbanks Zoo, sits at his office desk. He is concerned with the impact of tegu lizards on local wildlife. 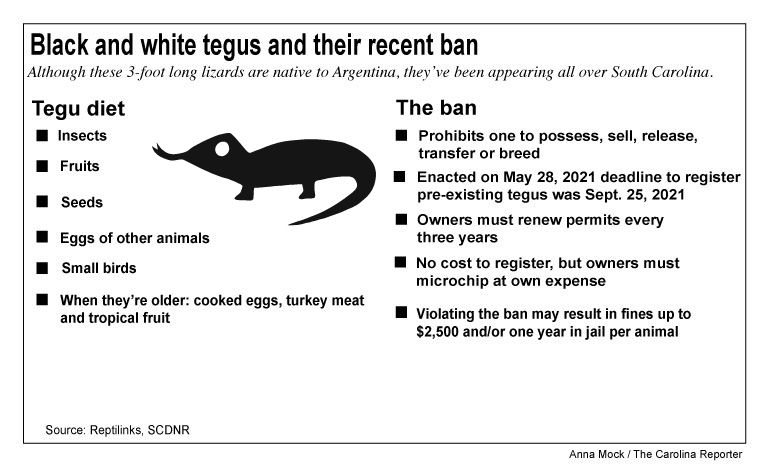