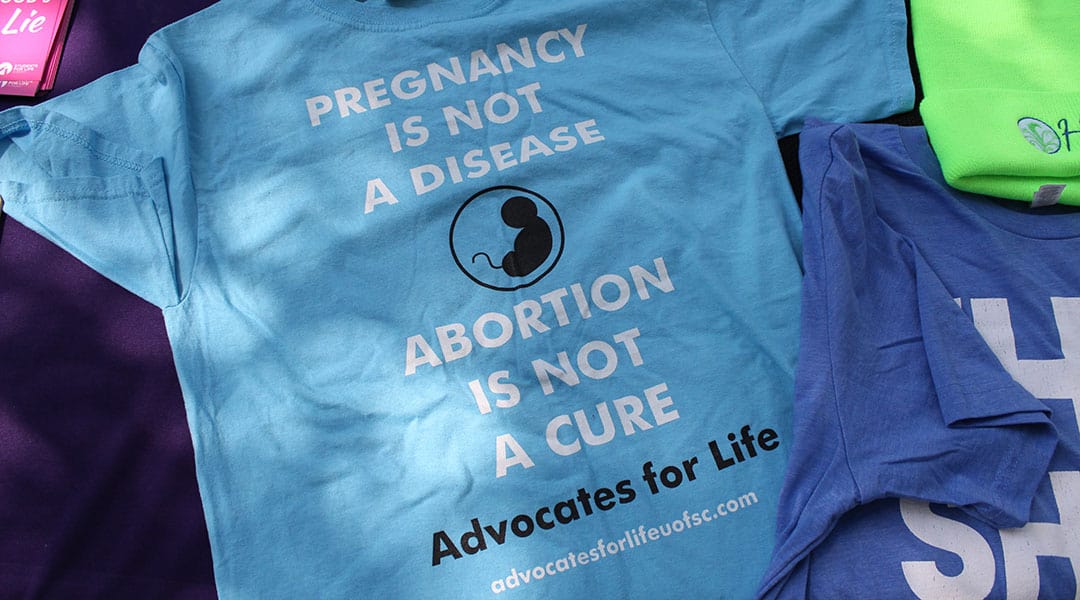 Advocates for Life encourages members to wear anti-abortion T-shirts to class on Thursdays to show public support for their cause.

Your shirt can say a lot about you. An appreciation for a certain color or pattern, a harmless joke, or even a statement about what you believe in.

The shirts made and worn by Advocates for Life, an anti-abortion University of South Carolina student organization, make a bold statement in their own way. Some of the shirts have “Pregnancy is not a disease. Abortion is not a cure” written on the front. Others are less direct, with a printed image of a fetus or the phrase “This Shirt Saves Lives.” The club encourages members to wear the shirts every Thursday to show their presence on campus and attract more members.

John Mark Porter, a 21-year-old accounting student at UofSC, is the executive coordinator of Advocates for Life and far from the stereotypical militant anti-abortion activist.

“As someone who believes life begins at conception, I believe it is killing a child to have an abortion, but I also understand that some people don’t really believe that life begins at conception,” Porter said. “I think they are wrong for thinking that, but I understand why, in thinking that, they would say it’s an invasion of privacy to prevent me from having a ‘medical procedure.’”

He said this fundamental disconnect can make a dialogue between both sides of the abortion debate difficult.

“We can’t just go and advocate for pro-life policies, we need to actually engage with people and tell them why that is life,” Porter said.

According to its mission statement, the group seeks to “peacefully inform our audience of the medical and moral repercussions of abortion and euthanasia while also avoiding antagonistic, abrasive, and unfruitful forms of discussion.” Advocates for Life started their T-shirt initiative last August for the start of the fall semester.

“We had a brainstorming summer where we had a lot of opportunities to be thinking of ways to activate the pro-life movement,” Porter said. “It’s easy to wear a shirt, but it’s not always easy for a college student to make a meeting at 6 o’clock in the evening.”

The shirts are only one part of the group’s more aggressive stance at the UofSC.

In November, the group is set to show the recently-released film Unplanned in Russell House. Unplanned is the story of a former Planned Parenthood worker who became an anti-abortion activist after witnessing an abortion. The controversial film was criticized for using graphic imagery and having a religious and political slant.

On Nov. 14, Advocates for Life is teaming up with Daybreak Ministries, a local crisis pregnancy center, to offer free STI and pregnancy tests out of the Daybreak van.

Crisis pregnancy centers are billed as the anti-aboriton movement’s alternative to women’s clinics like Planned Parenthood. They generally offer similar medical procedures, such as sonograms or pregnancy testing, but do not offer abortions and usually dissuade women from getting one. Some CPCs have been accused of using false advertising to lure women that would otherwise get an abortion.

Advocates for Life also regularly hosts an informational table on campus with anti-abortion literature and T-shirts. Although nearly 80% of college students in the U.S. believe abortion should be legal, the time and place could not be better for the organization.

“We are focusing on trying to normalize the pro-life movement,” Porter said. “We recognize that a lot of people on campus are pro-life, but they won’t necessarily be upfront about it because it’s not necessarily the most comfortable subject to talk about.”

The abortion issue in South Carolina is at a tumultuous crossroads. Legislation that would ban abortion after a fetal heartbeat is detected is currently caught in the Senate Medical Affairs Subcommittee after passing the State House of Representatives. Oct. 1 was the last day to submit written testimony to the subcommittee, meaning that a subcommittee vote on the bill could be imminent.

If the bill passes that subcommittee, it will be sent to the full Medical Affairs Committee and finally to the state Senate at the start of the next legislative session in 2020 where it will most likely pass. When the bill passed the House earlier this year, Gov.  McMaster promised to sign the bill if it comes to his desk, meaning that the outcome of the Medical Affairs Committee vote will be a major deciding factor in the fate of S.C.’s fetal heartbeat bill.

Porter, the anti-abortion advocate, testified in support of the bill and used his time to detail the more gruesome side of abortion.

“I’ve seen the trucks that come to haul away barrels of aborted children whose beating hearts were stopped as they were sucked out of their mothers’ wombs,” Porter said in front of the subcommittee while wearing the organization’s shirt.

Haley Borowy is a second-year student at UofSC and a South Carolina resident who is opposed to the heartbeat bill. She says the bill represents a government invasion into the rights and privacy of women in the state.

“I just think it is misguided,” Borowy said. “ I understand you want people to get less abortions, that’s a perfectly reasonable argument to have. I think comprehensive sex education is first, because then people will know how to have fewer unwanted pregnancies.”

As a member of the College Democrats executive board, Borowy has experience with Advocates for Life, which stages a debate with the College Democrats every year. Although she disagrees with them, Borowy said that students should be allowed to wear whatever message they want within reason, and she was not sure if other students would even care.

“I’ve seen a lot braver,” Borowy said in reference to the shirts. “I feel like when you are in college you just want to mind your own damn business and not bother anyone.”

The sequel debate between the College Democrats and Advocates for Life is scheduled for Nov. 21.

South Carolina is one of several states that have tried to pass fetal heartbeat bills that criminalize the administration of an abortion after a fetus’ heartbeat is detected. Generally, a fetal heartbeat can be detected after six weeks of pregnancy, which can be before a woman even knows she is pregnant. The sign of a heartbeat is an indicator of a healthy pregnancy, as 90% of fetuses that show a heartbeat make it to birth. Since around 60% of abortions occur after six weeks, the heartbeat bill is seen by pro-abortion rights activists as a severe restriction on the procedure.

The Advocates for Life set up a table on UofSC’s Davis Field Thursday to engage with the community. This display was one of the largest so far, featuring large posters decrying Roe v. Wade and a tapestry of connected baby onesies with anti-abortion messages written on the them.

Porter and other members of Advocates for Life manned the tables for most of the afternoon, passing out pamphlets and discussing the topic with passersby.

Hannah Seymour, a fellow anti-abortion activist, echoed some of Porter’s sentiments after a passing student heckled their table.

“Some people would rather contradict themselves than agree with someone else,” she said.

During the session, people of all opinions regarding the abortion issue approached the group for a comment.

Cox also noted that her impression of someone would change if she saw them with a anti-abortion T-shirt.

Luke Burdette, a second-year political science student, stopped at the table for nearly an hour to debate with Advocates for Life members. He equated the exercise to the Socratic method.

“It’s their job to make a claim, and it’s my job to dispute that claim,” Burdette said. “Ultimately, only good can come out of discussion.”

After the exchange, Porter explained his brief history with Burdette.

“Luke is a regular,” Porter said. “I enjoy talking to him, but I don’t want to take away from other conversations.”

Although the display did get some push back, most students who saw it simply put their heads down and kept walking.

After the hot afternoon at the display, Porter remarked at how the conversations can often end up going in circles.

“That’s the problem with being pro-choice,” he said. “They have to go through so much mental gymnastics to come to their conclusions.” 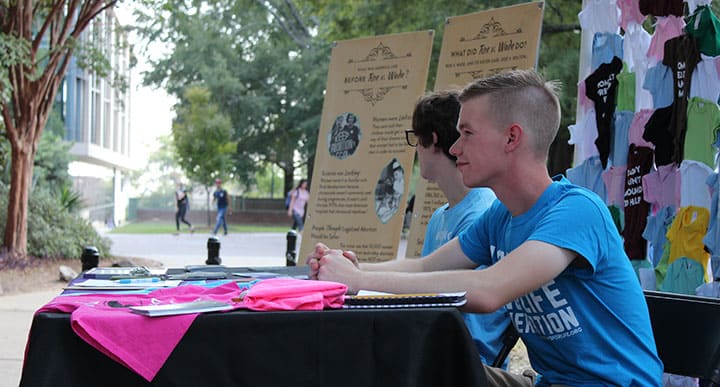 John Mark Porter is the executive coordinator with Advocates for Life, an anti-abortion student organization at UofSC, and devotes hours of his week as an activist. 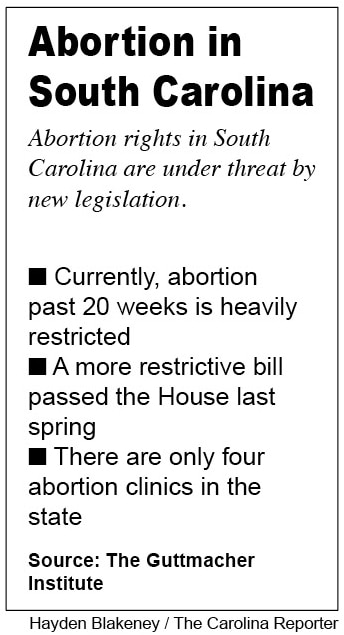 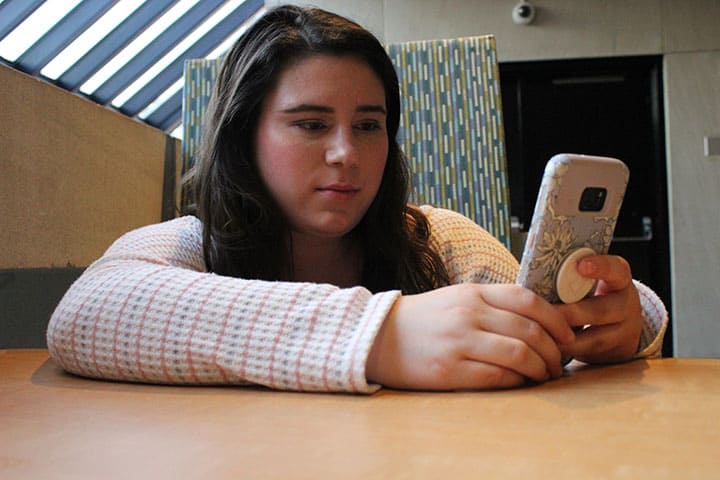 Haley Borowy is a abortion-rights student who does not support S.C.’s fetal heartbeat bill. She says it constitutes an invasion of privacy for women who seek an abortion. 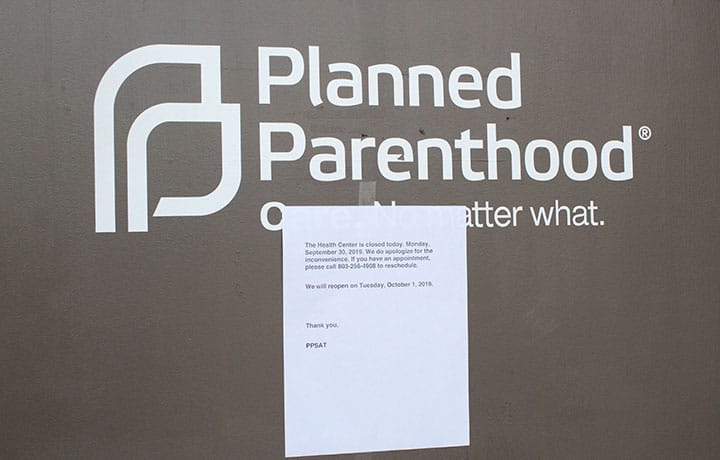 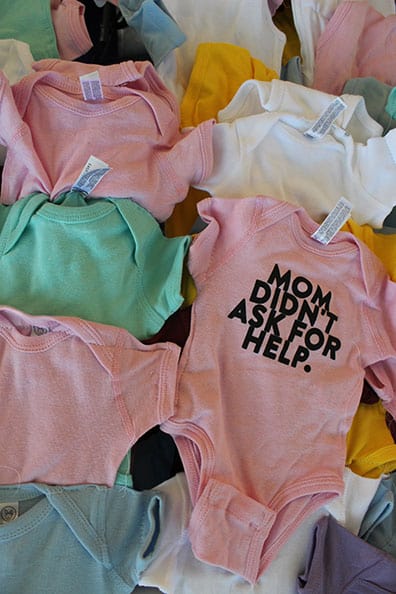 The Advocates for Life table included a tapestry of baby onesies sewn together with anti-abortion messages printed on the front.