At the forum, the ten candidates for Columbia City Council had many disagreements, but they all agreed on one thing- public safety is one of Columbia’s biggest issues.

Nine of ten candidates who are seeking to win a four-year term on Columbia City Council debated issues of public safety, economic development, and public services at a forum Tuesday.

The debate at the Richland County Public Library on Assembly Street, was sponsored by the Columbia Chamber of Commerce and took place a little more than a month before voters will cast their ballots in the Nov. 5 general municipal election.

“I think all of the ten candidates agree that public safety is the number one issue facing us. We have a police department that is down 80 slots,” he said said.

Duvall, who was first elected to city council in 2015, faces a trio of young competitors in his bid for re-election, including Dylan Gunnels, age 26, Sara Middleton, 27 and Amadeo Geere, 31. The at-large seat is a citywide vote.

Three of five council positions will be determined on the November ballot, including the at-large seat, District 2 seat, and District 3 seat.

Ed McDowell Jr., a former pastor, is seeking re-election in District 2, which is defined by historic African-American neighborhoods in the northern and central areas of the city. McDowell faces two challengers, including Catherine Fleming Bruce, a media consultant, activist, and author, and Anna Fonseca, a resident of the Governor’s Hill neighborhood in Columbia.

In District 3, incumbent Moe Baddourah will be challenged by John Loveday, the 34-year old principal of S.C Whitmore School, an online charter school, and 38-year old Will Brennan, who is the owner of Brennan Works design and construction company. Baddourah was the only candidate who was not present.

In the debate’s opening remarks, Mark James, the chair of the Columbia Chamber Public Policy Committee, expressed Baddourah’s regrets for not being able to attend.

All three candidates challenging Duvall for the at-large seat are running for office for the first time, and each agreed that change was needed for Columbia to increase economic development.

“We need to start supporting small businesses rather than putting red tape on them,” Geere said.

The problem starts with taxes, according to Middleton. “Until we fix that problem, economic development and investors won’t come into the city,” she said.

Bruce said that her biggest motivation for running for office was the Allen-Benedict Court public housing crisis which left two dead and 411 residents displaced after a dangerous gas leak in January.

Housing is one of the many public services that is lagging in Columbia, which falls under a broader category of ‘equal access’ services. Equal access is a general term to describe public transportation, infrastructure, food insecurity, and safe and affordable housing.

The candidates want to speed up the response time for city services, such as water and trash and recycling. Loveday referred to a recent story where the city failed to replace his broken trash can for three months.

“It’s no wonder why we struggle with different areas that are more complex. We have to get our services right,” he said. 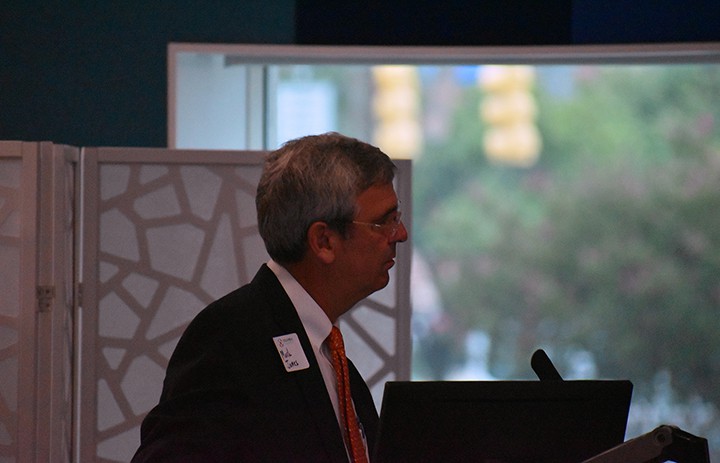 Mark James, the chair of the Columbia Chamber Public Policy Committee, was the moderator of the issues forum. 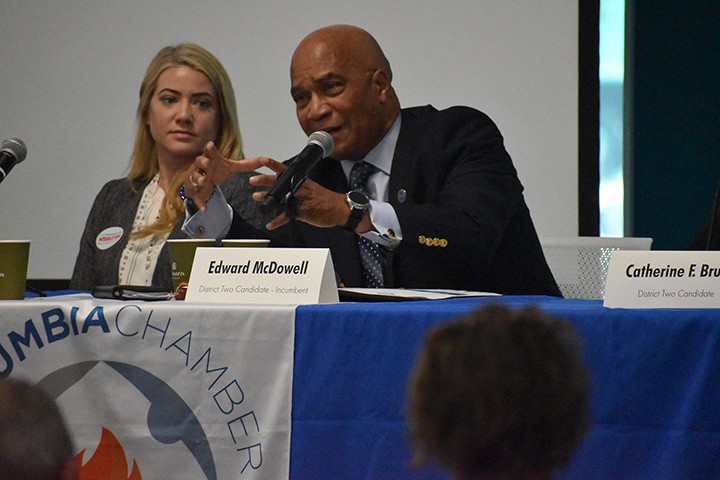 Ed McDowell Jr., right, was a preacher before first being elected to city council in 2016. McDowell lives in the Historic Waverly neighborhood, which is located in Columbia’s District 2. 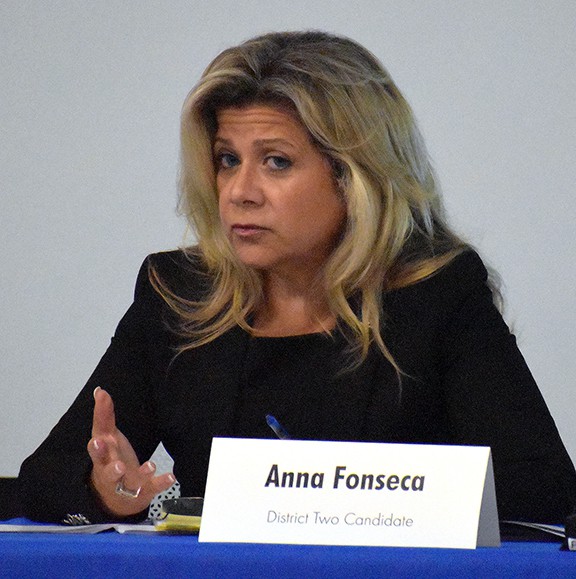 Anna Fonseca, a resident of the Governer’s Hill neighborhood in Columbia, is running against incumbent Ed McDowell Jr. and activist Catherine Fleming Bruce for the second district city council seat.