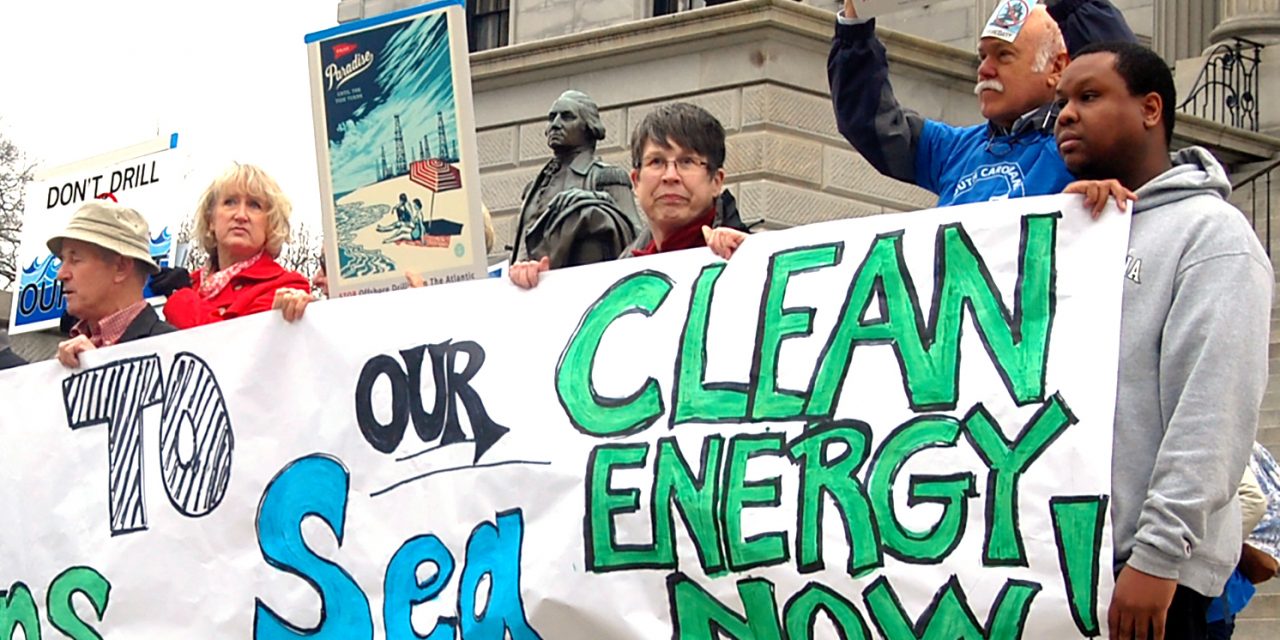 Environmental concerns and the impact an oil spill would have on tourism- a billion-dollar industry in South Carolina- could have due to offshore drilling were the main concerns raised at the rally. 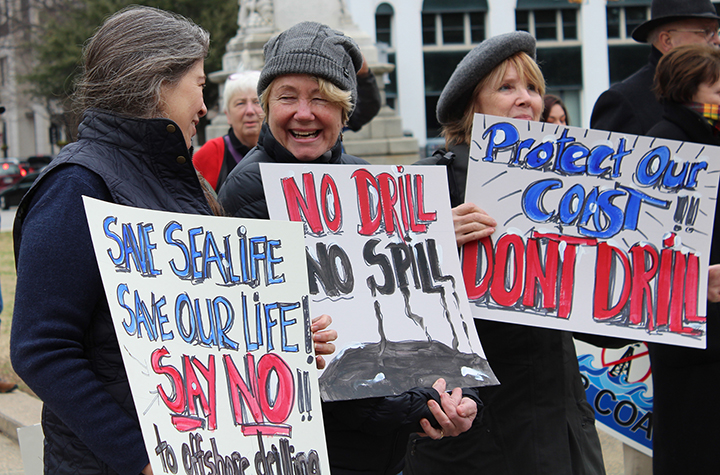 Over 200 people from all areas of the state came to the rally, many with their own homemade protest signs to convince S.C. legislatures to oppose offshore drilling. 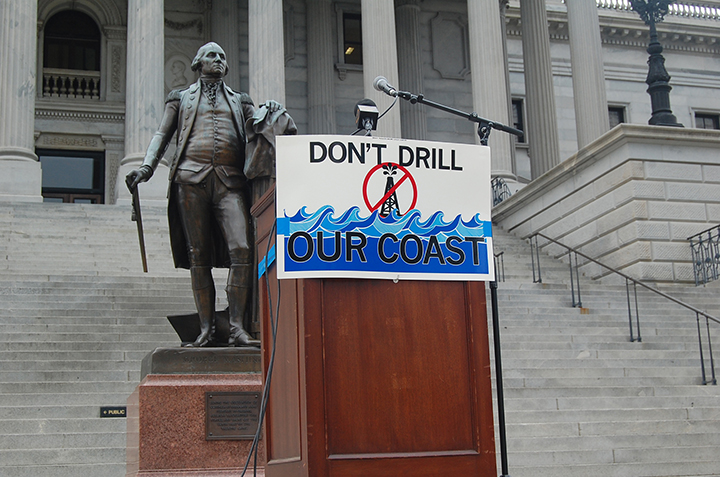 The Trump Administration’s plans to open most of the U.S. coast to offshore drilling has been met with fierce protest from many coastal residents, such as those gathered at Tuesday’s rally at the Statehouse in Columbia. 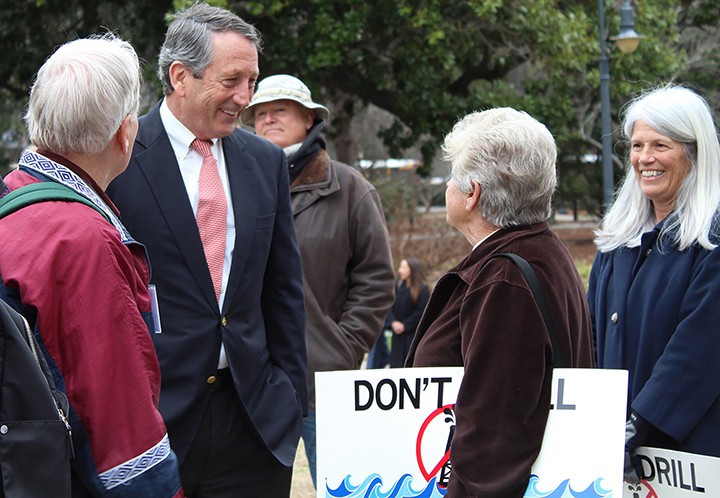 Former governor and Rep. Mark Sanford, who has advocated against offshore drilling, spoke at the rally on Tuesday. 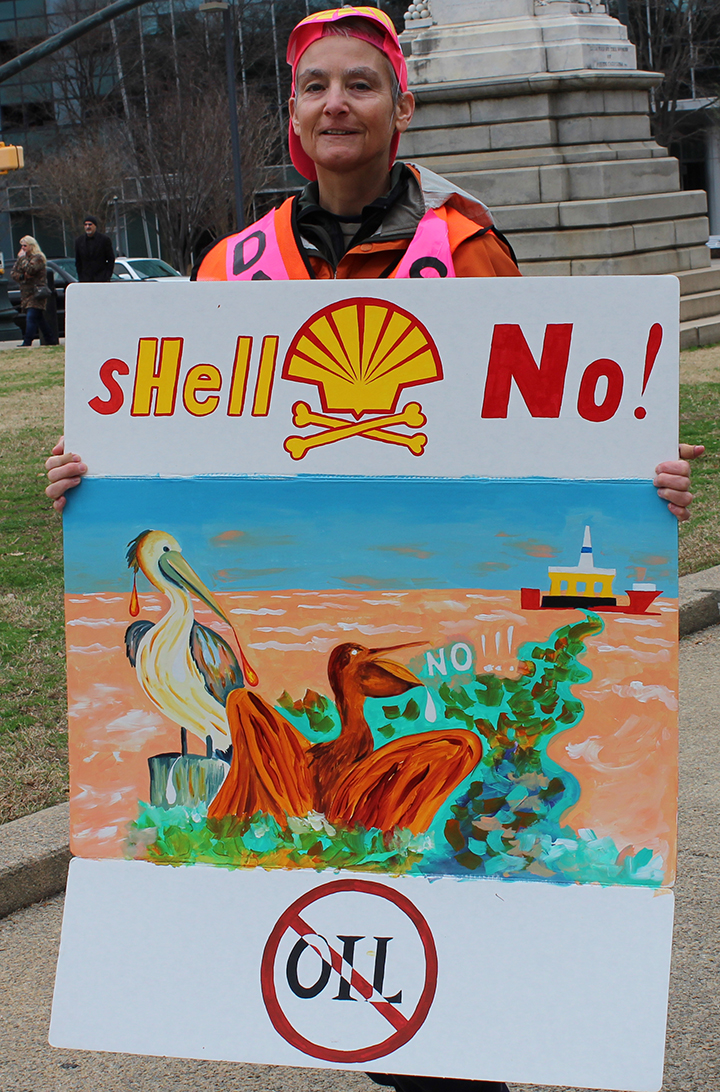 Mitzi Simmons, an ocean environmental advocate, attended the rally with a sign she painted herself. She spoke about the David vs. Goliath aspect of protesting oil companies over environmental concerns.

Former Gov. Mark Sanford evoked the prospect of dirty oil rigs off the South Carolina coast Tuesday as he rallied about 200 supporters of a ban on offshore drilling.

“If you can’t see an oil rig from the window in Mar-a-Lago, should you see one from a window at Pawleys Island?” said Sanford, now the state’s first district congressman.

The crowd responded with an overwhelming “No!”

The rally was held in response to a decision made by the Trump administration in January that opened billions of acres in the majority of the coastal United States, including areas of the Arctic, to offshore drilling. Sanford’s comment on Mar-a-Lago referenced the fact that Florida, where Trump has his winter White House, has received an exemption from offshore drilling plans.

The push to allow offshore drilling off the coast of South Carolina has been met with intense opposition from environmental groups, some local businesses and some politicians, including Gov. Henry McMaster. Early on, Florida Gov. Rick Scott vowed to seek — and got — an exemption for his state, citing the need to protect the state’s natural resources and lucrative tourism industry.

Tuesday’s rally was organized by co-founder of Don’t Drill Lowcountry, Alice Morrisey, and other environmental organizations.

Over 200 people attended the rally, which began at 11 a.m. on Tuesday. Local Columbia residents and people from across the state — some who traveled on buses organized for the event — were in attendance.

Representatives from the Webe Gullah Geechee Anointed People, including Chieftess and Head-of-State of the Gullah/Geechee Nation Queen Quet, were in attendance, along with Democrat and Republican representatives.

Some people dressed up for the event in dolphin and lobster hats.  Many were carrying homemade signs that read, “Don’t drill our coast.”

Mitzi Simmons of Folly Beach brought a homemade sign and said she wanted to raise awareness of the issue.

“I show up and try to get the word out about how important our oceans are and that we need to protect them,” Simmons said.

Simmons has been involved in anti-offshore drilling movements before, and not just in South Carolina.

“I used to live in Seattle, and in Seattle they were trying to put up a Shell oil rig, and we had an activist group that got kayaks and went out and protested this giant oil rig and won,” she recalled. “We got this drill to go down in Seattle.  And that really spurred me about the David vs. Goliath story, we can really make a difference.”

Speakers painted a grim portrait of a polluted coastline. Oil spills have disastrous environmental consequences and can severely affect the lives and activities of coastal citizens.

South Carolina’s Lowcountry is especially impacted by the ways of coastal living. Shrimping and fishing are big businesses in the state. Coastal tourism accounts for about $8.96 billion in South Carolina’s economy and has generated 99,325 jobs according to the S.C. Department of Natural Resources. Those statistics climb higher every year as the state’s coastal industries continue to grow.

While offshore drilling could create hundreds of jobs and help bolster South Carolina’s economic growth, those present at the rally believe that the risks of offshore drilling outweigh the rewards. McMaster has not stated yet whether legal action will be taken by the state to prevent offshore drilling from happening.