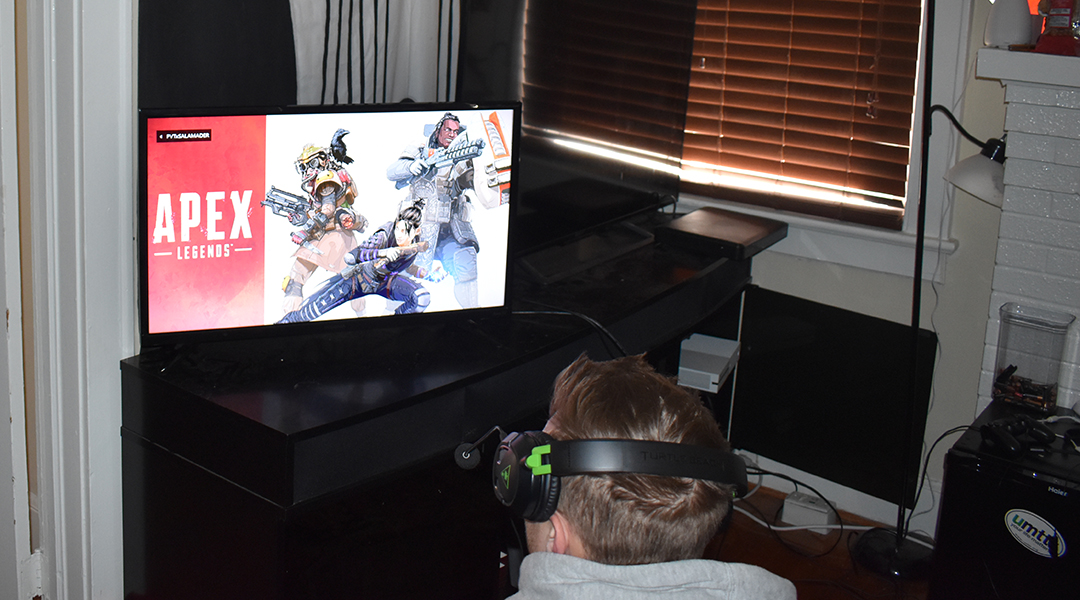 Justin Fendrick, Apex Legends player and investor, fires up his Xbox One, looking to outlive his opponents in team play mode.

When Justin Fendrick picked up his controller to play the new Apex Legends, he was skeptical it could top the excitement of Fornite, the most popular free-to-play game on the planet. But he then realized he could be playing the next game that could take over Fornite’s industry dominance.

“It’s the best game ever, my roommates and I are all over it and even invested,” said Fendrick, a University of South Carolina senior who became aware of the success of Apex Legends through his roommate, an avid gamer.

Fendrick decided to invest 10 shares into EA Sports, which is up 6 percent since the Apex Legends release.

EA Sports’ Apex Legends seems to be more than just hype. The battle-royale-inspired video game has officially broken Fortnite’s record for the fastest game to reach 10 million players, it did so in only 72 hours.

Since its release on Feb. 4, Apex Legends has signed up 25 million users.

“We got to a point where we felt some magic. We knew it would be risky to take the franchise in this direction, to go free play and do a surprise launch,” said Vince Zampella, who is the co-founder of Apex Legends’ developer Respawn Entertainment,  in an official EA blog post Monday.

Fornite is a battle royale game where players drop into a mapped location and try to outlast 99 other opponents. Although player’s characters might look different, there is no difference in abilities. Each player can build structures, and must also outpace a storm that damages their health every second. Players can play in teams of one, two or four.

Apex Legends is a bit different. The eight characters, or legends, have different abilities and the game is set in a Titanfall universe. There are multiple weapons placed around the map for players to collect. Players can only play on a team of three, and there are only 60 players total in each game.

The success of Apex Legends comes at an opportune time for Electronic Arts Inc., as it reported its worst decline in more than a decade, with its stock falling about 13 percent according to Market Watch.

This is why people are getting positive on $EA — #ApexLegends is not just having a strong launch, it's having a significantly better launch than the most successful game in recent history. pic.twitter.com/4vANqkHJ5k

The most successful game in recent history, Fornite currently sits at 200 million players. Apex Legends had more success in its first three days than Fortnite did in its first two weeks of being released.

Known professional gamers such as Tyler “Ninja” Blevins have picked up on the Apex Legends hype. Ninja, known to be one of the top Fortnite players in the world, recently finished first place in his first ever Apex Legends tournament.

“I think it’s going to be nearly impossible for anyone to do what Fortnite has done,” Blevins said during one of his daily live-streams.

Nothing is out of the realm of possibility, Fortnite has done a lot to preserve its dominance in the video game world since its release. They update the game daily with new map locations, weapons, dance moves or “emotes” for characters, and even allowed superstar DJ Marshmello to perform live during game-play.

There is no denying Fornite’s effect on the gaming world. It has brought professional gaming to a whole other level. Apex Legends is on the rise, and although it may not take Fortnite’s throne, its initial numbers are on pace to be set even more records. 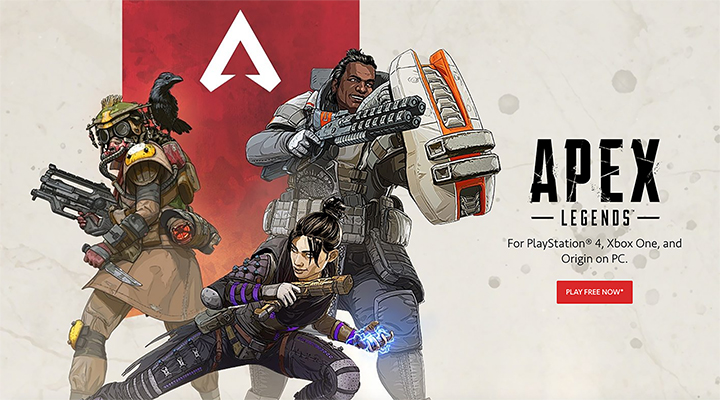 The new Apex Legends game is on pace to potentially rival Fortnite with 25 million players in just over 72 hours. 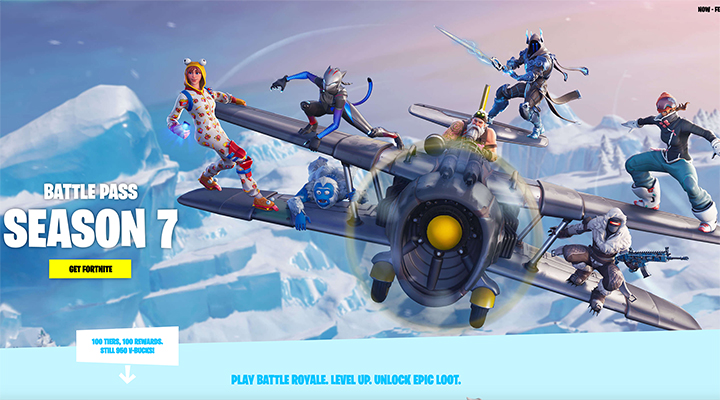 Fortnite is free to players on all compatible game platforms. The company’s revenue is generated from players buying character outfits and emotes, while Apex Legends allowed players to buy virtual items such as weapons and player abilities. 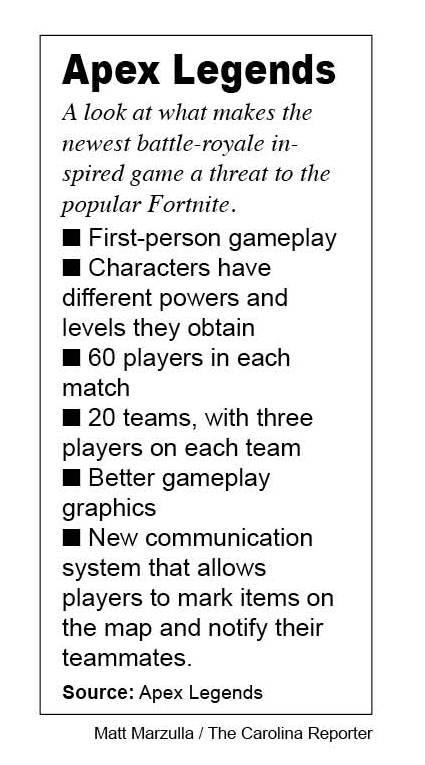 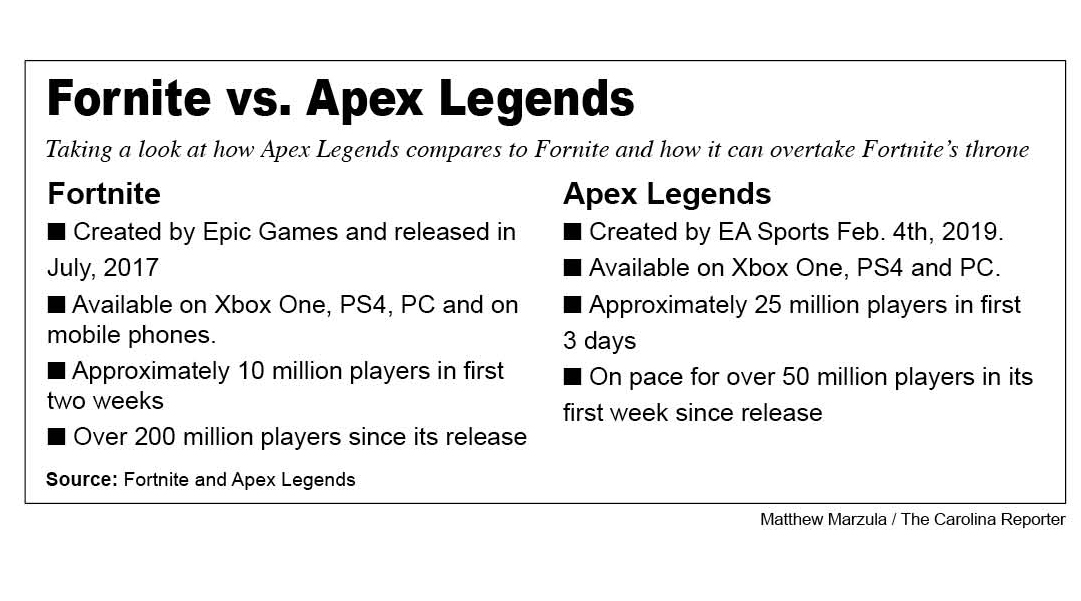