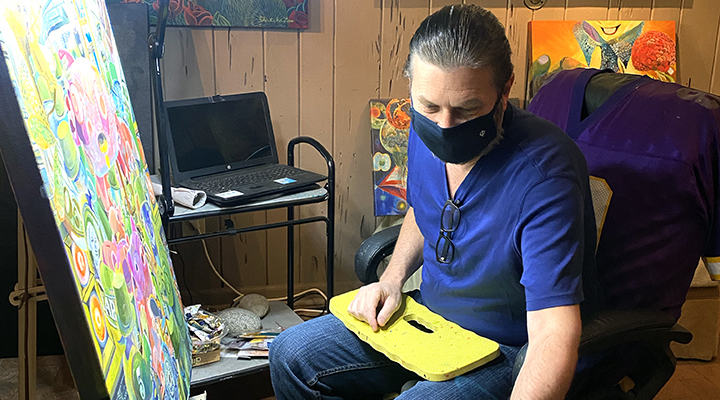 He is a Navy veteran who has modeled in Paris and worked over 20 years in the food industry as a chef. Now Christopher Lane is a full-time artist with one message he hopes to convey with his artwork: unity.

The artist’s upcoming exhibition, “United We Stand,” opens Nov. 6 at Rob Shaw Gallery in West Columbia, from 5 p.m. to 9 p.m. The exhibition runs through Nov. 30.

“United We Stand” revolves around the theme of unity within humankind, one that transcends gender, political views, religious views or ethnicity. Lane acknowledges the pitfalls individuals experience due to division, especially in today’s chaotic political environment.

“I want to teach people that we have each other, Democratic or Republican,” Lane said.

Each painting consists of bright colors and life-like scenarios, often illustrated in a surreal fashion. Lane uses the paintings in this exhibition to show the corruption in today’s world that divides society. He hopes that despite one’s ideology, his work will show there is an option not to participate in such division.

“I’m just like, maybe we should just stop and think before saying something,” Lane said. “That person that you want to call a name, that’s a parent or that person believes in what they’re saying. Try to empathize and flip it.”

Lane’s work is derived from the undeniable division consistently seen in the United States.

The artist, 51, began drawing in notebooks as a young boy as a distraction in class. Diagnosed with dyslexia, he found art to be a relaxing and calm outlet, allowing him to tell stories through painting rather than through the difficulty of words.

Originally from Minnesota, Lane grew up in a military household. His father served in three wars. As a boy, he lived in Egypt for six years but takes pride in growing up in Kansas City. Lane had his first piece of artwork showcased when he was 19 years old. The artist pursued an art degree at Eastern New Mexico University.

Before he decided to call his exhibition “United We Stand,” he had thought of tagging it “Divided We Fall.”

“‘Divided We Fall’ is negative,” Lane said. “If  I’m going to paint and if  I’m going to have my stuff out in public, I want to say something positive. I want to make you think. I don’t have the solutions, but maybe I can stop you for a second.”

Pieces in his exhibition show issues in the economy, fears of a dictatorship and rumors of war.

His goal with this exhibition is to make individuals realize the importance of unity, despite differences, in order to avoid conflict.

“My point is, if you’re a Trump person and you look at me and call me a name or something, I don’t care. If you’re a super liberal and say something like I’m being too nice, I don’t care,” Lane said. “If we don’t watch each other’s backs, either we’re gonna get invaded or bombed again.”

Lane’s overall inspiration in his artwork often comes from his admiration for his father who raised him with an understanding of respect and unity for all.

“He was the nicest man in the world,” Lane said. “He took his tenth-grade education and ended up being vice president of a multi-national corporation. He could have had a Mercedes. He could have had Armani. But he just had a shirt and a couple pairs of shoes and a car that worked.”

“He saved his money. He died in 1994 and saved enough money to pay my mom’s bills and leave money left over. The last meal she ate, he paid for. That was my dad, that’s what a man is to me. ”

“Christopher’s heart is truly reflected through his art,” McVety said. “His paintings are magnificent, visual stories and his desire is that they impact everyone in a very positive way. His dedication to his craft is born of an obligation he feels to improve this world for all humanity.”

Lane doesn’t want his upcoming exhibition to degrade America. He wants it to unite the country he loves.

“I love this place, and I know America is messed up,” Lane said. “But I don’t want America to be great again because that means it wasn’t great for someone else.” 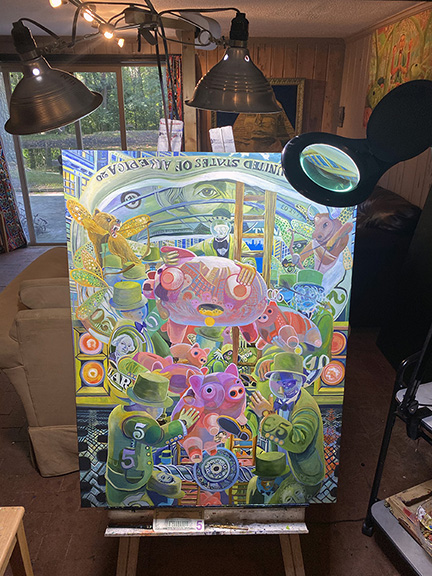 Christopher Lane’s final piece to be added to his upcoming exhibition, “United We Stand.” 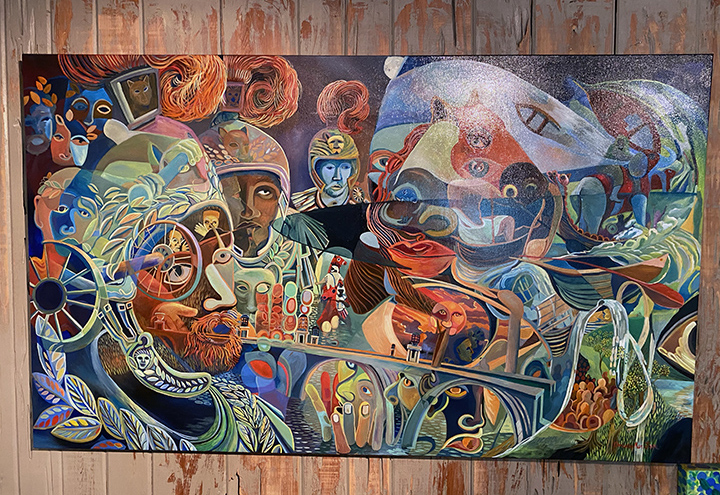 Lane doesn’t particularly like naming his artwork, but this piece is titled “Rumor of War.” Photo credit: Hallie Hayes 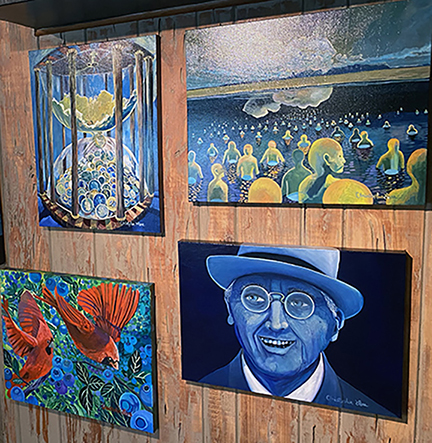 Lane will showcase a variety of different paintings in his exhibition “United We Stand,” including a painting of FDR. Photo credit: Hallie Hayes 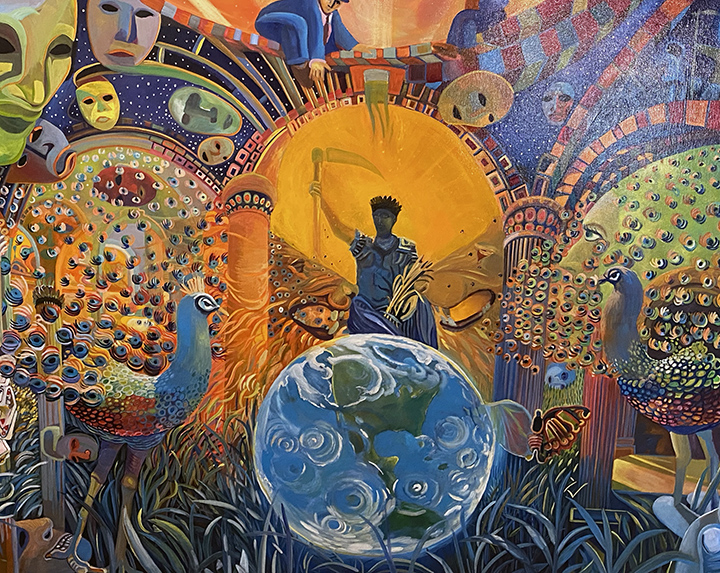 This image came from the idea of what a country with a dictator would look like to Lane. Photo credit: Hallie Hayes