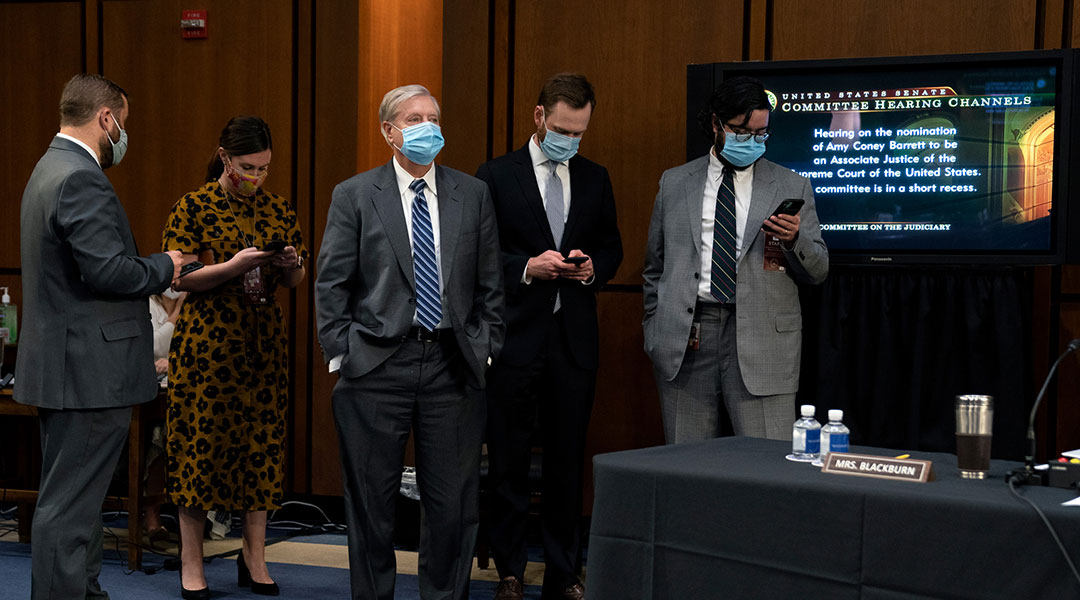 As chairman of the Senate Judiciary Committee, Sen. Lindsey Graham, R-S.C., plays a vital role in her confirmation hearing and has emphasized South Carolina’s conservative values during questioning this week. The three-term senator is also shoring up his own base as he battles Democrat Jaime Harrison in a tough re-election.

For Graham, Barrett mirrors South Carolina conservative values as the female legal antithesis of the late Associate Justice Ruth Bader Ginsburg, whose death on Sept. 18 ignited a rush by Republicans to nominate a conservative justice before the November election.

It’s difficult to predict exactly how Barrett will rule until she is confirmed on the bench but conservatives believe her addition would make the Roberts court the most conservative court since the New Deal era.

Donna Gottschall, the president of the South Carolina Federation of Republican Women, says the Senate and President Trump are just following through with their promise to cement a conservative court.

With 27 active chapters in South Carolina, The Federation of Republican Women is a group that helps bring the ideas of Republican women to lawmakers. She traveled to Washington with other members to show support for Barrett.

Gottschall and other conservative voters across the state connected with Barrett on her traditional values, especially her views on Roe v. Wade. She called it ‘barbaric’ in an ad that she signed and did not see it as ‘super-precedent’.

“We do believe that abortion is murder and it’s not just getting rid of a fetus that is not viable. We think it is a child. It is a person. And she agrees in that but she would be very fair in her arbitration in how she dealt with that,” Gottschall explained. “We are also looking forward to her dealing with Roe v. Wade again and looking at that and bringing that to light. But all of those things are up to her, we just have to see what she has done so far. We can’t put anything on her. That is her job is to be fair about it.”

Beverly Owensby, another member of the South Carolina Federation of Republican Women, found Barrett to be well qualified and likable as a mother, wife and judge. They also look towards her previous decisions on the 7th U.S. Circuit Court to showcase her fairness and interpretation of the law.

“Why would women not everywhere want to uphold a very successful, highly intelligent female who has had many accomplishments in her life and has a family, a huge family?” Owensby said. “I think everyone in America should be applauding Judge Barrett.”

If confirmed, Barrett will be up against major cases appearing in the Supreme Court as early as November. One of these takes a look at the Affordable Care Act passed under the Obama administration. That ruling could hurt many South Carolinians if overturned by the Supreme Court.

“There are people who rely on this coverage to protect them and their families, but it’s also that we are in the middle of a global pandemic,” Courtney Thomas, director of communications for the S.C. Women’s Rights and Empowerment Network, said. “And if the Affordable Care Act was to be struck down, that would mean over 2 million South Carolinians with pre-existing conditions could face higher health costs with zero benefits.”

The nonprofit advocates for women and girls in the state. A large amount of their time goes towards research on a wide variety of issues, including a lack of women represented in leadership roles. Barrett’s nomination adds female representation to the high court, but her originalist views of the U.S. Constitution alarms some Democrats and progressives.

“We already live in a state where it is already difficult to receive reproductive care,” Thomas said. “But I would hate to see what would happen if the Affordable Care Act were shut down.”

Senate Republicans most likely have enough votes to confirm Barrett to the Supreme Court, Jessica Schoenherr, a political science professor at the University of South Carolina, said.

The hearings give the public the chance to learn more about Barrett’s former rulings in the 7th U.S. Circuit Court and her legal philosophy, which closely resemble the late Justice Antonin Scalia.

“They have been talking a lot about her circuit court decisions, but the circuit court is very much bound by the Supreme Court decisions,” Schoenherr said. “Whereas a lot of the time the cases that make their way up to the Supreme Court are cases that nobody else can answer, and sometimes there are things that a judge hasn’t always had to think about.”

Barrett continues to follow the precedent of the ‘Ginsburg rule’ of not answering hypothetical questions during the hearing, Schoenherr said. Senators can showcase their state’s views and voting records through questioning, something that Graham has taken advantage of.

WREN encourages South Carolinians to reach out to their senators prior to the vote scheduled on Oct. 22 to voice their opinions.

“I think a lot of people are intimidated by advocacy because it seems so scary or it seems so important or that smarter people do. That’s not it at all,” Thomas said. “Everyone has a place in our democracy.” 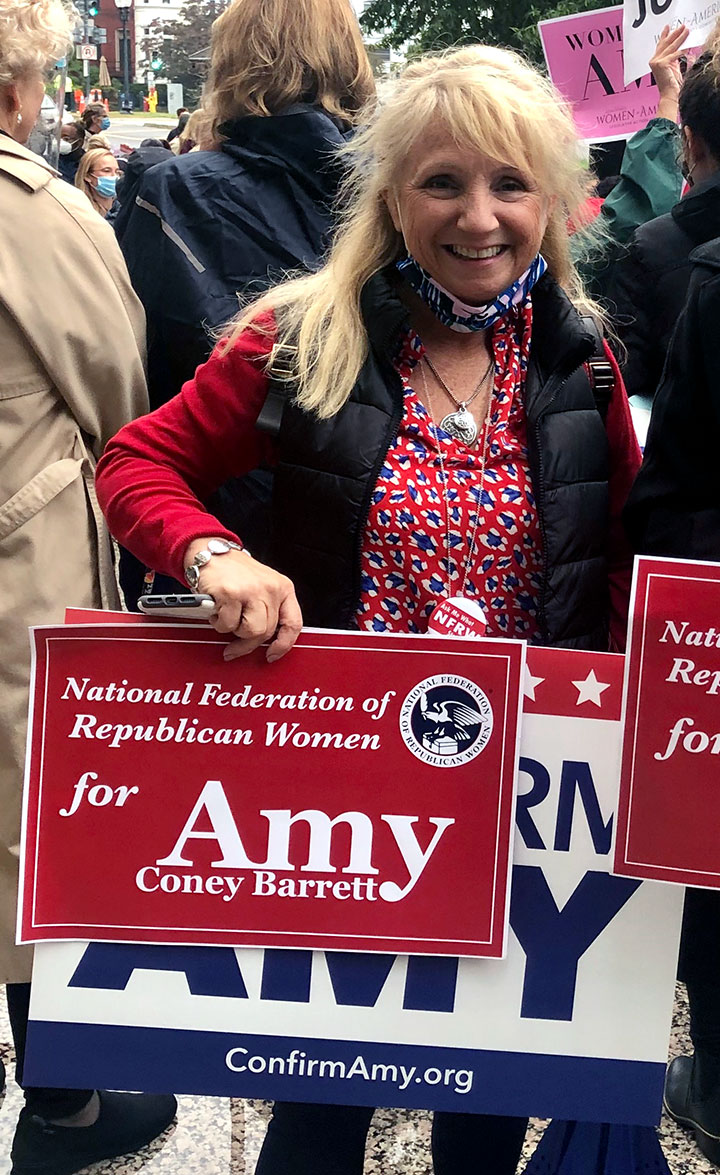 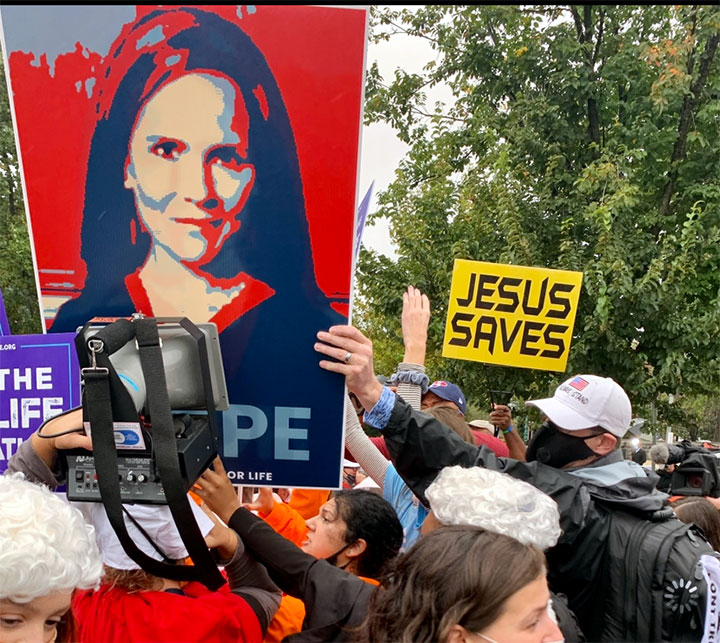 Republican Federation of Women, Heritage Foundation and other pro-life groups gather together in D.C. to support the nomination of Amy Coney Barrett during her confirmation hearings Tuesday. Photo Credit: Donna Gottschell. 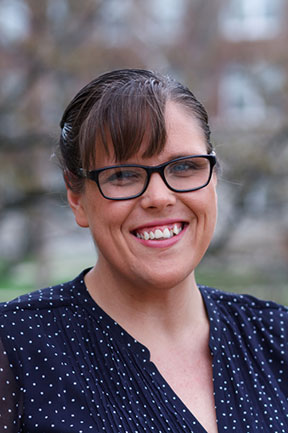