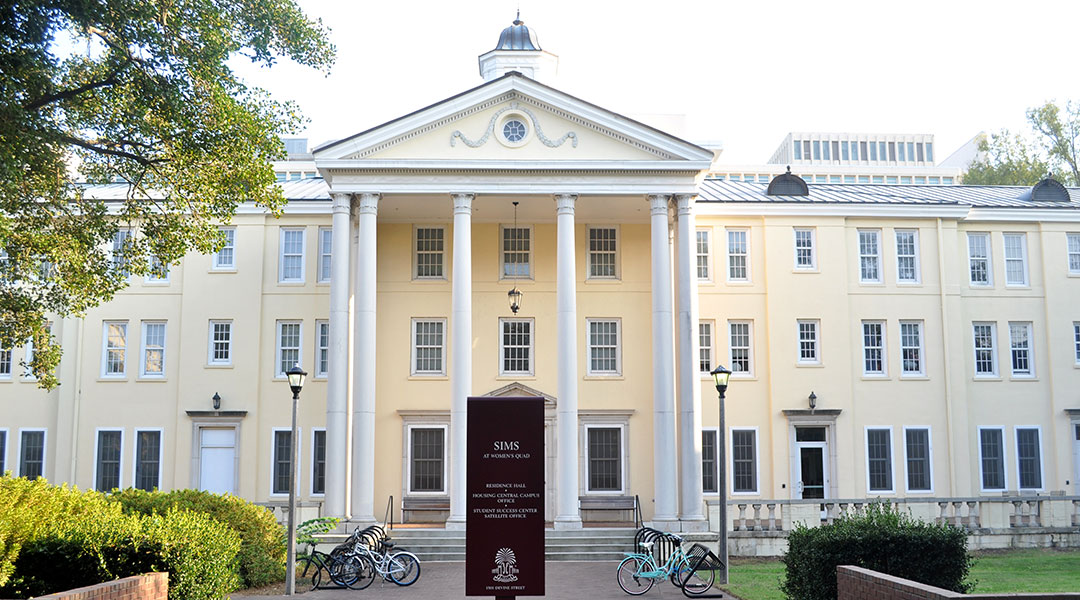 Sims at Women’s Quad is named after James Marion Sims, a physician who operated on enslaved women without anesthesia. A USC student started an online petition in June to rename the dorm after several students spoke out against its controversial name.

The University of South Carolina is moving forward with its historical campus review and the renaming of buildings that bear names of men with ties to slavery and segregation.

Among those who attended was USC graduate student Jazmyne McCrae, who set the tone for the conversation.

“When I said ‘forever to thee’ for the first time, I was blind to the history of racism and hate that was sanctioned and celebrated on this campus,” McCrae said.

The ongoing conversation about UofSC’s history isn’t a new one. It started with what we know today as the heart of UofSC’s campus, the historic Horseshoe.

“Several years ago, we had a group of students who wanted to see a more inclusive telling of the university’s history. Everything from the Horseshoe wall to the slave quarters behind the  president’s house,” said Jeff Stensland, UofSC’s director of public relations, who has been at UofSC since 2013. “This has been an ongoing conversation for a long time. Generally, how we tell the university’s history and the building names are certainly apart of that.”

In June, students called for the renaming of Sims at Women’s Quad and Strom Thurmond Fitness Center, arguing that the buildings honored a 19th-century physician steeped in racism and a 20th century politician who once filibustered against civil rights.

After the police killing of George Floyd in May, many states across the U.S. saw protests from people supporting the Black Lives Matter Movement. The protests sparked debates about removing confederate monuments and buildings honoring men with connections to racism and slavery.

Dr. James Marion Sims, known as the ‘father of modern gynecology,’ operated on enslaved black women without anesthesia.  The late U.S. Sen. Strom Thurmond ran for president in 1948 at the top of the “Dixiecrat” ticket and was known for his segregationist views and his 24-hour filibuster against the Civil Rights Act of 1957. Thurmond, the longest-serving senator, moderated his racist views and served in the Senate until his death in 2003.

“For years, students have been blindly going to a building named after a segregationist and a racist,” McCrae said, speaking on the Strom Thurmond Wellness and Fitness Center. She also recommended other buildings for the commission to review, like Wade Hampton at Women’s Quad, Thomas Cooper Library, Russell House and Longstreet Theatre.

Bobby Donaldson, Professor of Civil Rights History, noted in an interview other aspects of the university’s past, like the role it played in destroying black neighborhoods to expand its campus.

“So if you go to the Greek village, the Koger Center and Colonial [Life] Arena, you have no idea that that was a black neighborhood,” Donaldson said. “Our campus played a role in the removal of those black people, and those black homes, and those black churches.”

Donaldson said it’s important that our university does “a serious analysis of our previous history and begin to revise it,” a statement that reflects one of the commission’s duties.

“Really, it’s a task of looking at what names are currently there, researching those names and identifying any issues with them in their history,” said university archivist and co-chair Elizabeth West. “So, you could look at just about any building on campus that has a name and consider who is it named for and is that something that needs to be looked at more deeply, more carefully.”

West said the commission is looking forward to public input from the Carolina community on name recommendations and suggestions. Anyone is welcome to submit comments on the commission’s website. For more information, visit their website https://sc.edu/about/our_history/presidential_commission.php 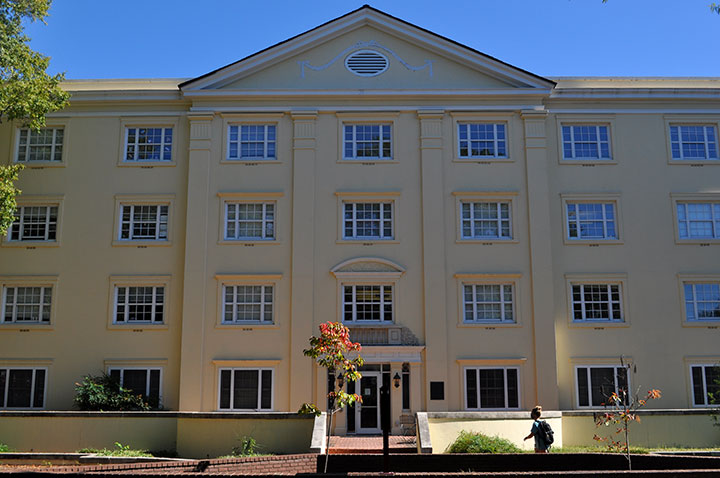 Wade Hampton at Women’s Quad is named after Confederate general and slave-owner, Wade Hampton III, who graduated from South Carolina College in 1836. The dorm was constructed in 1924 as the first women’s dorm at USC. 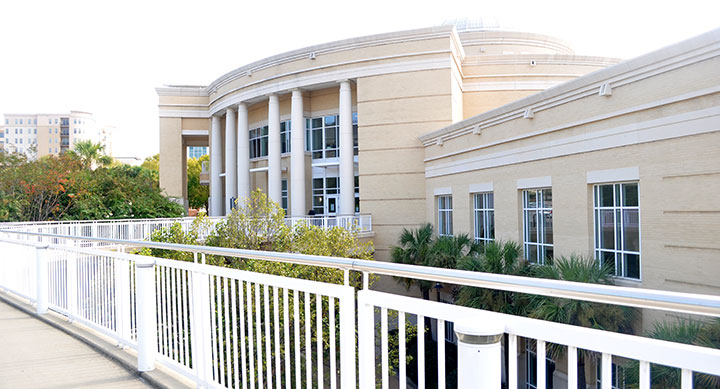 Strom Thurmond Wellness and Fitness Center is named after Strom Thurmond, late U.S. Senator from South Carolina who ran for president in 1948 as a Dixiecrat candidate that supported racial segregation. 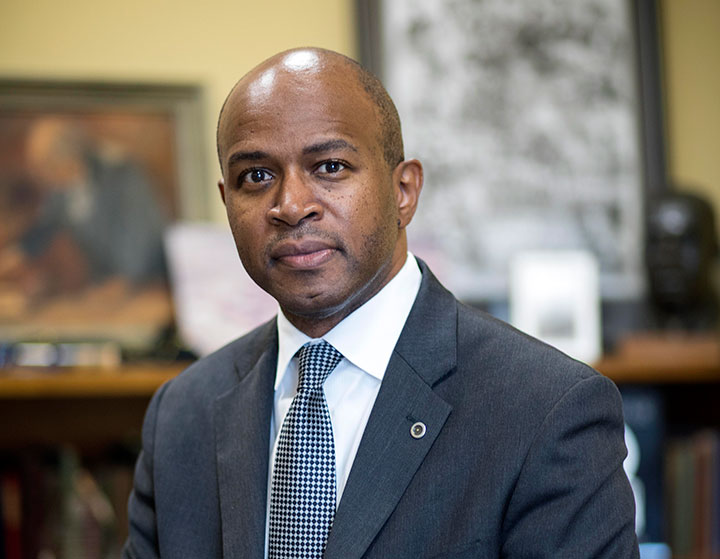 Bobby Donaldson, Professor of Civil Rights History, has been at USC for 20 years. He currently leads the Center for Civil Rights and Research located in UofSC’s Hollings Special Collections Library. 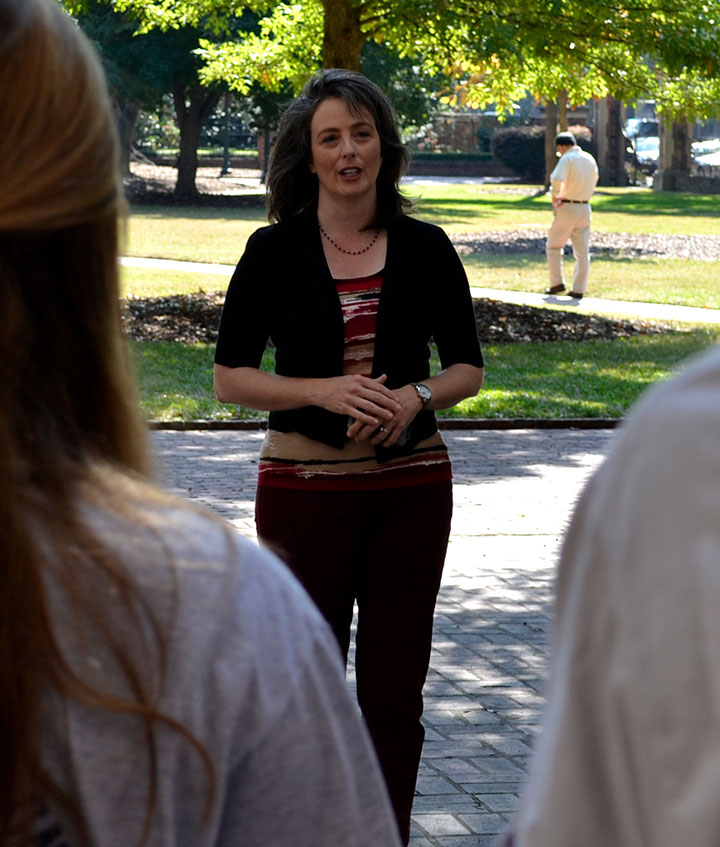 University archivist Elizabeth West offers tours of the historic Horseshoe, founded in 1801 as South Carolina College. Her book, “On the Horseshoe: A Guide to the Historic Campus of the University of South Carolina,” was co-authored with Katherine Allen and published in 2015.