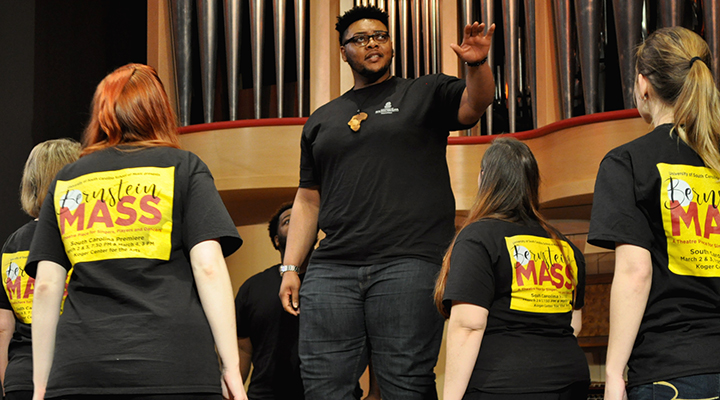 USC doctoral music candidate Johnnie Felder is one of the many students performing in Bernstein’s “Mass.” A talented vocalist, Felder plays the Preacher in the upcoming production at the Koger Center for the Arts in Columbia. 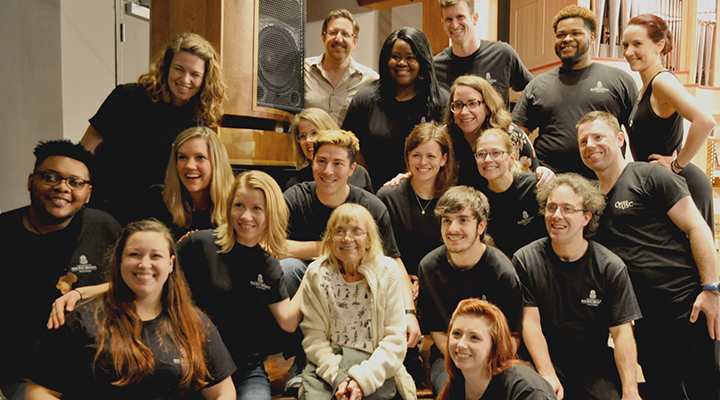 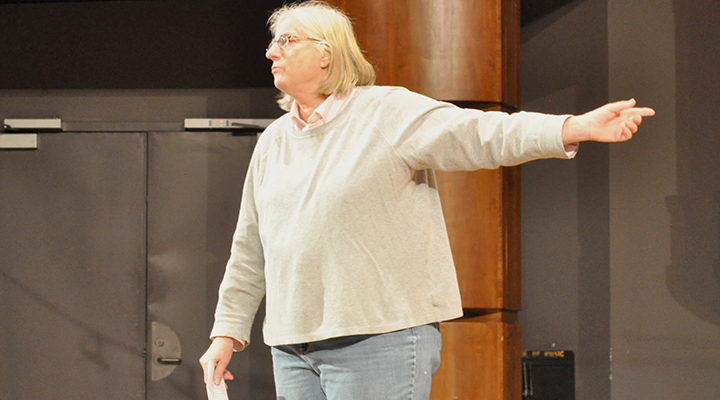 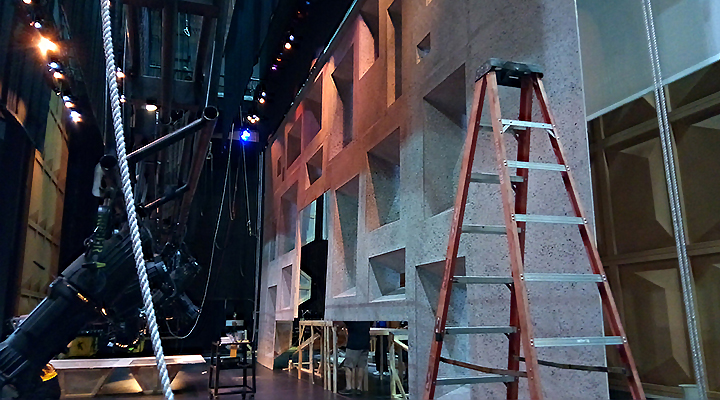 Construction of the set for Bernstein’s “Mass” is nearly complete in preparation for a March 2 opening.

On a dimly lit stage, in front of a towering church organ, USC vocal students sang of God, religion, doubt and faith.

The dozens of students practiced as street singers for the upcoming Leonard Bernstein’s “Mass,” an iconic work of American theater being put on by the university at the Koger Center for the Arts March 2-4. The production is, in the words of the students involved, “massive.”

“This is a gargantuan work to put together,” said tenor Johnnie Felder, a doctoral student in vocal performance. “You have an orchestra, a rock band, a blues band, marching band … street singers, concert choir, dancers, a children’s chorus.”

As one of the street singers, he plays the part of the Preacher, a role he said he approaches by drawing on his own observant nature.

“I portray him as a little bit of a skeptic,” Felder said. “I question everything.”

“Mass” has been hailed as composer Leonard Bernstein’s most ambitious work. It was commissioned by former First Lady Jacqueline Kennedy for the opening of the John F. Kennedy Center for the Performing Arts in 1971. This performing arts center was in part created as a memorial to President Kennedy following his assassination.

“It’s a reflection of a nation in mourning over a president that died way too young and far too tragically,” tenor Kevin Vortmann told students during the recital. Vortmann, a talented musician and singer, performed in the 2015 production of “Mass” in the Philadelphia Symphony Orchestra as the role of the Celebrant. He has been involved with other productions of Mass since then and will reprise the role of the Celebrant in USC’s upcoming production of the piece.

Bernstein decided to base his work upon the Roman Catholic Mass. He planned to compose a work that resembled the traditional Catholic mass, but instead transformed the event into a dramatic dialogue by juxtaposing the Latin liturgy of the piece with modern English vernacular, while performers question the role of belief and authority in their lives. This dialogue during the mass was meant to reflect the crises of faith and cultural discourse during the ’70s while evoking themes of peace, tolerance, and faith.

Bernstein’s “Mass” features different genres of music and groups of performers. According to stage director Ellen Schlaefer, this made it an excellent production for the university because it would involve students from across all disciplines in the School of Music. Around 200 students will perform the theatrical piece at Koger.

“Everything just seemed to point to doing this piece to celebrate this iconic American composer and to give our students a chance to explore his music in depth,” said Schlaefer.

Schlaefer said that another reason why the university saw a timely opportunity for this production was to mark the centenary of Leonard Bernstein, who was born in 1918.

While Bernstein’s “Mass” can be difficult to understand or easily explain, Felder said that after working on it, the piece grew on him.

“It’s become one of my favorites,” he said. “It’s a wonderful experience.”

Felder may have good things to say about the piece, but reception varied at the time of its release. Some music critics disliked the mixing of genres in “Mass” while others praised its creativity. The FBI thought it contained secret anti-war messages, which may have been why Richard Nixon was absent from the premiere. Some cities cancelled performances under pressure from local Catholic churches. Three decades later, Pope John Paul II requested a performance at the Vatican.

Audience reception was generally positive. People were moved by the reflection of the struggles and hopes of their times portrayed in Bernstein’s “Mass.” While the piece is over forty years old, Schalefer hopes that audiences will find parallels between the political climate of 1971 and today that will allow the production to resonate with them.

“I don’t believe it’s a piece that stuck in the ’70s,” said Schlaefer. “I believe the message of the piece is such that it transcends all that.”

When asked what the overall message of the piece might be, Schlaefer expressed that it is not so simple as that. Bernstein’s “Mass” is a complex work that features a variety of themes and meaning that is up to interpretation.

“I know what it is about for me,” Schlaefer said. “It’s about unity. It’s about all these different elements coming together.”

According to Schlaefer, that’s what a good work of art does — inspire different emotions and carry different interpretations for everyone.

Both Felder and Schlaefer implore people to attend the production. Students at USC do not often get to perform at Koger, and “Mass” promises to be one of the largest productions the university has put on.

“The show itself is under two hours. It’s a good date night,” said Schlaefer. “It will not be done very often.”

“Mass” will be performed at the Koger Center the weekend of March 2-4. For more details, visit https://www.sc.edu/study/colleges_schools/music/concerts_and_events/bernstein_mass/index.php