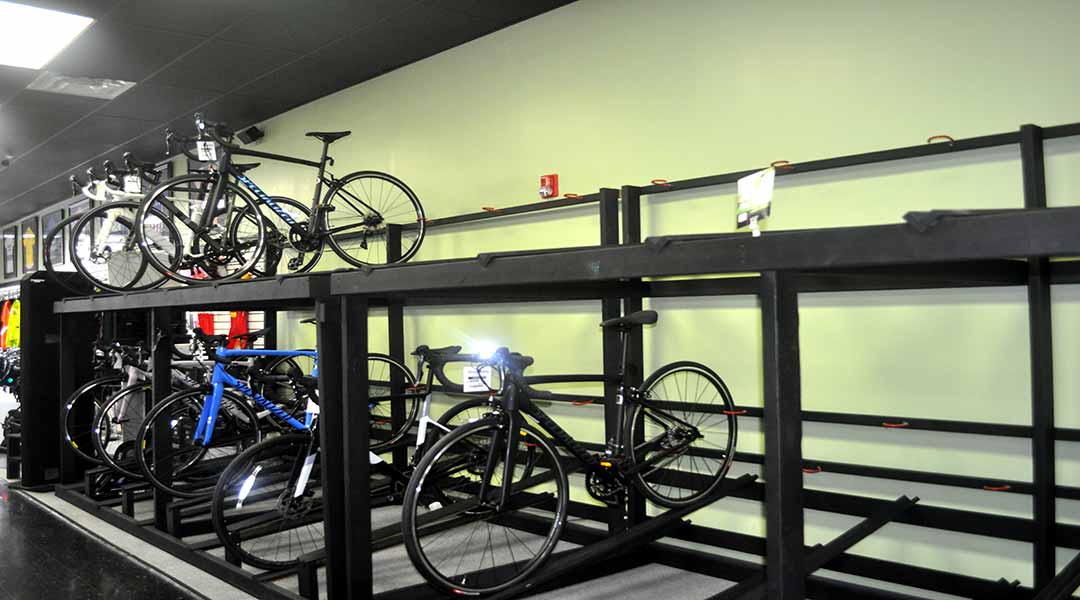 At Cycle Center on Harden Street, most bicycles sold out seven months ago. Now, there’s a shortage of bikes in Columbia and across the U.S. Photo Credit: Amoni Jerman

The coronavirus pandemic that started the country’s new bicycle boom has now led to a shortage of bikes. During the shutdown, shop owners  said they experienced a surge in bike riding and the biggest buying boom since the ‘70s.

Once the shutdown started, people had a lot of time on their hands for leisure activity. When gyms closed, they needed something to do in their free time. Jay Suri, a retail worker, said he took up biking to improve his health.

“Self-confidence and for health; just to be busy in my free time, like a hobby,” said Suri. “No complications. It’s good just to learn about yourself.”

Derek Everling, owner of Cycle Center in Five Points, said the shop sold out of bicycles by the end of June, matching last year’s total bike sales by July.

The inventory at Cycle Center was supposed to last through November, so the shortage is making it difficult for shops to sell during Christmas time.

“We’re starting to have to deal with that now because parents are starting to realize that bicycles for kids at Christmas is going to be a problem,” said Everling.

When the pandemic started, Brian Curran, owner of Outspokin’ Bicycles, was afraid it would hurt his business, but a lot of the bikes he thought he was going to have for Christmas have already sold out, along with most of his inventory.

“Most of the bikes that we’re selling now are pre-orders, meaning that somebody comes in and buys them without us having the bike here, then they wait patiently for them to come in,” said Curran. The waiting period for pre-orders can last anywhere from two weeks to a year.

Families and cyclists aren’t the only people affected by the shortage. The non-profit organization, Cola Town Bike Collective, works to provide low-cost bicycles to people trying to escape homelessness or who may not have a source of transportation.

Scott Nuelken, president of Cola Town Bike Collective, said those who want to get into biking this fall are going to have a much more difficult time, especially over the next six months.

“Some of the bike manufacturers are saying that orders put in now won’t be delivered until fall of 2021, so you’re looking at a full year out before bikes will be available at all and the same is holding true for a lot of parts,” Nuelken said.

“Because of everything from the tariffs and of course plants shutting down in China that manufacture the parts, there’s just been an incredible shortage of parts available.”

A shortage of parts isn’t the only thing stopping cyclists this year. Curran, Everling and Nuelken all agreed that Columbia’s biking infrastructure needs more work.

“I think Columbia still has a long way to go with being bicycle-friendly,” Curran said. “The thing I hear the most is ‘Oh, I would love to ride a bike, but I’m afraid to because we don’t have any protected bike lanes’ and while the state and the city have added some bike lanes over the past several years, they haven’t really done anything to maintain them,” he said.

Justin Graham, who has been biking for about a year, said he wants to see more bike trails in the area. “I enjoy coming here (Three Rivers Greenway), but I would like to see more bike-only trails around the area,” Graham said.

“Hopefully, with so many more new cyclists, that’ll put pressure to build some new trails, take up railways and convert them to trails and so forth,” he said.

Since bicycles are in high demand, prices have increased. The average price of a bicycle at Outspokin’ is $900, but Curran said prices went up by just a few percentage points.

“They have gone up a little bit. Not much, but since the pandemic started, prices have gone up between 2% and 5%,” he said. One of his more popular bikes, the Trek Verve, is priced over $2,000 online.

At the Cycle Center, Everling said bikes start at around $400, then, “they go to the moon.”

Everling said the bicycle boom has been great for business, but “a bit of a curse.” 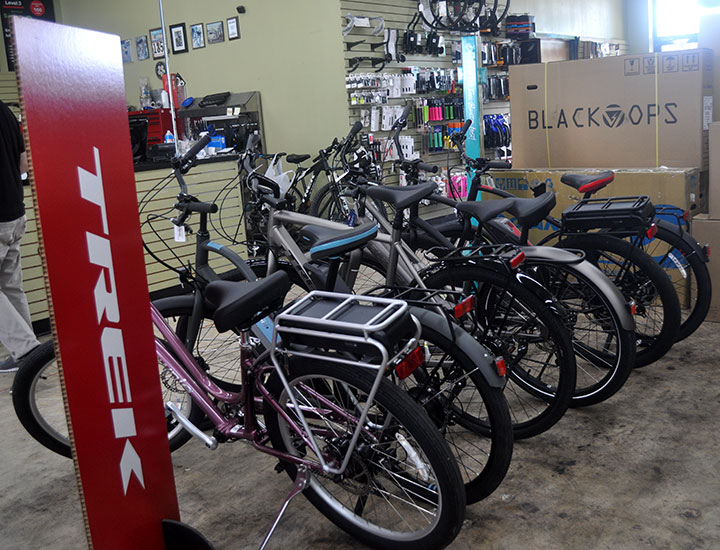 “Trek” brand bikes are popular at Outspokin’ Bicycles, where the “Trek Marlin” and “Trek Verve” were the most requested bikes. 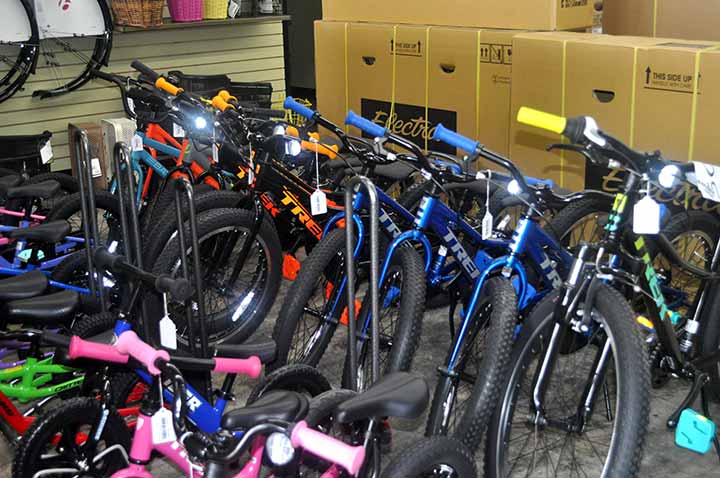 Bike shops are experiencing shortages of parts and bicycles that are expected to last through the Holidays. 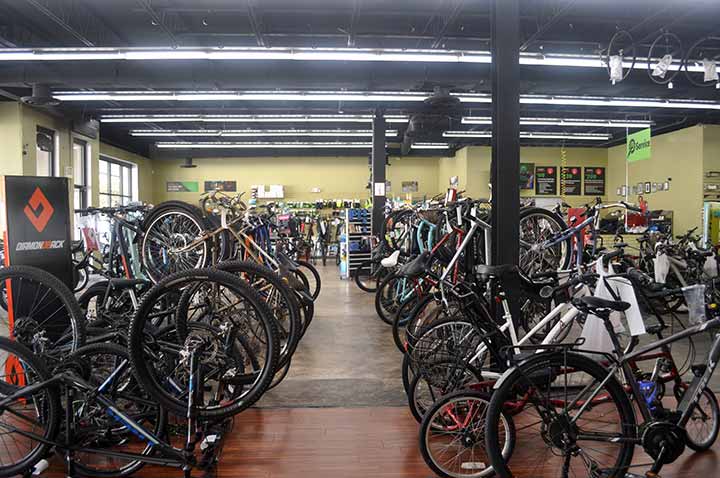 After bikes sold out, most bicycles at Outspokin’ were bikes waiting for service or pre-ordered bikes from customers. 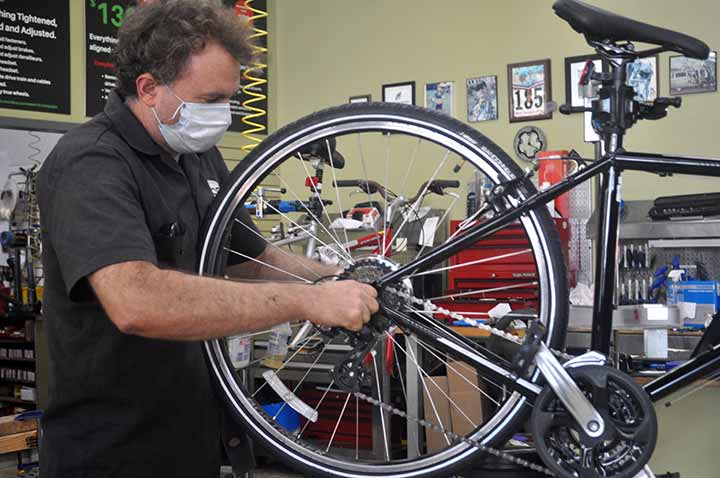 Some bike shops around Columbia are making up for lost sales through service and bike repairs, but parts are now hard to get.