South Carolinians speak their minds at the polls 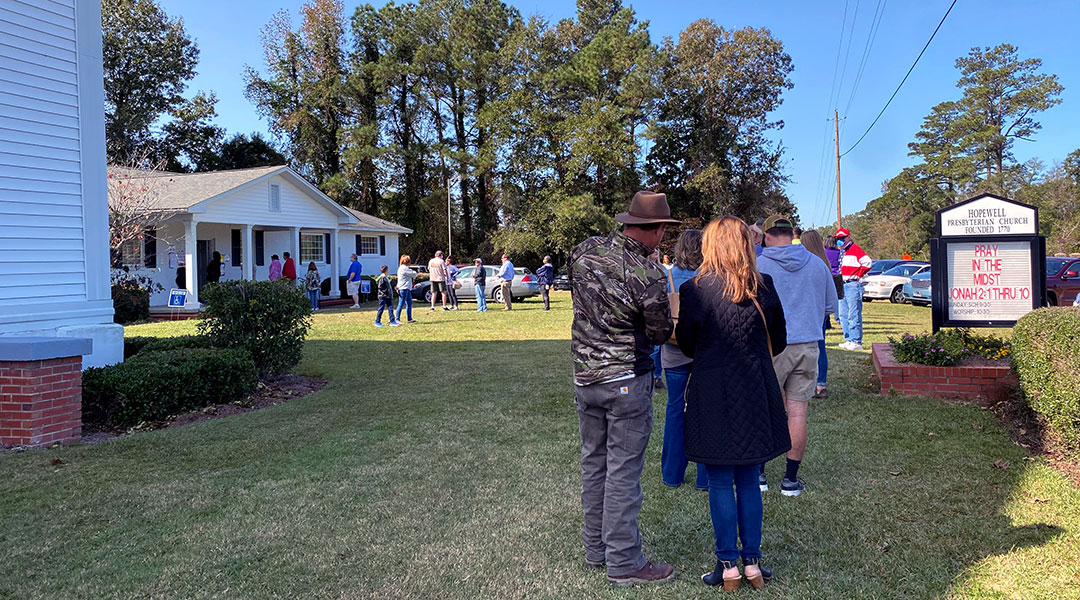 As the tumultuous 2020 presidential campaign came to a close Tuesday, voters across the state of South Carolina turned out in droves on Election Day to cast ballots for President Trump or former Vice President Joe Biden.

About 1.3 million absentee ballots have already been returned in the state, and over 70% of registered voters were  expected to cast their election vote by the time polls closed at 7 p.m., potentially beating the 2008 record of 76% voter participation.

The race for U.S. Senate is up in the air as Republican incumbent Sen. Lindsey Graham faces off against Democrat Jaime Harrison. Harrison, the former chairman of the state Democratic Party, raised $57 million in campaign funds, the highest total for any U.S. Senate candidate in history.

Long lines, masked and unmasked voters, cotton swabs and stickers characterized the 2020 election and reporters at Carolina News & Reporter were there to cover a once-in-a-lifetime pandemic election.

Amid a pandemic, searching for change

“The virus is killing people left and right and if people don’t believe it exists then they ain’t going to do nothing about it,” Campbell said. “So I think the biggest thing is realizing that the virus really exists and until people realize that, there will be no change.”

In order to make that change a reality, Campbell says people need to go to the polls and vote. Doing so, he said, would ensure not just a Joe Biden win, but more importantly a defeat of the incumbent Republican Sen. Lindsey Graham by Democratic challenger Jaime Harrison.

“From what I’m hearing, Mr. Graham don’t care about nobody but himself,” Campbell said. “If enough people come out and vote there won’t be odds, it will be a straight Jaime Harrison win.”

Campbell said that the presidency will take care of itself, but South Carolinians need someone to represent them and he said Lindsey Graham is not doing that right now.

Looking for leadership and kept promises

Twanda Outen, a life-long South Carolinian and professional caregiver, voted for a president based on promises of unity.

“There’s just too much dividedness and I’m just looking for leadership that’s going to guide this country for betterment, not for their own personal gains,” Outen said.

Outen said that so long as her candidate wins and sticks to his campaign promises then the country will become a better place. She hopes to know what her future holds by then end of the night but isn’t sure when to expect results.

“I don’t know what’s going on with the process; a lot of people voted early with the absentee vote, so I don’t know if if they can actually have accurate or exact numbers within 24 hours,” Outen said. “I’m sure that can be done, I just don’t know if it will be done.”

Outen is intrigued by the race for the U.S. Senate between incumbent Republican Sen. Lindsey Graham and Democratic challenger Jaime Harrison.

“It’s something new for South Carolina and I’m looking forward to having someone new in office,” Outen said.

Casting a ballot for others

For 24-year-old Miguel Velert, voting today is much more than voting for himself. The Francis Marion University alumni says his driving force to wait in line at the polls is not how he will be affected by this election, but how those around him will be.

“I am the least affected by whoever becomes president,” Velert said. “But I know other people’s lives and rights depend on this election.”

A supporter of the Democratic Party and former Vice President Joe Biden, Velert values his right to help make a change in the country and notes this election’s significance.

“It’s important because there’s so much on the line,” Velert said. “Reproductive rights, freedom of expression and adequate access to healthcare are all important issues that I‘m concerned with and are issues that, in some cases, could mean life or death for some people.”

He hopes that his vote will be one more vote for justice, fairness and decency. No matter the outcome of this election, he is hopeful that America will reach a level of unity.

“I’m hopeful that we can still go back to a more peaceful and united America,” Velert said.

JoAnna Odom, voting in Florence, said that voting has been a tradition in her family that she has participated in since she was 18.

“My daddy would have rolled over in his grave if I wouldn’t have voted,” Odom, 42, said. “It’s my American duty.”

Odom has been a supporter of President Trump for the past four years, also voting for him in the 2016 election.

She believes that, despite how politically divided America seems to be, there is a possibility of coming together as one after this election.

“I think the media is making things more divisive than the left,” Odom said. “On a regular, normal day-to-day basis, I see love out there. I see people getting along – I saw it at the polls this morning. No matter race, people were coming together and fist-bumping one another.”

“I think we will get over this,” said Odom.

Distainful of Trump and longing for unity

George Williams, a 51-year-old YMCA lifeguard and electro-mechanical engineer from Clinton, wanted to make sure his voice and opinion were heard Tuesday. Williams is hoping for unity within the country and wasn’t shy about showing his disdain for President Donald Trump.

“Well, I voted for Biden-Harris because Donald ‘chump’ is basically a racist… he’s not a unifier, he’s a divider and a crook,” said Williams. “So, I mean, if anybody that supports that, they’re in that same category, that same boat, it’s easy.”

Williams says that no matter the outcome,  Americans need to think positively and put all negativity to the side.

“Just trying to keep everything positive. As long as it’s positive, everything will be alright. And there’s a lot of gun sales and ammo sales that’s been spiking across the nation, a lot of negativity, but we’re just gonna have to put all that to a side,” Williams said. “And everybody come together because united we stand, divided we fall.”

Trying to make a difference

Adkins, 57, preferred not to say who she voted for, but said she did not vote a “straight ticket,” a method used in South Carolina and other states that allows people to vote for all candidates of a particular party with just a single mark on the ballot. Adkins also stressed the importance of voting in a politically divided country.

“You just always want to make a difference. I just feel like you don’t have a voice if you don’t cast your ballot,” she said.

Brantlee Stone, a social worker, voted Tuesday morning at Olympia Learning Center and was happy that the experience was quick and easy.

“Honestly, I was really surprised. I expected that there would be a line, but it was super quick and easy,” the 26-year-old said.

Stone said she voted blue – endorsing Vice President Joe Biden for President and other Democrats on the ticket – all the way down the ballot and hopes for good things this election.

“Fingers crossed. I’m just hoping for the best, but expecting the worst.”

He wants a clear winner and no court interference

Richland County resident Robert Taylor is disabled, but he was determined to cast his ballot today.

Taylor, 64, voted at Edward Memorial ARP Church in Cayce. He said he hopes the election will be straight-forward.

“I hope that this election will be a landslide so there is no big falling out or going to court or anything else. I hope this will be a decisive one.” Taylor said.

Taylor said he grew tired of the campaign ads from both U.S. Sen. Lindsey Graham and his Democratic challenger Jaime Harrison.

“The ads got kind of nasty and there’s no reason for that,” said Taylor. When asked about the presidential campaign ads, he said he was “real tired.”

“But, then again, I’ve been tired of the president for many years now,” Taylor said.

Taylor said he just hopes his vote will bring change for America.

Seeking a fresh face for the U.S. Senate

Robin McCormick, a 36-year-old state worker, said she was seeking a “fresh face” for the U.S. Senate in South Carolina.

“It seems like he’ll be a new, fresh face for the Senate for us,” she said.

She voted at Edward Memorial ARP Church in Cayce.  “It was fast, it seemed safe. Everybody had on masks and gloves and provided touch-free swabs and things like that,” McCormick said.

McCormick said if the nation continues to be politically divided, “it’s going to be unpleasant.”

“But hopefully after this election everybody can come together and compromise,” McCormick said.

Joel Leckie believes it is Americans’ civic duty to voice their opinions on Election Day. Leckie, a 56-year-old retired teacher from Clinton, hopes that his vote brings change to the country and helps to bring Americans back together.

“I’m hoping that we come together, we can have good healthcare and that our economy will stay strong and we can listen to our scientists and overcome this awful COVID.”

Leckie says that he voted for presidential candidate Joe Biden, believing that Biden will help bring the change that was aforementioned.

“I voted for Joe Biden and what led me to my decision was his personality, his demeanor, and his plans for the next four years, as far as bringing us together and dealing with, you know, listening to the scientists, dealing with COVID. I think he’ll do a good job, especially internationally,” Leckie said.

“It was very easy in there. It was very well done. I’m pleased. I’m glad that we as Americans have this opportunity to do this,” Leckie said. 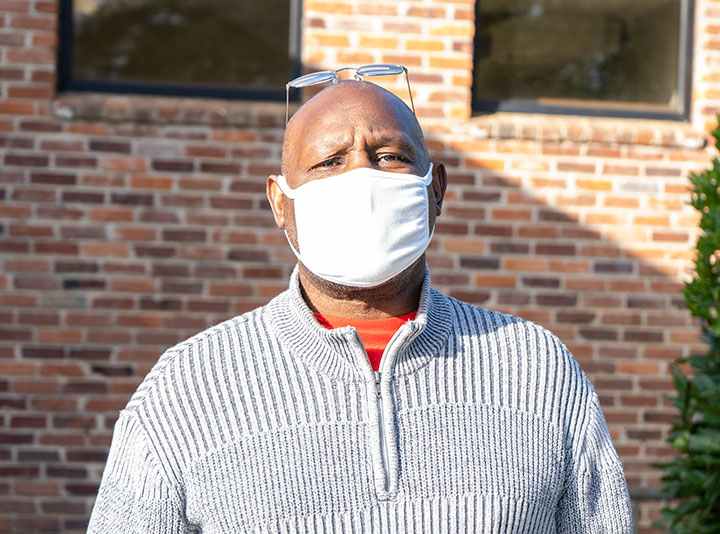 Charles Campbell says the most important thing South Carolinians can do is come out and vote to ensure they take care of their state. He is hoping for a Jaime Harrison win in the Senate. Photo credit: Christopher Lorensen 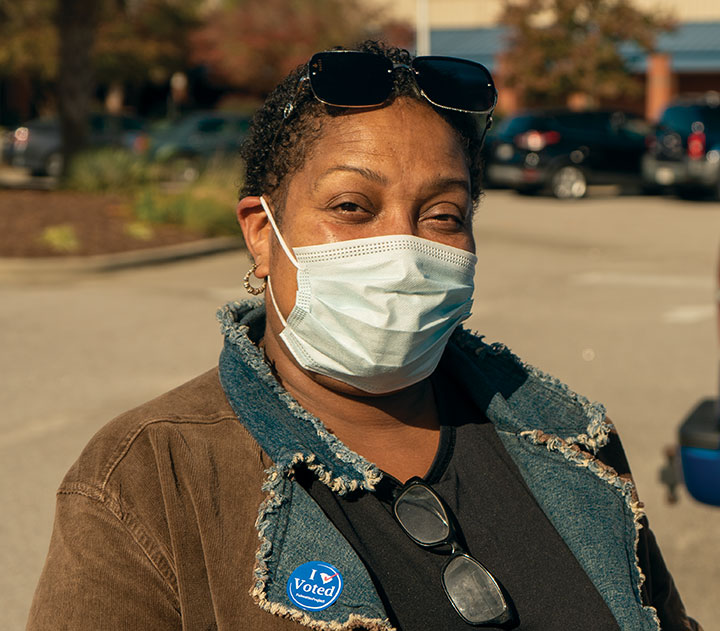 Twanda Outen hopes this election will move the country to unity. She hopes to learn if that is true by morning but says she expects to see results at the end of the week. Photo credit: Christopher Lorensen 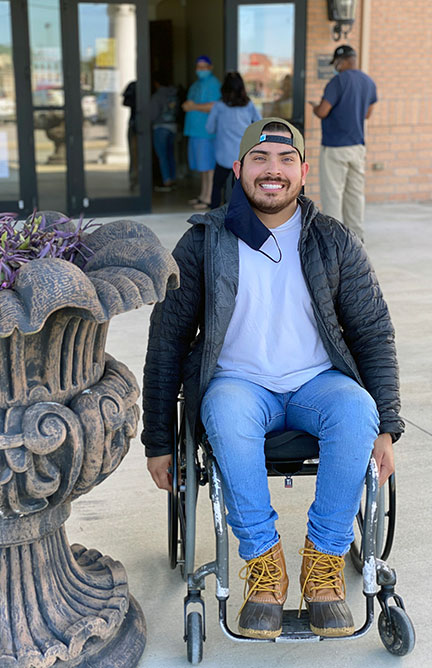 Miguel Velert hopes that his vote will be a vote for justice, fairness and decency. Photo credit: Hallie Hayes 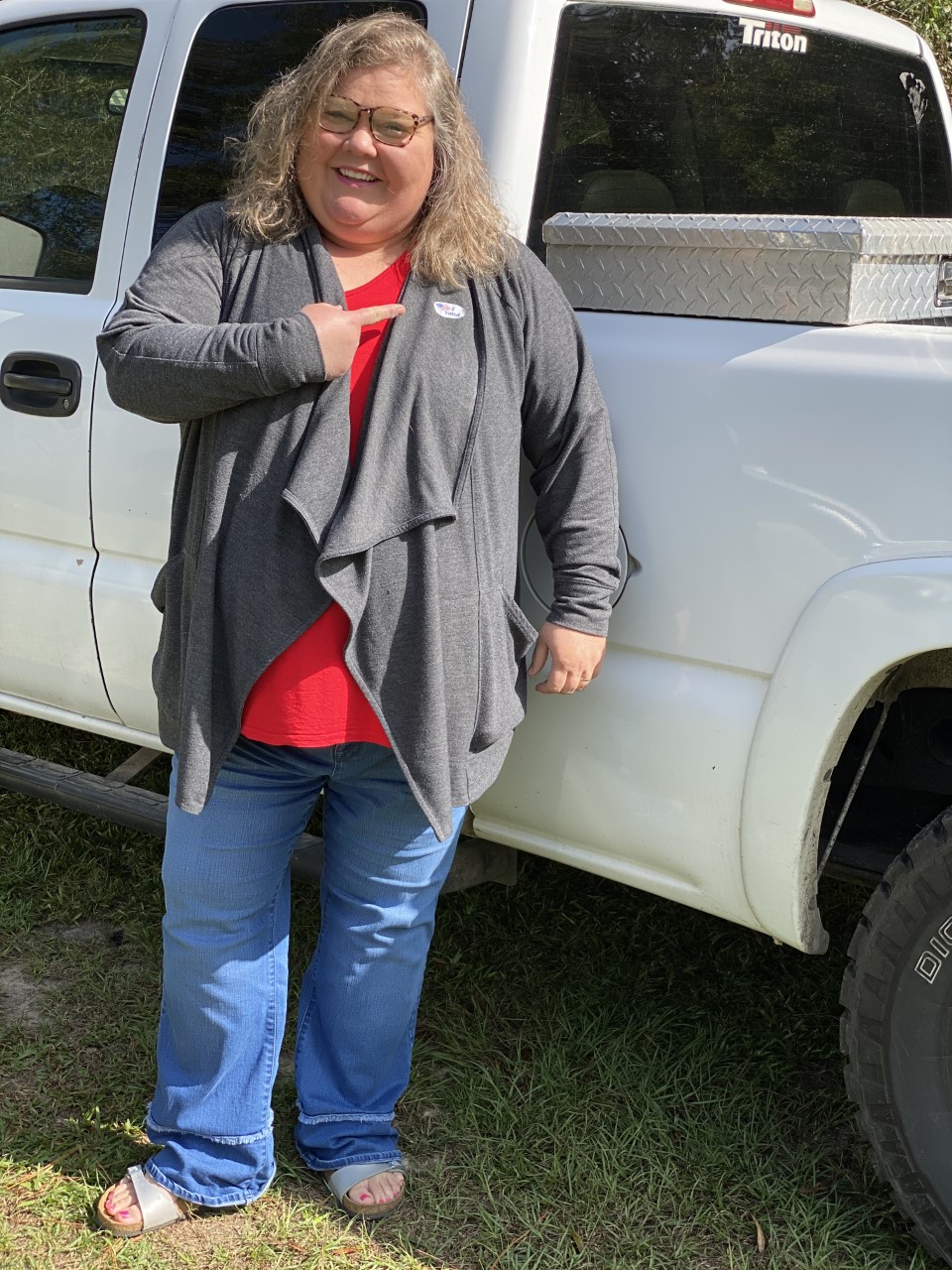 JoAnna Odom has been voting since age 18 and views it as her American duty. Photo credit: Hallie Hayes 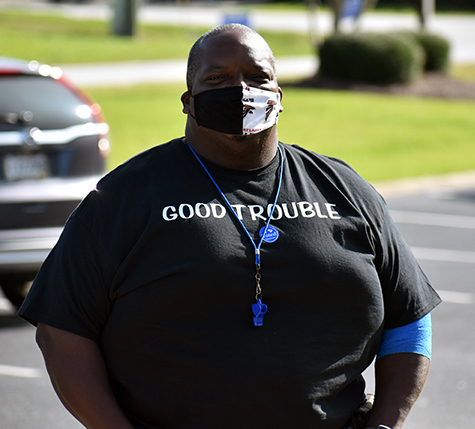 George Williams hopes that his vote will help unify the country and believes President Donald Trump has divided the American people more than he’s brought them together. Photo credit: Caleb Gilbert 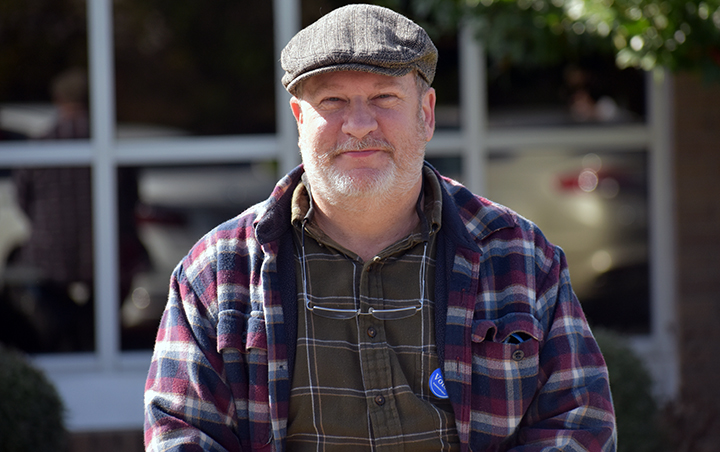 Joel Leckie hopes that whoever is elected president will find a way to keep the economy going, while putting an end to COVID-19. Photo Credit: Caleb Gilbert 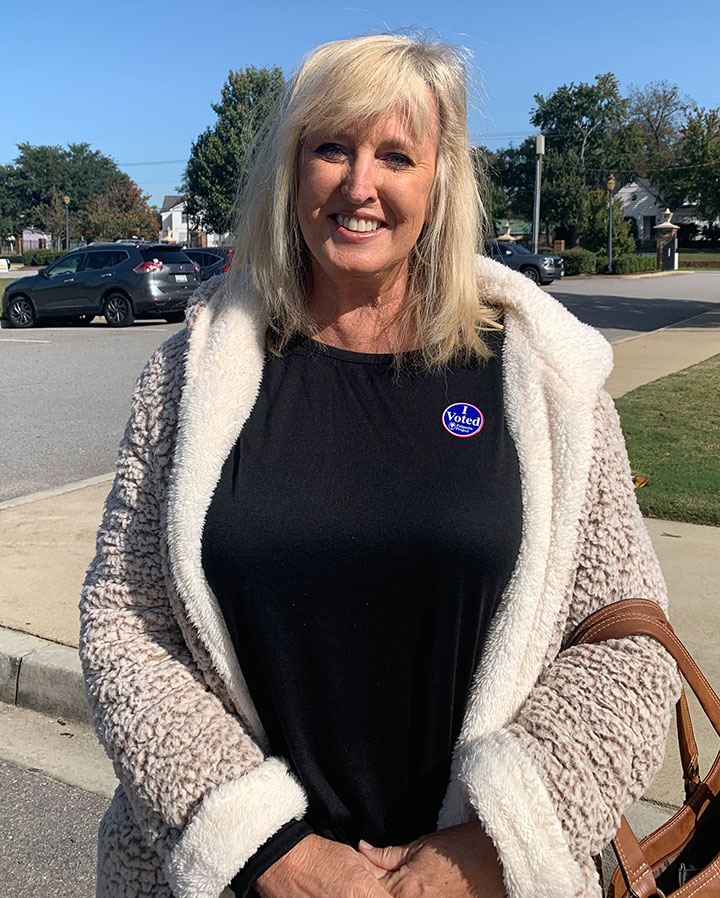 Allen Adkins went to the polls Tuesday morning at Olympia Learning Center. She said she did not vote a straight-ticket and stressed the importance of voting.

Brantlee Stone shows off her “I Voted” sticker after “voting blue” all the way down the ballot.