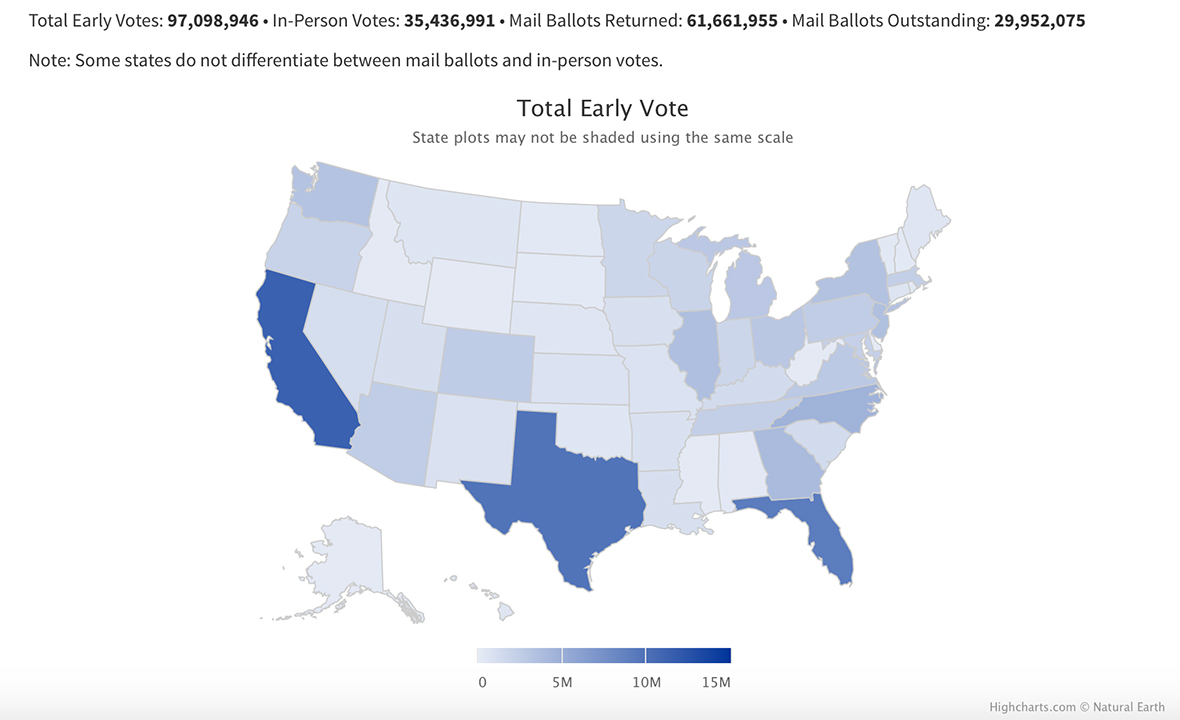 As South Carolinians prepare to go to the polls Tuesday, more than one million of the state’s voters have already cast their ballots in the 2020 presidential election, elections officials reported Monday.

The South Carolina State Election Commission reported more than 1.3 million ballots have been returned as of 12 p.m. Monday. That includes those voting in-person absentee and those mailing in absentee ballots.

Because of the coronavirus pandemic, all registered voters were eligible for early voting this year. According to the election commission, this early turnout is already double the 2016 general election, where 517,000 absentee ballots were cast. That year, absentee voting was open to voters with disabilities or who had special circumstances that would prevent them from being at the polls on Election Day.

In the past 25 years, the highest voter turnout was in 2008 with 76 percent of eligible voters. If the trend continues, the election commission estimates that about 2.7 million of the 3.5 million registered voters in S.C. will cast their votes.

Election officials are estimating that half of voter turnout for the entire 2020 election will be from early absentee voting. Nationwide, more than 97 million early votes have been counted, according to the U.S. Elections Project.

As the race comes to a close, Republican Sen. Lindsey Graham and his Democratic challenger Jaime Harrison have been on bus tours around the state, adding some last minute stops before ending their last campaign day.

Graham made stops in Aiken, Rock Hill and Lexington where he was joined by Attorney General Alan Wilson, U.S. Rep. Joe Wilson and Gov. Henry McMaster. Graham encouraged the crowd to “#GetItDone’ and cast their votes.

“Here’s the really good news: when it comes to Joe Wilson, when it comes to Alan Wilson, Gov. Henry McMaster, and all of these people… Donald Trump and Lindsey Graham; the best is yet to come,” Graham said.

Meanwhile, Harrison is hosting his final drive-in rally of the election in his hometown of Orangeburg at 6:30 p.m.