Bills in the State House pushing for gun reform now 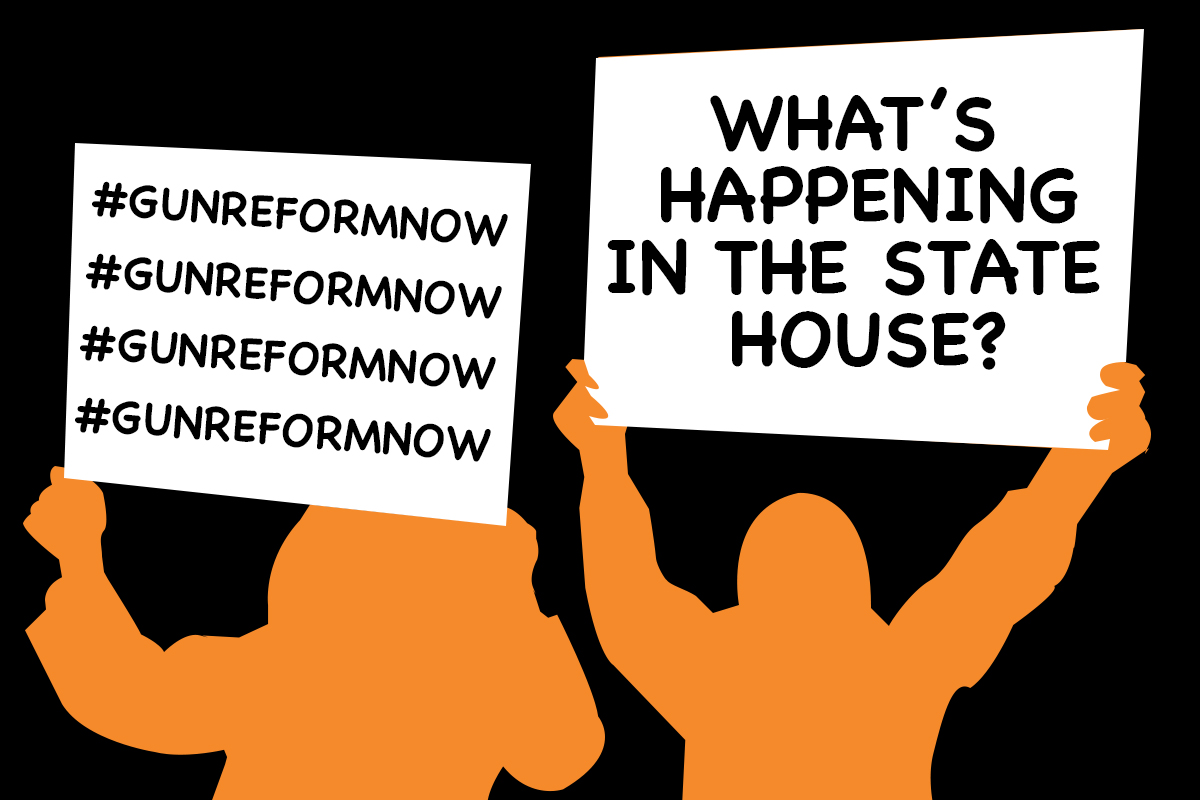 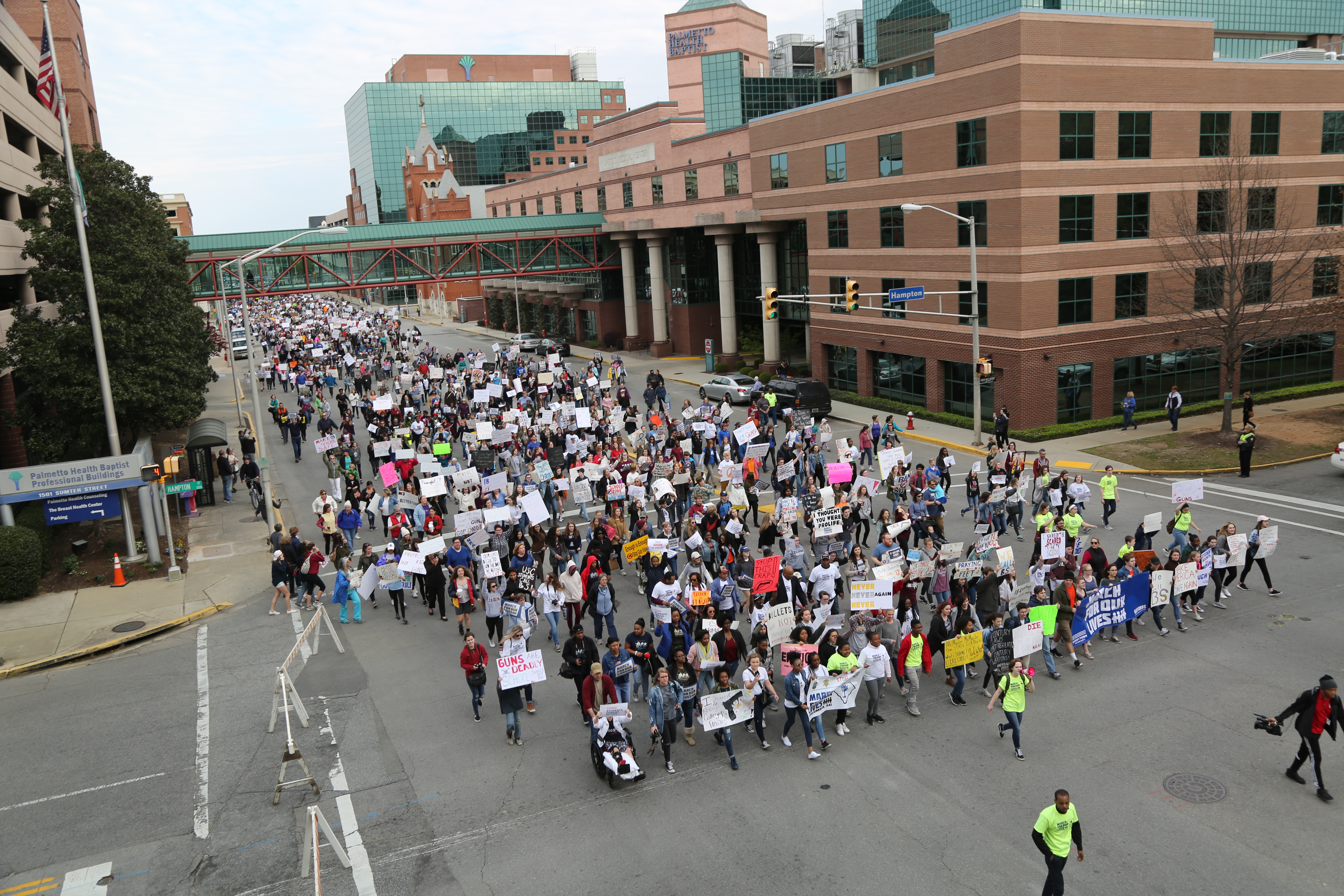 The view of March For Our Lives in South Carolina outside of Palmetto Health on March 24, 2018. Photo by Larissa Johnson.

The national effort calling for gun reform has sparked magazine covers, student walk-outs and a widespread march. Even at a local level, this relentless surge for change is apparent.

On Saturday about 3,000 people took part in the March For Our Lives protest along the streets of Columbia, while 800 other locations participated simultaneously.

Although the shooting at Marjory Stoneman Douglas High School in Parkland, Florida, was the catalyst for the march, the topic of gun violence reform has been at the front of many South Carolinians minds after the 2015 Emanuel Church massacre in Charleston, South Carolina.

Despite that, it’s taken a long time to get gun reform laws to the senate. One such bill, commonly referred to as the “Charleston Loophole,” aims to prevent a similar shooting from happening again.

The bill requires the court to report charges regarding restraining orders, convictions related to domestic violence, harassment and other similar charges to SLED within 48 hours.

Additionally, it reduces the time S.C. courts have to report cases that would prohibit the sale of a gun to a database from 30 to five days. It also extends the delay period from three to five days for those who aren’t immediately rejected or approved to buy a gun.

The bill was referred to the Senate Committee on Judiciary after Sens. Marlon E. Kimpson, D-Charleston, and Chauncey K. Gregory, R-Lancaster, sponsored the bill and introduced it in the senate on March 8.

That is just one of over 50 bills being worked on at the State House to modify gun laws. Here is a brief summary of the other five bills that have gotten the most response.

Sponsored by Rep. Gilda Cobb-Hunter, D-Orangeburg, Bill 3181 Firearms Criminal Background Checks calls for a national, instant background check to be run by a licensed dealer before a sale. Additionally, a form must be completed and sent for approval to the Chief of SLED, “that identifies and confirms that the check was performed,” according to the bill. The dealer may charge as much as $25 for this background check.

After the licensed dealer contacts the National Instant Criminal Background Check System (NICS) for a background check on any sale or transfer of a firearm, he or she must receive a unique identification number from NICS, or wait 28 days from the date NICS was contacted to sell or transfer firearms. This bill was referred to the Senate Committee on Judiciary last January, and further referred to the subcommittee three months later in April.

This amendment states that selling, transferring or alluding to the sell or transfer of a firearm to anyone under the age of 18 is illegal. The bill also calls for the removal of the term “handgun” in place of the term “firearm.” The bill is sponsored by a selection of senators, and resides in the Senate Judiciary Committee.

Prosecuting breaches such as false identification

Sponsored by Sen. Sandy Senn, R-Charleston, bill S. 340 was first introduced in February of 2017 and currently resides in the Senate Committee on Judiciary. It aims to stop the sell or transfer of firearms under false pretenses. The bill prohibits any person from knowingly providing dealers or sellers false information with the intent to deceive. If found guilty, the person can be charged with a misdemeanor; which could result in a fine of up to $3,000 and/or imprisonment ranging from up to three years.

Making the threat of gun violence in schools criminal

This bill was introduced to the senate in 2017 by Sen. Senn and Sen. Climer, R- York County. Earlier this March, the Senate committee ruled in favor with amendment judiciary, moving the bill out of committee and onto the next stage. The bill establishes that any threat or conspiration to threaten to cause bodily harm or damage to any person or place owned by an education institution by use of a firearm or dangerous weapon is a misdemeanor or felony. The act will take effect following approval by the governor.