A look through the University of South Carolina’s 1977 Garnet and Black yearbook yields a trove of rich history. But among pictures of smiling faces sporting eccentric hairstyles and huge eyeglasses of yesteryear, there are some photographs that are haunting the university from the past.

Pictures from the old Garnet and Black yearbooks feature white students in blackface. Close to a dozen images featuring the offensive imagery were found in the online archives in just a five-year span of yearbooks.

The photos in the 1977, 1980 and 1982 issues show students at various fraternity and sorority parties dressing as Aunt Jemimah, plantation slaves and early 1900s black performers. Oftentimes, these images were also accompanied by offensive and insensitive captions.

One image from 1977 features a student in blackface and an afro wig alongside the caption “At Sigma Nu’s party [name redacted] partakes in some ‘Soul’ fun while his fellow brothers and sisters dressed in more contemporary fifties wear.”

A national scandal over blackface in college yearbooks erupted when a conservative website published a photograph allegedly of Virginia Gov. Ralph Northam in blackface in his medical school yearbook. Northam now says he does not believe he is the student in the photograph, although he acknowledged he put on blackface for a Michael Jackson routine after medical school.

In the wake of the national controversy, USC President Harris Pastides had university personnel review old USC yearbooks. He sent out an email to faculty and students on Feb. 19 admitting that the school’s old Garnet and Black yearbooks featured similar images.

“These photos will cause pain and anguish among members of our community,” Pastides wrote. “We must make it clear that bigotry, racism and misogyny have no place at Carolina.”

His email only mentioned that the photos existed but did not disclose those images to the public or where to find them. But USC archived all of its Garnet and Black yearbooks throughout the book’s history and anyone can few these pages from the past. Click here to access the database.

Nancy Tolson, the assistant director for African-American Studies at USC, explained why she thinks blackface was tolerated in photos like these from the past.

“It’s one of those things… ‘Everybody wants to sing my blues but nobody wants to feel my blues,'” Tolson said. “And so they want to look like it but they don’t want to be it. Or they feel like they are being… they’re making fun of something they don’t understand.”

When students were given the opportunity to view these photos, many were disappointed but not surprised.

“Oh my god,” Nathan Markwood, a student at USC, said. “It’s much more terrifying looking at the pictures than to just think about it because in all of these pictures, everyone is just smiling and dancing and making fun of it. And that’s kind of horrible.” 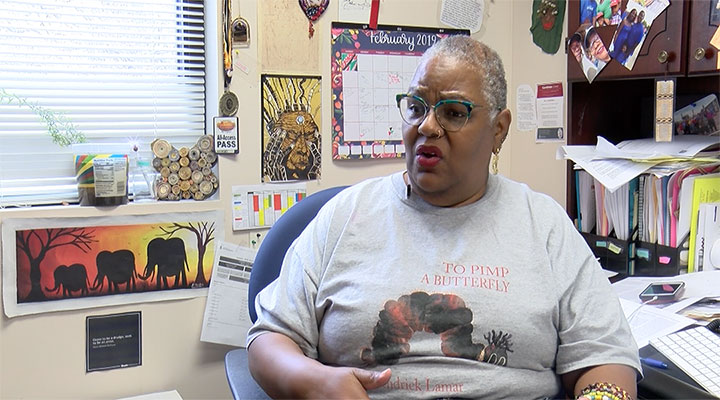 Nancy Tolson, the assistant director for African-American Studies at USC, was not surprised at the pictures in the old yearbooks. She says she would love to speak with people featured in these images to find out their thought process when taking the photos and how they feel about it now.