Breaking the code for women in STEM careers 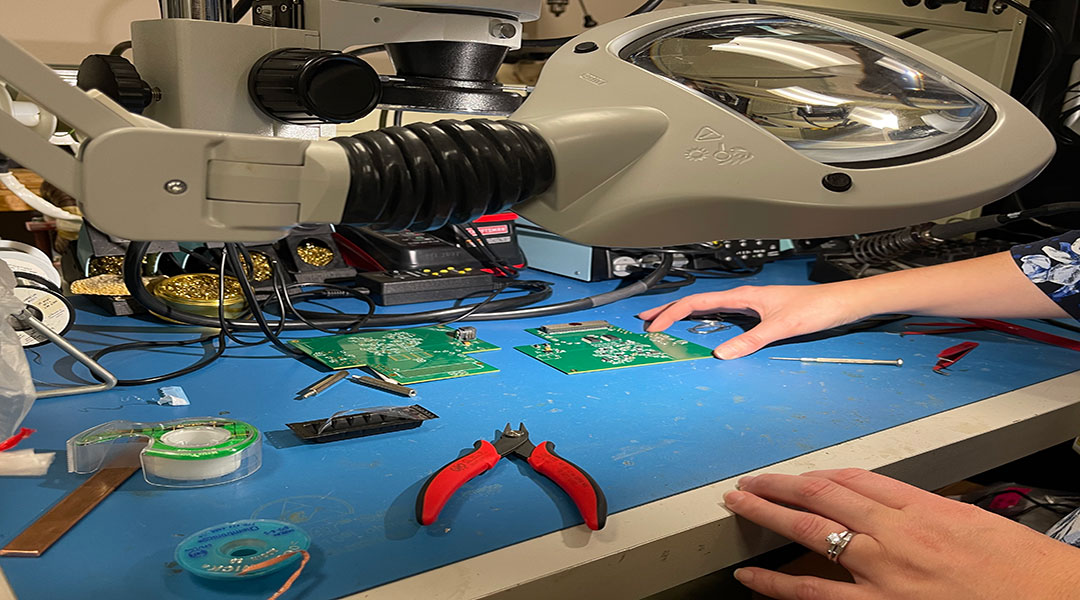 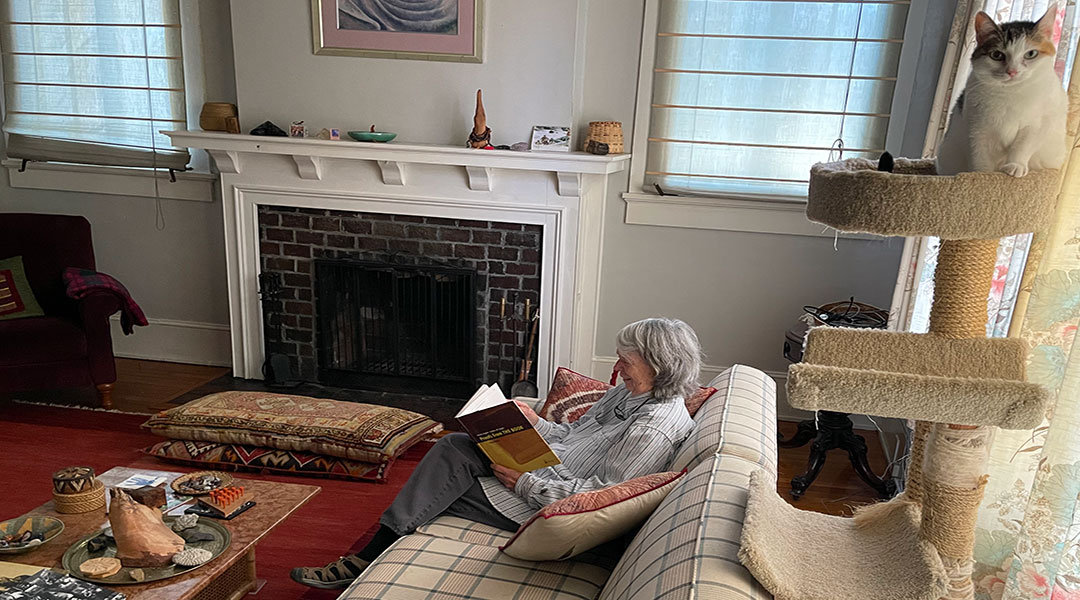 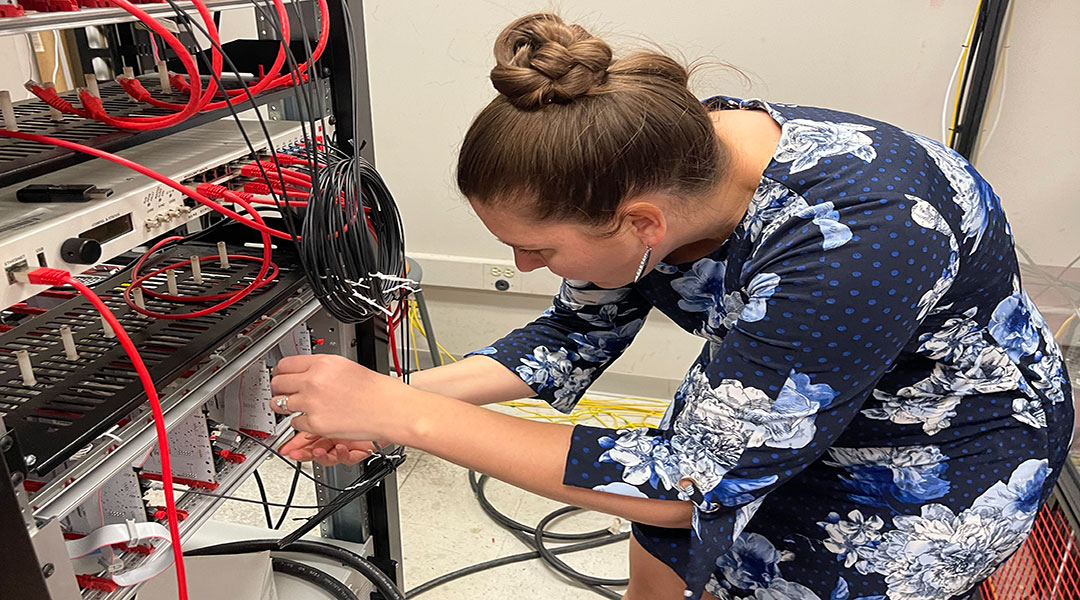 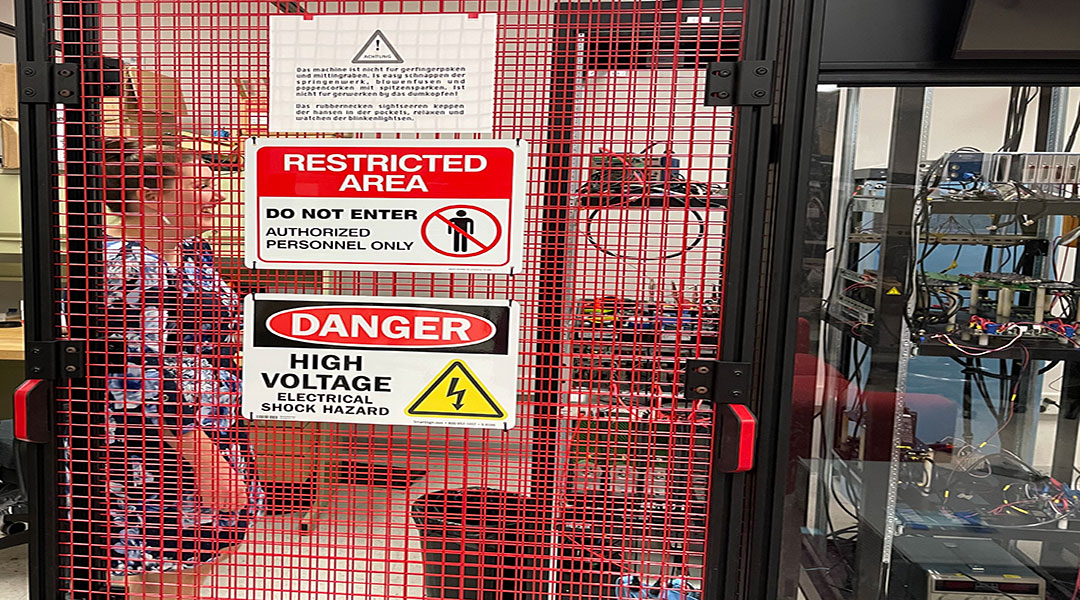 First in a series on South Carolina women pursuing careers in the scientific, technological, engineering and mathematical fields.

Not all little girls dream of being princesses.

Some develop a love for performing experiments, healing others, building things with their hands and tinkering with technology.

In honor of Women’s History Month, we celebrate South Carolina women in science, technology, engineering and mathematics who inspire young girls to pursue their passions in this male-dominated field.

Virginia Johnson proved that age is but a number when she returned to school and earned a doctoral degree in mathematics from the University of South Carolina at the age of 63.

After earning a bachelor’s degree in mathematics in 1971 at Antioch College, she went on live in England and South Africa while she and her husband raised four children. In South Africa, she earned an advanced diploma to teach.

Although she had planned to return to teaching high school, she realized she wanted to expand her education and get her doctoral degree.

“I think the thing that worried me the most was that I was long in the tooth by then,” Johnson said. “So I wasn’t really sure anybody would want to let me go into the program and pay me, but UofSC accepted me, so I went.”

After receiving her doctoral degree, she taught at Lander University and UofSC before becoming an associate professor and department chair at Columbia College. Now retired, Johnson, 74, said she would go back to teaching if the classes are in-person, not overly stressful and interesting to her. 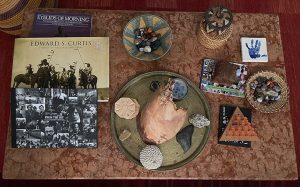 Johnson said she would regularly struggle with imposter syndrome, but her mother, teachers and classmates inspired her to keep working toward her goals.

“I was completely accepted as a graduate student. My age just didn’t seem to matter to the people that I was studying with,” she said. “I never was discouraged.”

Eva Czabarka grew up in Hungary with two high school math teachers as parents. She always knew she was good at math, but wasn’t sure of her career path.

“I felt that if I’m not good enough as a teacher, then what do I do with my degree,” she said. “Because then I can do a lot of damage to the high school kids.”

During the time that Czabarka was finishing her degree, the Iron Curtain fell, signaling the end of the Cold War; Russian troops stationed in Hungary were leaving. Czabarka had to make an expedited decision to get her doctoral degree.

She applied and was accepted into the doctorate of mathematics program at the University of South Carolina. After receiving her doctorate, she did postdoctoral work at the ,National Institutes of Health as a researcher and was a faculty member at the College of William and Mary before returning to teach mathematics at UofSC along with her husband.

While in Hungary, she said it was strange to her that girls look for female role models in her field because her gender doesn’t determine her abilities.

“It’s important that you don’t feel that you can’t do certain things because you can’t find somebody exactly like yourself in that particular field,” she said. “Why would you need to? Nobody is exactly like me.”

JiaJia Zhang didn’t have many female mentors in the STEM – science, technology, engineering and math –  field when she was growing up in China, she said. Now, as a professor of epidemiology and biostatistics at the University of South Carolina, she has female friends in her research field and collaborates with them on different projects.

“We discuss career development, particularly after me being promoted to professor,” Zhang said. “So I contact them to seek some guidance.”

After landing a job at the University of South Carolina as an assistant professor, she advanced to chief of the biostatistics division at the university. Zhang said that she enjoys her research because it relates closely to real life and measures the effects of different issues on the population.

“You cannot imagine how close it is,” she said. “You can see what’s happening for the people around the area.”

While studying for her bachelor’s degree in engineering physics at Murray State University in Kentucky, Kristen Booth chose to go the electrical engineering route on a whim when many of the other students in her class wanted to go into mechanical engineering.

Booth ended up falling in love with her chosen field when she started working in a professor’s research lab on campus her freshman year – it was that same professor who inspired her to pursue her doctoral degree in electrical engineering.

“He really explained to me to search for graduate schools, how to apply, who to talk to,” Booth said. “The things that you call soft skills – that unless somebody explained them to you, you may or may not be able to pick up intuitively.”

Now, she is an associate professor of electrical engineering at the University of South Carolina and has a research lab in the College of Engineering and Computing, where she and her students study power optimization on a large scale.

Booth also spends time as a faculty advisor for Eta Kappa Nu, mentoring students that are going through the same process continuing their education and research.

“I’m a really big proponent for making sure that students know they can and should ask for help,” she said. “[They] are doing it for the first time, and they shouldn’t really know what they’re doing.”

Aside from electrical engineering, Booth has learned to pilot an airplane as a hobby outside of her work.  In her teenage years, Booth had a friend whose family owned planes, which inspired her to pursue her pilot license. She now trains two to three days a week at Columbia Metropolitan Airport before riding her bike to campus to teach classes.

Like Eva Czabarka, both of Moss’ parents were educators and it was her father that got her interested in science at an early age.

“For fun, we would work math problems and we did a lot of science projects,” Moss said. “I think that interaction with my dad just gave me a real interest in science and math, and especially chemistry.”

Moss had moments where she remembers being treated differently due to being a woman in the STEM field.

“I can definitely think of some instances where people gave me a little less consideration because I was a woman, and I don’t think they did it consciously,” she said. “I do feel like to a certain extent, I had to be a little bit better. But I also just became a little bit more assertive. And I think that helps a lot.”

Now an acclaimed department chair of chemical engineering and a professor at the University of South Carolina, Moss has also done biomedical research, hearkening back to her first interest as a teen. .She wants to be a role model for young women who are passionate about the field.

“I think it’s really good to have women in leadership positions because a lot of people need those role models,” she said. “It means something for them to see somebody who has been successful enough to be in a leadership position and inspires them to, or at least makes them think about ‘I could do that.’” 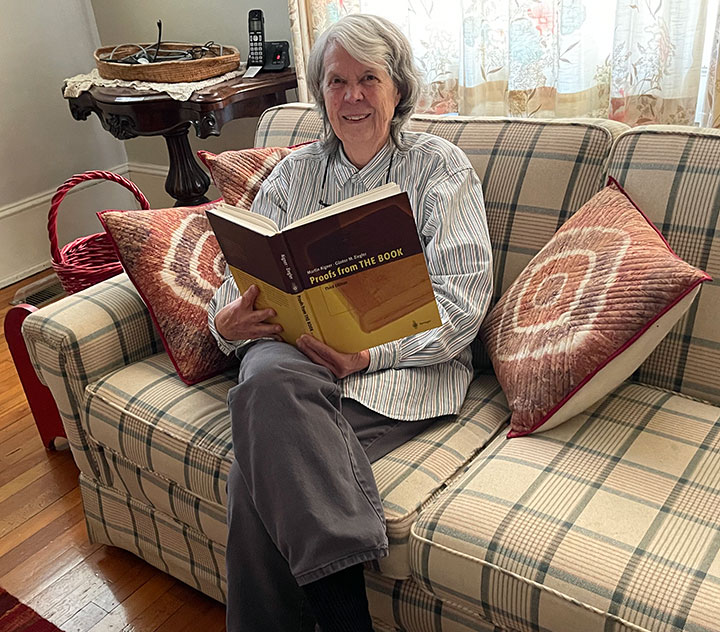 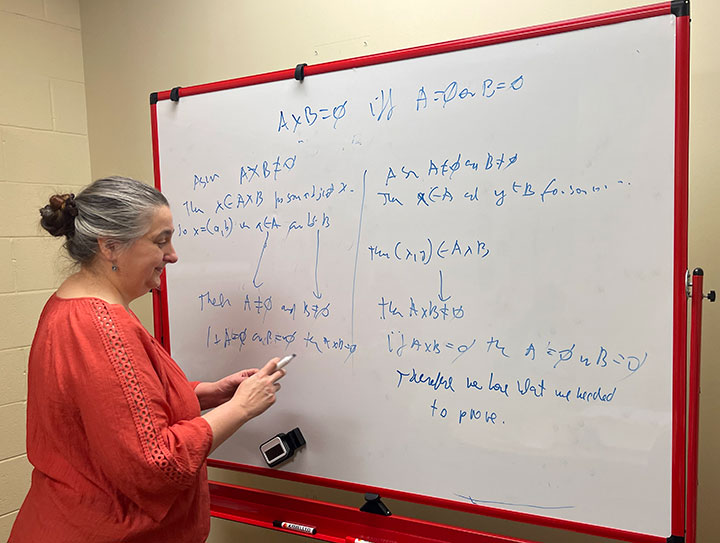 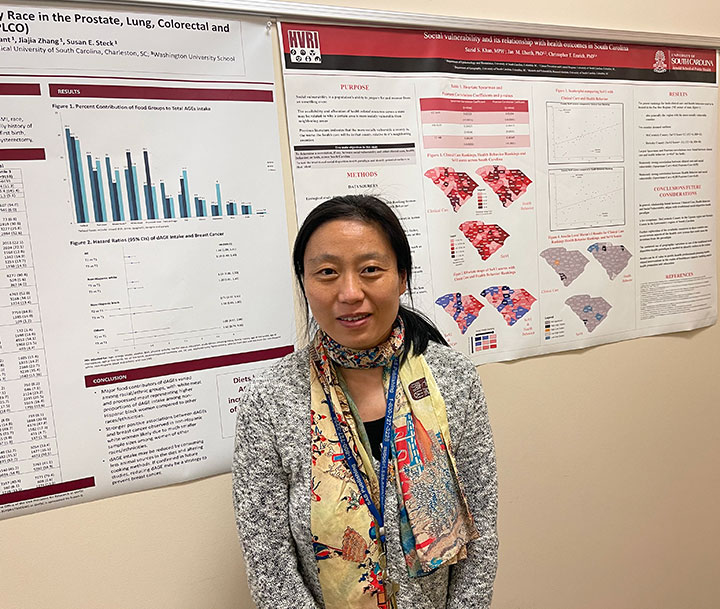 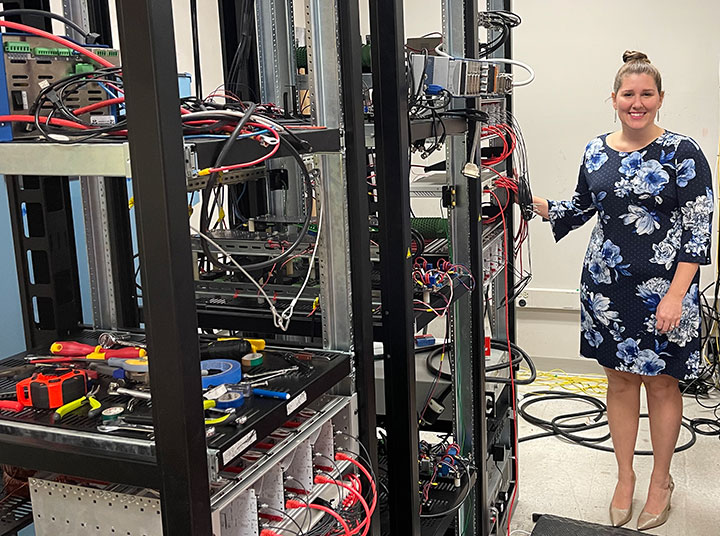 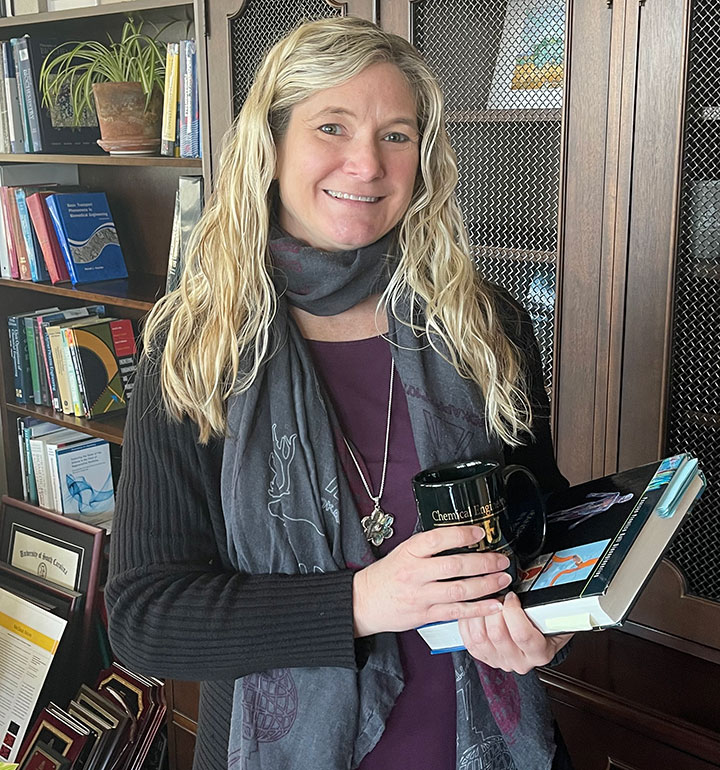 Melissa Moss, the department chair of chemical engineering at UofSC, uses her role to inspire others.