Putin planted seeds for Ukraine invasion in rise to power 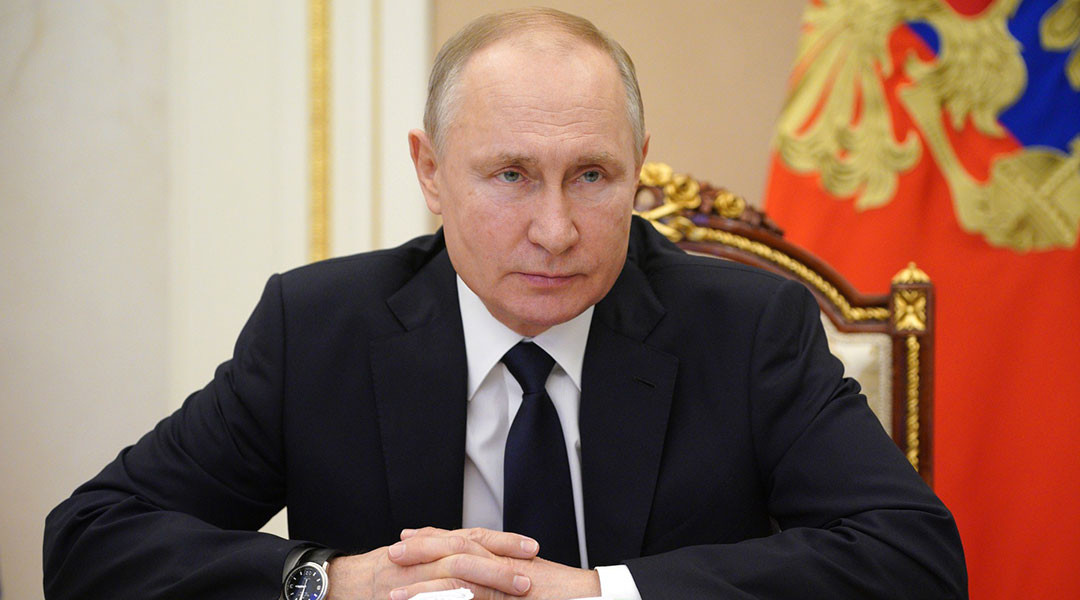 Russian President Vladimir Putin took power for the first time in 1999 and has been the most influential figure in Russian politics since then. His February invasion of Ukraine has drawn international condemnation from democratic nations. Photo courtesy of Wikimedia Commons.

The Russian invasion of Ukraine on Feb. 24 is the largest military attack on a European nation since World War II.

The invasion has sparked an outpouring of bipartisan support in Congress for Ukraine and engaged South Carolina leaders and its citizens in finding ways to resolve the conflict and help fleeing refugees.

“The whole world is in danger,” said Victoria Pershyna, a Columbia speech-language pathologist who grew up in Kyiv, Ukraine. “This war, the barbarian destruction of the cultural and historic heritage of the peaceful country and its people, should be stopped immediately before it’s too late.”

Without provocation from Ukraine, Russian President Vladimir Putin invaded the country in late February, igniting a war that has already cost thousands of lives, raised alarms about destabilization in Europe and heightened nuclear tensions.

Last week at a seminar at the UofSC law school, U.S. Sen. Lindsey Graham called for regime change in Russia as that country’s troops pounded Ukrainian cities with missiles. An estimated 3 million Ukrainians have fled the country. Graham reiterated that call Wednesday after an emotional address to Congress by Ukrainian President Volodymyr Zelensky. President Biden has labeled Putin a war criminal and on Thursday called him a “murderous dictator,” according to the New York Times.

“We find it difficult in this case to find really any overt act of aggression that Ukraine has made toward Russia,” Chelsea Estancona, an assistant political science professor at the University of South Carolina with research focusing on international conflict, said earlier this month.

Russia has been militarily involved with Ukraine since its annex of Crimea in 2014. But, according to the North Atlantic Treaty Organization, this is the biggest military turnout of the Russian military in the Ukrainian region since the annex. Ukraine is known for defending itself and its people in the past, according to Pershyna, and that is clearly a continuing tradition today.

The war and its devastation are reminiscent of an earlier Russian conflict. Between 1994-1996, Russia was at war with Chechnya, once part of the Soviet Union. That conflict was eerily similar to events taking place today, exploiting Russian uncertainty and unpredictability, and causing a global outpouring of questions and concerns from other nations. Then-president Boris Yeltsin declared a ceasefire and a peace treaty was signed, but the conflict simmered.

“This is not new,” Estancona said. But, she noted, that like in any international conflict, “we need to be cautious.”

“Our tendency is to look at this conflict and say ‘we have to do whatever we can to save Ukranian people.’ It’s incredibly noble, and it is the right impulse here,” Estancona said. “But foreign policy experts are weighing costs for things like engaging in a no fly zone.”

“A lot of the things that maybe seem like excuses of ‘why are we not doing more,’ I understand that frustration but I would caution against jumping to conclusions on what that ‘more’ is, without being willing to accept that there may be serious consequences that could come with it,” said Estancona.

Putin rose to power under the guidance of Boris Yeltsin, who served as the first president of Russia, beginning in 1991, after the break-up of the Soviet Union. Putin, a law school graduate and former KBG agent, was prime minister by 1999, polling at just 2%, with apparently little chance of becoming president or gaining power in the country.

Yeltsin was under scrutiny for supporting freedom of the press, disbanding the Soviet parliament, and even agreeing to nuclear arms reductions. Yeltsin fought, and survived, two different impeachment proceedings throughout his terms as president, but unexpectedly resigned his seat in December, 1999, announcing Putin as his interim successor. The following year, Putin was elected president in March.

Four months prior to Yeltsin’s resignation, a series of bombs went off in Russia, killing more than 300 civilians and sparking fear throughout all of Russia. Putin blamed the explosions on Chechen separatists. The explosions were presented by the Russian government as an act of aggression by Chechens.

A fifth bomb was found at another apartment complex, but it never went off. Like the other four bombs, the fifth was a hexogen bomb. Hexogen, an explosive substance, was only available in the Russian military or in a single factory in the country. This led to conflicting theories about whether the government was behind the bombings, or if it was Chechen rebels, as Putin claimed.

The government placed blame on Chechnya, which had just emerged from that earlier conflict in 1994-96, now known as the First ChechenWar.

After the bombings, Russia commenced the Second Chechen War. Putin’s popularity grew immensely during the war, from 2% to over 70% by the end of the year. In August 2000, five months after becoming president, Putin flew into Grozny to declare victory over the Chechen rebels.

His first act as acting president was to end corruption investigations into Yeltsin, followed by a decree to move official elections from June to March. Putin went from a relatively unknown figure to the most powerful man in Russia.

Since then, Putin has been a main player in multiple wars.

“This is a very fragile domestic and border situation,” said Estancona, the UofSC professor.

According to Estancona, Ukraine’s desire to join NATO, among other issues, could have been a final straw for Putin to feel threatened, and ultimately invade. She pointed out the economic and physical damage that will need to be repaired, regardless of the war’s turnout, that will likely last for decades. Most likely, she said, also resulting in an even heavier push for Ukraine to join NATO.

Resistance against the war is visible in Russia, particularly among younger generations. Hundreds of protestors have been arrested for anti-war statements and demonstrations.

Family members and friends of Ukrainians cannot get in touch with each other for days on end and civilians are dying, including children, said Pershyna, the Columbia pathologist. The number of casualties continues to increase as cities are destroyed across Ukraine. People continue to flee their own homes.

“[Putin] wants to build an empire; he wants the whole world to be scared of him; he wants to be an emperor of the world,” said Pershyna. “My question to you: Will the world let him or will the world stop the evil power spun out of control?” 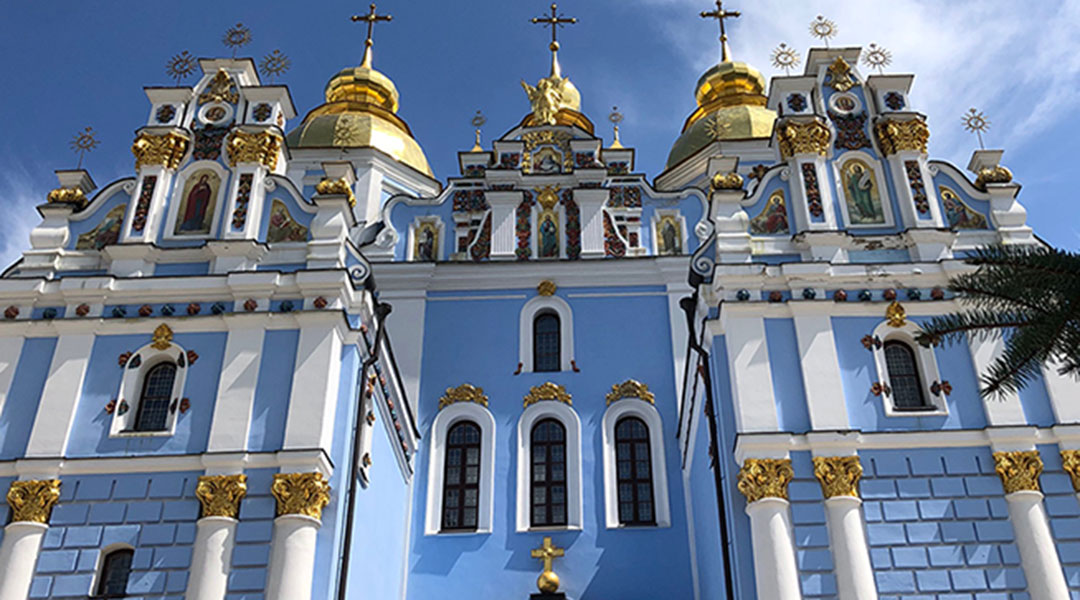 St. Michael’s Golden-Domed Monastery in Kyiv, Ukraine, was demolished by Soviets in the 1930’s but was reconstructed in 1999. So far, the historic building remains safe, but as attacks on Kyiv continue, the threat of it and other iconic structures being demolished again by Russia is at the forefront of citizens’ minds. Photo courtesy of Victoria Pershyna. 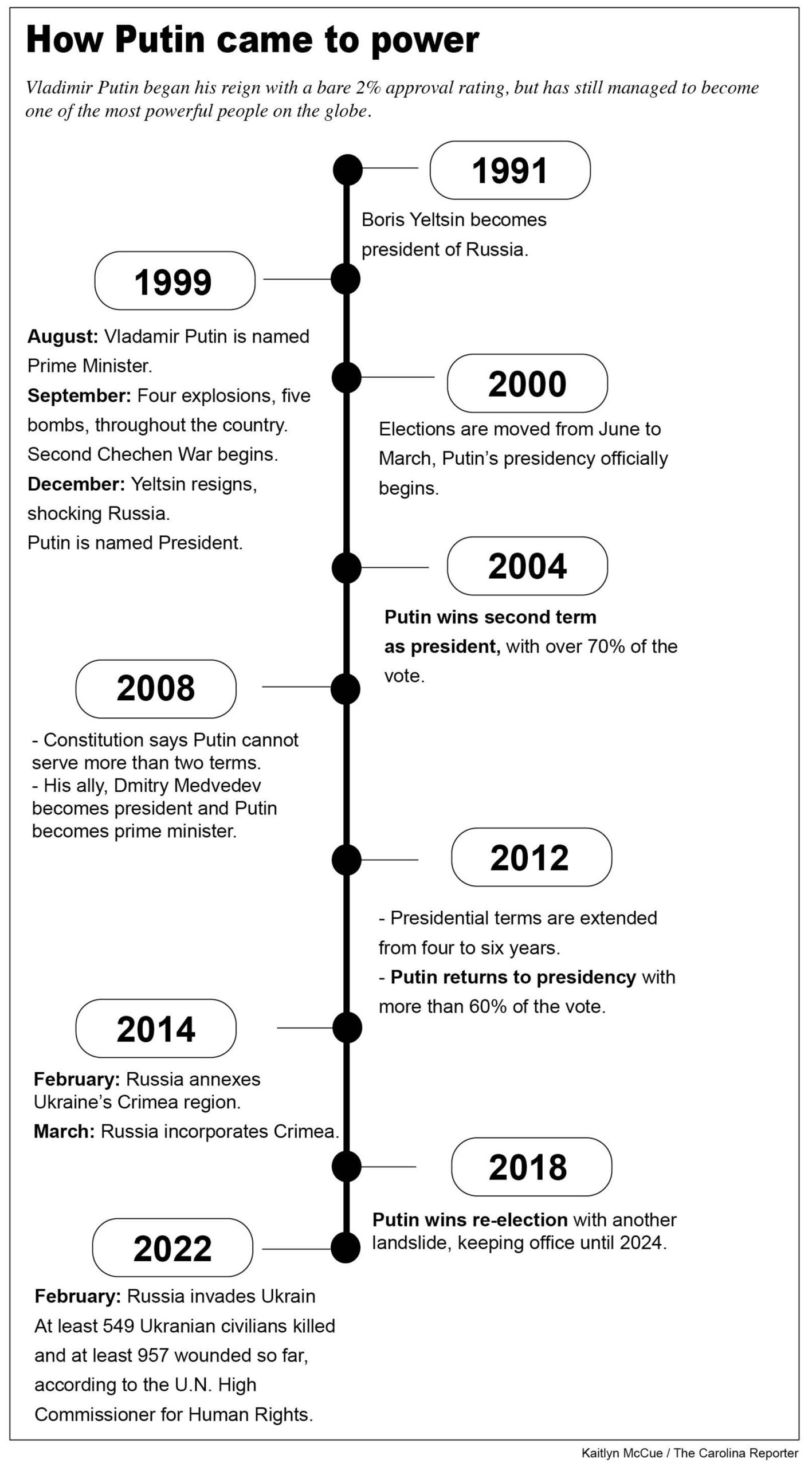 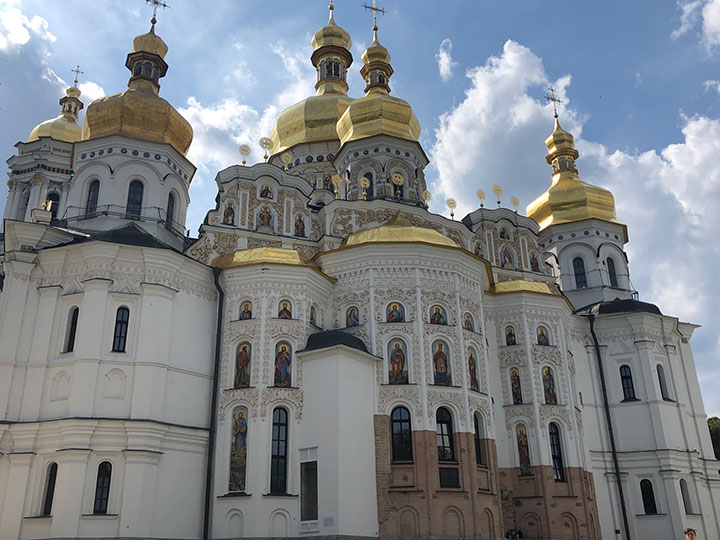 Built in the 11th century, the cathedral of Kyiv Pechersk Lavra is a historic monastery in Kyiv, Ukraine, and stands today. It also serves as one of the largest museums in the city, as well as a Unesco World Heritage Site. Photo courtesy of Victoria Pershyna.