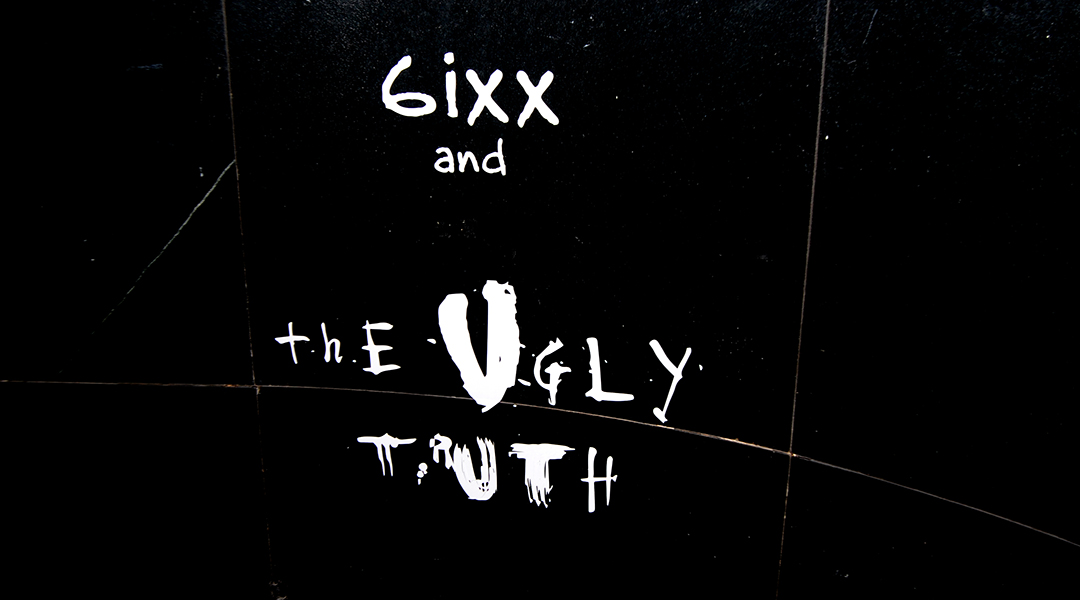 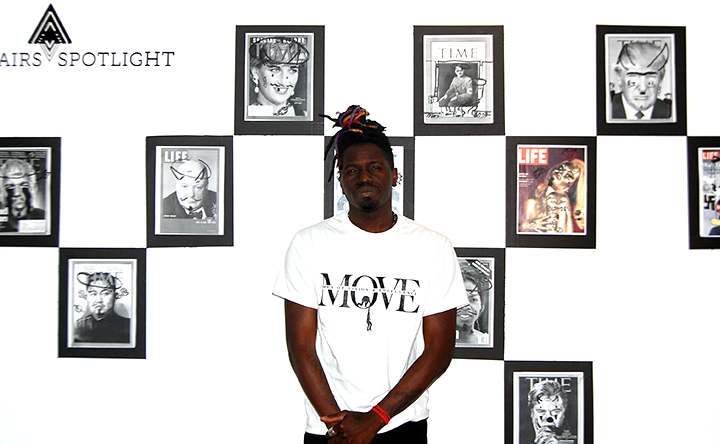 Chapter 2 of Similien’s art exhibit is called “Say hello to the bad guy” and displays famous figures with both devil horns and halos. He says each of these people can be looked at positively or negatively. 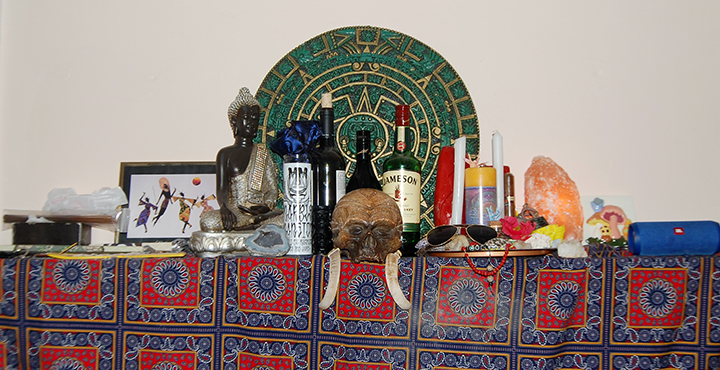 This Haitian altar is on display at Similien’s home. In Haitian culture these items are used to give offerings up to spirits. 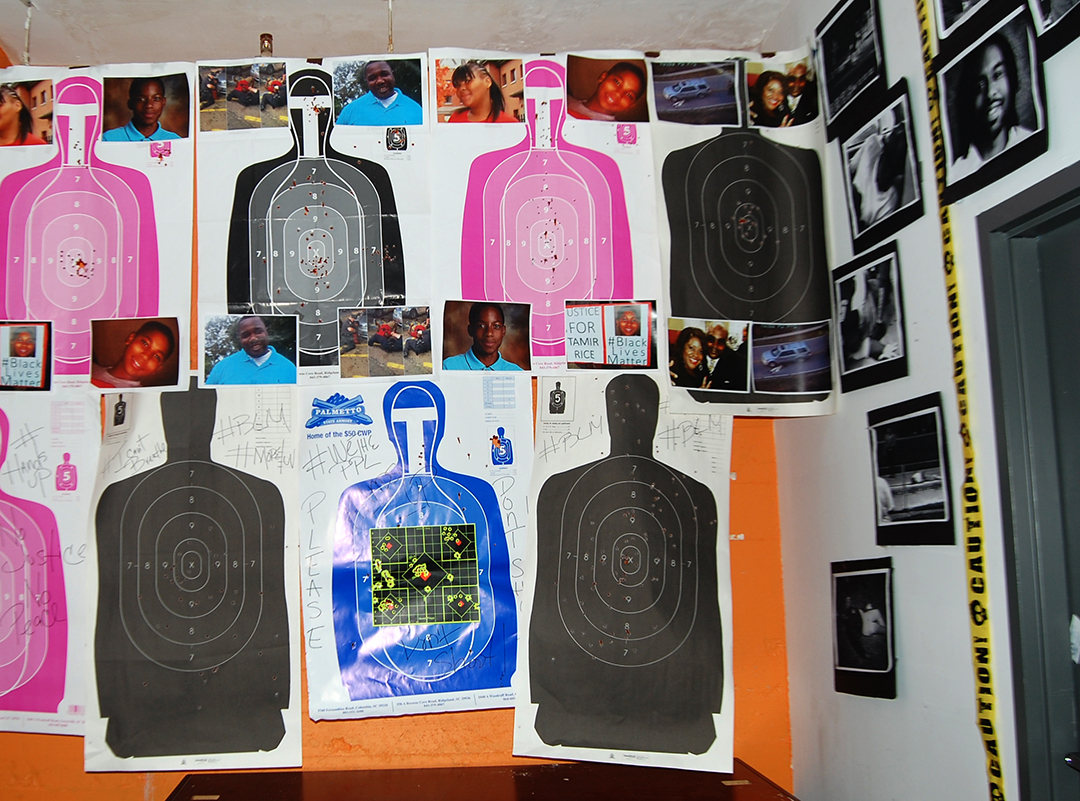 “No protection, no serve” is chapter 1 of “The Ugly Truth” art exhibit. It consists of shooting targets with the faces of victims of police violence in America designed to make the audience look at it more personally. 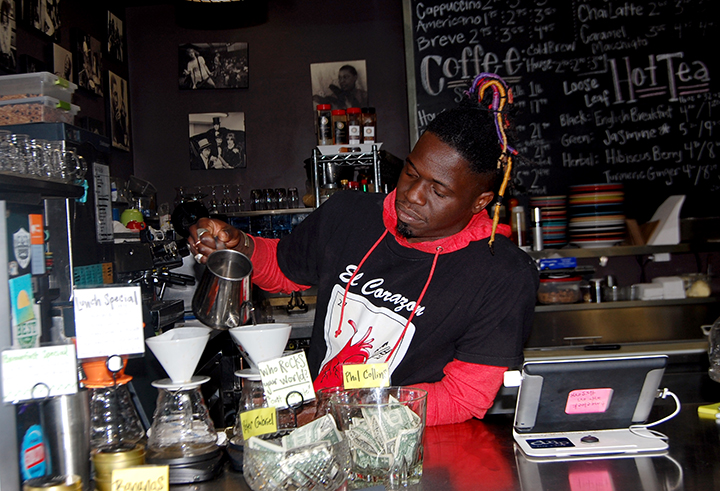 When not working on his art or public speaking, Similien works at the Drip coffee shop on Columbia’s Main St. 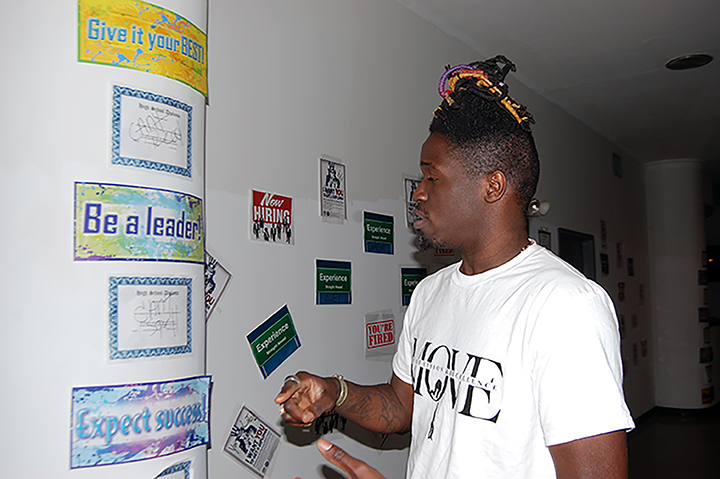 Chapter 4, titled “A degree to nowhere”, focuses on education. “CAN’T READ” and “CAN’T SPELL” are written on empty high school diplomas to represent children that make it through high school, but still can’t read or write. 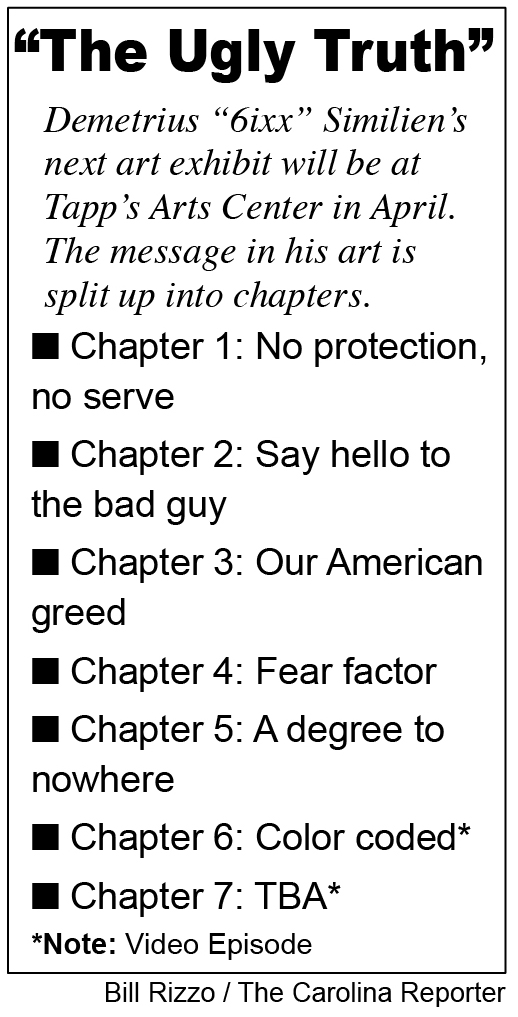 Months before Demetrius “6ixx” Similien was born, his pregnant mother — only 13 years old — leaped out of a boat full of Haitian refugees and swam to shore in Miami to give her son the opportunity to become an American citizen.

“I’m always humbled at her strength and ability to have foresight to do what was necessary to give me an opportunity to grow up as an American,” Similien said. Now an artist who goes by and signs his work with the name “6ixx,” Similien credits his mother with planting the seeds for his professional pursuits.

His nickname comes from the heavily Haitian populated area he grew up in North Miami – 146th Street and Sixth Avenue.

As a first-generation Haitian immigrant, Similien did not have it easy. As a child he would bounce around houses and travel back and forth to Haiti.

In Haiti, he worked in sugar cane fields with his uncles. Similien says he learned the value of hard work and to appreciate life in America.

He continued traveling back and forth to Haiti for about seven years until his mother was old enough to raise him. “I appreciate those challenges. I’m using those lessons and skills to deal with my adult life now,” Similien said.

Similien’s upbringing motivates him politically, and his passion for social justice is visible in all of his artwork.

Similien’s art exhibition “The Ugly Truth” — on display at Tapp’s Arts Center from Dec. 2017 to March 2018, tackles social and political issues through unique art and a series of videos.

“’The Ugly Truth’ is my visual representation of my consciousness of what the world is. It’s a teaching tool to make someone pay attention longer than 30 seconds,” Similien said.

He grabs attention by combining memory elements with his message. Similien uses board game themes, large photos, and writing with a black sharpie to draw attention to his art.

Similien said that his intention with the gallery is to get people to confront social problems that can sometimes be uncomfortable.

“People tend to close their eyes or turn their heads when something becomes unpleasant,” Similien said.

“On the surface the exhibition seems bleak,” said Shigeharu Kobayshi, programs directer at Tapp’s Art’s Center. “But as an artist, I found 6ixx to be quite hopeful.”

The gallery is separated into five chapters that all take on a different meaning but  are all meant bring people together.

One wall has shooting range targets — shot with bullets — with faces of African-Americans who have been shot by police. Similien said that when faces are next to the targets, it draws emotion out of the audience.

Another section of the gallery exhibits photos of famous people throughout history with high school yearbook-style doodles that include devil horns and a halo. The photos include Barack Obama, Donald Trump, Joseph Stalin, Oprah Winfrey and more. Similien explains each of these people can be looked at from different perspectives. They can be revered or hated.

“It was meant to connect people in ugliness,” Similien said. “If I told an ugly truth that was greater than color, religion or socio-economic status, then I can create an opportunity to connect with someone I haven’t before.”

A broken leg and a lost football scholarship made Similien look at the world a different way.

“That injury brought me down to earth. It was through sports where I found confidence,” Similien said. “That injury forced me to redefine myself as a person.”

As a cornerback for North Miami Senior High School, Similien was able to earn a full scholarship to Savanah State University. Then his sophomore year, he suffered a devastating leg injury that required a surgery he couldn’t afford.

Fortunately, the people around Similien supported him. Victoria Bonnet, who Similien calls his “second mother,” and a few other community members chipped in to pay for his surgery.

While in rehab from the operation, Similien discovered he had other skills. “The moment I got hurt was the moment my artistic side started to shine through,” Similien said.

Savanah State rescinded his scholarship, so Similien transferred to Miami Dade College while he continued to recover from his injury.

“Glory lives on the other side of misery,” Similien said.

At Miami Dade, Similien met his mentor, Carlton Daley, who would give him direction in life.

“He gave me a purpose,” Similien said. “He was the first person to tell me you are more than just a body, you’re a brain.”

Similien said Daley was able to get him to apply the work ethic he had for football to school, where he was studying political science.

Daley is the director of TRIO Student Support Services Program, a federally funded initiative that works to guide first-generation students through college. Daley says he challenged Similien intellectually and taught him the values of community service. Similien still volunteers with TRIO as a tutor and mentor.

After a year of hard work in class and rehab on his leg, Similien received a partial scholarship from Benedict College in Columbia for football.

He would go on to graduate from Benedict and get himself a job with the Clinton Foundation and work with TRIO.

Once Similien decided to stop working with the Clinton Foundation, he immediately began to fully devout himself to his art. He decided to move back to Columbia because he “found peace” in the state and had a “good support system.”

Similien’s third installment of “The Ugly Truth” will appear at the Space Hall of Columbia inside of the Tapp’s Arts Center April. Similien says he will announce the exact date soon on social media.

The latest installment of “The Ugly Truth” will include the biggest and “most elaborate” lecture, according to Similien. He says there will be a lecture, video and music to go along with the art.

“I try to entertain and teach at the same time,” Similien said. “I want it to be a celebration of people coming together.”