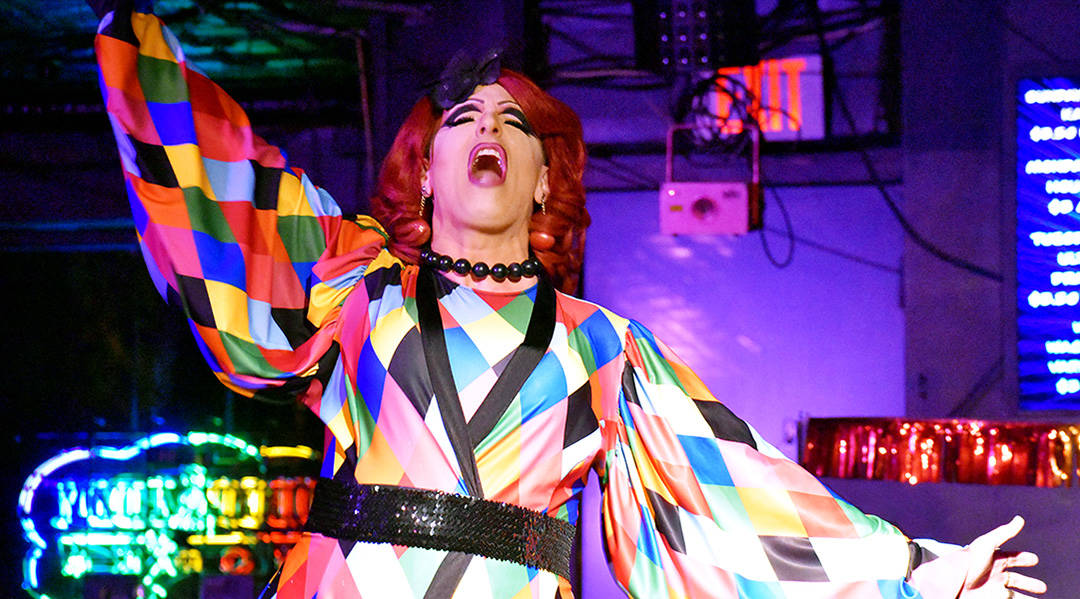 It’s 4:30 p.m. Tuesday at Midlands Technical College. Professor Pat Patterson and his theater 101 students have just begun building a scene in a fictional play as part of an exercise on understanding the job of a producer. 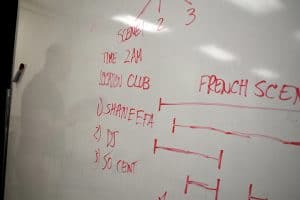 “We’re at the club, at the club at 2 a.m.,” one student suggested. “Because nothing good happens in the club after 2 a.m.”

Patterson laughed and wrote it on the board. The students wove an exciting tale about the life of club-goers in which rapper 50 Cent kills a D.J. for calling him “half dollar.”

Nearly 2 a.m. the next morning at PT’s 1109 on Assembly Street, Patti O’Furniture is closing out the club’s weekly free drag show. She closes the show with the same goodbye she’s used for the last 20 years: “On behalf of me, and my big old balloon-titties, it’s time for me to say tatas!”

A very different sign-off than the “see you all next class” that Patterson used to dismiss his students a few hours before.

“I don’t tell my students that I perform,” Patterson said. “It’s not a secret, but I don’t go out of my way.”

From Pat to Patti O’Furniture

Patterson was a professor long before he created Patti O’Furniture. He began performing drag in 1998 when a University of South Carolina LGBT student group was lacking motivation to fundraise for its annual drag show, “Birdcage.”

“They only needed to raise $500, but none of them thought they could do it,” said Patterson, the group’s faculty advisor at the time. “I told them that if they raised the money, I’d go up in drag and emcee.”

The students had the money the next week.

Patterson, in disbelief they were actually able to raise the money, asked some friends for advice at a Labor Day party. 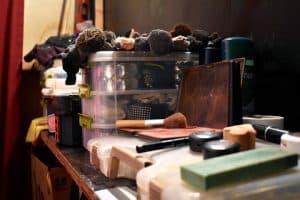 “I was going to go to Party City and get a wig and a Wonder Woman costume, but [my friends] really came together,” said Patterson. “It was like that scene in Cinderella where her dress gets torn up and all the mice run away and come back and make her a dress. All my friends dispersed and came back with different gags: wigs, shoes, boas, makeup – all of it.”

Tommy Starling, a friend of Patterson’s for more than 20 years, was among those making donations. Starling began calling Patti O’Furniture “the yard sale with legs,” and it stuck.

“We were excited to see his comedic take on classic songs while wearing borrowed hand-me-downs,” Starling said, reminiscing on the weekend. “The ideas were fantastic!”

Patterson knew that if he was going to perform, comedy had to be a part of his show. So he decided to emcee the Birdcage as a camp queen. Camp drag is a traditional style of drag presenting an over-the-top, theatrical impersonation of a woman.

When Patterson pitched his original persona, “Krystal Stone: clear as crystal, hard as stone,” to his friends, they immediately shot it down.

“You need a name where when people hear it, they know not to take you seriously,” one friend, Tiffany Cribb, told Patterson.  Cribb thought that Krystal Stone sounded too much like the name of an ‘80s soap opera star; she pitched Patti O’Furniture as a replacement.

Patterson was on board immediately.

“I was like yes, that’s it — it resonates with me in so many ways,” Patterson said.

RuPaul, host of “RuPaul’s Drag Race,” listed it as one of the least creative drag names of all time.

“Guess I’m not gettin’ on that show,” Patti laughed. “What ever will I do?”

Patterson claims Patti wouldn’t have blended with the Drag Race look anyhow. According to him, RuPaul’s contestants are usually female impersonators who present as women; it is a very different look than Patti’s campy style.

“I don’t hide my arms, I don’t do my nails, my boobs are made out of balloons — I’m in on the joke,” Patti said. “That’s been one of two constants in my career: balloon tits, and every dollar I raise on stage goes to charity.” 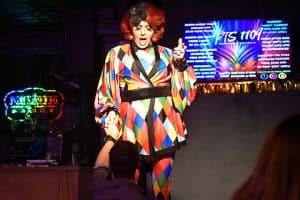 Over his 20 years of performing as Patti, Patterson has raised more than $1.4 million for a multitude of charities and uses the stage to raise awareness for, and give a voice to, important causes.

“We love that Pat throws his passion for helping the community and raising much-needed funds into an art,” Starling said. “His shows give people a break from reality and allow others to come together for the greater good.”

A provocative tool to spread happiness

For Patterson, performing in drag as Patti O’Furniture has always been provocative and a strong political tool that can be used to make the world better.

“My parents are my heroes,” Patterson said. “They were both leaders in the community, but they did not seek to have their names on things. They didn’t seek credit, they just did it. It goes back to that saying [with great power comes great responsibility]; when you’re given a position in your community, you have to use it to leave it better than you found it.”

This is what Patti O’Furniture uses drag to do. As a leader in the LGBT+ community in Columbia, and South Carolina as a whole, Patti sees it as her responsibility to ensure up-and-coming queens don’t have to fight the same battles she did.

“Patti has set a standard for showing compassion and stepping up to take care of the community,” Starling said. “I think her commitment to making Columbia a better, more accepting place has made an immeasurable impact on so many lives. I am very proud of her work and honored to be her friend.”

Starling also noted the daily impact Patterson has on people with his social media movement, #spreadhappiness.

“Pat has been spreading happiness since I have known him,” Starling said. “He has touched so many people with his positive attitude and constant support for our community.”

Happiness has always been the most important thing to Patterson; it’s the reason he chose to do a highly-comedic style of drag.

“I didn’t have a reason for why I chose to do camp for a long time, but then I met Adam,” Patti said, recalling a particularly impactful audience interaction from early in her career. “I made fun of this group all night until there was just one guy left. When I went over to thank him for being such a good sport and apologize for singling him out, he thanked me.”

Adam Whisenant was a newly out member of the gay community who had also just ended his first relationship.

Patti’s show at PT’s was one of the first times Whisenant had gone out after the break-up, and had been doubting his decision to leave. He told Patti that the stage jokes had given him the confidence to hold strong in his decision. The two have remained friends ever since.

Patterson also instills the importance of spreading happiness in his students. At some point each semester, he tells them to go out into the world and just smile at someone. Any stranger, just smile at them.

Patterson does this because, as he tells his students, you never know what another person is going through. The smile that costs you nothing to give could be the only support they receive all day, and it could be just what they needed.

“I think about other people who have influenced me in my life and it’s the people like Adam who told me that I made him smile — that little gesture made all the difference,” Patterson said. “It’s the people who go out there and don’t set out to make life better for people, it’s just inherent in them. What a neat thing it would be if we all did that.” 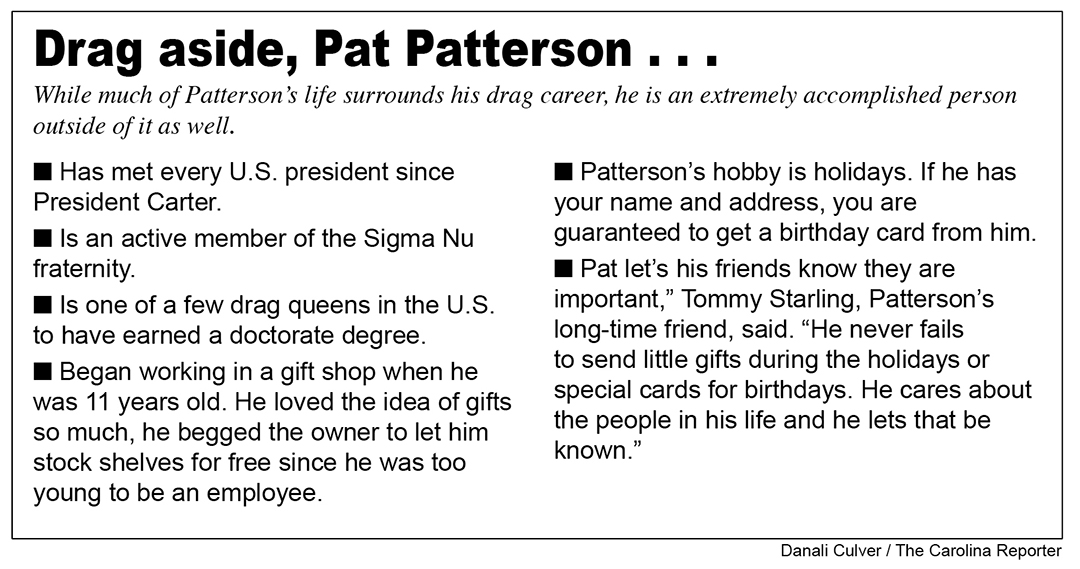 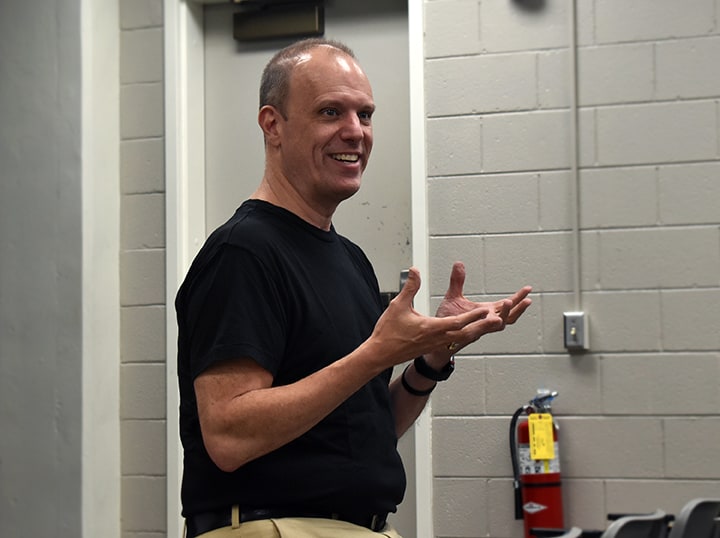 Professor Pat Patterson discussing the ridiculousness of Dorothy’s decision in the Wizard of Oz to use her magical shoes, which could take her anywhere she could imagine, to go to Kansas. 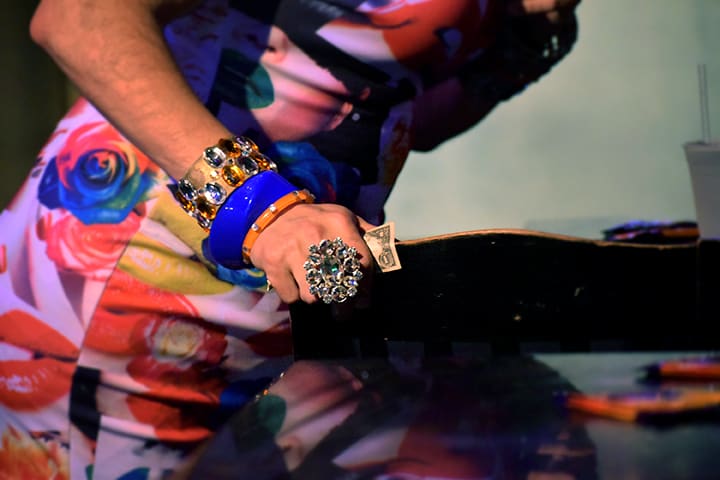 Patti collects tips for a rendition of Meghan Trainor’s “Lips Are Moving,” at PT’s 1109 on Assembly Street. 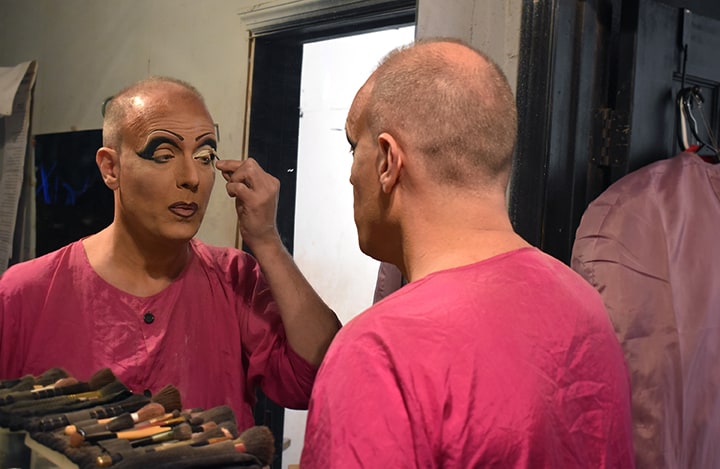 Patterson, in the mid stages of applying his makeup, says that he could do Patti’s signature look in his sleep. If needed, he could put “a face on” in 15 minutes. 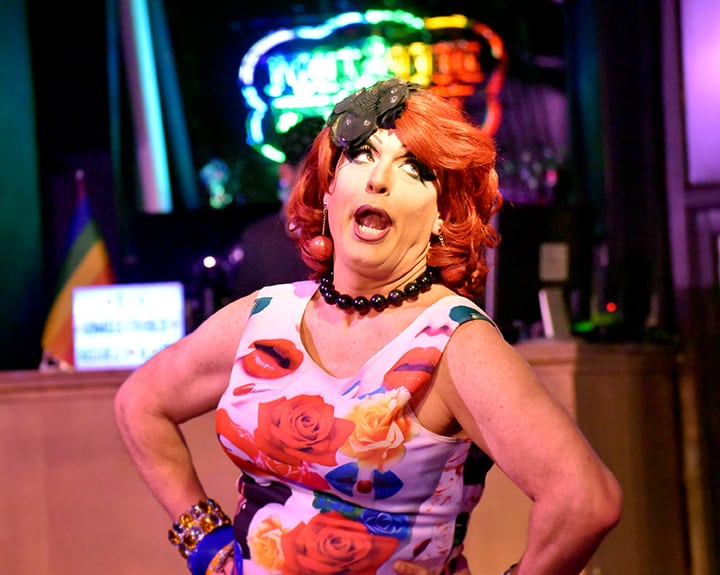 Patti, in the midst of her second set, energizes the club with exaggerated facial expressions and suggestive movements.