When will it be last call in Five Points?

Many people all through out Columbia are taking the opportunity to voice their opinions on what kind of place Five Points should be.

Kit Smith talks to the Columbia Public Safety Committee on behalf of the Coalition of Five Points Neighborhoods on why bars in the city should stay closed at 2 a.m. 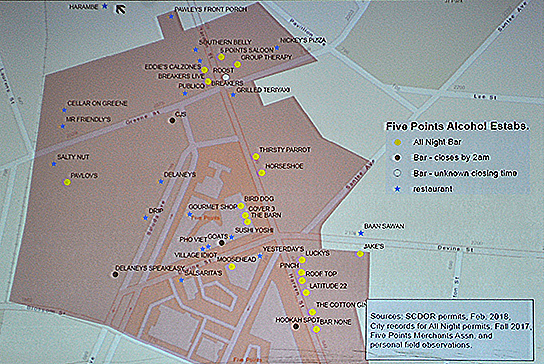 Kit Smith presented a map to show the density of the bars and other establishments in Five Points. 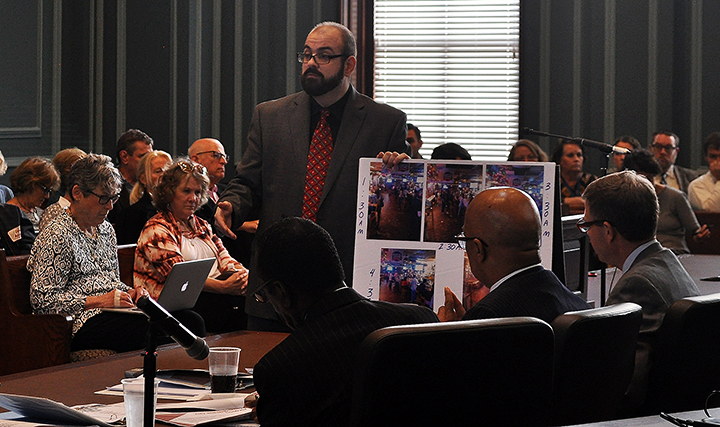 Sean McManus shows the committee photos of Bar None, in order to give an example of what goes on in a bar between the hours of 2 a.m.-6 a.m. 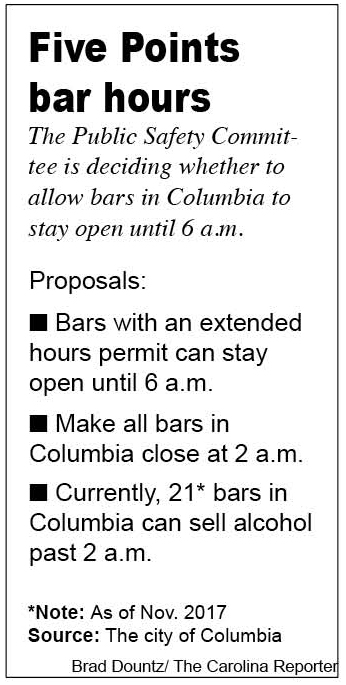 There were calls to be civil as tensions ran high early on in the Public Safety Committee’s Tuesday meeting when discussing whether or not Five Points bars can operate until 6 a.m. Applause came from those in favor of Five Points operating until 6 a.m. whenever a chairman corrected the facts given by those trying to make bars close at 2 a.m.

Some Columbia residents are asking for a push to recommend ending a special permit for some bars that “meet certain conditions” to stay open until 6 a.m. Bar owners, employees and patrons who attended spoke on why bars should stay open later.

Besides when Five Points bars close, one of the other concerns residents have is with the amount of people fitting in to the  barely one square mile of space week after week.

“There are two problems: there’s the density and the hours of operation, and anything that can start to phase out those long hours or reduce the density, I think is a good way to go,” Kit Smith said, speaking on behalf of the Coalition of Five Points Neighborhoods, which is pushing for a 2 a.m. last call.

Sean McManus, a Richland County resident, doesn’t deny there is a problem with behavior in Five Points, but he doesn’t want the majority of people acting responsibly in Five Points punished for the minority’s actions.

“People get hurt when you irresponsibly serve alcohol, so we do need to find out who that is and either put them out of business or get them to stand up straight and do the right thing,” McManus said.

People who live close to Five Points told personal stories of the drunken antics that they say have occurred on their property as well as some incidents of sexual assault they said were due to the late-night alcohol sales. Smith, who lives three blocks away from Five Points, thinks the amount of people in Columbia is one of the reasons bars should closed at 2 a.m.

According to McManus, if the bars close at 2 a.m., then the activities that go on in Five Points between 2 and 6 a.m. will be dispersed to the neighborhoods that surround it because that’s where students live.

Two-thirds of the bars in Columbia that operate after 2 a.m. are located in Five Points. With the majority of Five Points patrons being college students, Smith says it’s more of the city of Columbia’s responsibility to fix this issue rather than the University of South Carolina.

“USC, from my understanding, is very concerned and has worked very hard to try to educate students and provide safe transportation — they’re offering escorts for students walking home. So, I think USC is definitely committed to trying to make it a safer place for students,” Smith said.

McManus, on the other hand, thinks USC should be more involved in the decision with what goes on in Five Points.

“They are the root of so many of these problems. Not because they are a bad institution, but because of the nature of what happens when you shove 40,000 people in a small area,” McManus said.

But for Smith, it just comes down to safety for Columbia residents.

“If they all close at 2 o’clock they would meet the norm of the rest of America. I don’t know of any jurisdiction that says it makes it safer to to leave bars open all night.”

Instead of making more laws, McManus says the city should reinforce the laws they already have. McManus would like to see Five Points increase police presence in neighborhoods or maybe add a late night tax between 2-6 a.m.

There was no vote on the issue that day, but the matter will be turned over to the full city council next month.