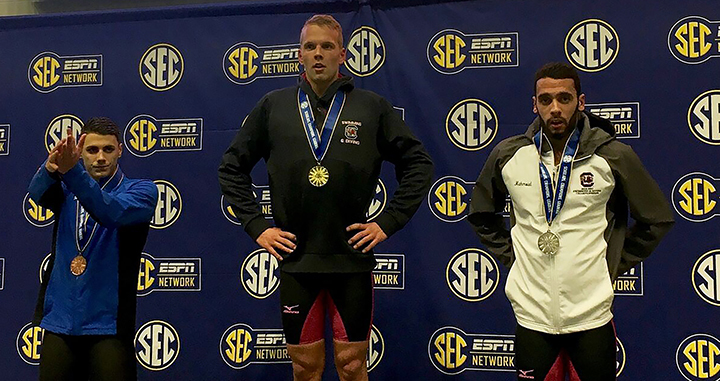 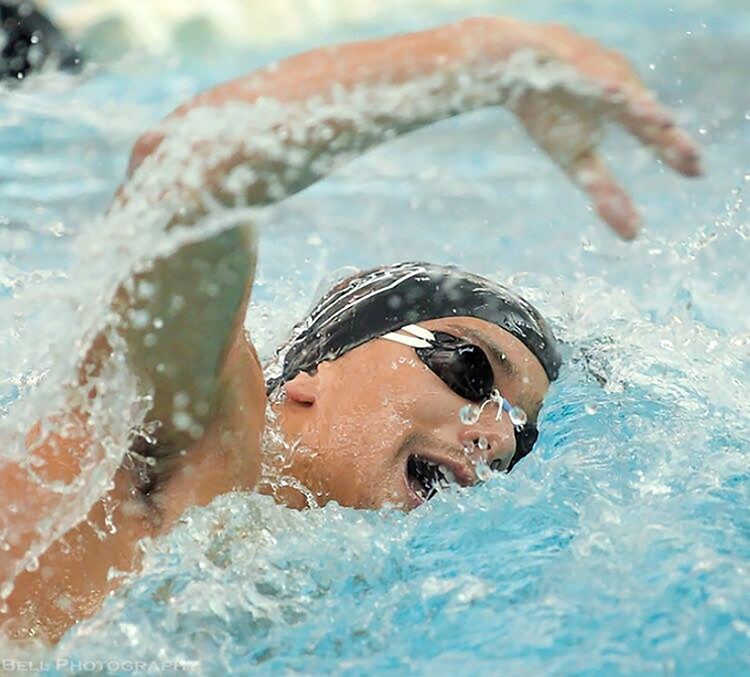 Tomas Peribonio, senior captain of the team, placed seventh in the 200m IM, fourth in the 400m IM and 10th in the mile freestyle. Credit: Jack Smith. 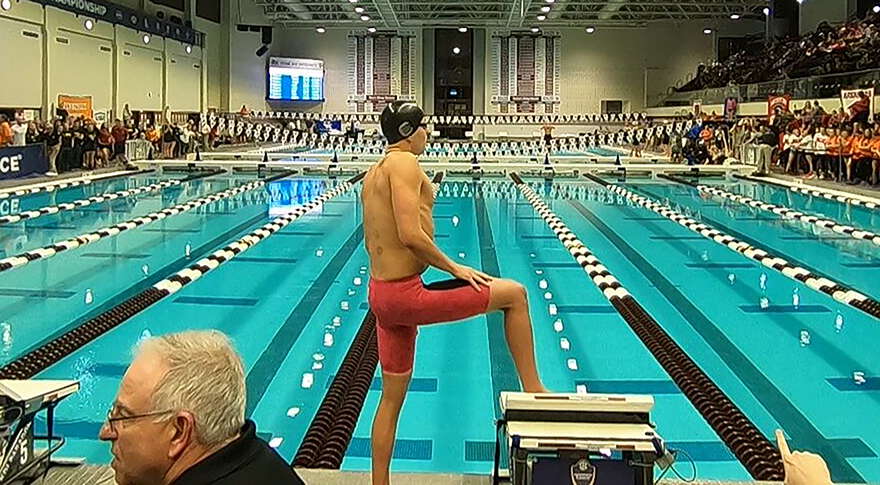 Fynn Minuth prepares for a race at the SEC Championships. Credit: Jack Smith. 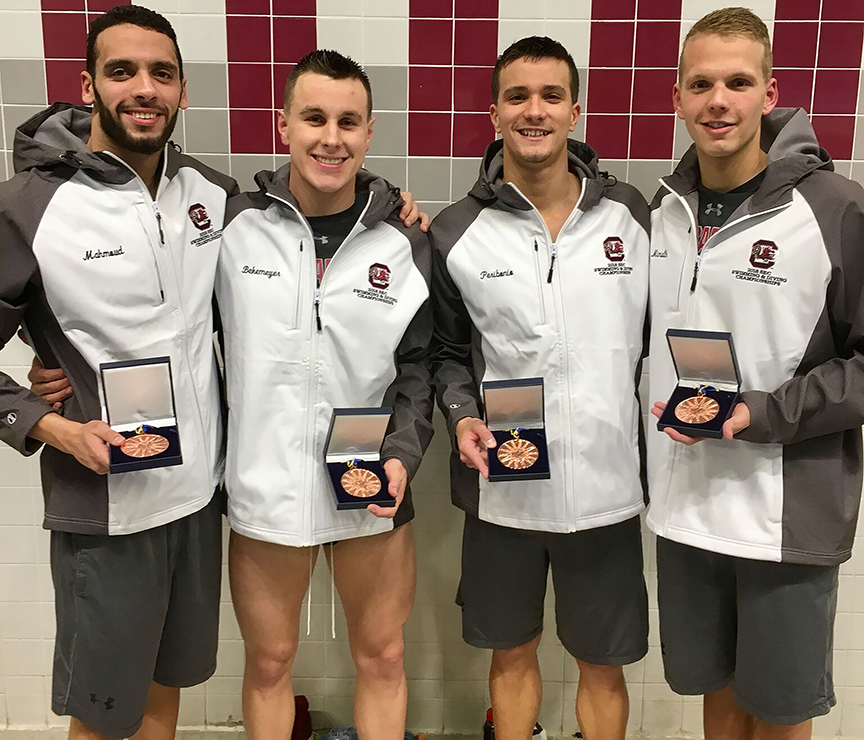 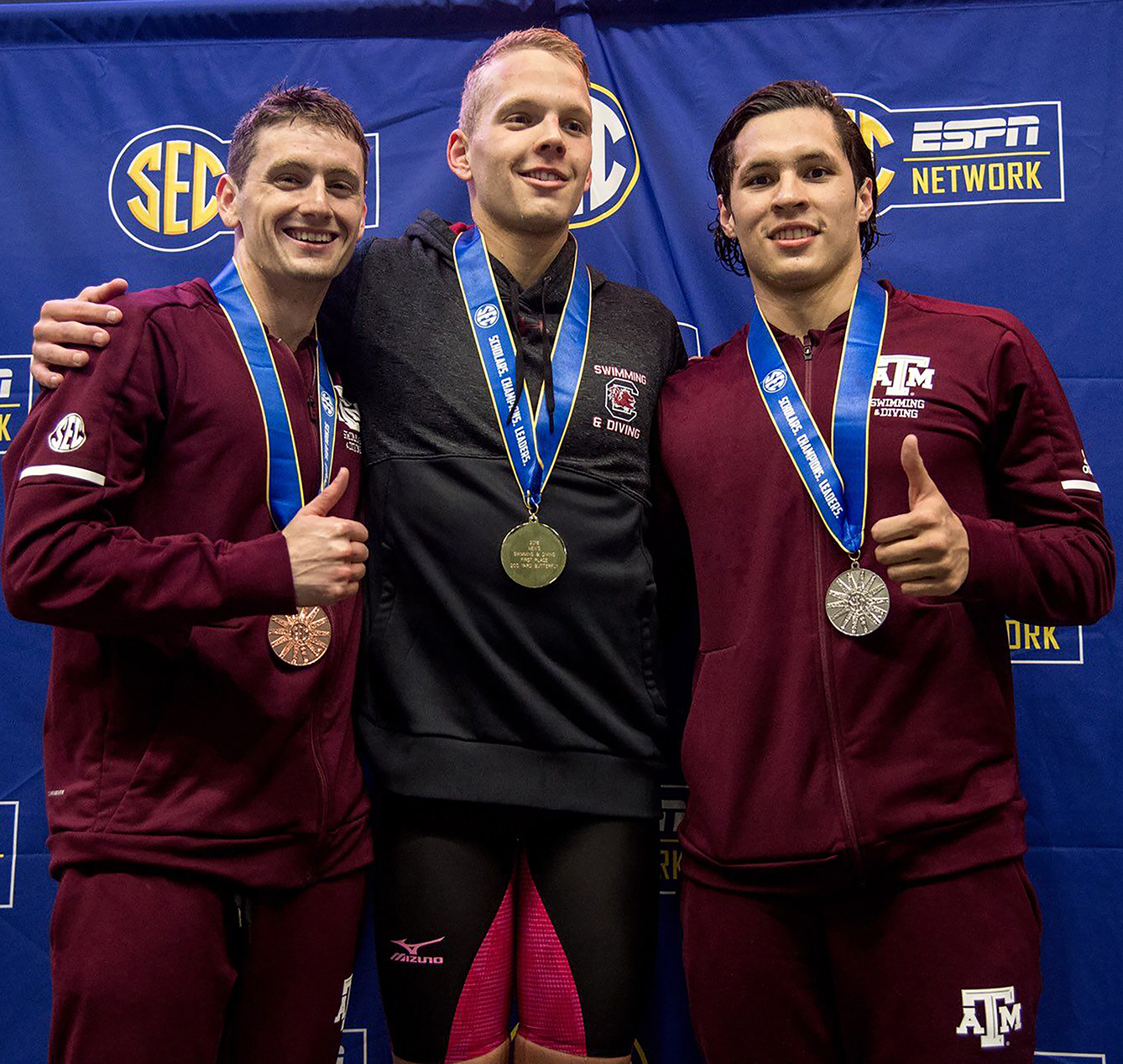 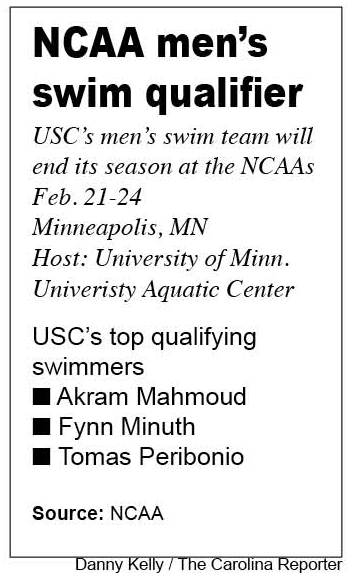 The University of South Carolina men’s swimming and diving team competed at the Southeastern Conference Championships in College Station, TX from Feb. 14-18. The team placed seventh out of 10, with several swimmers having good meets individually as well. Akram Mahmoud, a senior on the team, won the 1650m freestyle race with a time of 14:37.01, the fastest in the nation. This was his third time in a row winning the race.

“It was my last SECs, so I wanted it to be special and score as many points as possible,” Mahmoud said Tuesday. “The team contributed to help get seventh. We scored a lot of points.”

Mahmoud also placed second in the 500 freestyle race, 14th in the 200m butterfly and third in the 800m free relay with Fynn Minuth and Tomas Peribonio.

“I was totally satisfied with how I swam,” Mahmoud said. “The SEC is the fastest and strongest conference in the nation.”

Mahmoud also has Olympic experience; he swam in the 400 and 1500m freestyle in the Rio 2016 Olympic Qualifier.

“I’m pretty happy with my performance,” Peribonio said. “The easiest race was the 4x200m freestyle relay because it was the shortest. The hardest was the mile because it was on the last of five days and I was tired and fatigued.”

“Seeing hard work pay off was nice,” said Minuth. “We’ve been training since the middle of August.”

That’s a lot of training, considering the season runs from mid-September to mid-March.

“The atmosphere was incredible because it was such a tight field,” Minuth said.

“The SECs is different. We rest for a week and a half to two weeks,” Minuth said. We also focus a lot more on speed work.”

The swimmers also had to do something else important in order to improve performance.

“We also shaved our bodies the night before. You usually swim a lot faster with a shave,” Minuth said.

This definitely helped the cause, as the Gamecocks finished seventh in a conference that has seven of the top 20 teams in the nation.

“We’re on the rise,” said Minuth. “We’re definitely improving on a national level.”

The Gamecocks will prepare for the NCAA qualifiers which occur in March 21-24 in Minneapolis. They will have between two and half and three weeks of hard training before resting once the qualifiers inch closer.

“The SECs prepare you well for the NCAAs,” Peribonio said.