Discover the zen of film photography 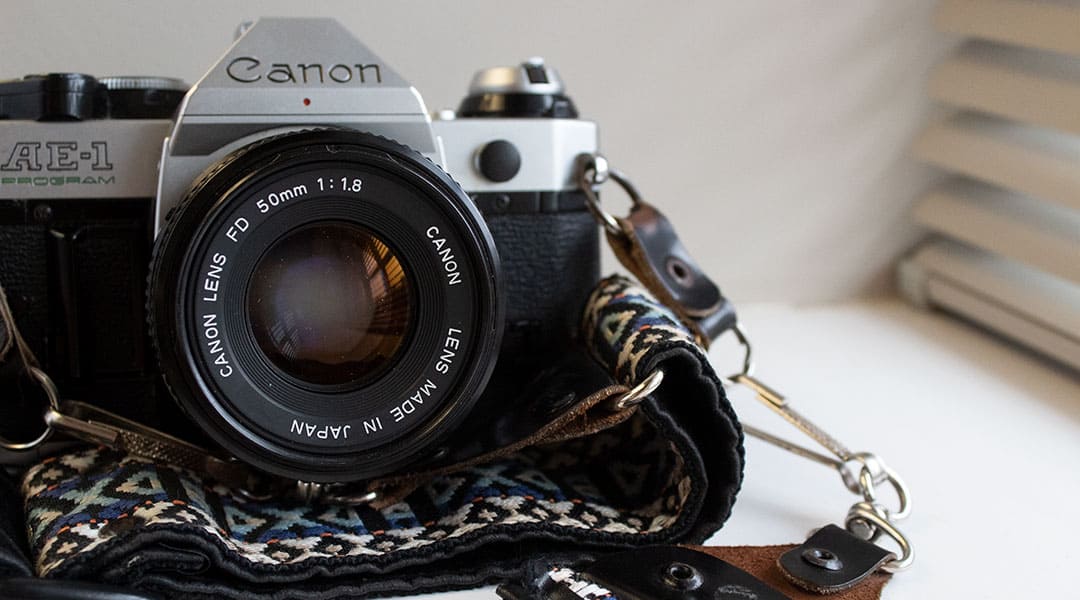 Film photography may seem outdated, but it endures through a few hardcore fans.

For many people born in the 21st century, the past is in black and white.

Before a digital camera was in everyone’s pocket, photographers relied on a much more difficult process to capture the world. Although film photography may seem like a fixture of the past, it has been facing a resurgence in the past few years.

Students like Lilly Strickland, a third-year visual communications student, are learning how to shoot and develop 35 mm film.

“I just started this semester. I’ve never taken any classes in high school with it,” she said. “It’s definitely kind of trendy right now with people our age, like they think it’s cool.”

Despite needing to buy a camera and film for an introductory film photography class, Strickland likes the challenge.

“For me, I see it more as an investment in my future and my skills,” Strickland said. “With it being black and white … that’s where the artistic side comes in.”

Film is like the vinyl of photography. Compared to digital, it is cumbersome, expensive and requires more time to get right. Unlike vast digital memory cards that can hold thousands of large images, a 35 mm film roll usually comes in 24 or 36 exposures, and the photos themselves are hidden until the roll is developed and printed.

Most film cameras from before the 1980s rely almost entirely on manual mode, meaning that the user needs a technical grasp of their equipment to produce usable photographs. Shooting film is difficult, time consuming and is easy to ruin if you are unfamiliar with the medium.

So why do photographers still use film?

Some young photographers like Caroline Frady, a third-year graphic design student at UofSC from Greenville, SC, recognize that the seemingly outdated technology still has value.

“I feel like it’s a little more timeless, like there’s a nostalgic aspect to it,” she said.

Frady owns her own wedding photography business and has started to use a film camera during shoots to deliver a more unique experience to her clients.

“I’ve been able to incorporate film into my pre-existing business, which I think is really unique,” Frady said. “There’s a million wedding photographers and I know that every wedding photographer is constantly trying to find something that makes them different.”

Similar to vinyl albums, film photography has an appeal that can only be described as magic. When the shutter on a film camera is fired, the strip of light-sensitive celluloid is permanently imprinted with an image of the light revealed to it in a fraction of a second. Once processed, the film becomes a tangible negative that can be scanned and reproduced indefinitely.

These images have a look that can be nearly impossible to imitate in digital cameras. The best 35 mm film can produce an image of around 20 megapixels, which can rival modern entry-grade digital cameras, but the real appeal comes from the lack of quality. Hundreds of different kinds of film produce different textures and colors that harken back to grainy 5-by-7 inch photos in a dusty photo album.

The film itself is so sensitive to light and heat that it is common for photographers to store it in a refrigerator. Classic cameras accomplish this task completely mechanically with no autofocus, no LCD screen and, depending on the camera model, no batteries.

The most iconic tool of film photography is the 35 mm single-lens reflex camera, or SLR. It’s named for the camera’s mirror that shows the viewer exactly what will be in frame in the photograph. SLRs have a hinged back to install a canister of light sensitive film that captures the image.

The film is advanced by an arm on the outside of the camera that resets the shutter so another picture can be taken. This mirrored design, despite being over half a century old, is still used in modern digital single-lens reflex cameras, or DSLRs.

This no-frills approach to photography not only makes for a smaller, handier camera, it also helps beginning photographers learn the basics.

Another appeal to film cameras is the low starting cost. Older SLRs, which can be seen as outdated, are available online for less than $100.

Lenses for popular cameras are also plentiful and affordable, allowing new photographers to experiment. Compared to a new DSLR, which starts at several hundred dollars, getting a vintage film camera offers an entry point for photographers without much disposable income.

Even when buying in bulk, it can be nearly impossible to buy film for less than $4 per roll. When including processing and scanning, it costs at least 50 cents to go from pressing the shutter on a film camera to getting a picture. Developing photos can be challenging in a digital environment, as almost all of the small camera stores in South Carolina have gone out of business.

Mike Wojcik, one of the owners of Spartan Photo Center in Spartanburg, is old enough to remember when film was mainstream. He said that although film is still around, digital reigns supreme.

“I agree that it is coming back, but it is not like the heyday,” Wojcik said. “It’s kind of a tough time for the business. It was killed by the smartphone.”

After being started by Wojcik and his brother 36 years ago, the camera store has changed its location six times.

“We think we are the last one in the state,” Wojcik said. “Anytime I look up ‘camera store’ on Google Maps, we are the only one that comes up.”

Besides full-size camera stores, some photo labs that only process film still exist in South Carolina. Many chain drug stores offer services to process film, but rely on third-party processors to perform the service. One disadvantage of using these services is that the negatives are usually discarded after being processed and scanned, leaving only prints of the film.

The film processing offered by these stores is often more time consuming and expensive due to shipping costs, sometimes totaling almost $20 per roll. The process can be less expensive at smaller labs, but it is still costly relative to digital.

Wojcik said he knows that although film is past its prime, the appeal still exists.

“Film photography is one of those things where you need to slow down,” Wojcik said. “Take a roll of 24 and make every shot count. It’s very much like meditation. There is that zen in film photography.”

That extreme care is something newcomers like Frady and Strickland appreciate about film.

“It requires so much more thought, because you only have 36 photos per roll,” Strickland said. “So you have to really think about your images more, whereas with digital you can take thousands.”

Although Frady has found a niche by shooting film, she hopes the practice remains.

“Personally, I would want a roll of film for my wedding day,” Frady said.

Here are a few examples of film photographs taken by modern professionals: 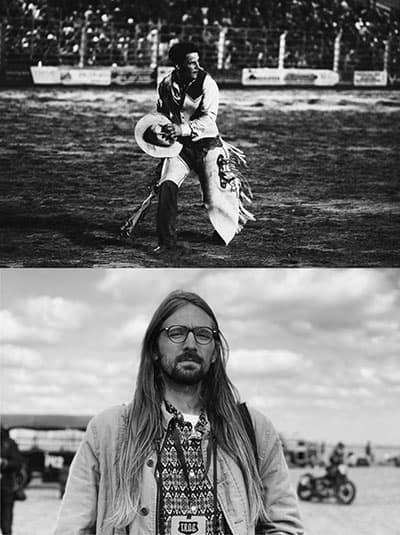 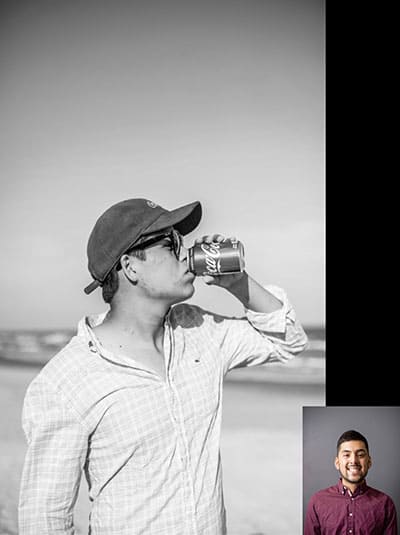 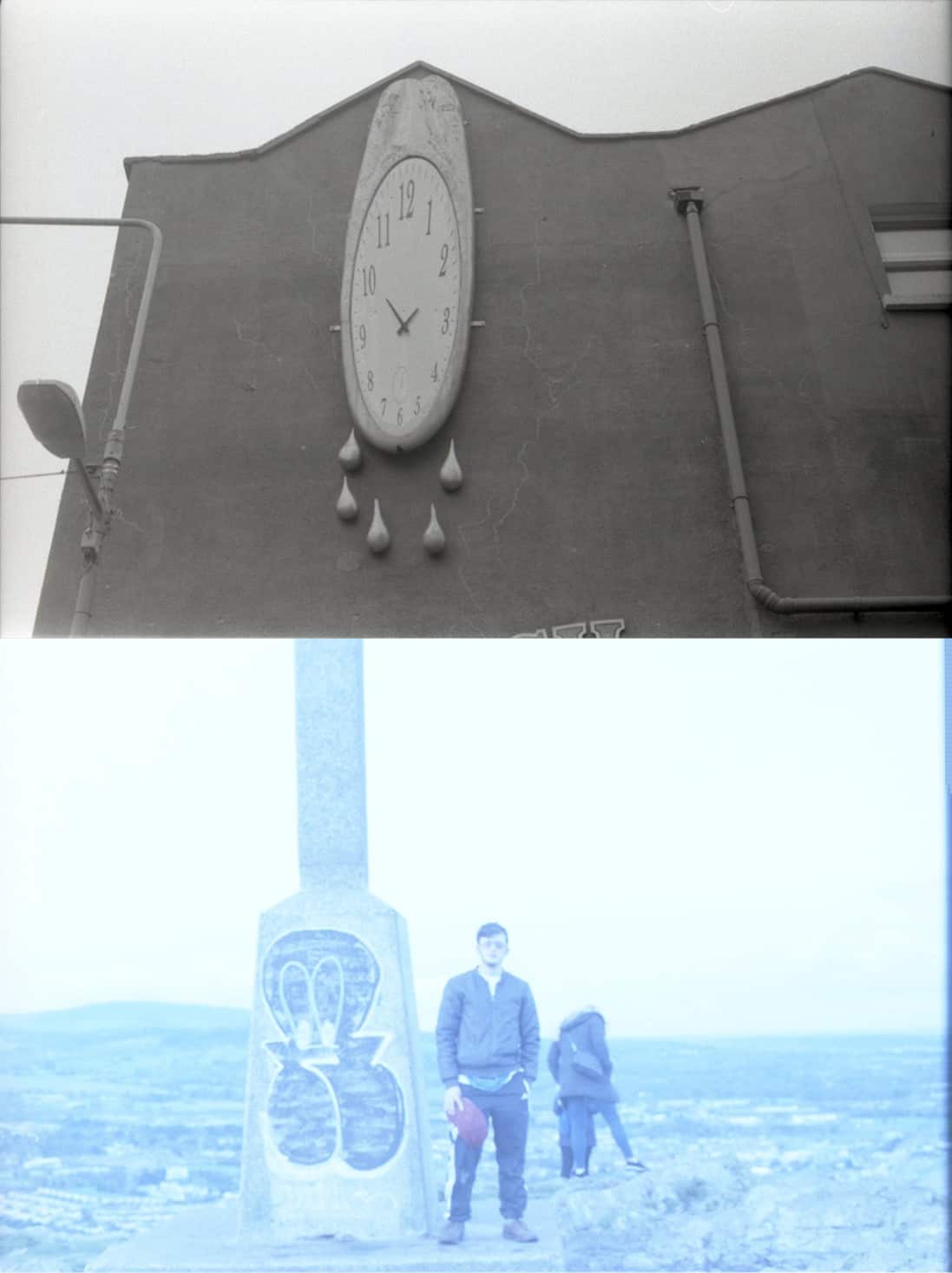 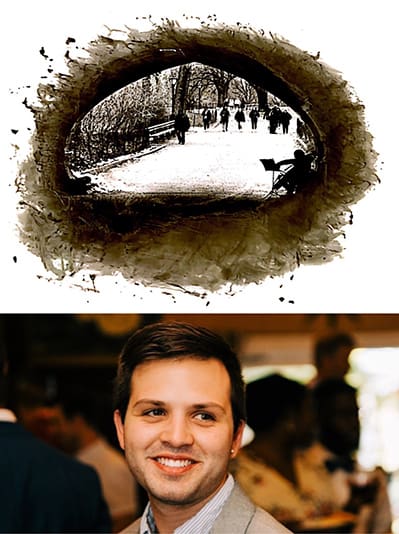 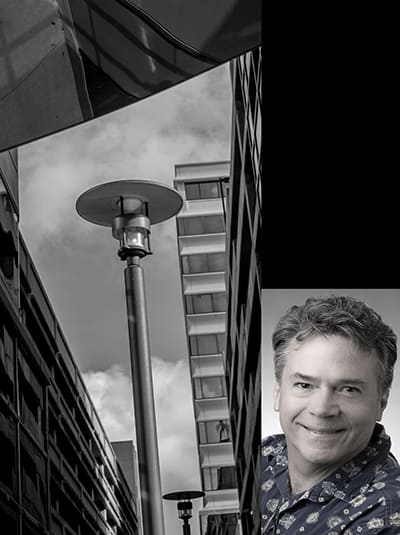 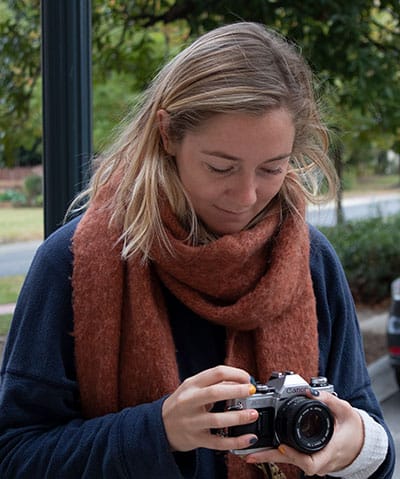 Lilly Strickland, a third-year visual communications major, likes the experience of shooting film. “I see it more as an investment in my future and my skills.” 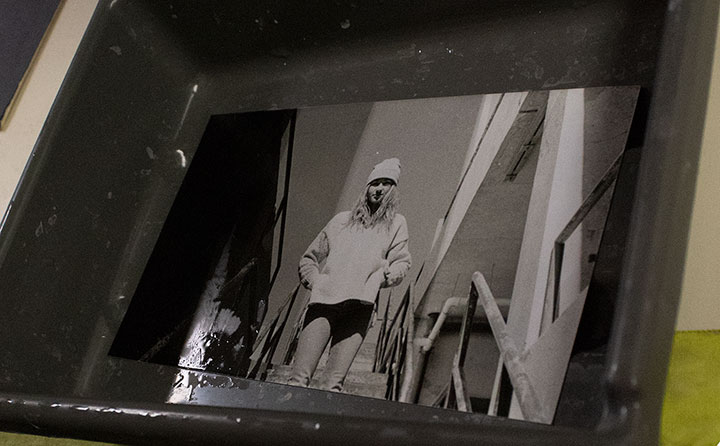 Caroline Frady, a third-year graphic design student, is learning film photography at UofSC. She is using this self portrait to learn how to print and enlarge negatives. 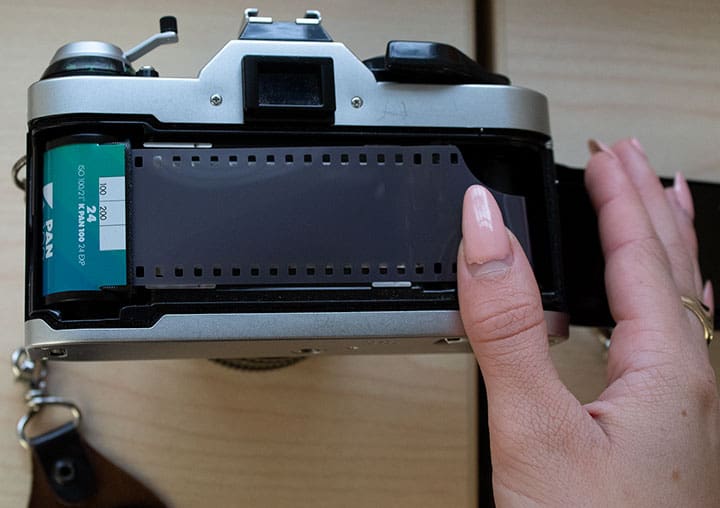 Film is installed in a 35 mm single lens reflex (SLR) camera by hinging open the back. 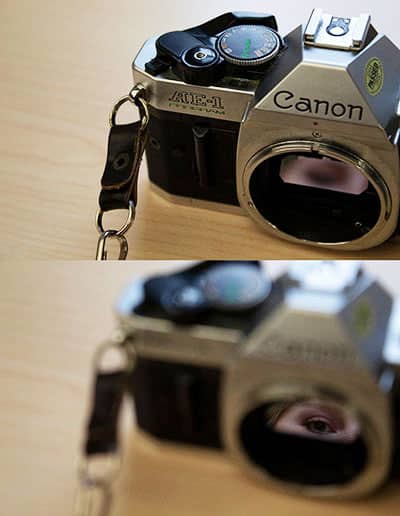 Single-lens reflex cameras get their name from the mirror housed in the body that directs light to the viewfinder. 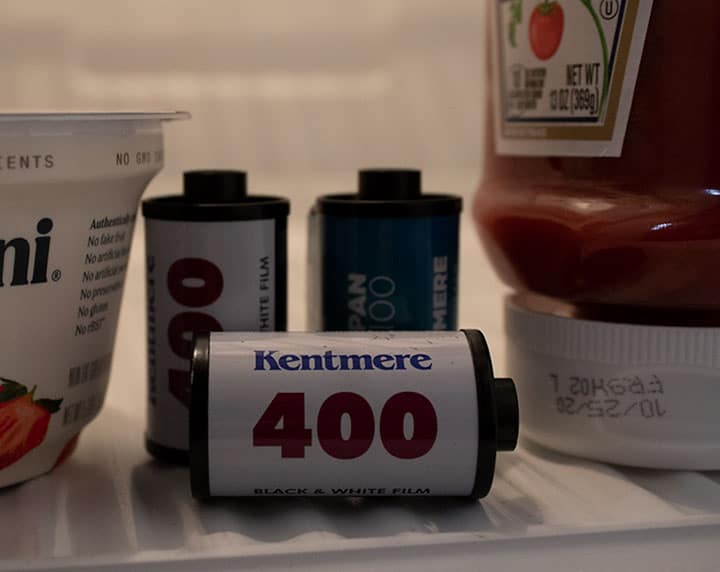 Photographers often preserve the heat-sensitive film by storing it inside refrigerators.