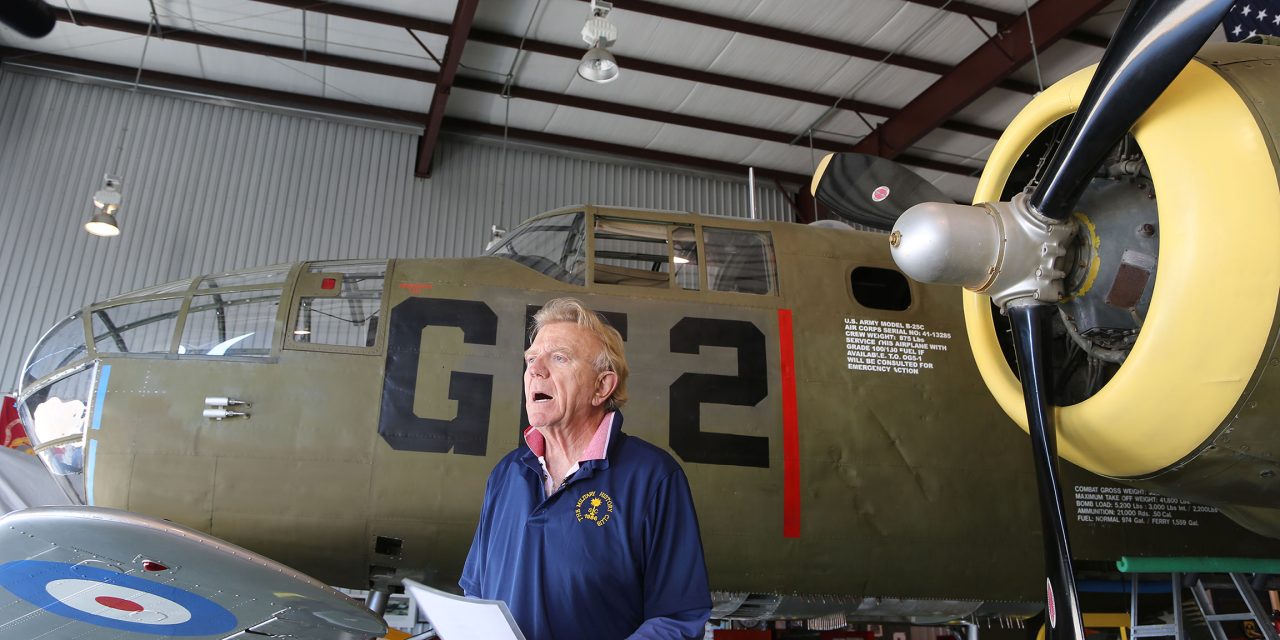 Commemoration organizer Rick Peterson describes the importance of the Doolittle Raiders ahead of the celebration and museum unveiling this Sunday. Photos by Josh Matthews.

Hundreds are expected to gather Sunday in celebration of the Doolittle Raiders, a top-secret band of 80 World War II pilots who trained in the Midlands and helped alter the course of the war.

The celebration at Columbia Metropolitan Airport will feature a history of the April 18, 1942 raid, a World War II USO-canteen type dance and  1940s hit songs performed by The Capitol City Big Band. There will be several aeronautical displays featuring refurbished aircraft from missions during the war.

The event will be at the Skyline Club on the grounds of the old Columbia Army Air base and admission will be free.

Organizers say they also are set to unveil plans for the Doolittle Raiders WWII Museum on the grounds of the American Heritage Foundation in West Columbia.

The Doolittle Raiders were formed in response to the infamous Pearl Harbor bombing on Dec. 6, 1941. Following the attack a Navy captain suggested to President Franklin D. Roosevelt that twin-engine Army bombers could be launched from an aircraft carrier. The President needed a leader for this campaign and he selected stunt pilot James Doolittle.

Doolittle, who rose to become a lieutenant colonel, searched for the crew with the most experience flying Mitchell B-25B bombers. The 17th Bombardment Group was recruited by Doolittle to report to their new home, Columbia Air Army Base.

For weeks the men trained at the base for short-take offs and landings. However, the training was transferred to Eglin Army Air Base in Florida because some community members in the Columbia area observing the pilot training. The mission was classified, making training in a capital city more problematic. Dolittle made the decision to move training to the Florida Panhandle.

After training, the brigade set sail for Japan out of San Francisco aboard the USS Hornet. The Hornet was spotted by a Japanese patrol craft which caused the raid to begin earlier than planned. Over 90% of the aircraft made it through the battle, heading for their refueling point in China. One B-25 bomber was extremely low on fuel and had to emergency land in the Soviet Union. A neutrality pact was already in order between Japan and the Soviet Union, so the U.S. was  unable to repatriate the soldier. But it was reported that the Soviets treated him well.

With the help of Chinese civilians and soldiers, Doolittle and his crew endured the longest combat time for the Mitchell B-25 bomber and successfully executed a major attack on Japan.

James Scott, author of Target Tokyo, a historical dive into the Doolittle Raid, described the damage done by the raid as, “a pinprick.” But the negative psychological effect on the Japanese was immense. Their homeland had been invaded and their emperor’s palace threatened.”

The raid is credited with pushing Japanese Admiral Yamamoto to blunder into attacking America’s Midway Island, a turning point in the war.

The Columbia community has had strong ties with the Doolittle Raiders over the years. In 2009, thousands gathered to celebrate the 67th anniversary of the raid. Five of the nine then-remaining Raiders appeared at the event; all of the original Doolittle Raiders crew have since passed away.

Palmetto trees were planted on Gervais Street in honor of the Doolittle Raiders. A marker was erected at the site which reads: “Symbolizing the strength and endurance of South Carolinians, these Palmetto trees commemorate the Columbia trained Doolittle Raiders whose courage and patriotism in the early hours of World War II rallied a beleagured nation to save Western civilization and all mankind from a descent into another Dark Age.” 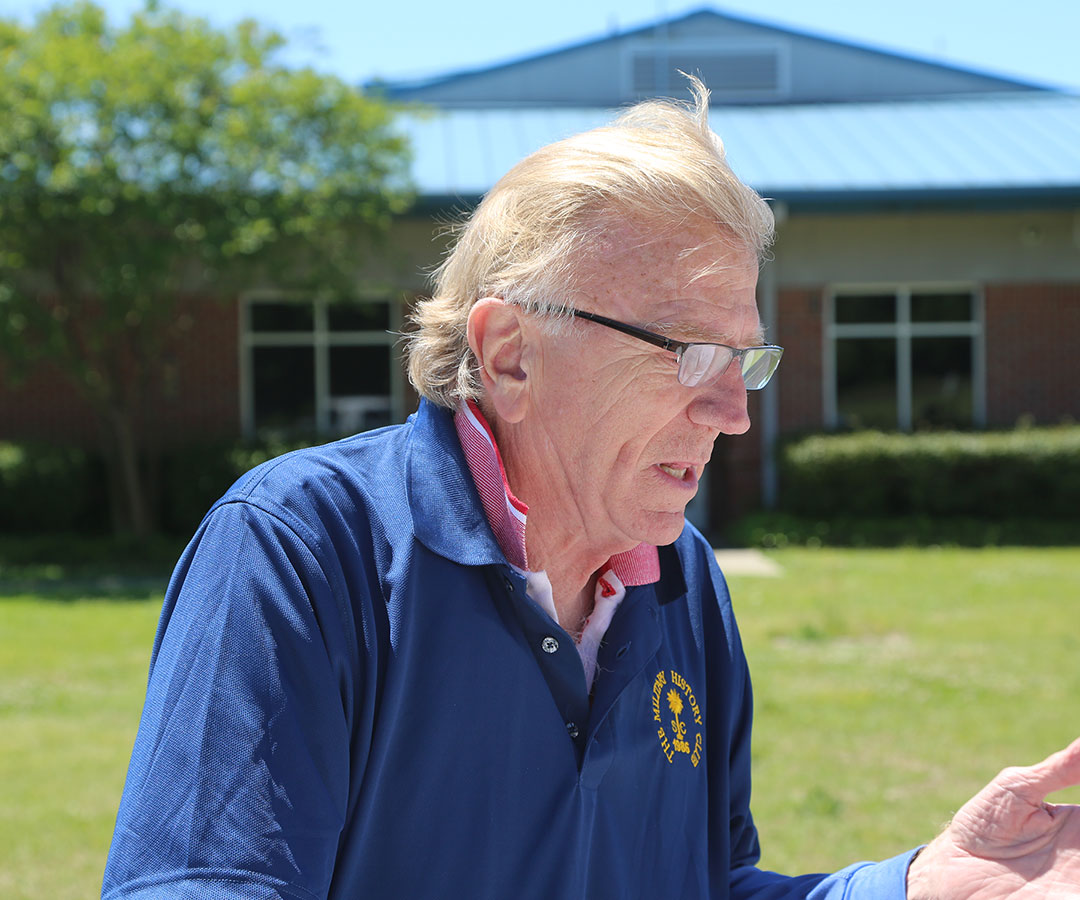 Peterson details the event and the historical background of the Raiders. 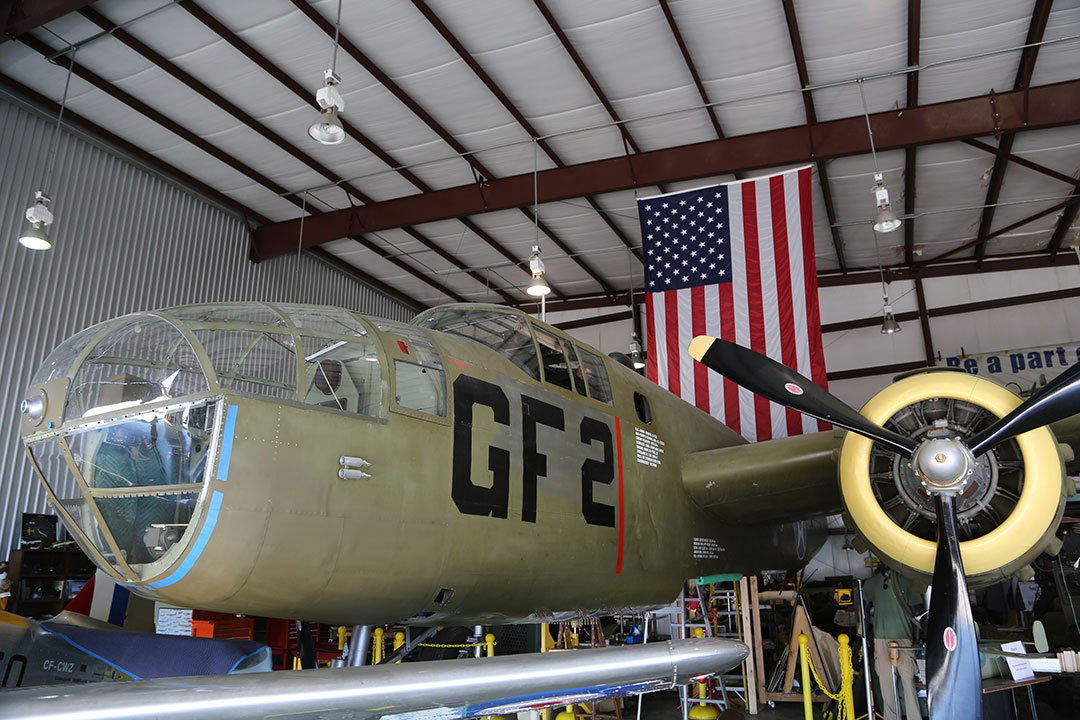 The aircraft is a restored Mitchell B-25C bomber, similar to the traditional B-25 aircraft.